A monk walks past a closed school amid the outbreak of the coronavirus disease in Yangon on Thursday. (Reuters photo)

TAK/YANGON: Thai security authorities in the northern province are on alert along the border with Myanmar after the neighbouring country reported more than 200 new coronavirus cases which compelled the government to close schools nationwide.

Authorities said all border passes in Mae Sot district and roads to Muang districts will be strictly screened.

Details of the operations will be briefed by Naresuan Task Force commander Maj Gen Ukrit Nutkhamhaeng on Friday.

Mae Sot is the main gateway to Yangon, with the Moei River separating the two countries.

The long border in Tak makes it ideal for Myanmar people to cross the river and illegally enter Thailand in search of jobs. 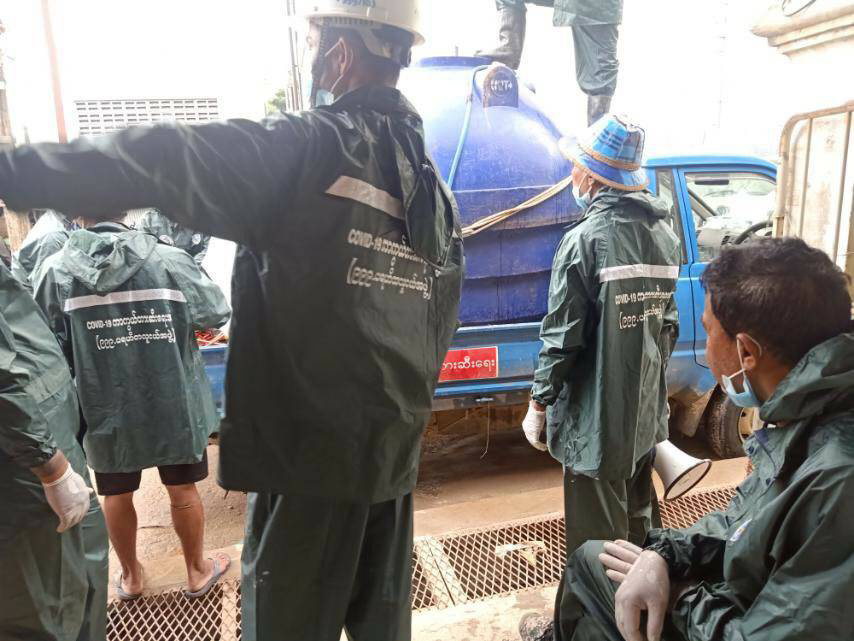 Workers spray public structures in Myawaddy, opposite Mae Sot district of Tak, with disinfectant on Thursday after a new coronavirus outbreak in Myanmar, with the epiccentre in Rakhine state. (Photo by Assawin Pinitwong)

Across the river, Myanmar workers disinfected government and private buildings in Myawaddy after the fresh outbreak.

Myanmar has reported more than 200 cases of the coronavirus since early last week after a month with no local transmission.

Most recent infections have been outside the biggest city, Yangon, and authorities believe they were more contagious than previously seen.

The country closed schools nationwide on Thursday as the number of cases rose, a decision broadly welcomed by parents worried about a rapid spread.

"The students have many years ahead for studying. Taking precautions against the virus is much more important for all of us," said Thin Thin, a Yangon parent.

"Now we have to again take more individual precautions," he said.

With just six deaths and 586 infections since late March, the impact of the coronavirus has been relatively light in Myanmar, compared with Indonesia and the Philippines, which are reporting daily cases in the thousands.

Parent Swe Sin Hlaing said people in Myanmar had been careless and there was no room for complacency.

"We all have to be careful," she said. "If we don't take precautions, the situation would be uncontrollable."

The new outbreak epicentre is Rakhine, about 500 kilometres from Yangon, with most cases tracked to the state capital of Sittwe, where a lockdown and curfew are in place.

Sittwe is also home to crowded camps where 100,000 Rohingya Muslims have been confined since violence erupted in 2012, with limited access to healthcare.

One new case in Yangon on Thursday was linked to Sittwe.

Not all parents are happy about schools closing again, however, and worry about disruptions.