Situation 'back to normal' within 4 weeks

A Myanmar worker waits for a nasal swab test for the coronavirus in Muang district of Samut Sakhon on Sunday. (Photo by Arnun Chonmahatrakool)

New cases of Covid-19 originating at a fresh seafood market in Samut Sakhon are rising as authorities conduct more tests on migrant workers from Myanmar.

The figure was considerably higher than the 516 infections in Myanmar workers reported hours earlier by the Centre for Covid-19 Situation Administration.

Kiatiphum Wongrajit, permanent secretary for public health, expected the caseload to climb in the coming days as results come in from tests being conducted on workers at the Central Shrimp Market in tambon Mahahai of Samut Sakhon's Muang district.

Dr Kiatiphum said authorities are testing 10,000 Myanmar workers and the number will increase to 40,000 in a bid to contain the outbreak within the province.

"We expect many more cases [as a result of the tests]," the top ministry official said.

The market mainly employs workers from Myanmar, with only 10% of the labour force there of Thai nationality, according to the Public Health Ministry.

The Central Shrimp Market is one of the largest wholesale markets in the country, where wholesalers and retailers from other provinces stock up on shrimp.

The first case was a Thai woman who owns a stall at the market. She fell ill on Dec 13 and tested positive for the novel coronavirus on Dec 17.

Dr Kiatiphum said health officials were confident that the new outbreak had originated in the Myanmar community working at the market. The ministry has decided to expand testing to cover as many Myanmar workers in Samut Sakhon as possible, he said. 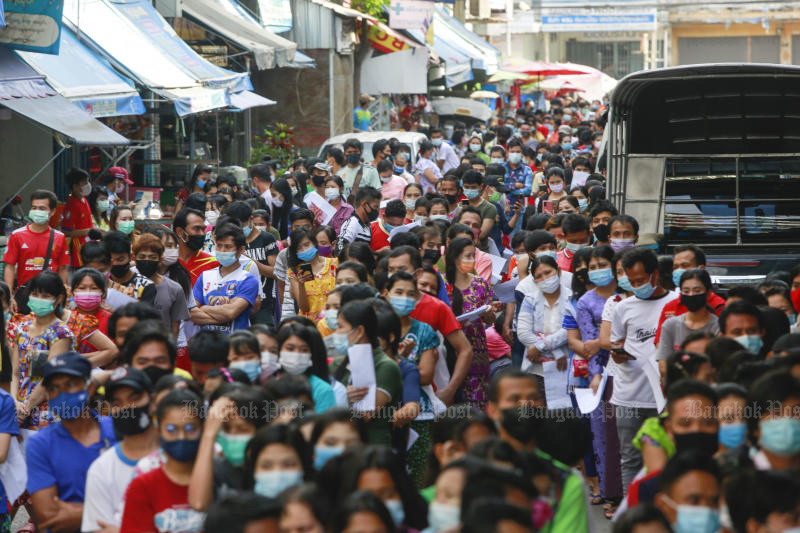 Myanmar labourers wait for their turn to be tested for Covid-19 in Muang district of Samut Sakhon on Sunday. (Photo by Arnun Chonmahatrakool)

The lockdown of the market and some other areas in Samut Sakhon are also aimed at containing the outbreak.

Dr Kiatiphum said the ministry expected the situation would return to normal within four weeks, provided that the transmission rate remains under control.

The virus found at the market has spilled into at least five neighbouring provinces so far.

Opas Kankawinpong, director-general of the Department of Disease Control, said three patients had been found in Samut Prakan, two each in Bangkok and Nakhon Pathom and one each in Suphan Buri and Ratchaburi.

"All could be traced back to the Central Shrimp Market," Dr Opas said.

Dr Kiatiphum said the ministry was confident that the outbreak in the market would not spread across the country because the Myanmar workers are quite isolated.

"The chance for the virus to spread to Thais is limited because they stay in their community and usually do not travel far from where they live," he said.