Rows of beds for incoming Covid-19 coronavirus patients are seen at a new field hospital in a sports stadium on the outskirts of Bangkok on Sunday. (AFP photo)

The increase was marginally greater than the 1,394 recorded on Monday but lower than the record high of 1,767 new cases on Sunday.

Taweesilp Visanuyothin, spokesman for the Centre for Covid-19 Situation Administration, said the 105th death was of a bed-ridden Thai woman, 78, in Bangkok who had hypertension and thyroid disorder. She tested positive on April 3 while being asymptomatic, developed symptoms on April 12 and died at 6.10pm on Saturday.

The 106th fatality was a Thai male vendor, 78, in Bangkok who had diabetes and hypertension. He developed symptoms on April 11, tested positive on April 15 and died at 11.35am on Monday.

The 107th death was of an Indian woman, 86, who had been confined to bed and suffered from a thyroid disorder. She tested positive on Sunday and died at 8.48pm the same day.

The 108th fatality was a Thai man, 30, in Bangkok who had had obesity and visited an entertainment place in Thong Lor area of Bangkok. He first had symptoms on April 4 and tested positive on April 9. He later suffered severe lung inflammation and died at 5.39am on Monday.

Of the 1,443 new cases over the past 24 hours, 1,328 were confirmed at hospitals, 113 detected via mass testing and two were quarantined arrivals from Denmark (a Thai housewife, 43) and India (an Indian man, a 33-year-old marketing manager). 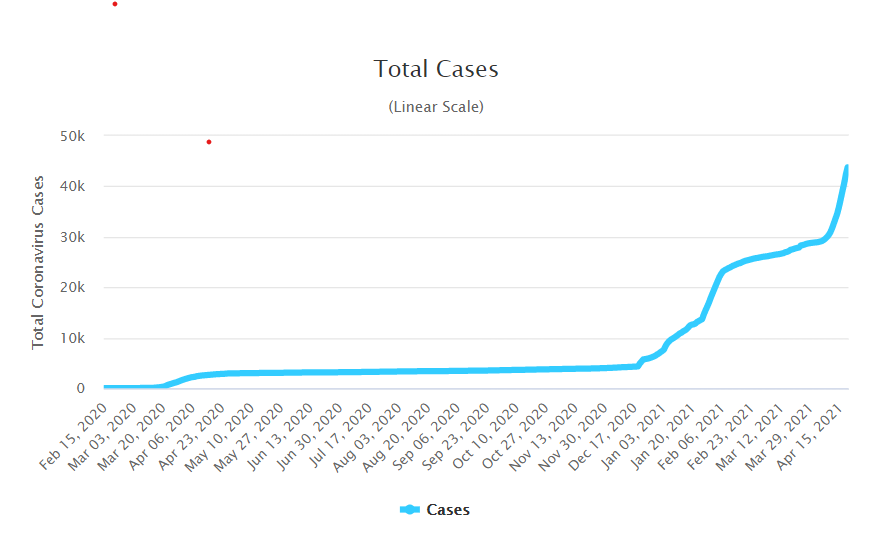 The 1,441 new local infections were reported in 68 provinces, mainly in Bangkok and other central plains provinces, Dr Taweesilp said.

Total cases this month alone rose to 16,322, mostly in the central plains. As many as 16,119 were being treated at hospitals, the spokesman said, overwhelming hospital bed capacity.

Of the existing patients, 223 were in critical condition with 55 placed on ventilators.

PARIS: Real Madrid remain Europe's most valuable football club despite the ever-increasing dominance of the English Premier League, according to a report published Thursday by analysts Football Benchmark.