Workers wait their turn to be tested for Covid-19 in Muang district of Nakhon Ratchasima on Sunday. (Photo: Prasit Tangprasert)

Nakhon Ratchasima city mayor Prasert Boonchaisuk on Monday ordered all 15 schools and childcare centres operated by the municipality to close for one week, until next Sunday, after the infections were detected.

He was referring to the number of new transmissions detected in the province on Monday, and that 35 of the new cases were people arriving from Bangkok.

"Ready for a big fight," he added.

Dr Jade did not go into detail about whether the people from the capital were construction workers,  or not, but he said more labourers were seen on the Mittraphap Highway heading to the northeastern region.

Workers caught in Bangkok and five surrounding provinces are looking for ways to return home after all construction sites and camps were ordered to shut for one month from Monday.

In the northeastern border province of Surin, the number of Cambodians returning to their homes through the Chongchom checkpoint in Kap Choeng district rose sharply over the weekend.

Authorities in Bangkok were on Monday setting up checkpoints on six major outbound roads to prevent workers from leaving the capital city for their home provinces.

Clustered infections among construction workers are the main groups the government is trying to contain. 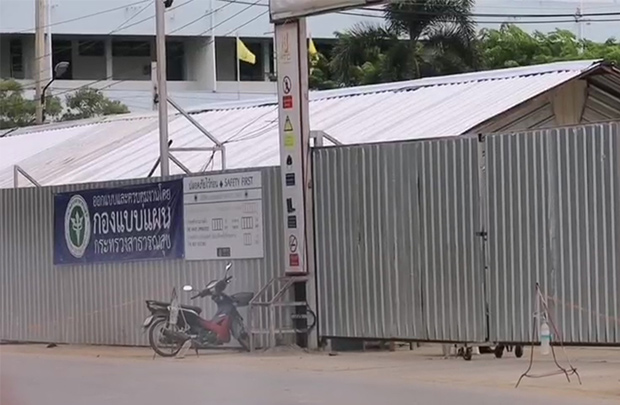 But before the order to close the camps came into effect on Monday, many labourers had already left for jobs in other provinces. For example, six found work painting at Maharat Nakhon Ratchasima Hospital.

Dr Jade said the six workers departed their camp near Hua Lamphong station on a pickup truck on June 20. They were employed to spend five days painting a building at the hospital while living in a workers' camp about 500 metres away.

One of them tested positive on Friday and seven more of their colleagues and their families were also infected.

Nakhon Ratchasima has reported almost 1,200 infections and 17 deaths since the third coronavirus surge began in early April, according to data updated on Sunday. Almost 100 schools across the province have been closed.