Covid-19-infected people with only mild symptoms get medication at a public van station in Thanyaburi district of Pathum Thani, which offers a drive-in service. (Photo: Apichit Jinakul)

There were 124 Covid-19 fatalities and 14,994 confirmed new cases on Sunday, the Centre for Covid-19 Situation Administration (CCSA) announced on Monday.

Sunday’s figures did not include 6,761 positive results from antigen tests over the past 24 hours. This would raise the total to 21,755.

This compared with the 17,784 new Covid-19 cases and 126 fatalities during the previous 24 hours, announced on Sunday, and 128 coronavirus-related fatalities and 20,455 cases reported the previous day.

Of the seriously ill patients, Bangkok had the most cases at 174, followed by 76 in Samut Prakan, 74 in Kanchanaburi, 70 in Nakhon Ratchasima and 68 in Suphan Buri.

According to the CCSA, the 124 people who died were aged from one month to 100 years.

Bangkok logged 13 new deaths and there were eight fatalities in adjacent provinces - three each in Samut Prakan and Pathum Thani and two in Nakhon Pathom.

Other central plains provinces further from the capital had 26 deaths - four each in Nakhon Sawan and Kanchanaburi, three each in Prachuap Khiri Khan and Lop Buri, two each in Uthai Thani, Ratchaburi and Suphan Buri and one each in Ang Thong, Sing Buri, Saraburi, Chon Buri, Rayong and Nakhon Nayok.

The North reported 21 deaths - five in Sukhothai, four each in Chiang Mai and Phichit, three in Kamphaeng Phet, two each in Lampang and Phetchabun and one in Phrae.

The South had 13 deaths - four in Nakhon Si Thammarat, two in Songkhla and one each in Phuket, Phatthalung, Surat Thani, Trang, Krabi, Yala and Pattani. 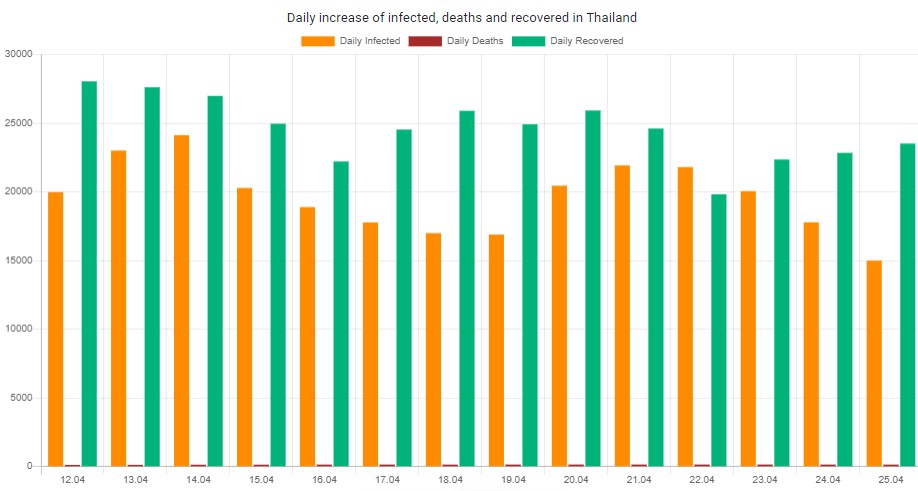 The 14,994 new Covid cases announced on Monday - the fourth consecutive day of declines despite the government's fears of a post-Songkran spike - consisted of 14,932 new cases in the general population, 19 among prison inmates and 43 new arrivals from other countries.

Of the new infections in the general population, 14,904 were confirmed at hospitals and 28 via mass testing.

The 43 imported cases came from 14 countries. They included eight each from Cambodia and the United Kingdom, five from the United Arab Emirates and four each from Australia and Germany.

The accumulated death toll stood at 27,899 since the beginning of the pandemic, including 6,201 so far this year. 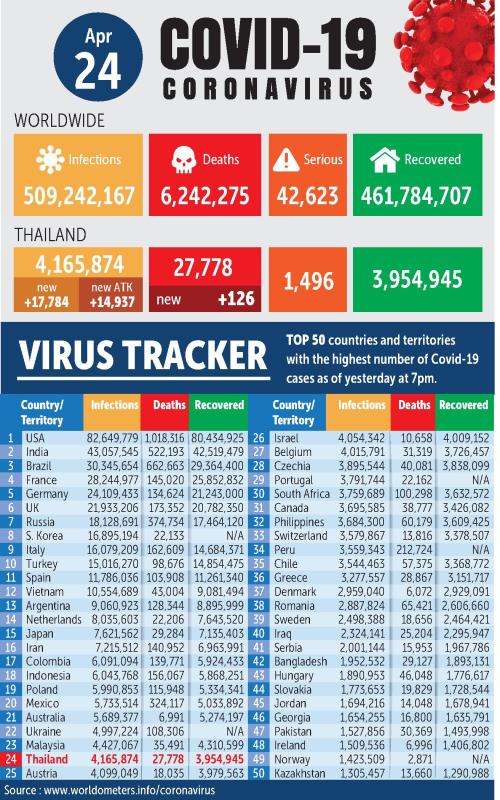 Haze pollution forced schools in Bangkok to close as the Public Health Ministry reported more than 370,000 patients had suffered from illnesses caused by inhaling PM2.5.