The Board of Investment has officially begun accepting applications for long-term resident (LTR) visas for wealthy and high-potential foreigners who are expected to make big contributions to the economy.

The new visa will allow selected non-Thais to stay in the kingdom for up to 10 years, Labour Minister Suchart Chomklin has said. Applications opened on Sept 1 and a PDF outlining the qualifications and application procedure can be downloaded from the BoI website.

The visa offers a range of tax and non-tax benefits to attract new foreign residents, technologies and talents to stay or work in the country longer, he said.

Eligible applicants are those who have at least US$1 million in assets and investments in Thailand, and retirees aged 50 or older who have an annual pension or a stable income.

The third group is remote foreign workers who want to work from Thailand while being employed by well-established companies overseas. However, they must be employed by a company that has recorded sales of at least $150 million over the previous three years — a qualification that many aspiring digital nomads might not be able to meet. 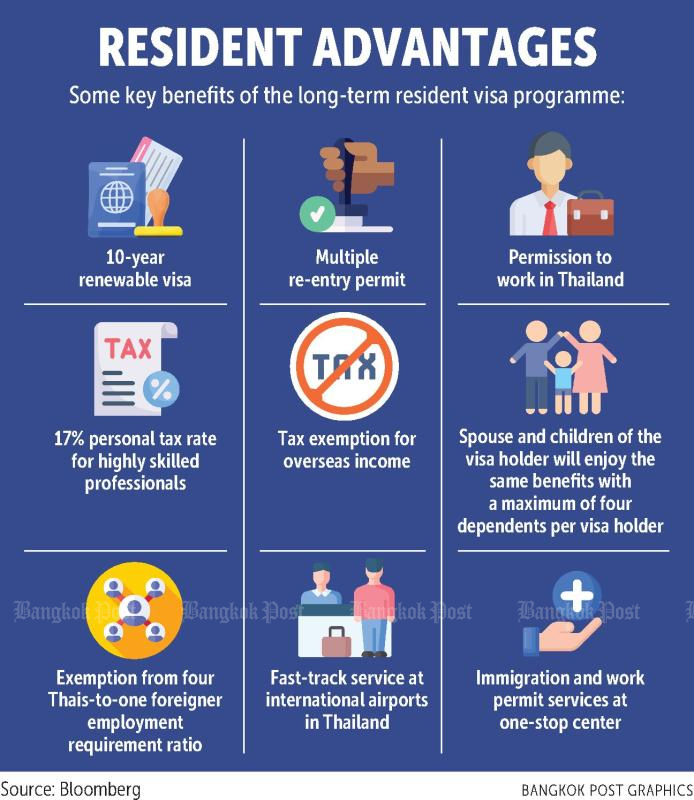 Spouses and children under 20 years of age will also qualify for the same visa, he said, adding that each LTR visa holder can have a maximum of four dependents.

The LTR visa holders will have privileges such as a 10-year renewable visa, fast-track service at international airports in Thailand, a one-year report to the Immigration Bureau instead of every 90 days, multiple re-entry permits, permission to work in Thailand and a 17% personal tax rate for highly skilled professionals.

The government has set the target of attracting one million wealthy or talented foreigners to the country over the next five years, said ML Chayotid Kridakon, an adviser to the prime minister.

The visa initiative could generate economic activity equivalent to about 1 trillion baht annually by way of investment and the purchase of properties by the new entrants, ML Chayotid said.

While wealthy expats already had access to a “pay to stay” visa programme under the Thailand Elite Card, the new initiative will spare professionals from dealing with one-year work, retirement or marriage permits that often require multiple trips to government offices, lawyers and fixed deposits in local banks.

The Joint Foreign Chambers of Commerce said the new visa regime will make Thailand an attractive place to work and buy a second home for global citizens.

“Work permits and visas have been the biggest obstacle for all investors in Thailand for over a decade and LTR offers a solution,” said Vibeke Lyssand Leirvag, chairwoman of the Joint Foreign Chambers of Commerce in Thailand.

In a related development, the Ministry of Labour will seek cabinet approval to extend the operations of service centres issuing certificates of identity (CI) to workers from Myanmar for another two months.

He said officials in Myanmar were working with the ministry’s Employment Department and advised that about 100,000 Myanmar nationals working in Thailand still do not have certificates of identity.

On receiving the certificates, they can submit them to seek permission to stay in Thailand from the Immigration Bureau within a given time, and they could work in the country until Feb 13, 2025.

Note: An earlier version of this story stated incorrectly that officials were seeking cabinet approval for the long-term visas. The application system is already in place.