A vacant house in a police compound will be used as a shelter for 95 illegal Rohingya migrants after local Muslims in Nakhon Si Thammarat province refused to allow them to be housed near their communities. 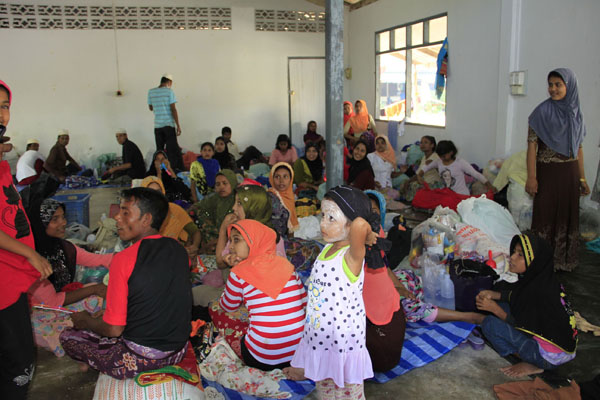 The 95 illegal Rohingya migrants are confined within the compound of the Hua Sai police station in Nakhon Si Thammarat province on Wednesday. (Photo by Nujaree Raekrun)

Local authorities had planned to accommodate them at other locations, but Thai Muslim residents in Hua Sai district opposed the idea.

Nakhon Si Thammarat governor Peerasak Hinmuangkao therefore ordered Hua Sai municipal officials to use a vacant house in the police station compound as a shelter. The Rohingya would receive humanitarian aid pending a decision on their future, he said. Further assistance would be provided by the Ministry of Social Development and Human Security.

The Rohingya were rounded up at a road checkpoint in Hua Sai district on Sunday while traveling in a convoy of many pickup trucks.

Municipal workers fumigated the police compound house to kill mosquitoes and placed it off-limits to the public to prevent the possible transmission of malaria from the Rohingya to local communities. Temporary toilets and lighting would be installed, and tap water, he said.

It was reported that four members of the Rohingya group had died at the sea off Thailand's Phangnga province after waiting for four months aboard a boat for a chance to go ashore. Three more died after landing from suffocation, blood infections and diarrhea.

Police are investigating reports that a local human trafficking cartel is transporting Rohingya through Thailand to Malaysia and charging each illegal migrant 40,000-50,000 baht per trip. 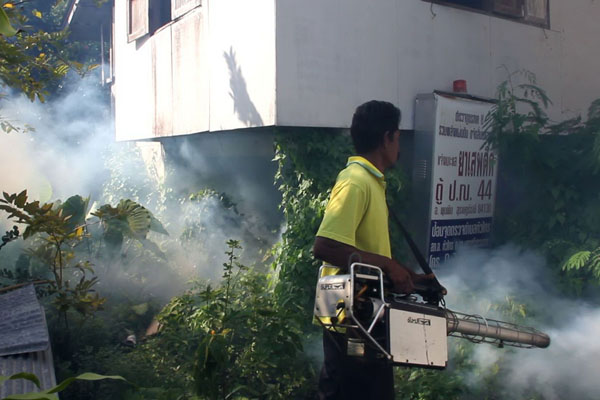 A municipal worker fumigates the temporary shelter being provided for Rohingya migrants at the Hua Sai police station, Nakhon Si Thammarat, on Wednesday, to kill mosquitoes and prevent transmission of malaria.. (Photo by Nujaree Raekrun)