Drunk student charged with reckless driving in deaths of 3 cyclists

Members of the Chai Nat cycling club light candles to mourn three bikers killed on May 3 by a driver suspected of driving under the influence of alcohol. (Photo by Chudate Seehawong)

Police on Monday charged a university student with reckless driving after she rammed her car into a group of cyclists, killing three and injuring two others.

The charge carries a maximum jail term of 10 years and a fine of up to 20,000 baht under the Criminal Code.

The cyclists from the Sua San Sai cycling club were pedalling from Chiang Mai's San Sai district to the Maekajarn hotspring in Wing Pa Pao district of Chiang Rai province when the crash occurred at 6.15am in Chiang Mai's Doi Saket district on Sunday.

Surapol Tasing, one of the injured bikers, showed the governor a banner reading ''drunk-driving is a killer''. 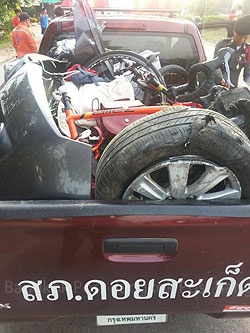 The damaged bicycles are put in a police pickup truck after they were crushed by driver Phatchuda Chairuan on Sunday in Chiang Mai's Doi Saket district. (Photo by Cheewin Sattha)

The 23-year-old woman was found to be drunk behind the wheel after a test showed an alcohol level above the legal limit. She admitted to investigators on Sunday that she was returning from a party in the city to her house in Doi Saket.

It remains unclear whether the party was thrown at a house or an entertainment venue.

The two injured cyclists are being treated at Maharaj Nakhon Chiang Mai Hospital of Chiang Mai University and expected to go home in the next two days, Chiang Mai governor Suriya Prasanbundit said after visiting them.

The tragedy already stirred anger from bicycle enthusiasts on the Facebook page of the Chiang Mai Sunday cycling club. Users criticised the drunk driver and authorities who turn blind eyes to pubs and nightclubs that stay open into the early hours.

Members of the cycling club in Chai Nat province also lit candles and staged a moment silence to pray for the three dead bikers in Chiang Mai.

They called on motorists to respect the right of cyclists to use roads and hoped that the crash would be the last tragic event involving bicycles.

The incident again has raised questions about entertainment venues that remain open after the legal closing time of 1am.

The Stopdrink Network urged authorities to take stern action against bars that continue to serve drunk customers to prevent future drunk-driving tragedies. Any business is subject to a maximum fine of 20,000 baht and a one-year jail sentence for selling alcohol to people considered already drunk.

Drunk-driving is a major cause of road accidents during long holidays, including the Songkran break last month.