KOH SAMUI — The final hours of two British backpackers killed on Koh Tao last year were tracked by more than a dozen security cameras, a court was told during the resumption of the trial of two Myanmar men accused of their murder.

British tourists Hannah Witheridge, 23, and David Miller, 24, were killed Sept 15 and their bodies found on a beach on Koh Tao. The killings drew outrage in Britain and raised questions about the competence of police and the treatment of migrant labourers in Thailand.

Following weeks of pressure on authorities to solve the crime, police said in October that Myanmar workers Zaw Lin and Win Zaw Htun, both 22, had confessed to the killings. Both later retracted their statements, saying they had been tortured into confessing.

Their trial resumed on Wednesday and police told the court that CCTV footage showed the last movements of Witheridge and Miller as they went to two bars on the small island hours before they died.

Miller and Witheridge were at the same bar but were later seen leaving separately with their friends. Nobody unfamiliar to the pair was seen following them, Pol Col Cherdpong said. 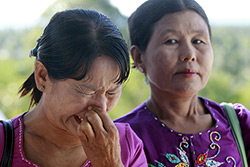 Defence lawyers earlier said they would focus on the reliability of crucial DNA evidence after allegations of police incompetence and evidence mishandling by defence lawyers.

Rights groups have also claimed the accused are being used as scapegoats because of their status as foreign migrant workers.

At the heart of the trial is a debate over DNA samples that police say link the two suspects to Witheridge's body.

Police have issued conflicting statements about the DNA, including that some was lost or "used up". They later took back that statement, saying DNA samples had not been lost.

The court on Samui ordered this month that remaining forensic evidence in the case be sent for re-examination at the Justice Ministry's Forensic Institute.

"We still have not seen any progress on the request to see the DNA gathered by police," defence lawyer Nakhon Chompuchat said before the trial resumed.

The mothers of the two accused have travelled from Myanmar for the trial. Outside the court, an emotional May Thein, the mother of Win Zaw Htun, said her son had never been in trouble and had gone to Thailand to earn money to support their family.