Social media to be tracked for incitement

The Yingluck trial wrap-up at the Supreme Court Tuesday will feature around 300 police assigned to ensure no 'third party' triggers unrest.

Around 300 police officers will be sent to maintain order at the Supreme Court where former prime minister Yingluck Shinawatra will deliver her closing statement Tuesday in the trial of her government's failed rice-pledging scheme.

Yingluck supporters are expected to flock to the Supreme Court's Criminal Division for Holders of Political Positions on Chaeng Watthana Road in Laksi district to give moral support to the embattled former premier.

He insisted police will not bar her supporters from coming to the court, but urged them to remain calm and orderly.

The Metropolitan Police Division 2 will deploy officers at he court.

Police are monitoring activity on social media for any comments or postings aimed at provoking discord over Ms Yingluck's court appearance or deemed in violation of the Computer Crime Act.

Those found responsible would be prosecuted, Pol Col Krisana noted.

Army chief Chalermchai Sitthisad said no order has been made to declare the site a "restricted" zone.

Gen Chalermchai, who is also secretary-general of the National Council for Peace and Order, said the court has not asked him to enforce extra security measures there.

According to court officials, dozens of security guards will be deployed inside the court to boost security.

No order has been made to broadcast Ms Yingluck's closing statement outside the courtroom.

Ms Yingluck has been charged with neglecting her duty in failing to prevent corruption in the rice-pledging scheme, her government's flagship policy.

If found guilty, she could face a jail term of up to 10 years. 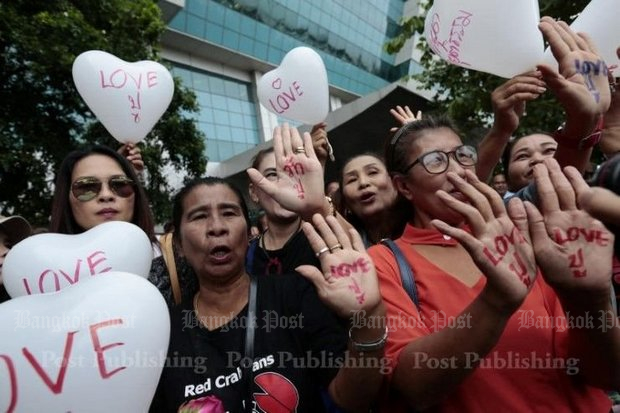 Supporters of ex-premier Yingluck have appeared during every court appearance, but the crowds have been extremely modest up to last month. (Bangkok Post file photo)

On July 21, about 1,000 supporters gathered in front of the court to give her their support as she attended a final witness hearing.

The court is scheduled to rule on Aug 25.

Mr Norawit said the former premier will lodge an appeal with the general convention of Supreme Court judges within 30 days if the court fails to rule in her favour.

Pheu Thai key figure Watana Muangsook insisted Monday he would show up at the court to give moral support to Ms Yingluck.

His insistence came after a police team from the Special Branch Bureau last week filed charges with the Crime Suppression Division against Mr Watana and two others for allegedly provoking unrest. They asked the CSD police to issue arrest warrants for them.

They were accused of encouraging people to come to gather at the court.

Mr Watana said he heard a charge will be levelled against him for sedition under Section 116 of the Criminal Code.

The firebrand politician gave Prime Minister Prayut Chan-o-cha a warning that "after the election, I will not let this go. [You should] remember this."

Mr Watana said Section 116 concerns those who persuade others to commit wrongdoing or overthrow the government.

"Because I invited people to give Ms Yingluck moral support -- what did I do wrong?" he said.

"It is called 'giving encouragement', which is in line with tradition," Mr Watana said. "Anyone wanting to issue a warrant for my arrest can go and apprehend me at the court."

BRUSSELS: NATO's 30 allies signed an accession protocol for Finland and Sweden on Tuesday to allow them to join the nuclear-armed alliance once allied parliaments ratify the decision, the most significant expansion of the alliance since the mid-1990s.

Physicians at Siriraj Hospital say the government should reimpose strict measures, including mandatory face masks, to cope with the highly transmissible BA.4 and BA.5 subvariants, as the number of available hospital beds falls.