Former prime minister Thaksin Shinawatra broke his long silence on Wednesday, with a single sentence on his @ThaksinLive Twitter account. 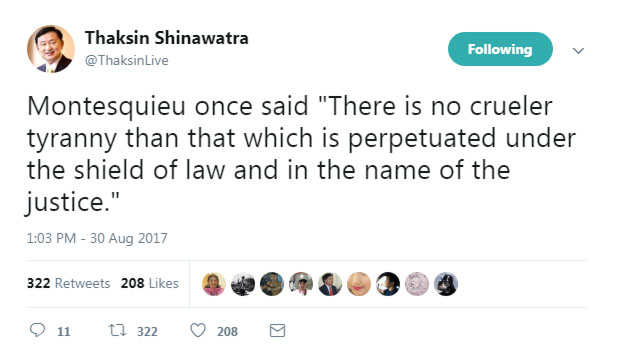 "Montesquieu once said 'There is no crueler tyranny than that which is perpetuated under the shield of law and in the name of the justice'," he wrote.

He was referring to a famous French philosopher. His message was sent without elaboration.

He wrote on his Facebook account in March this year that he would stop making comments, to avoid being seen as trying to disrupt the work of the junta.

Wednesday's message was posted after his young sister, former prime minister Yingluck, went into hiding. She failed to appear at the Supreme Court's Criminal Division for Holders of Political Positions on Friday to hear the ruling in her rice-pledging scheme trial.

Ms Yingluck is believed to have fled the country.

She is accused of dereliction of duty in failing to properly administer the scheme, leading to corruption and huge financial loss to the state. If convicted she faced up to 10 years in prison. A bench arrest warrant was issued and the court rescheduled delivery of its judgement to Sept 27.