A group of protesters led by the red-shirt United Front for Democracy against Dictatorship (UDD) staged an anti-amnesty rally on Vibhavadi Rangsit Road in front of the office of Thai Rath newspaper on Thursday morning, reports said. 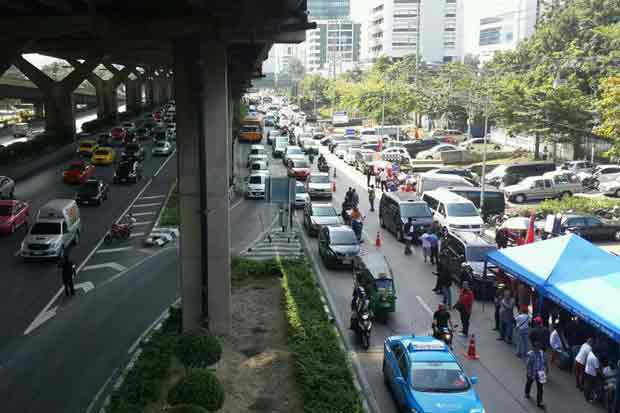 UDD chairwoman Tida Tawornseth led the protest, which occupied one of the traffic lanes.

The UDD opposes the government's blanket amnesty bill as it would exonerate former prime minister Abhisit Vejjajiva and his deputy Suthep Thaugsuban, both of the opposition Democrat Party, over the bloody crackdown on the red-shirt protesters in 2010.

The Democrat Party also planned to begin a long mass protest against the amnesty bill at Samsen railway station on Thursday evening. The Democrats fear the amnesty would clear former prime minister Thaksin Shinawatra's criminal convictions since it is expected to cover people facing legal action stemming from investigations after the 2006 coup.