All eyes on army as crisis peaks
Thailand
Politics

All eyes on army as crisis peaks

Suthep Thaugsuban’s move on Friday to mobilise anti-government protesters across the city is aimed at reinforcing his message that the caretaker government is inept and lacks legitimacy following the political blows it received this week.

As soldiers guarded an entrance to parliament Friday during a session to elect a new Senate speaker, all eyes shifted to the key decision maker, army commander Gen Prayuth Chan-ocha. (Photo by Pattarachai Preechapanich)

Mr Suthep is trying to win over support from the leaders of three institutions which he believes still wield legitimate power — the Supreme Court president, the Senate speaker, and the Election Commission (EC) chairman — to push through the appointment of an interim prime minister under Section 7 of the charter.

As far as government supporters are concerned he will not succeed. And no matter how the political situation turns out this weekend, the role of the military is central to the current impasse — for better or worse.

Capitalising on the Constitutional Court’s decision on Wednesday to remove Yingluck Shinawatra as caretaker prime minister for abuse of power over the Thawil Pliensri transfer, Mr Suthep brought forward the date of his latest “final all-out battle” against the government and the so-called “Thaksin regime”.

From their bases at Lumpini Park and Chaeng Watthana, People’s Democratic Reform Committee (PDRC) protesters fanned out across the city to seven locations — Government House, TV channels 3, 5, 7, 9 and 11, and the government’s Centre for the Administration of Peace and Order (Capo).

In “visiting” various television stations, Mr Suthep demanded that they broadcast live his nightly speeches and not air statements from Capo — a move which could boost his claims to legitimacy and buoy supporters to join the protests this weekend.

Capo, in response, issued a short statement urging the public not to join the protests as they risked legal action. The government has refused to engage or respond to Mr Suthep’s demand that acting caretaker PM Niwatthamrong Bunsongpaisal meet him to discuss the formation of a new interim government.

Mr Niwatthamrong’s only comment on Friday was that he hoped there would not be any violence.

At Government House, Mr Suthep was allowed to step into the grounds alone as the protesters massed outside the gates.

He called on the the Supreme Court president, the Senate speaker, who was elected last night, and the EC chairman to set up an “interim people’s government and legislative assembly” within the next few days.

These three individuals, he said, now represent the remaining legitimate pillars of power in this country and they should act to form an interim government within a few days.

If they do not the PDRC would do the job itself. He did not elaborate.

The role of the Senate speaker is crucial as he would be the one who nominates and countersigns a new prime minister for His Majesty the King’s endorsement. 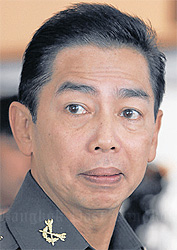 The PDRC and its allies expressed satisfaction that Surachai Liangboonlertchai, the incumbent first deputy speaker and acting speaker, was elected the new Senate speaker last night.

The caretaker government had backed Pol Gen Jongrak Jutanont for the job.

The PDRC believes Sen Surachai will agree to the PDRC’s push for an interim PM through Section 7 of the constitution despite the fact that interpretation of the section is still disputed.

The law states: “Whenever no provision under this constitution is applicable to any case, it shall be decided in accordance with the constitutional practice in the democratic regime of government with the King as Head of State”.

It remains to be seen whether the Supreme Court president, the new Senate speaker, and the Election Commission chairman will agree to Mr Suthep's demands.

The United Front for Democracy against Dictatorship says Mr Suthep’s Senate game plan will not succeed.

Red-shirt leader Jatuporn Prompan said that even if a new Senate leader is elected by its members, it requires royal endorsement. This means Mr Suthep’s plan cannot proceed.

The red shirts say Mr Suthep’s ultimate game plan is to instigate violent clashes that would give the military the excuse to stage a coup.

The fact that the PDRC has split up its protests across the city makes it susceptible to grenade attacks and shootings. Mr Jatuporn urged red-shirt supporters not to act independently but remain in their positions on full alert and to join their mass rally Saturday at Utthayan Road in Nakhon Pathom.

The red-shirt leadership also said that if there are attacks on anti-government protesters over the weekend, red shirts would not have a hand in them.

It warned the military the red shirts have a duty to protect democracy and would mobilise if there is a military coup.

As the political situation unfolds this weekend the role of the military remains crucial.

Since the start of his protests in October last year, leading up to the “Bangkok shutdown” and from then on the military has adopted a cautious stance.

It has preferred to have police lead crowd and protest control.

If for whatever reason violence breaks out and the government is unable to control the situation, the military will be forced to step in.