In the heart of Mon country
Thailand
Special Report

In the heart of Mon country

In Pathum Thani just north of Bangkok, an ancient community is preserving the harmonious traditions of bygone days

Pathum Thani's proximity to Bangkok means it is usually overlooked as a "transit" province, a place to travel through rather than stay.

However, the province is learning how to harness its abundant resources to transform into a unique and fascinating destination.

Pathum Thani stretches north of Bangkok, along the rice belt that springs from the fertile soil of the Chao Phraya river basin. The province has bred many of the country's premium-grade rice strains, including the pathum 1, which is disease-resistant and yet produces grains with quality comparable to high-end jasmine rice. 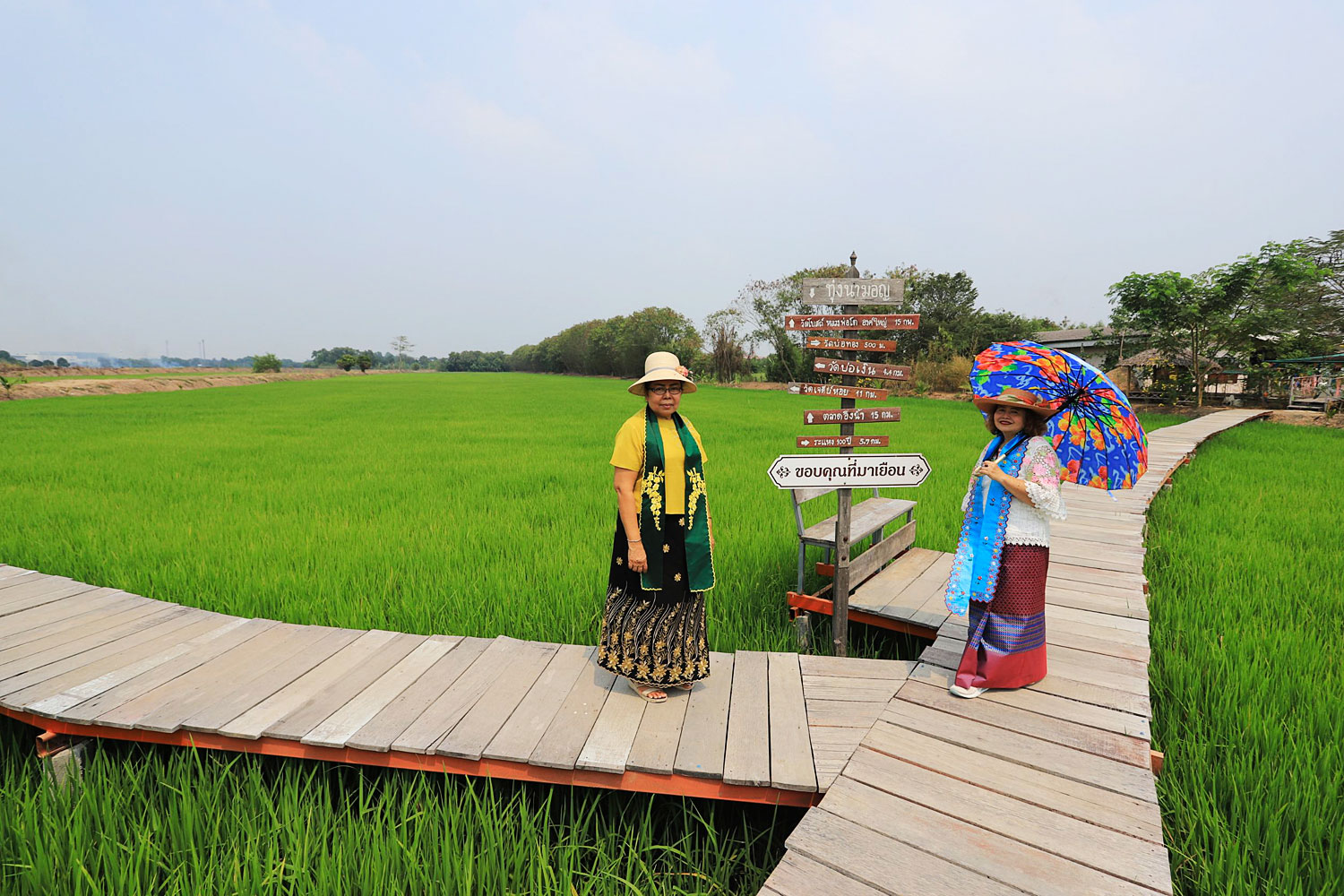 Women in traditional Mon dress stroll along the boardwalk over a rice field at the Otop tourism community in Pathum Thani, where visitors can also paddle boats through an orchard. 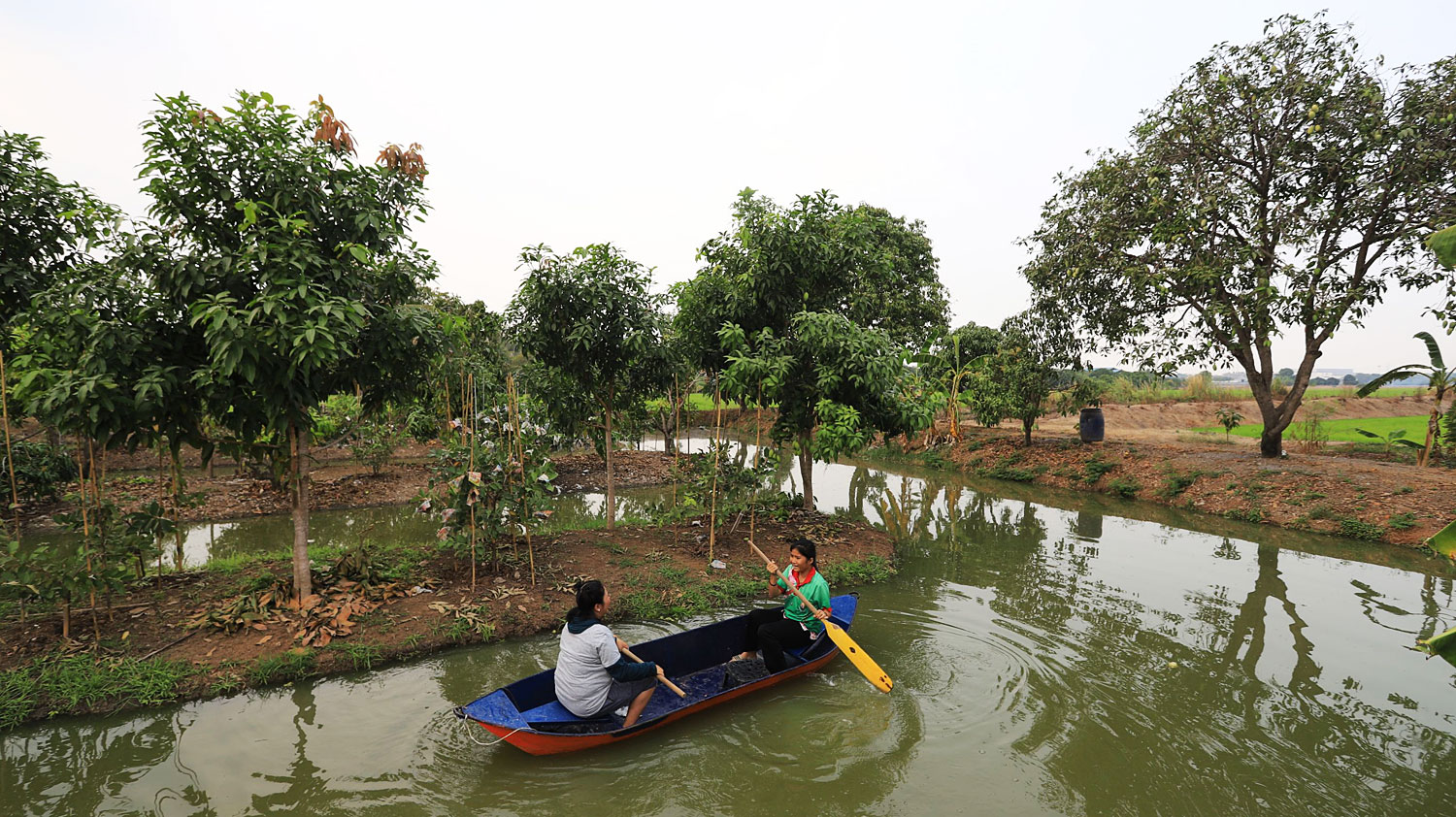 The province is home to old settlements of ethnic Mon, who immigrated east centuries ago from parts of the territory that is now in Myanmar. These are people who are credited with Pathum Thani's farming success story.

The ethnic-Mon farmers of Pathum Thani have honed their skills in rice cultivation over generations of observing the weather patterns and behaviour of natural water sources in the Central Plains region.

The farmers have consolidated their efforts under the umbrella of the Otop (One Tambon One Product) tourism community in tambon Kukwang, Lad Lum Kaew district. Also known as the Ban Bor Thong community, it was founded on a Mon way of life steeped in tradition and farming heritage.

Thanjira At-udomrat, a co-founder of the tourism project, said Mon descendants of old farming families had formed the special community so visitors could experience first-hand how farmers can free themselves from poverty and debt.

Their secret to escaping debt bondage is to live within their means while carefully selecting seasonal tree varieties that yield fruits at different times of the year. The trees are planted alongside the rice paddies in an integrated farming formula that ensures farmers enjoy a year-round income. 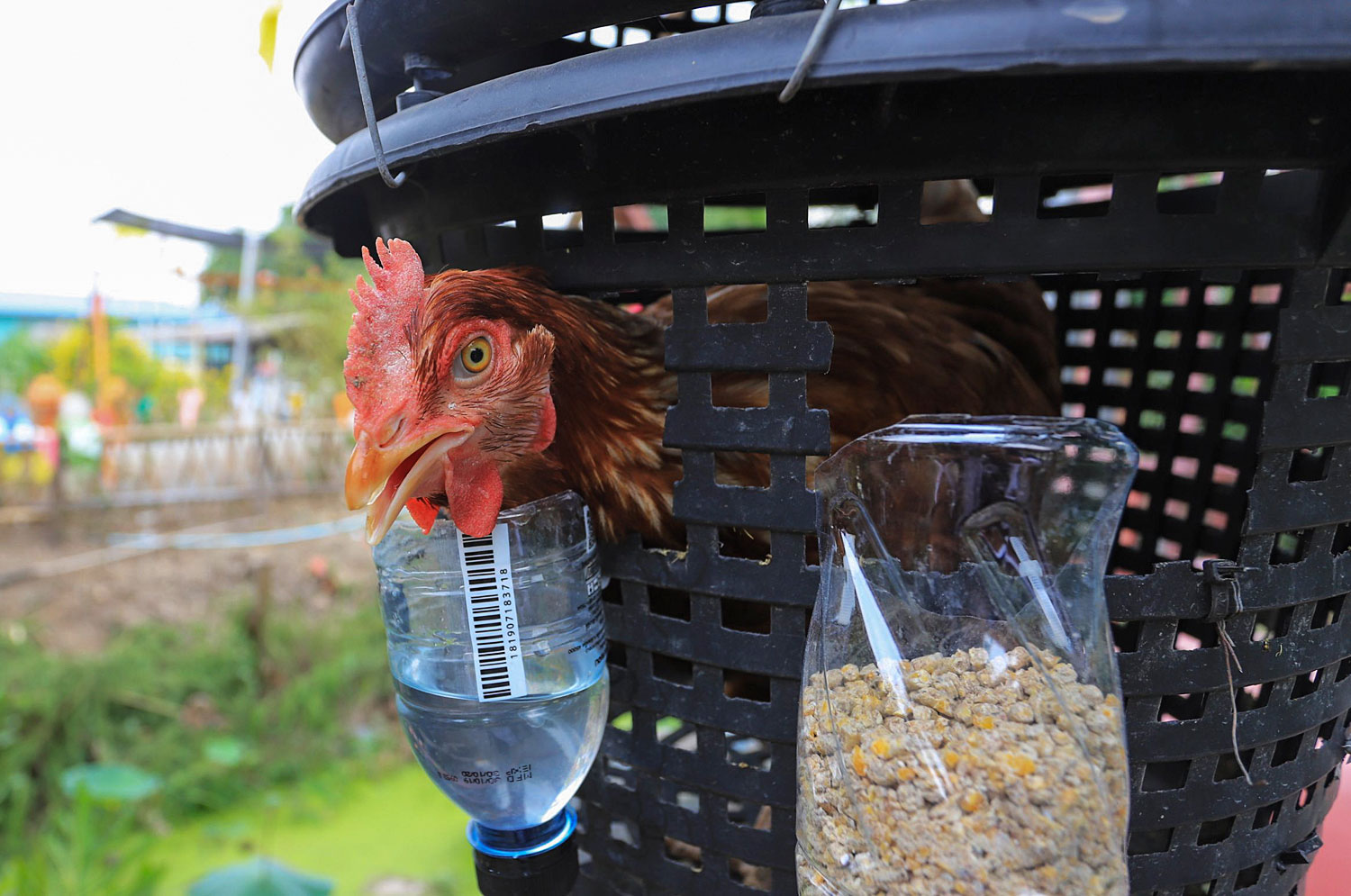 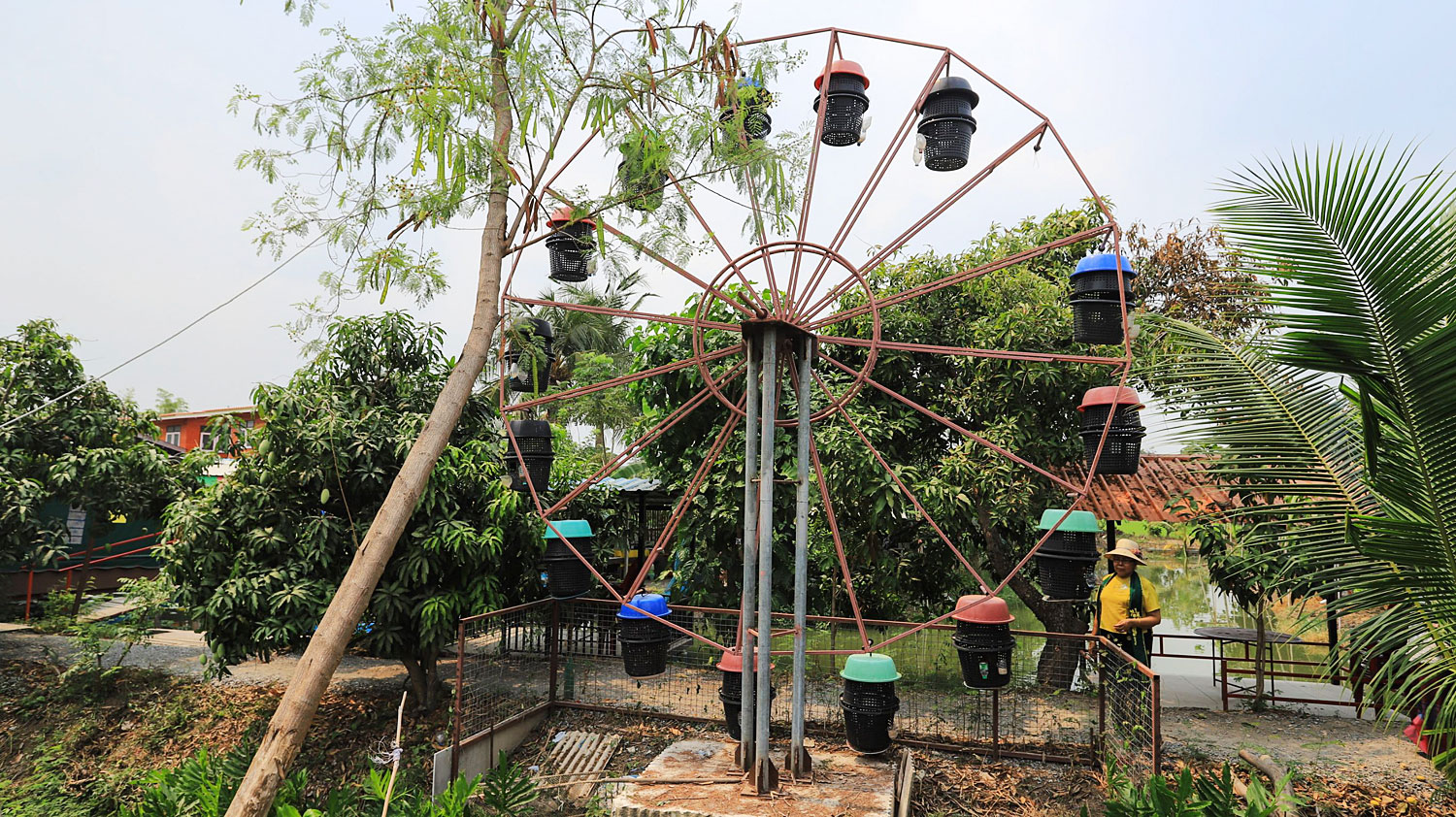 Chickens are raised in baskets suspended from a wheel, a method which helps produce high-quality eggs.

The community has converted a 12-rai plot into a "living exhibition" of integrated farming where visitors are encouraged to drop by for a visit. The same farmland is home to a traditional Mon-style house equipped with vintage furniture and kitchen utensils which provide a glimpse into the typical local lifestyle.

Visitors are also introduced to the deep cultural wisdom that protects the health and well-being of residents to this day, said Ms Thanjira. From it comes knowledge of natural treatments for common farming ailments like trigger finger.

The community and its knowledge centre opened to visitors in late 2018. The land on which it is located belongs to Wat Thien Thawai, a religious and spiritual sanctuary for the area's ethnic Mon residents.

Ms Thanjira said the integrated farming approach encourages locals to be self-reliant and take control of their livelihoods, in line with the widely adopted sufficiency principle prescribed by His Majesty King Bhumibol Adulyadej The Great.

The demonstration farm uses only organic fertilisers and pesticides. Also banned from the farm is fertiliser made from human excrement. Shunning these artificial "quick-fixes", the community strives to constantly improve the fields and bring them on par with the quality of organic, nutrient-rich forest soil. 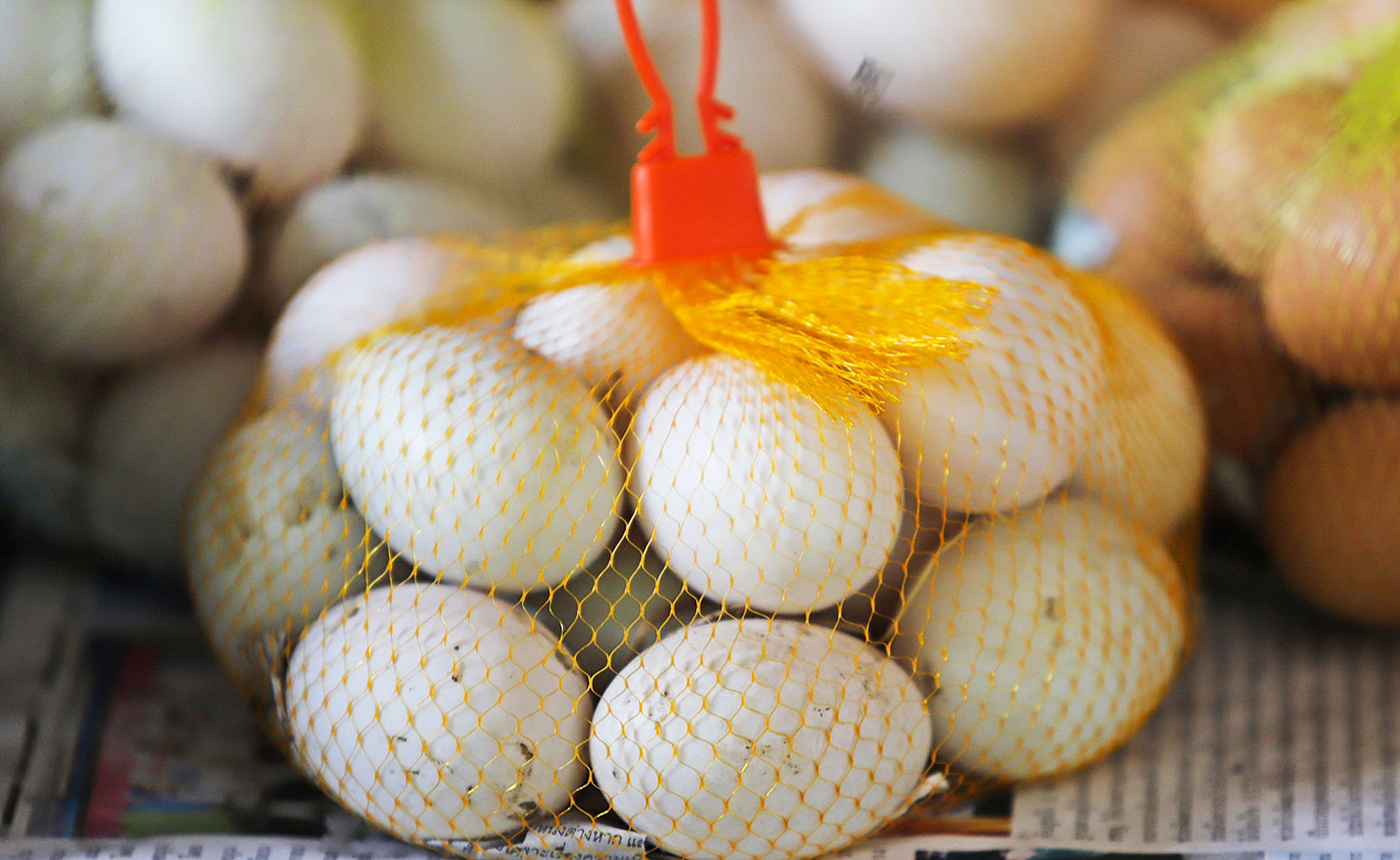 Free-range duck eggs offered for sale in the community.

"A farming system that is sustainable is the source of security for farmers," she said.

Mon wisdom has also been applied to raising chickens "in baskets". The method involves providing each bird with a basket, which prevents them wandering off and grazing on garden vegetables in neighbours' allotments. Chickens that stray can also become dinner for large snakes or local dogs.

The baskets offer a protective cocoon while also permitting ample space between chickens. The crammed conditions at battery farms are known to cause stress and inhibit the chickens' ability to produce quality eggs.

The chicken droppings are also gathered and scattered around the trees as natural fertiliser.

The cultural roots of Pathum Thani's ethnic Mon residents reach back more than 300 years to King Narai the Great, who ruled over the Ayutthaya kingdom from 1656 to the middle of 1688.

King Narai reigned as Mon people flowed into the kingdom to escape the war in their homeland. The King granted the migrants land in what is now part of Sam Khok district.

Another major wave of the Mon migrants arrived 150 years later during the reign of King Rama II of the present Chakri Dynasty. Some of this second batch of migrants, known as the "Mon Yai" and originating from Mottama in Thaton district of Myanmar's Mon state, were also placed in the Sam Khok settlement. Its population quickly expanded as the new arrivals and succeeding Mon generations found a foothold on the fertile soil. 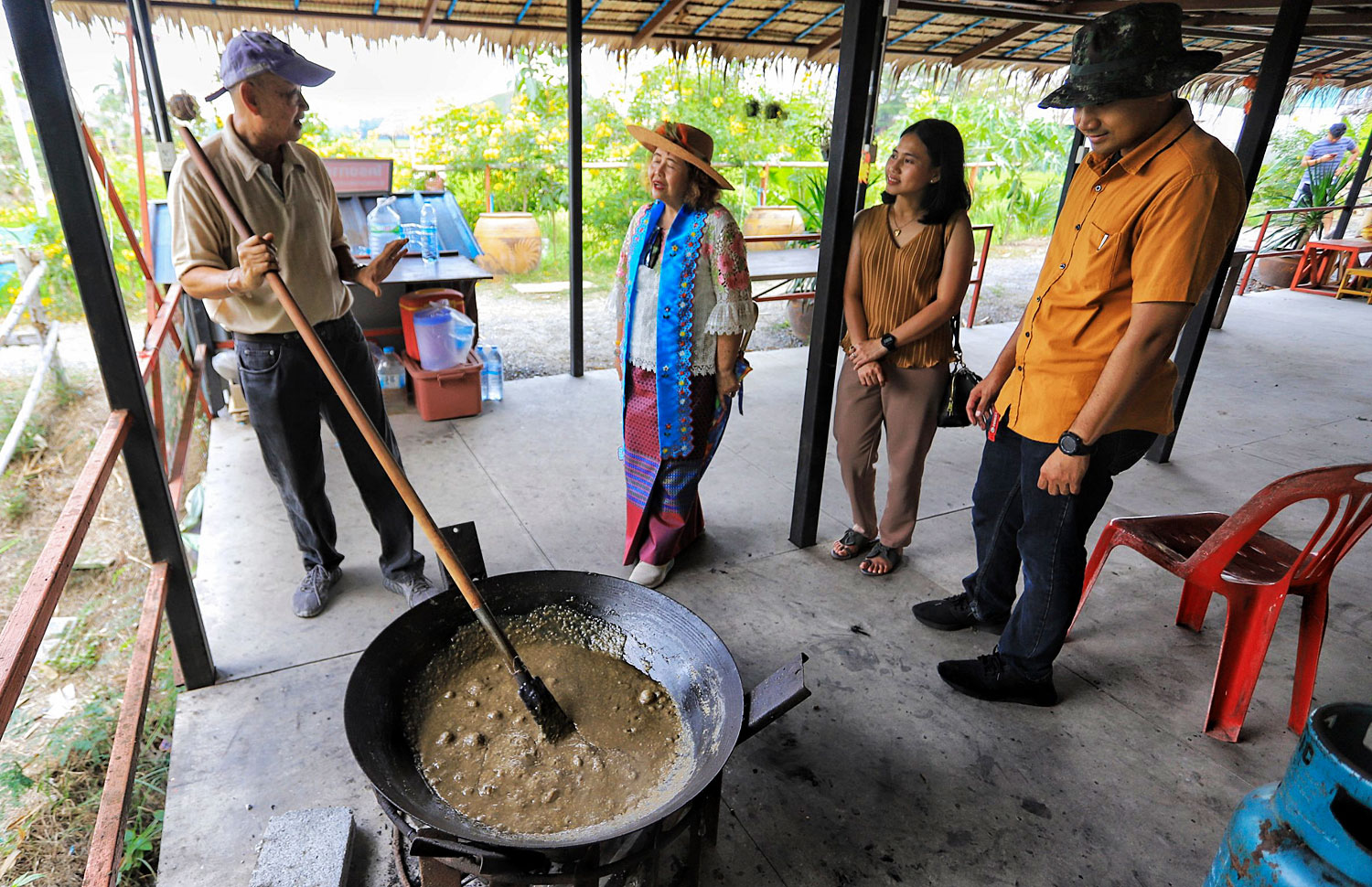 Visitors check out the making of traditional farm products in the tourism community. (Photos by Pongpat Wongyala)

The ethnic group's substantial representation in Sam Khok district is reflected in Pathum Thani's official motto, which nods to the Mon's role in cultivating the province of Bua Luang (Sacred Lotus) and Ruang Khao (ear of rice).

Sunisa Boonyathissatharn, a visitor to the Ban Bor Thong community, said the community holds several pull factors, one of which is the popular khao chae -- a savoury dish of rice soaked in scented water accompanied by small tasty side dishes. Khao chae is believed to be a gastronomic creation of Mon migrants, who brought the recipe with them in the second exodus during the time of King Rama II.

Historians say the recipe has since been adapted and modified for different variations.

Pathum Thani governor Pinij Boonlert said visitors to the province can escape Bangkok's bustle to experience the slow life of bygone times via trips to the countryside.

They will find centuries-old Mon traditions are still shaping the province's cultural landscape. Anchoring them is a solid faith in Buddhism that will be familiar to all Thais as the foundation of a strong community.