published : 4 Aug 2019 at 07:30
newspaper section: News
writer: Chayanit Pongsupradit, Narumon Kasemsuk and Supoj Wancharoen
FACELIFT: The Bangkok Metropolitan Administration is planning to revamp the landscape of Khao San Road from October to February. During construction, the road will be opened to business and tourism as usual.

Known for decades among tourists worldwide as "fun, wild and rowdy", Khao San Road, which is set to have a major makeover, has never enjoyed the status of being a "real" walking street. This, however, is about to change.

The Bangkok Metropolitan Administration (BMA) will spend 48.8 million baht to give a 400 metre stretch of the road a major facelift with the intention of lifting transforming this popular backpacking hub into an international walking street.

The revamp is expected to start this October and finish in February.

The project has been welcomed by all stakeholders. Of course, Khao San is known as a tourism magnet, but its unique vibe is also an attraction for local residents.

Yet it is undeniable the road infrastructure is not designed for a walking street.

Residents complained of vendors who hijacked footpaths and sometimes road space to ply their trade.

The facelift is designed to solve these problems as it will readjust pavements for more ease of walking and allocate more space to vendors.

The new scenery will create a friendlier environment for street vendors and shopkeepers and hopefully alleviate arguments between both sides which have persisted for a long time, according to Sanga Ruangwattanakul, president of the Khao San Business Association and CEO of Buddy Group.

"If the BMA starts this project in October, it will affect the capacity of Khao San Road which normally caters for 40,000-50,000 tourists per day in the high season, but the low season number will naturally drop to 20,000," Mr Sanga told the Bangkok Post.

The tourism sector has suffered from lower numbers of visitors and construction work on Khao San during the high season "will only rub salt into the wound".

Sluggish performance in the second quarter saw hotel occupancies for Buddy Group's 200 rooms, one of the biggest hospitality businesses in Khao San Road, dropping from 80% last year to 60%.

Price monitoring of online travel agents also indicates lower room rates for single rooms in this area. The price per room has fallen from 2,000 baht to 1,500-1,600 baht per night since the beginning of this year.

"Lower room rates already tell us how unhealthy the situation is, but as we still have some hope for the high season, we'd like the BMA to consider the timeline of this project," Mr Sanga said. "We've planned many activities to lure tourists back after we stopped the Songkran celebrations to comply with the coronation preparations."

The project is touted as the first facelift for the short road which was created in 1892, during the reign of King Rama V.

The road was once a major rice trading market, an activity that gave the road the eponymous name of Khao San which means "rice mill" or "milled rice" in the local language.

But the rice market area turned into a road for tourists almost four decades ago, when foreign film crews came to film in Bangkok and rented cheap rooms from locals, a starting point that transformed the rice trading road into a haven for backpackers.

"The new Khao San will not lose its old charm," he said.

"The area will be cleaner, more beautiful and in line with the architecture and landscape of the area," Mr Sakoltee said.

The landscape development is in line with Prime Minister Prayut Chan-o-cha's policy to develop the Rattanakosin area, known as the country's historic landmark zone.

He said the construction will not disrupt local businesses. Contractors will alternately do construction work on partial areas, so business operators can carry on and tourists can visit as usual.

The new Khao San Road is expected to have a better look.

One of the new features will be the repaving of footpaths, with their surfaces renovated with flame-finished granite tiles. 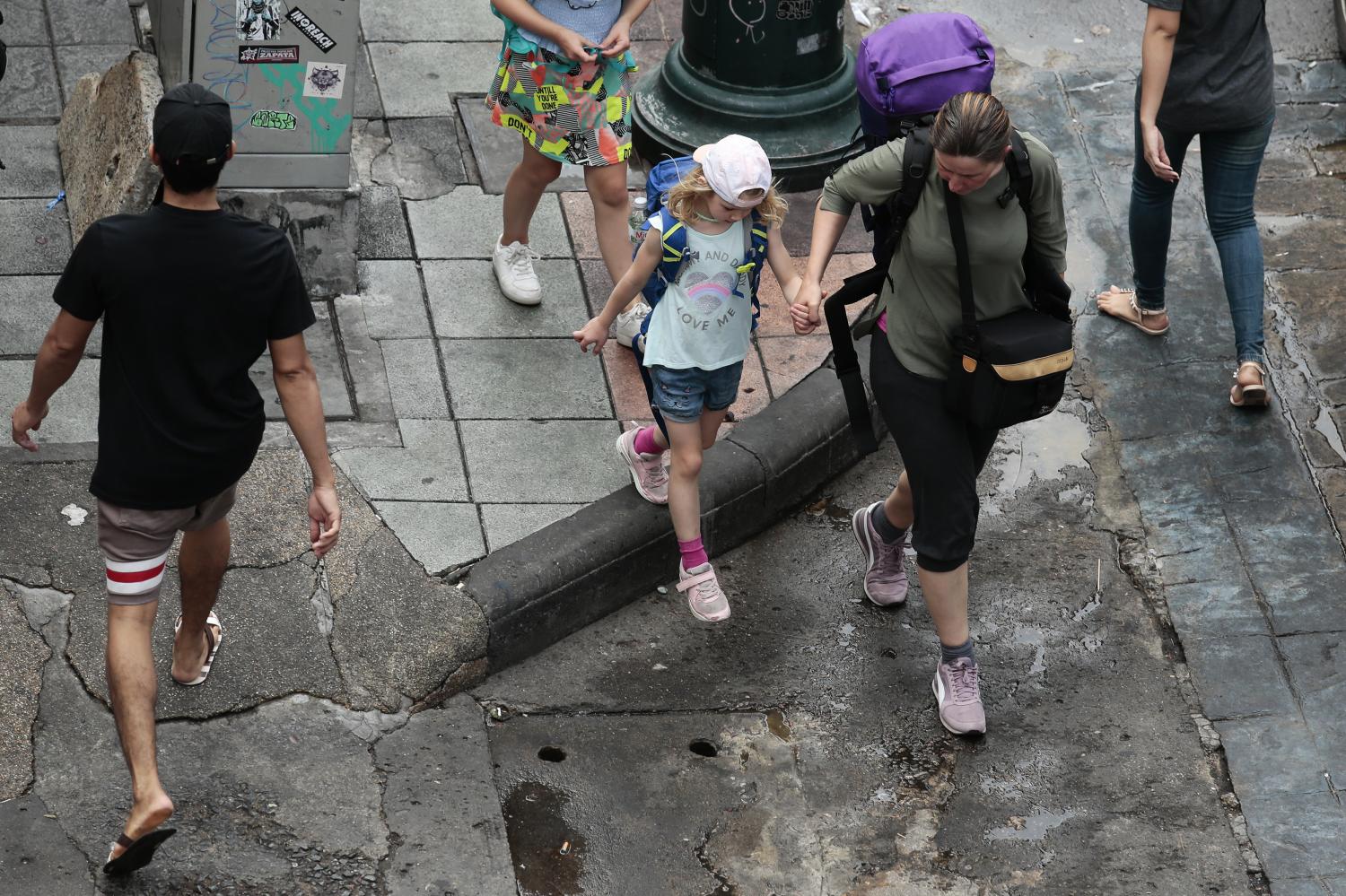 WATCH YOUR STEP: The Khao San Road landscape development will create a pleasant street that is safe to walk along, advocates say. One of the new features will be repaved footpaths.

But the major change is that it will provide allocated spaces for vendors, an aspect that will end ongoing disputes.

The BMA has unsuccessfully tried to regulate vendors who have hijacked the pavements.

Mr Sakoltee said about 240-360 of the current vendors will be given a chance to continue to ply their trade.

Licences on the road will be given to Thai vendors subject to renewal every 1-2 years.

He said vendors that sublease their trading permits will be disqualified.

The BMA and police will make sure that items sold on Khao San Road are not counterfeit or pirated goods.

Each vendor will be given a 1.5x2m stall space set up back-to-back in rows along the road.

The city said last year it wants the vendors to sell their goods on the street, not footpaths.

The BMA says it is a move that will make Khao San a real walking street.

Among new features in the area are 60 centimetre-high collapsible stainless railings aimed at preventing cars from entering the road from 9am to 9pm.

It's not only business operators who are welcoming the project; tourists agreed it is about time that the road got a makeover. 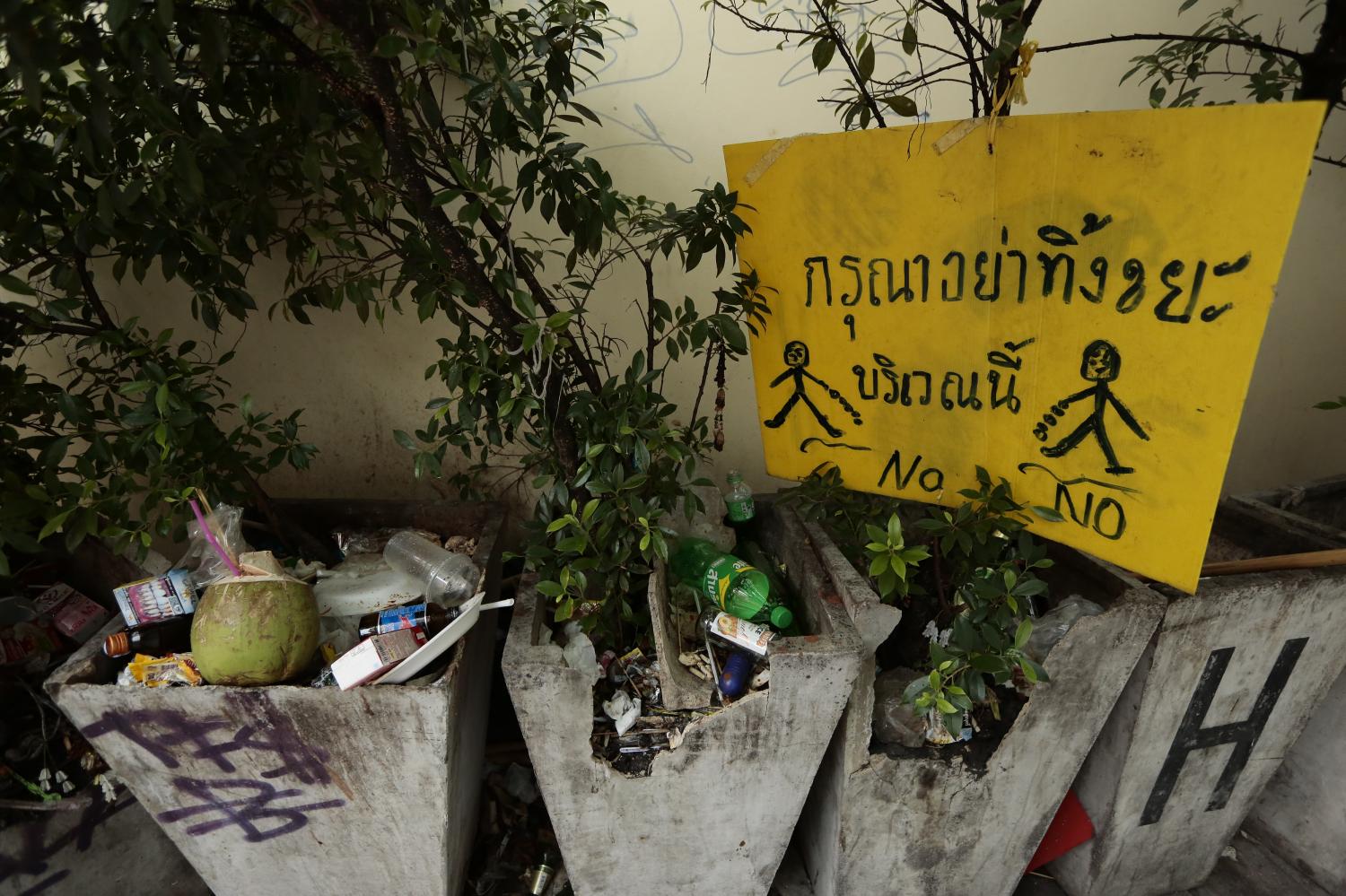 GARBAGE EVERYWHERE: Khao San Road may be a renowned tourist attraction but the area has many problems, among them poor garbage management.

Yet one thing that tourists wish for is that the re-landscaping project won't take away any of the charm of their favourite nightlife attraction.

"I hope the road development helps people get through the street easily and doesn't affect the restaurants that extend into the street," said Mariah Hugo, an exchange student from the United States who now studies at Thammasat University.

"By designating spaces for the vendors, I think tourists will know exactly where to go and vendors will be able to sell in a more orderly way," Ms Hugo told the Bangkok Post.

Dat Le, an expat from Germany who also attends the university said he believes the revamp will help it attract a larger number of tourists from more diverse groups.

"I would still go there, even without such a revamp," Mr Le said.

"A large number of people have been visiting Khao San Road for more than 40 years, and I don't think that will change. This new development will make the road more child-friendly and Khao San Road might be able to reach a wider target audience."

One of the reasons that tourists and visitors keep returning is that the layout of Khao San Road is also tourist-friendly, according to Madeleine Kalisch, an exchange student from the Netherlands.

"Even visitors who have never been to Khao San Road before are able to explore things on either side of the road by simply walking in one direction to get an overview, it's nothing complex," she told the Bangkok Post.

Despite all the things that tourists find attractive, there are some things about Khao San Road that prevents visitors to give the thumbs up.

Every night, after midnight into the early morning, rubbish litters the ground and unpleasant smells start spreading. The filth attracts hundreds of rats and cockroaches.

Unorganised vendors can also cause problems when they extend into the street a little too much, or when they move their stalls when packing up and take their belongings through the busy road full of people.