The beach town of Chon Buri is reviving after the country reinstated the Thailand Pass system to welcome foreign tourists this month. Pattaya, Bang Lamung, Koh Sichang, Si Racha and Sattahip have been added to the Sandbox programme as a new alternative. 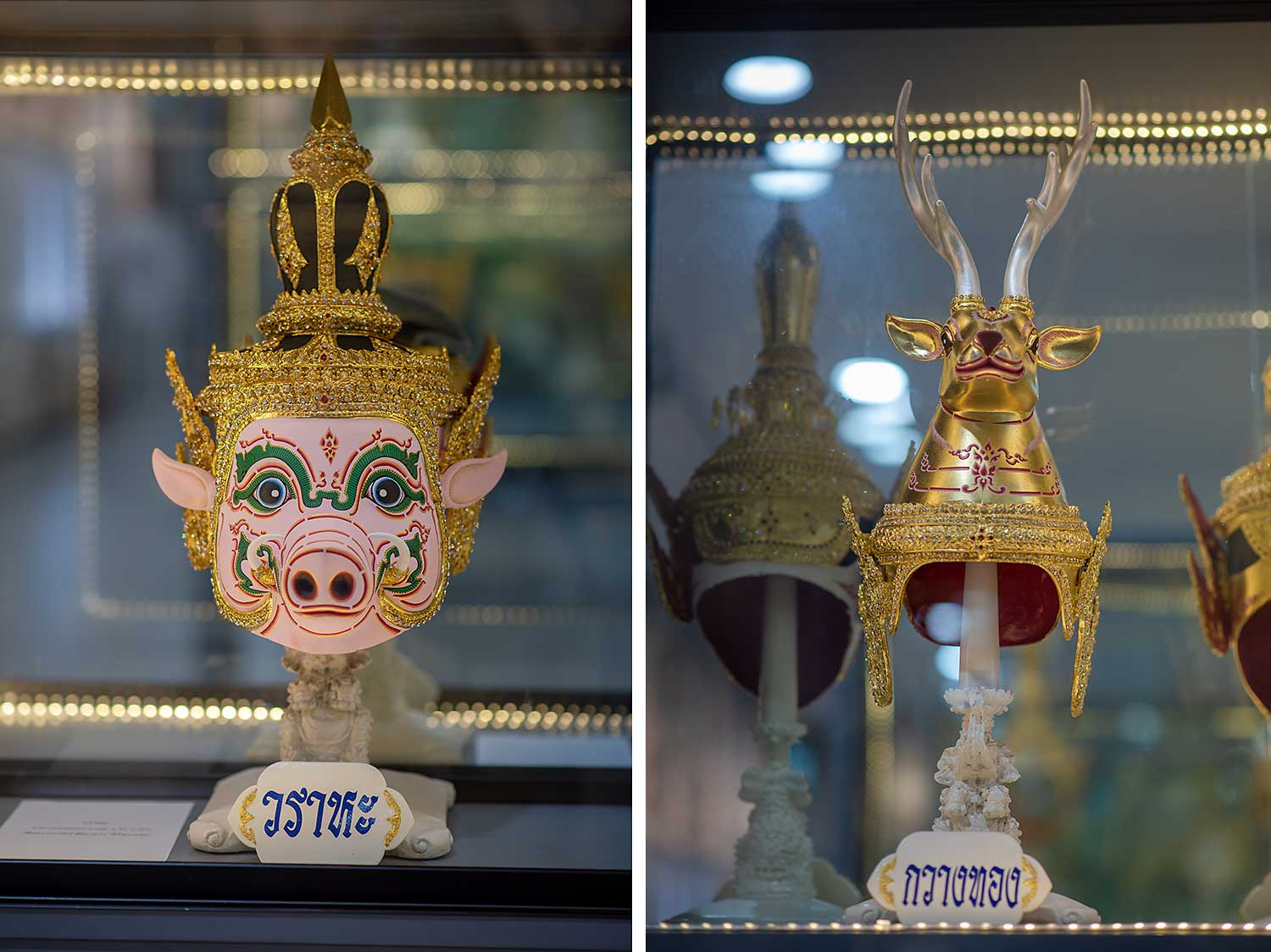 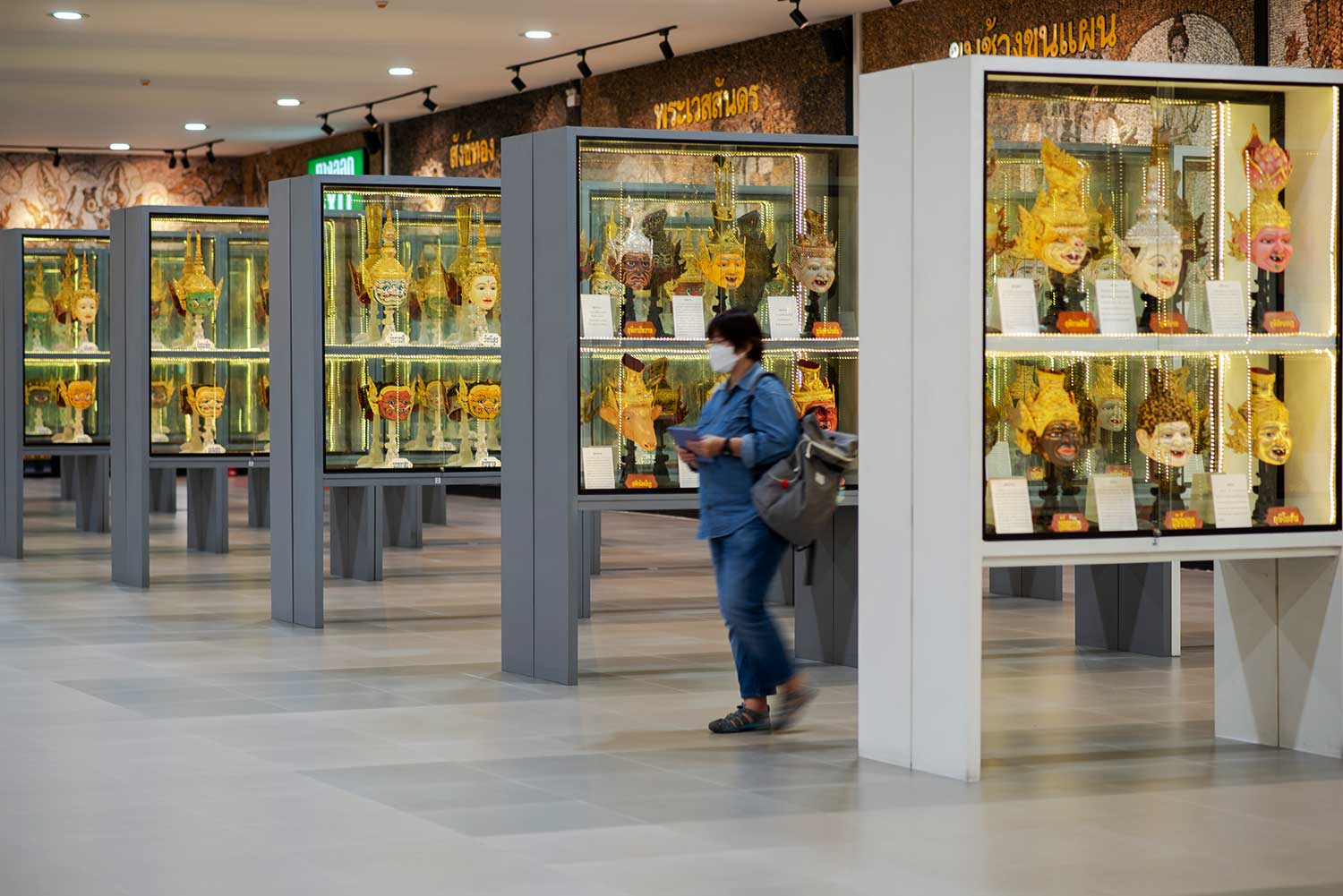 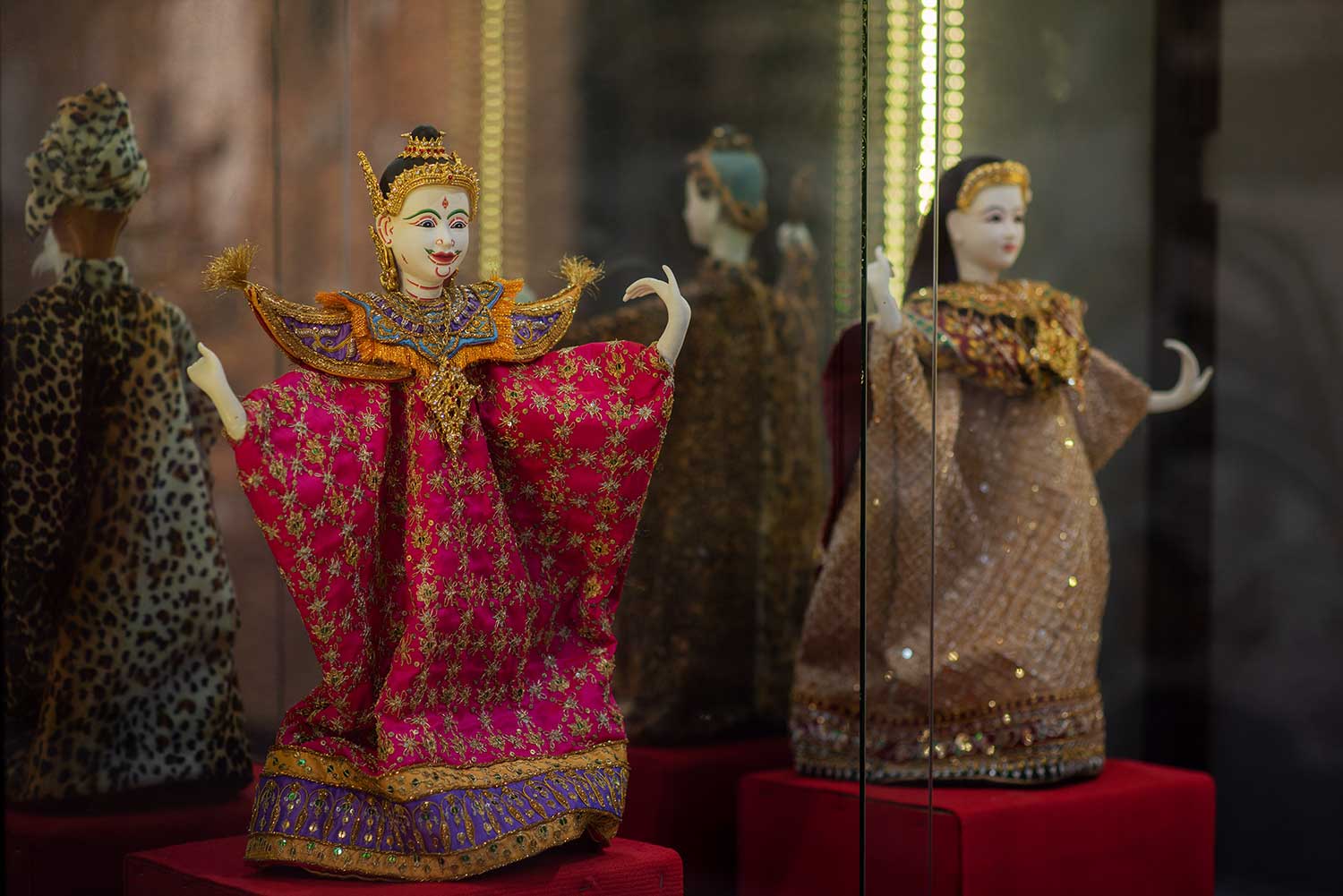 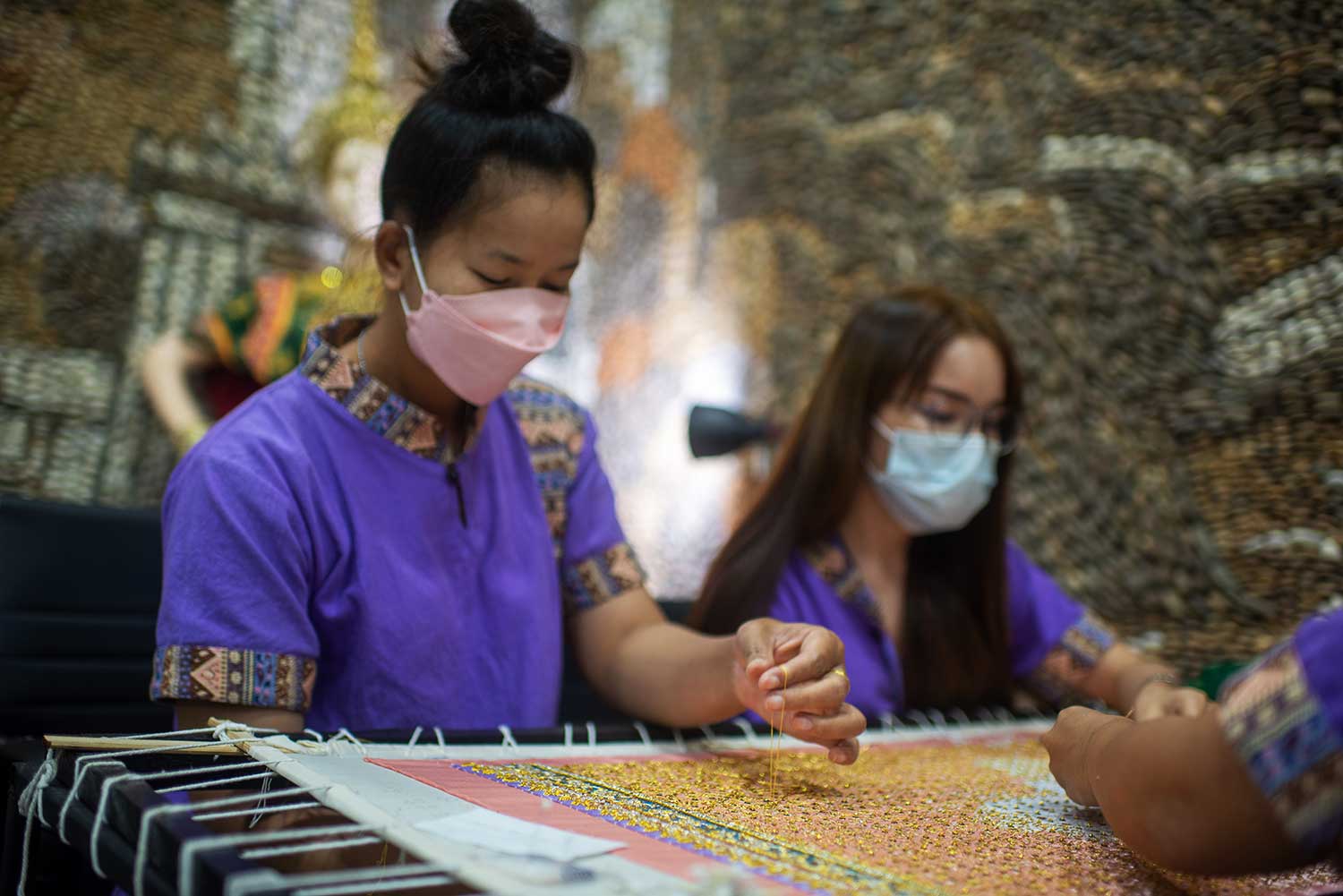 For decades, this province has been a favourite weekend escape for local vacationers like me, who want to enjoy a short trip while taking in stunning vistas of the Gulf of Thailand to quench our wanderlust.

After a two-hour drive from Bangkok, I arrived in Sattahip district and found myself caught in the imaginative world of Thai literature at the recently opened Thai Khon Mask Museum. This is the newest addition to the verdant 1,700 rai Nong Nooch Tropical Garden to honour Thailand's exceptional craftsmanship and rich cultural legacy.

Started in 2017, Kampon Tansacha has invested more than 10 million baht in collaborating with veteran artist Prommin Sumana to craft an astonishing edition of 506 khon masks based on characters from the Ramakien epic.

A gigantic 4m sculpture of Hanuman holding Phra Ram's pavilion in his mouth stands at the entryway, evoking a key moment from the Battle of Maiyarap episode. Inside, the walls are decked with sand stones that recount the stories of Sang Thong, Khun Chang Khun Phaen and Sano Noi Ruen Ngam. The museum houses 121 glass display cabinets that are kept at a constant temperature of 28-29C.

"I got the idea when I was tasked with decorating the garden at the Bang Sai Royal Folk Arts and Crafts Center in Ayutthaya and came upon a collection of lovely khon masks. When I returned to my hometown, I planned to construct a museum that would house a vast collection of khon masks and serve as a learning centre for future generations," said Kampon, managing director of Nong Nooch Tropical Garden.

"This is a development of our own theatre which presents a variety of traditional performances in order to preserve Thailand's rich cultural history. We spent four years making a collection of 506 khon masks and we're now working on puppets." 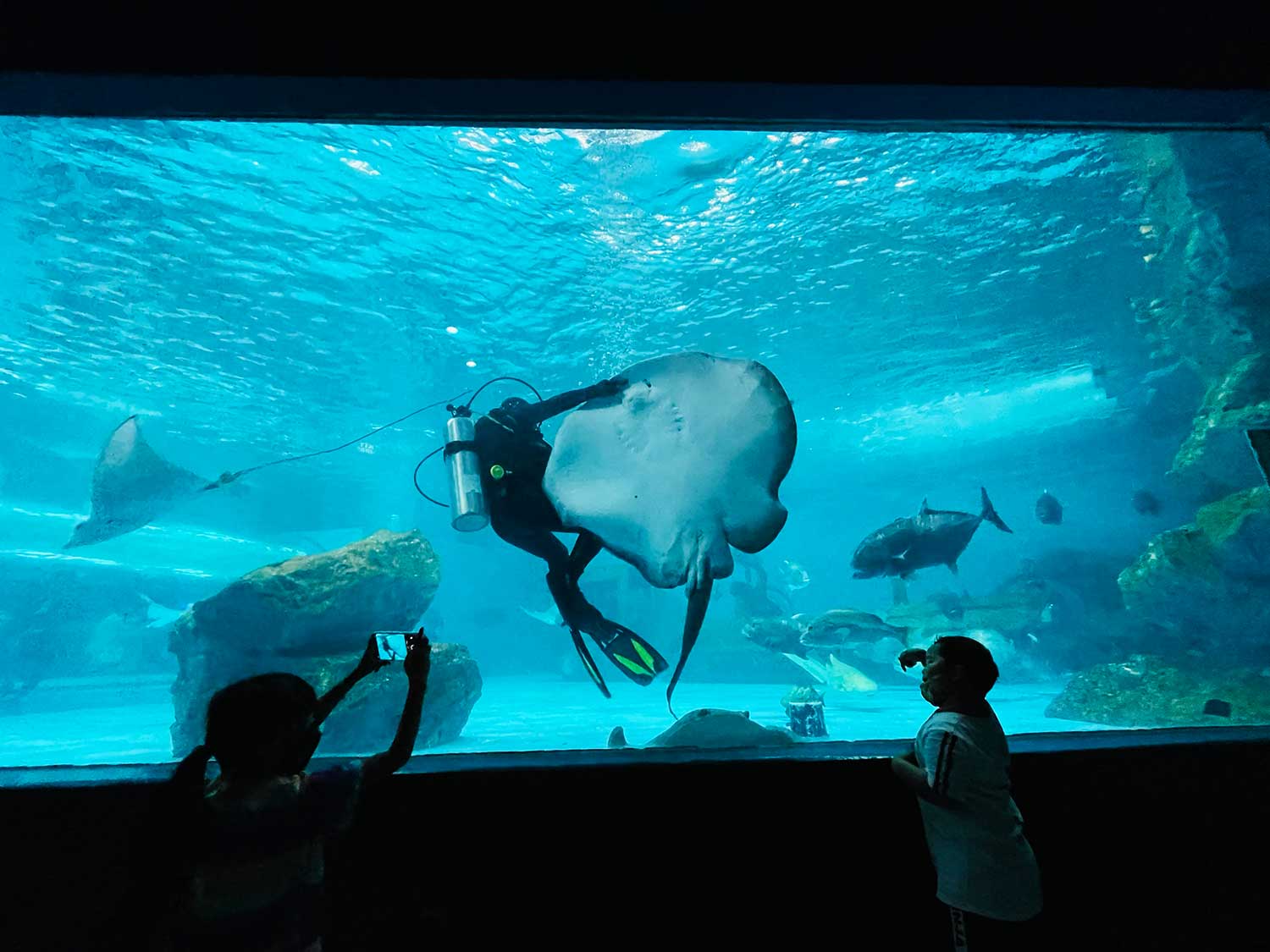 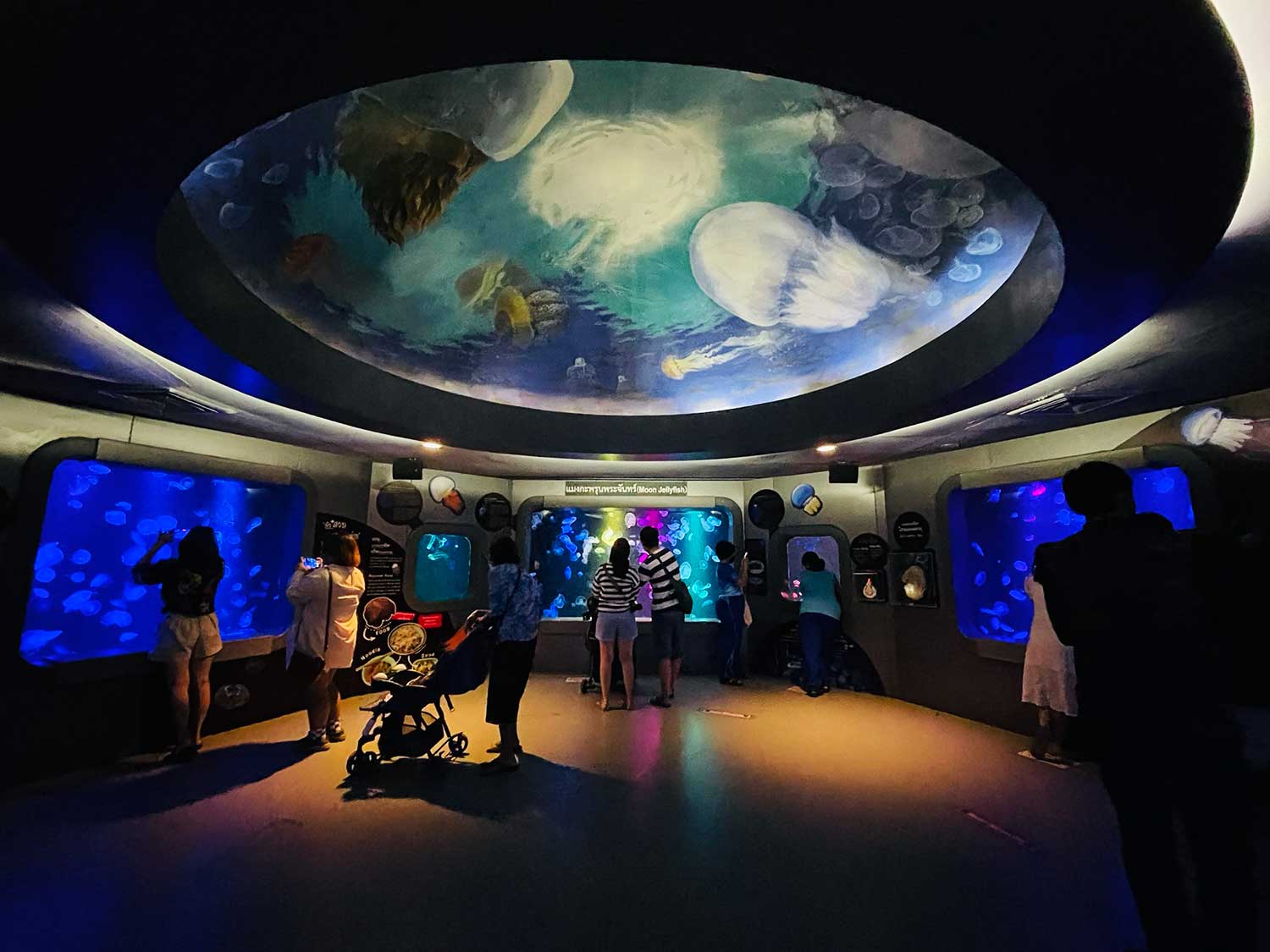 The exhibition is divided into three zones, the first of which is dedicated to an exclusive edition of 24 intricate khon masks created to preserve conventional mask-making art. Ajarn Prommin and his team have created plaster moulds using papier-mâché techniques, mulberry paper and sawdust combined with latex glue.

The masks are painted with a grey and red base before being coated in gold leaf and painted with acrylic colours to portray emotions, with some of them embellished with Swarovski crystals to give an elegant look. Kalaikot Rishi, Phra Ram and Phra Phirap are among them.

The second zone showcases a rare series of 108 rishi-inspired resin masks that signify morality, according to legend. You can find Jivaka Komarabhacca, who was the personal physician of the Buddha, nine naga-headed Anantanagarat, and Sattabongkot wearing a lotus-like headdress.

The third zone has 374 khon masks inspired by characters from the Ramakien epic such as Tossakan with his gold face, Hanuman after being ordained and Phra Phinai who is Ganesha's younger brother.

Also on view is a rare edition of special characters and Himmapan animals like the boar Varaha, the bear Chompu Mee, the buffalo Thorapee and Thorapa, the gecko Soraphu and the crab, the avatar of Tossakan. A mask of a white Erawan elephant with 16 heads, Indra's conveyance, is another highlight.

Apart from khon masks, there is also a display of puppets depicting scenes from Phra Aphai Mani, including Phra Apai Mani and the mermaid escaping Phi Sue Samut. It's now expanding its collection to other folk tales such as Pla Bu Thong, Nang Sib Song and Lilit Phra Lo. 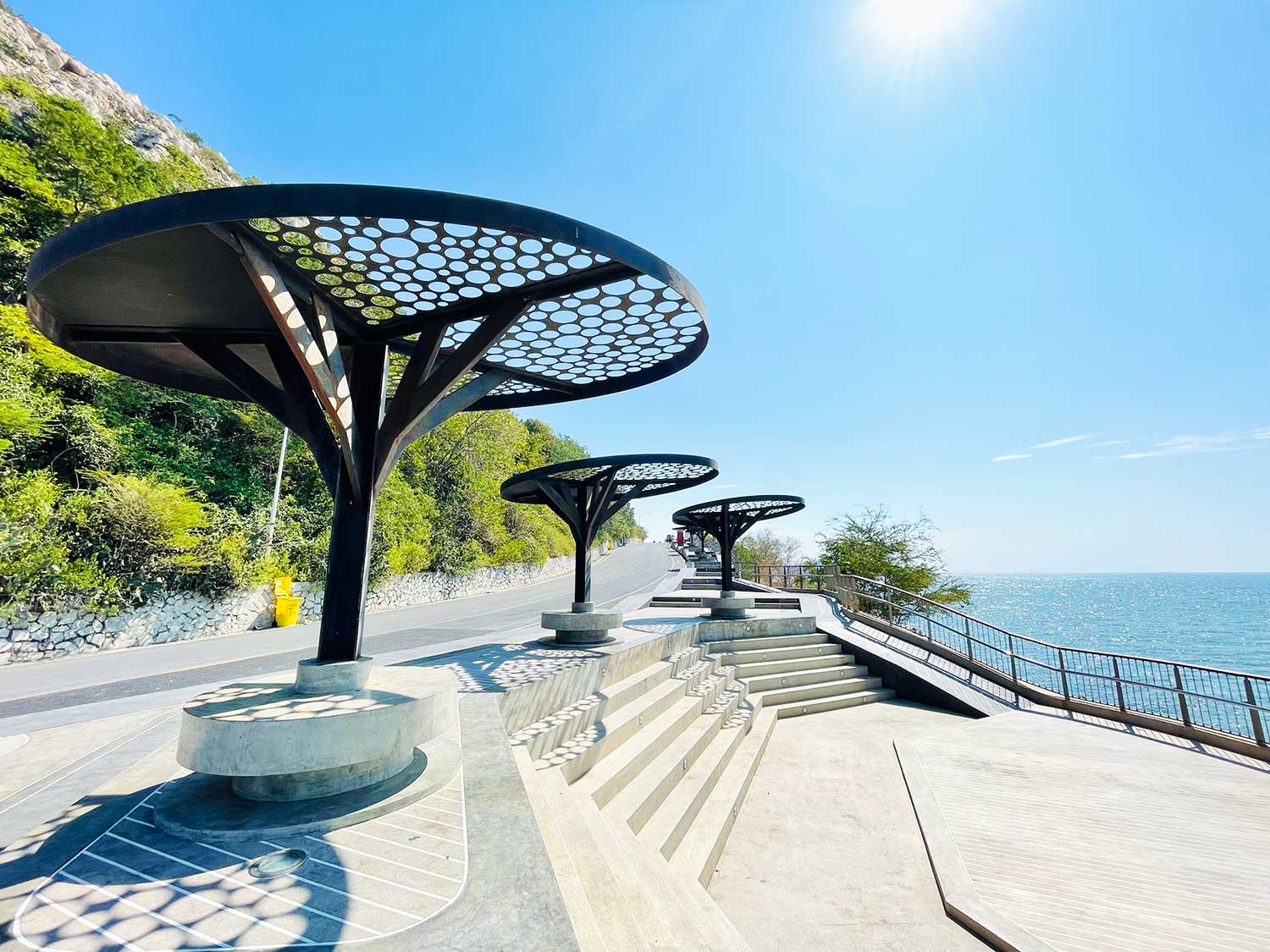 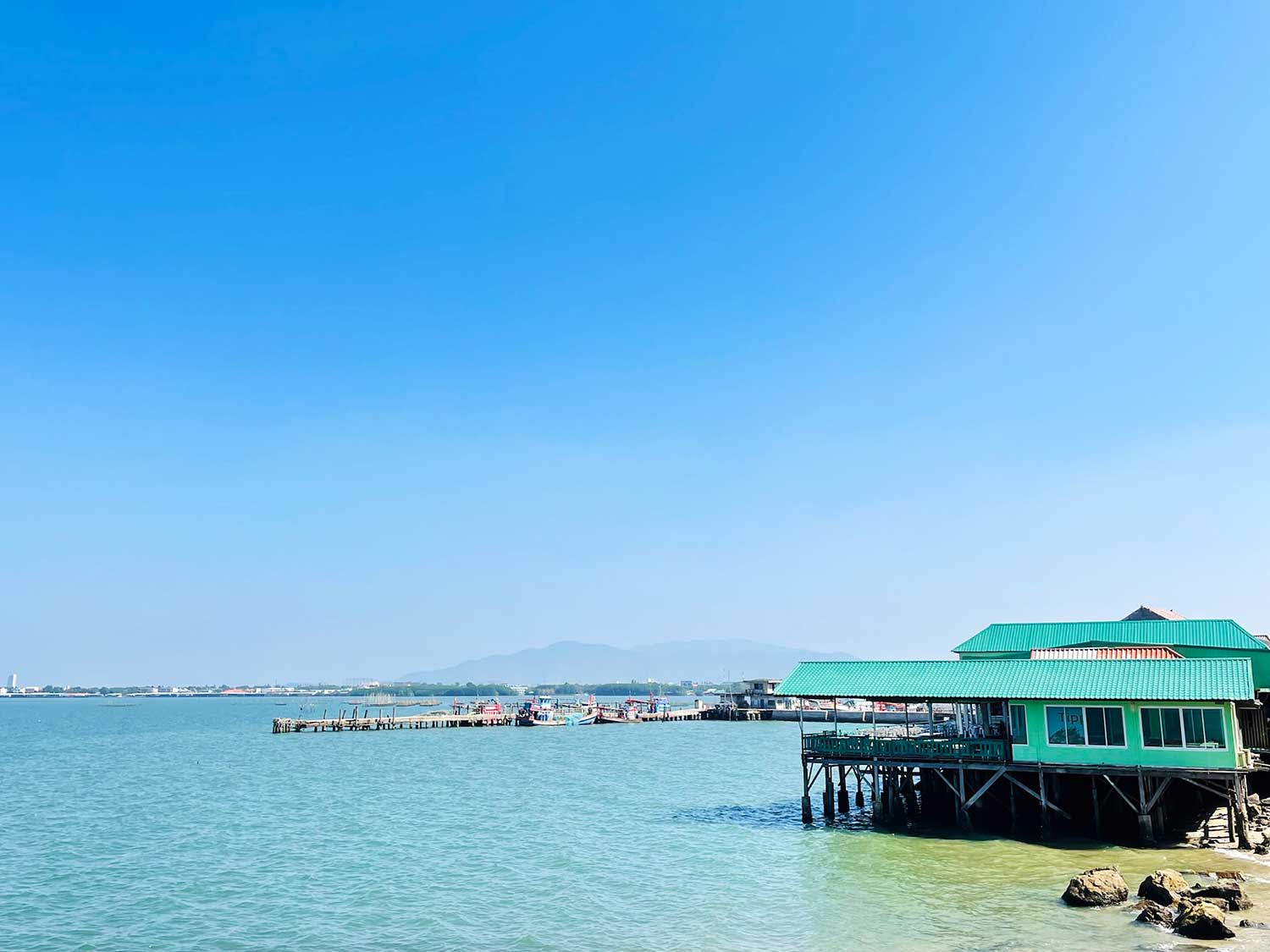 The viewpoint on Khao Sam Muk has become a new tourist attraction.

"We're developing QR codes and interactive activities so that young visitors may use their smartphones to learn about Himmapan animals and Thai literature," Kampon said.

Leaving the realm of literature, we're back to the real world and linger in the lush botanical gardens, home to thousands of plants and flowers arranged in various themes to highlight the splendor of nature.

Behind the gate, an elephant camp stands guard and a group of families is busily feeding the beasts, while massive grounds look like an art gallery, showcasing several kinds of cactus and fern in different forms.

A web of lengthy skywalks leads us to the Stone Forest, Stonehenge Garden, Butterfly Hill, Mammoth and Flamingo Gardens.

I saved my energy by riding a tram to explore the 25 rai Dinosaur Valley, which was added to the list of the Tourism Authority of Thailand's 25 Unseen New Series late last year. It is home to more than 100 life-size dinosaur figures, including triceratops, oviraptors, styracosaurus and cryolophosaurus.

Not far from the Nong Nooch Tropical Garden is Wat Nong Chap Tao known for its beautiful modern religious artworks, which attracts both local pilgrims and tourists. Back in 1937, local villagers donated their money to purchase a 17 rai plot of land and built this temple as a Buddhist memorial. 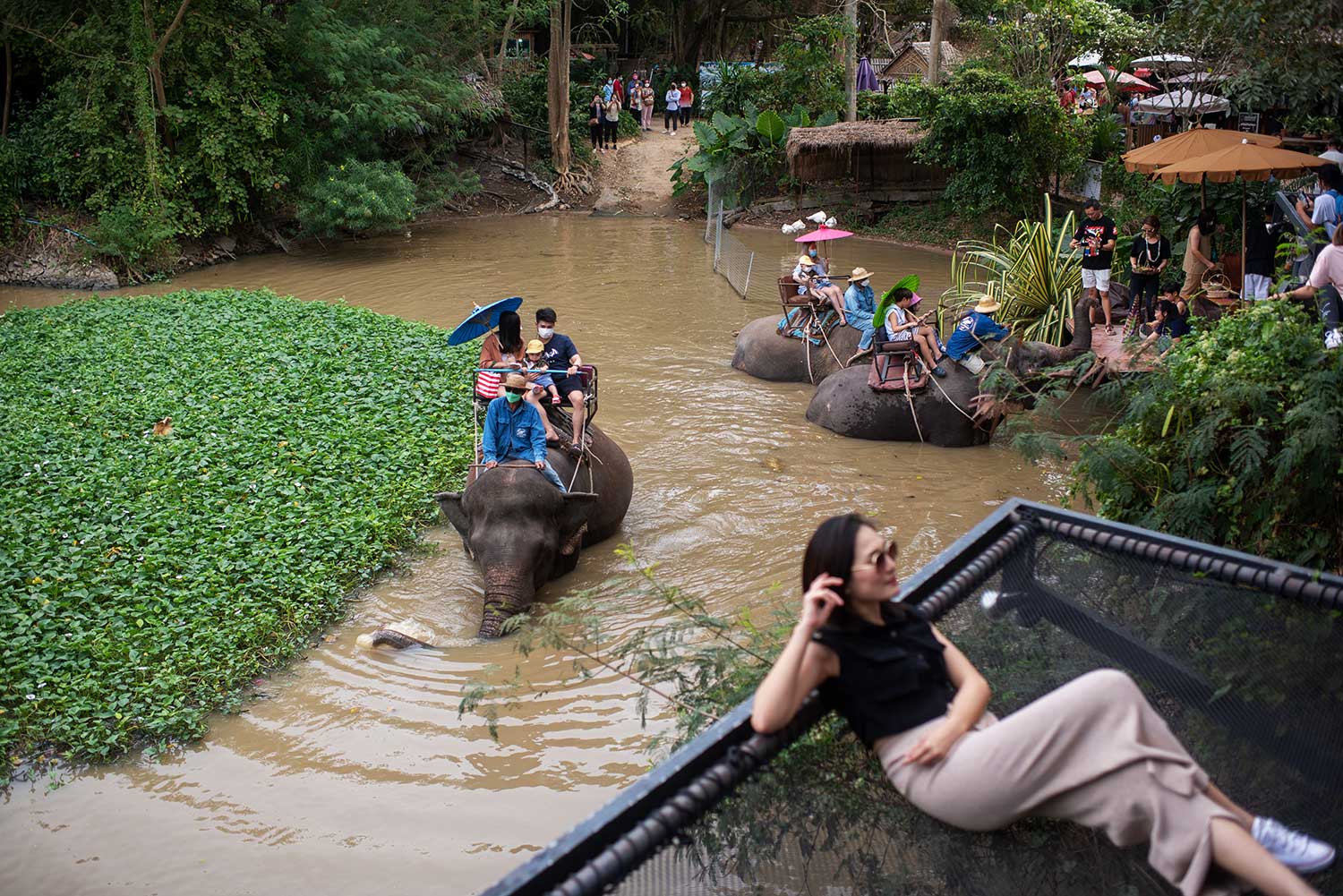 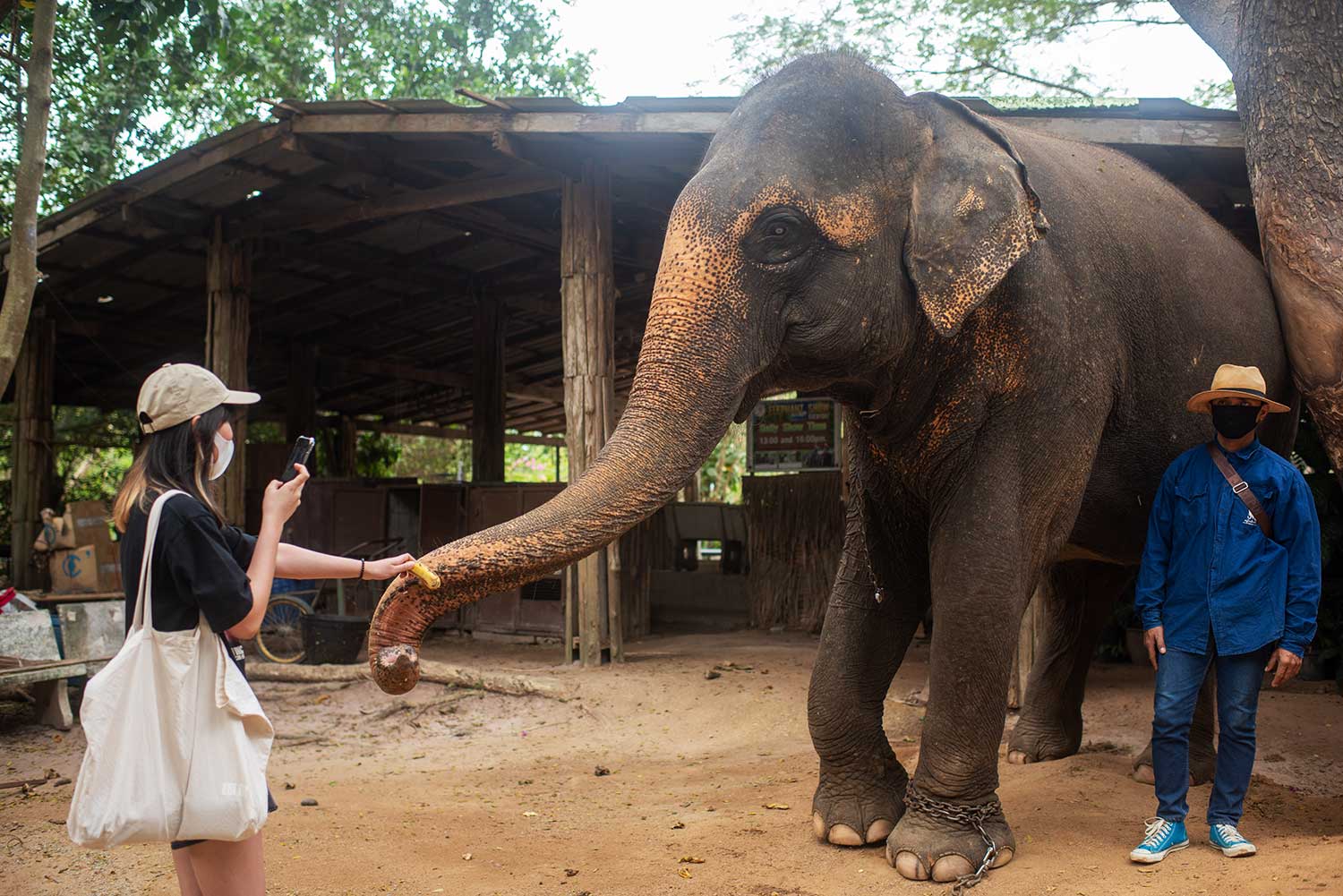 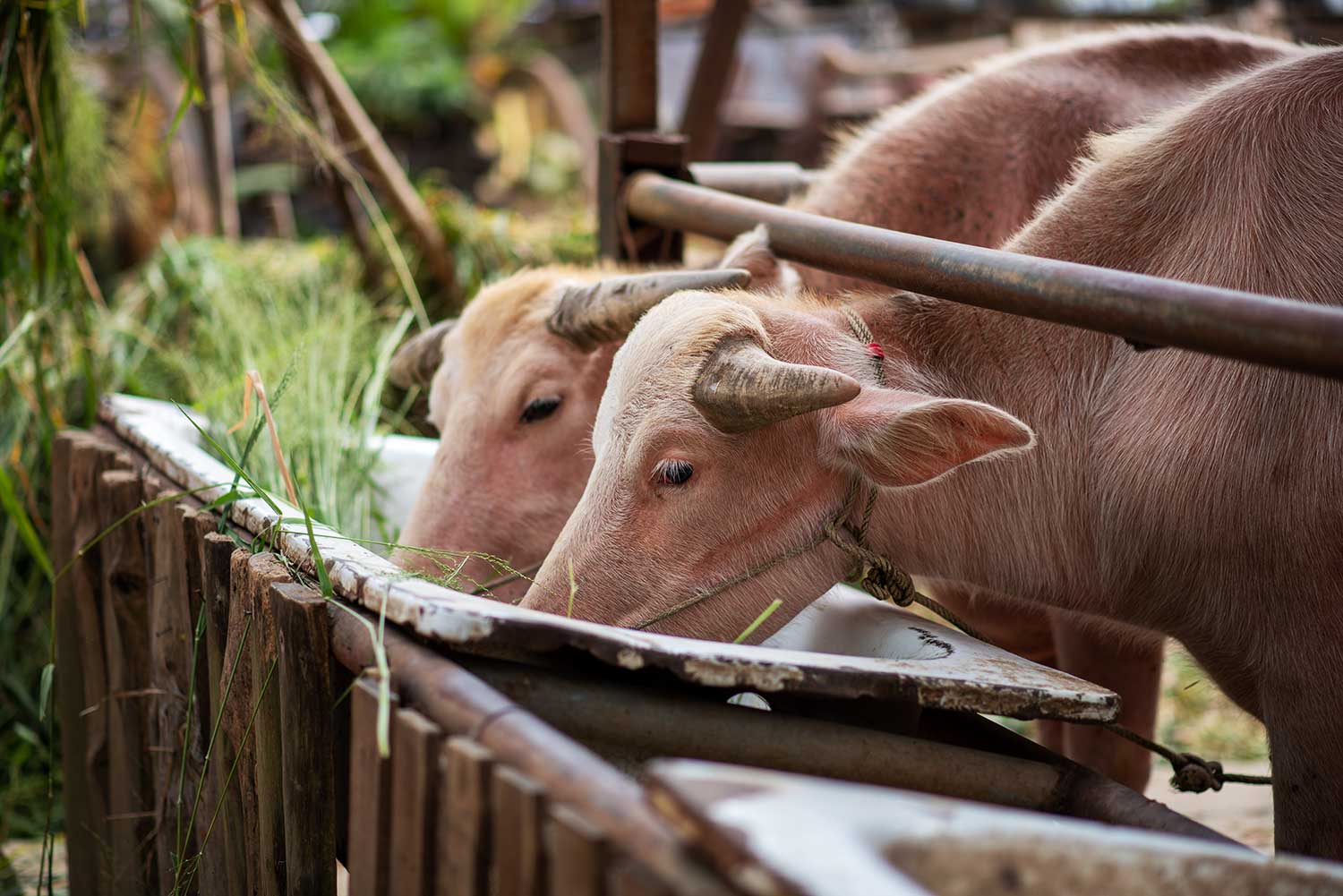 A towering blue and red sculpture of Phraya Tao (the Turtle King) guards the entrance and allows visitors to pray for longevity, protection, wealth and good luck while passing through its stomach.

According to folklore, a Chinese junk sank and left a group of sea merchants stranded on a deserted island, the home of Phraya Tao. They began killing each other since there was no food and they were starving. Phraya Tao sacrificed itself to provide food for them and its shell was used to ferry merchants back to land. The merchants then created a Phraya Tao-inspired painting to express their gratitude.

On the other side, a pair of mighty naga-like sculptures serves as doorkeeper and a bridge leads visitors to a dramatic white ubosot decked with bas-relief naga-like sculptures, with the ground mimicking a river, which the stone boundary markers are bringing up from the lotuses. Inside, a principal Buddha image is enshrined on a massive colourful naga-like base.

Just outside downtown Pattaya, the Pattaya Elephant Village has converted some of its space into the Mong Chang Cafe, where visitors can escape the concrete jungle and relax in an exotic safari-style ambience to get closer to nature. 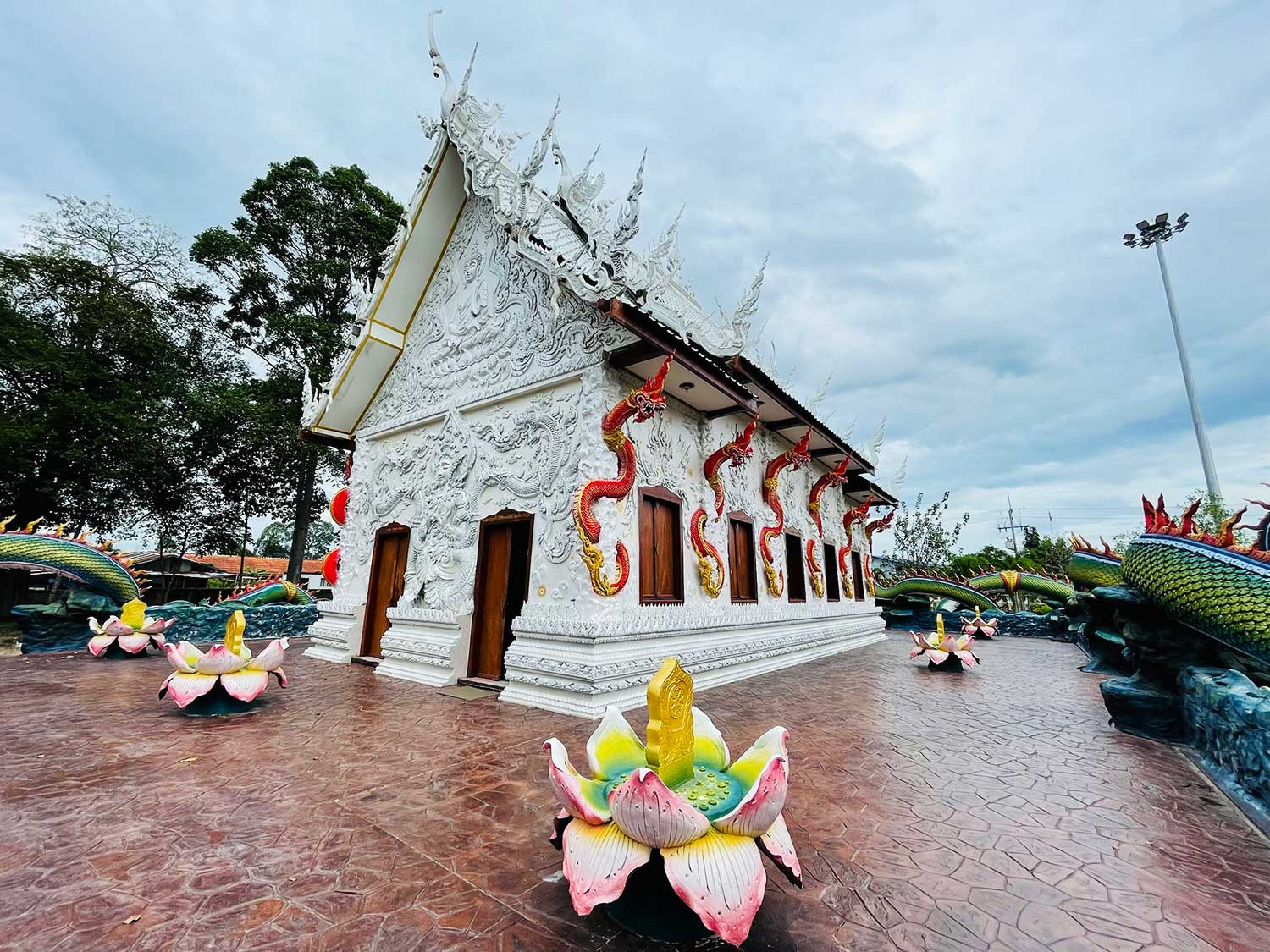 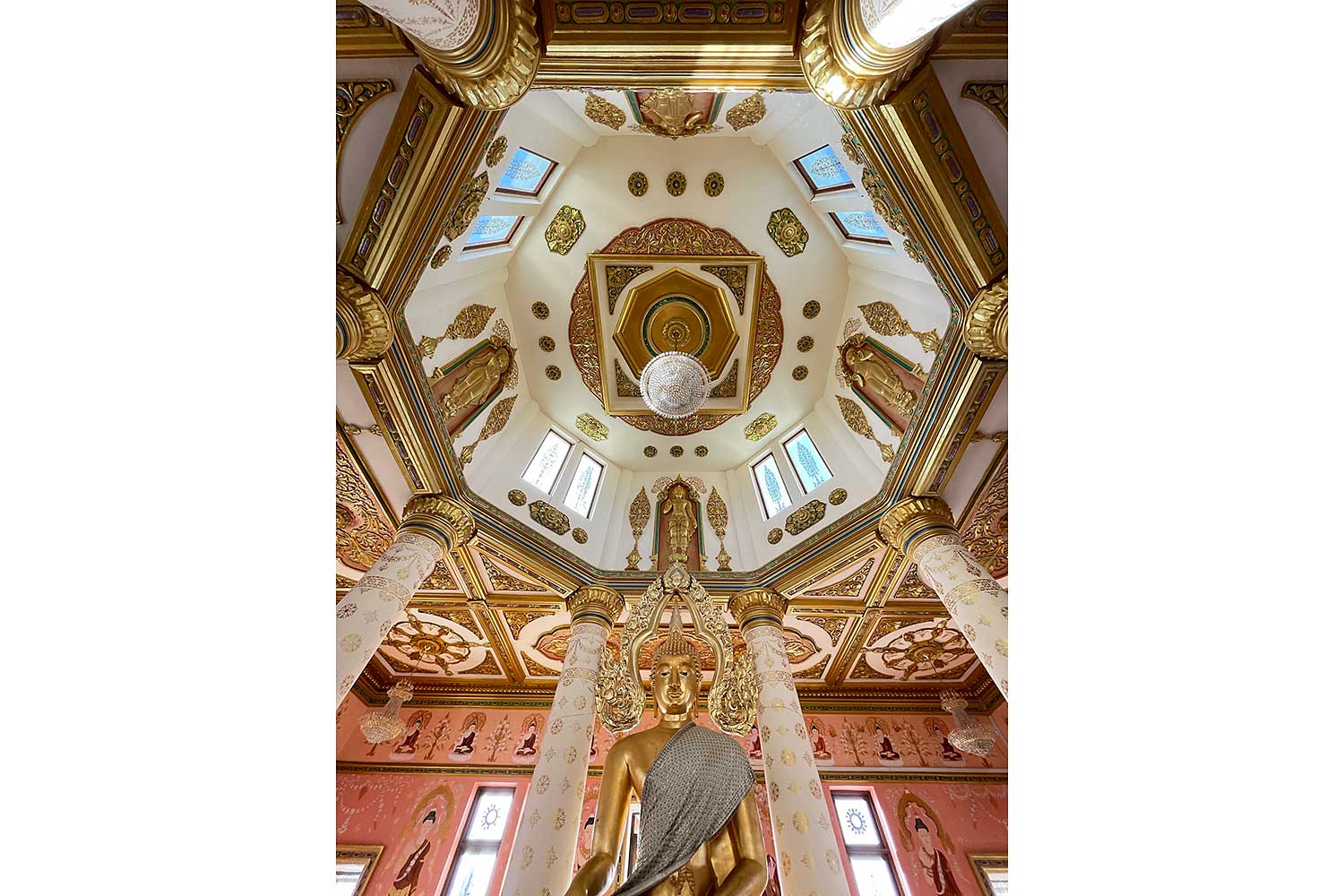 Purimprud Chaiyakham set up this cafe mid last year to help her family business survive the recession, while also educating people about wildlife. Surrounded by lush greenery, a herd of 20 elephants serves as receptionist and visitors may tip them with fresh bananas, while young visitors can learn how to feed a flock of sheep, goats and deer.

Overlooking a large pond, a two-storey open-air dining area is designed to resemble a tree house, where visitors can relax on giant hammocks and sip refreshing herbal drinks, or savour Thai delicacies while watching elephants go about their daily routine. Based on an eco-friendly concept, the cafe has banned single-use plastic bags and all food is served in tiffins.

"Visitors can register to ride them and observe their daily activities. An elephant weighs 5 tonnes and can carry 500kg. They need 200kg of food and 200kg of water, so they need to walk and have routine exercise. We have traditions and methods to take care of them," Purimprud said.

My journey continued the next morning at Bang Saen Aquarium, which evokes my childhood memories. Situated in Burapha University's Institute of Marine Science, it has long been popular with local families since 1970 and its exhibition is divided into six zones to educate young explorers about marine ecosystems.

The Coastal Life zone demonstrates how the sea level fluctuates on a regular basis, once or twice a day depending on the impact of the Moon and Sun. It's designed to resemble a coastal area complete with rocky beaches and tidal pool that is home to shrimp, tigerfish, hermit crab and beautiful sea anemone.

A flock of coral reef, jellyfish, snakeskin gourami, clown fish, moon wrasse, butterflyfish and longfin bannerfish take over the Colours of the Sea and Kitchen of the World zones. However, the highlight seems to be a thrilling diving show, in which young visitors can take a ringside seat to explore the underwater world and observe how veteran divers feed sharks and other giant fishes.

Back on Bang Saen beach, I arrived at Wat Saen Suk Suthi Wararam that is home to Maha Chedi Ket Kaew Chulamani Asana Suk Maha Wihan, a new tourist attraction. This turquoise building is embraced with a cobweb of seven-headed naga bridges and inside the walls are covered with beautiful murals depicting Lord Buddha's life.

To round off my trip, I climbed to the summit of Khao Sam Muk, where a group of local monkeys escorted visitors to the viewpoint overlooking the ocean and a fisherman village. Its landscapes were recently refurbished to give a modern look that allows tourists to imagine they're in South Korea, making it a new popular picturesque backdrop for taking selfies.