Southeast Asian countries are well placed to accelerate the growth of the digital economy, but key obstacles led by a technology disparity have to be addressed first, the World Bank says.

With new technologies and the internet of things (IoT) becoming increasingly pervasive, governments see an ever more urgent need to tap into this megatrend and ensure their countries are not left behind by the digital revolution.

Financial technology investment in Asia, for example, exceeded North America's in 2016 by US$7.2 billion, showing the growing importance of technology on this continent. Asean, in particular, shows huge potential. The consultancy AT Kearney has estimated that digital economy-related activities in the region generated $150 billion in annual revenue.

Although areas such as e-commerce are still relatively underdeveloped, and variations in growth rates exist for different technologies, there are bright spots including online retail, which has been forecast to grow as much as 25% annually, according to a management consulting firm.

"People are spending a lot of time on the internet," she said. "There is huge social media penetration. … It is very much one of the world's most vibrant regions for the digital economy."

She made the comment at the launch of the bank's latest report "The Digital Economy in Southeast Asia: Strengthening the Foundations for Future Growth". It notes that internet users in Thailand and Indonesia spend 4.2 and 3.9 hours a day on the mobile internet, respectively, far beyond the 2 hours spent in the US. 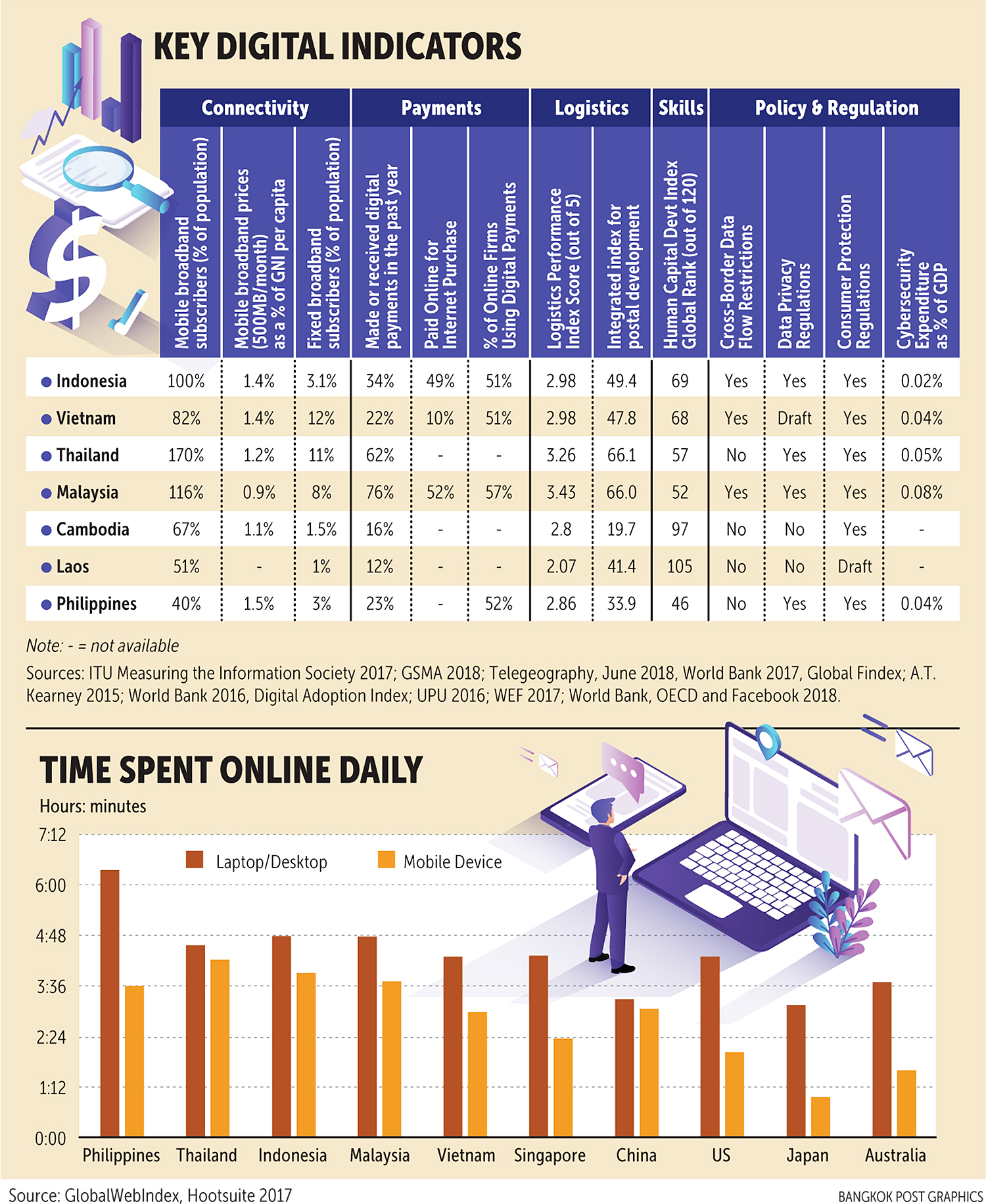 Social media use in Southeast Asia was up 31% in the past year. Given that social media use is "widely considered a precursor to more economically productive technologies", there are clear reasons for optimism.

Digitally enabled businesses are also growing very quickly, said Ms Beschorner, adding that larger companies have been successful in "pushing the digitisation of their business processes".

Although digital adoption by Asean businesses overall remains low, with only 31% of firms reporting having a website compared with 66% in China, the report says businesses that do use digital technologies "do so to a greater extent than comparable firms in other economies".

All 10 Asean countries now have digital economy master plans or varying scope. According to the report, Thailand's is potentially the broadest as it is "modelled after Japan's Society 5.0" and "situated within an even wider Thailand 4.0 initiative". Malaysia, Indonesia and Vietnam have chosen to "focus explicitly, at least for the time being, on developing the e-commerce sector".

One area where governments have been proactive is digital IDs. Currently, Singapore is the only Southeast Asian state with a digital ID system that can facilitate online transactions, but similar development is taking place in Brunei, Thailand and the Philippines.

Pichet Durongkaveroj, the minister of Digital Economy and Society, also expressed optimism about Asean's ability to cooperate on regional goals related to the digital economy.

Although he believes that the Asean ICT Masterplan, a five-year plan that aims to facilitate the transition towards a digital economy, is "a little outdated", Dr Pichet says a number of exciting regional initiatives are forthcoming.

One of them is the first Smart City conference that will be held in August, where representatives from 26 Asean Smart Cities will convene in Thailand to discuss their prototypes and experiences.

However, experts say many challenges will need to be tackled to make greater integration into the digital economy a reality across Asean.

The digital divide is a particular concern, given the wide disparity in levels of broadband penetration across Asean. "There's a lot that governments can do to facilitate broadband access," said Ms Beschorner, such as infrastructure sharing and promoting quality of service. Ninety percent of the region's internet users in Asean are in just five countries: Indonesia, Malaysia, the Philippines, Thailand and Vietnam.

Indeed, other indicators also show that the digital disparity within Asean is considerable. For example, 58% of all funds raised by e-commerce deals in Southeast Asia were raised in Singapore, while deals in Malaysia, Thailand and Vietnam amounted to less than 10% of the total. More digital skills development within the Asean workforce is also crucial and that could start with encouraging children to learn how to code, said Derasack Teso, Microsoft's director of corporate, external and legal affairs. Better English education is also needed as many technology-related educational resources are not offered in Asean languages, he added.

Lack of rucial cyber regulations is also a concern. Mr Derasack said businesses "need regulatory certainty" on issues such as data storage. According to the report, Asean countries have less developed legal regulations on data privacy when compared to those for electronic transactions.

But with regulation comes the parallel need for governments to have enforcement capacity. "What governments can do is take a leading role in ensuring that the online transaction environment can be trusted," said Piyanuch Wuttisorn, secretary-general of the Thai Office of the National Digital Economy and Society Commission at the DE Ministry.

The report also report noted that while Asean regional blueprints recognise the importance of regulatory harmonisation, there are still "no concrete principles for how regulations need to be extended and harmonised to create a single digital market".

Where regulation is concerned, a balance between "protection but not suffocation" is needed, said Jane Treadwell, the World Bank's practice manager for digital development.

In any case, all the experts agree that inclusive development will be the key.

One of the core pillars underpinning Thailand's digital strategy is inclusiveness, said Dr Pichet -- the notion that "no one must be left behind". To him, "digital for development is more important than just digital development".

Ms Piyanuch also echoed that sentiment. She said Thailand 4.0 is trying to make use of digital technology for growth and well-being, with an emphasis on inclusivity.

This inclusiveness, of course, will be difficult given the rapid pace of change, and there is the need to ensure that everyone is learning. In this age of technological disruption, she said, "We need to be kind to each other."