Bangkok Art and Culture Centre hasn't seen this many visitors in quite a while. Today people are everywhere in the exhibition space on the 9th floor even though it is a weekday afternoon. They have never been so involved with the artworks on display and careless as to what other visitors might think of them.

On a two-seater chair, a woman isn't exactly sitting, for her legs are pointing skyward, head hanging down. A young couple, standing still on a platform nearby, is crammed in a giant sweater that fits them both.

In this recently opened exhibition "The Philosophy Of Instructions" by Austrian artist Erwin Wurm, are sculptures -- from texts, videos, photographs to even visitors coming to see the show.

The two-seater chair, entitled Spaceship To Venus, is only complete as a piece of sculpture when a visitor settles down in an upside down position as instructed by a simple drawing on the platform. This is just one of many pieces of Wurm's best-known series "One Minute Sculptures".

Installed at the beginning of the show is Erwin Wurm: The Artist Who Swallowed The World, which takes us on the artist's journey as he installs his works in galleries all over the world and sits down to talk about his art. Since the late 1980s, he has developed the ongoing "One Minute Sculptures" series, which feature himself or his models posing in weird and humorous positions with everyday objects.

Curator Pichaya Suphavanij said the concept behind this particular series is quite complex. First and foremost, Wurm's idea of sculpture -- visitors holding still as instructed for a minute -- goes against what's traditionally taken as a form that will last forever.

His sculptures are in a constant state of transformation. As soon as the young couple had the photo taken, the giant sweater is left flat on the ground and suddenly that clothing item has lost its momentary status as an art piece. For another piece, two stools are placed on the platform and the sculpture is realised by asking visitors to simply stand still on them and "be the eighth wonder of the world".

"In terms of the art form, Wurm was trying to overcome what art was at the time," said Pichaya, referring to the formalist forms and movement of rigid European art at the time Wurm started out his career. "The origins of all his works, whether installations, photographs or videos, come from basis of creating a sculptural form."

What's persistent in all his works is the lightheartedness both in the visual of his works and the personality of viewers who act as his models. On one platform, for example, viewers are instructed to take up philosophy books and place them between their legs and hands and hold still.

"On another level, he plays with the idea of art and authorship by letting viewers take up the role as an artist themselves," Pichaya adds. "It's so smart because at the same time he's the one directing the whole thing through those instructions."

One of the key questions Wurm asks through his art practice is what exactly constitutes sculpture. How long does a certain "action" have to last before it turns into a piece of sculpture?

The work From Men's Size 38 To Size 48 In Eight Days experiments with the idea even further that. On display are pages from his instruction book, which guide Wurm on how he goes about his daily diet and activities each day in order to increase his weight.

Pichaya said that the artist intends that viewers read these menus so intently that they feel as if their bodies are actually filled with the food and thus become sculptures themselves through the act of reading.

In the exhibition text, the current political and social climate is referred to as something which paves "the context for the exhibition to broaden beyond existing boundaries to reassess current issues at hand in their contemporaneous entirety".

Viewers here, however, need not look further outside for Thailand is in perhaps the most pivotal transitional period in its modern history. Wurm's way of encouraging new ideas and thoughts is through a sense of humour, irony and contradiction.

"It's very important for us now to go back to the fundamental," said Pichaya. "Wurm's works are about deconstructing something but also building it up again, destroying going hand in hand with creating. And it's only with a sense of humour that enables us to speak about a certain sensitive issue."

"The Philosophy Of Instructions" is on view on the 9th floor, Bangkok Art and Culture Centre, until Feb 26. 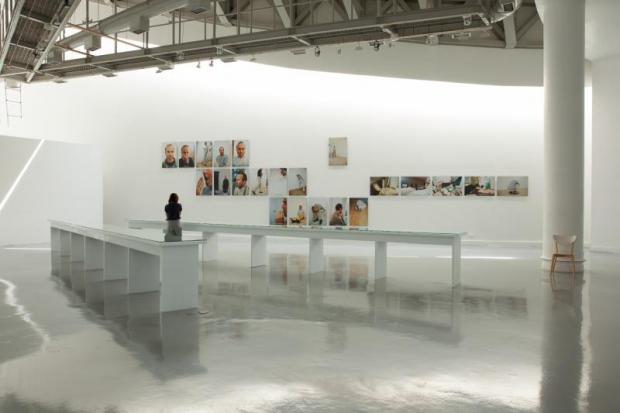 'The Philosophy Of Instructions'. Photo courtesy of Bangkok Art and Culture Centre