The romance of the Siamese war elephant
Life
Arts & Entertainment

The romance of the Siamese war elephant

Scholar who wrote Yuan Phai, The Defeat Of Lanna reflects on glory and the ancient beast

'Some so superb surpass a city's worth."

In Siam's epic war poem, climaxing at a battle in 1475, there is no doubt who the heroes are: the war elephants.

In the description of the army marching to battle, the longest passage is devoted to the elephant brigade. Some 60 tuskers are described with names in the sacred Pali language, with capsule descriptions of their beauty, strength and skills. By comparison, only three human soldiers are mentioned, and none is described or praised. 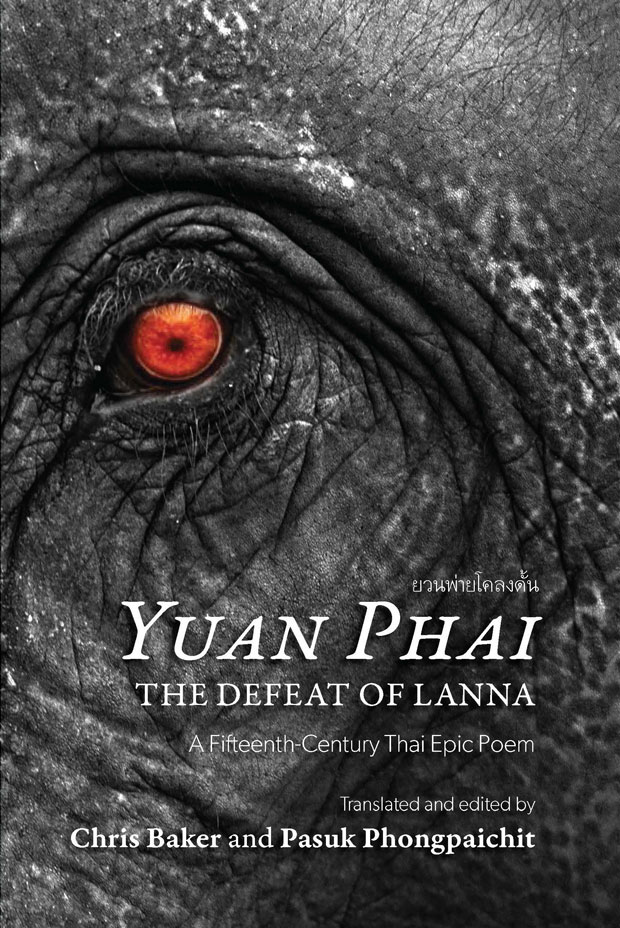 Yuan Phai, The Defeat Of Lanna, is possibly the earliest work of Siamese literature, written soon after the 1475 battle by an unknown author. The 1,200 lines of verse begin with an elaborate celebration of King Trailokanath of Ayutthaya, describing his extensive knowledge, his religious devotion, his martial qualities, and his skill in poetry and debate. The poem then summarises the history of Trailokanath's reign, with many facts not found elsewhere. It then gets to the main story. In 1474, Lanna seizes the town of Chiang Chuen or Chaliang, now in the Si Satchanalai Historical Park. King Trailokanath assembles an army of 26,000 men at Phitsanulok and sets out to retake this strategic border town.

Yuan Phai is the only martial epic in Thai before the 19th century. The account of the army marching to war, extending over 350 lines, is probably the best description of an army from old Southeast Asia. It describes many kinds of boats transporting the force up the River Nan. It lists the weapons and siege devices. It sketches the elegant cavalry horses with "tails so long they flick their neck and chin". It describes the uproar created by a vast horde that "overflows the road, the plain, the world".

But the highlight is the elephant brigade, 1,000 strong. The individual descriptions stress just how imposing the elephants look. One has a "trunk down to earth and tusks that pierce the sky". Another is "shaped to fill a foe with fear". And some are as beautiful "as if by artists drawn". The king's own mount is "sky-tall -- it seems the King does fly".

Some are especially imposing because they are in musth: "Phet Phra-In, ferocious beast, now leaking oil both sides from cheek to tail", while another is "black with oil, agleam like wings of bees". Some are known for their invulnerability to weapons as well as their fighting skills: "Banphumi Monthon, safe from pike and gun, has caught attackers, pounded them to death."

Their presence is heightened by their glittering decorations, "with howdah straps, looped round, encased in gold, gilt-inlaid belly straps with tassels hung, rear straps, neck ropes, tail cords, and stirrup thongs, pair-yoked both front and rear with golden silk; their backcloths and their covers brilliant; their trunks and tusks agleam with ornament; above, regalia that dazzles eyes; and howdahs, saddles, jewelled seats, gilt thrones".

This was not merely poetic enthusiasm. Over those past few decades, the elephant transformed warfare. Before this time, kings and nobles had ridden elephants to war, but the numbers were rather few. In the early 16th century, the Europeans' estimate of Ayutthaya's number of war elephants jumped from 400 to 10,000. Probably the increase came a little earlier.

This massive increase was a result of intensive hunting. Kings led hunting parties with thousands of men. Large bounties were paid to freelance hunters. So many of the so-called "white elephants" were found in this era because there was so much hunting.

The elephants were in demand because they transformed warfare in several ways. First, they carried equipment, especially the heavy gear used in siege warfare. Armies could now roam farther afield. Second, they carried the king and nobles above the fray. While weapons were swords and spears, a few extra feet of height made a big difference. Third, they were simply terrifying at the charge, especially when in musth or crazed by drinking gallons of liquor.

At the climax of the battle in Yuan Phai, an elephant wins the day by toppling the elephant of the enemy commander.

This scene is repeated in the most famous elephant duel in Siam's schoolbook history, King Naresuan's victory at Nong Sarai, over a century after the battle in Yuan Phai.

In truth, by that time, the heyday of the elephant had passed. The tuskers were often panicked by explosions. As guns became a bigger factor in warfare during the 16th century, the elephant's role in battle was reduced, though they remained important for transport and display. The account of the duel at Nong Sarai is a period piece, an essay in nostalgia.

The Yuan Phai epic displays the Siamese war elephant at their peak, "some tall and stout resemble statues cast; some so superb surpass a city's worth".