Ghost in the machine

French director Olivier Assayas sees great similarities between the world of digital and the world of the spirit. All of us, he said, communicate with the invisible -- through our phones or through a spiritual medium.

Assayas was in Bangkok last week to speak at Alliance Francaise on the launch of his new movie Personal Shopper, a seductive, light-footed thriller as well as a ghost story. In the film, Kristen Stewart plays an American in Paris called Maureen. She is the personal shopper of the film's title, who runs errands and picks up expensive clothes for a supermodel. Maureen is also a medium -- a woman with sensitive antennae that let her contact the dead -- who's trying to reach out to her deceased twin brother.

Premiering at Cannes last year, Personal Shopper won Best Director for Assayas, one of the most versatile and thoughtful filmmakers, who re-examines cinema, images and storytelling with intellectual elegance in films such as Irma Vep, Demonlover, Sentimental Destiny, Clean and Boarding Gate. This is the second film on which the director has worked with Stewart, after Clouds Of Sils Maria (2014), a drama that led to the ex-Twilight actress becoming the first American to win a Cesar Award, or the French Oscar.

In an interview, Assayas talks about ghosts, the hypnotic quality of the phone screen, and why Stewart is "too smart for the American cinema".

Since you're in Bangkok, the land of so many ghost films, how did you approach the concept of ghosts in Personal Shopper?

I think I approached it by also trying to question it and make sense of it in my own way. When you make a movie about the invisible -- about how we connect with something we believe in -- it has to do with faith and some sort of spirituality, so it's about questioning the place in our life or how we relate to it. European culture has moved away from these things -- from spirituality, religion.

Personal Shopper deals with a character at a specific moment in her life, when she needs answers on how to deal with the death of her brother and how to deal with the process of grieving when she hopes to reconnect with the person she's lost -- all of this considered irrational -- it's considered crazy -- from the European mentality. But in fact we all have to deal with this whether we're from the East or the West. So I suppose the character has to find her own answer, the same way I suppose everyone in this world has to redefine how spirituality has its place in his own life.

So the East has a different idea about ghosts and how that's connected with the loss of our loved ones?

Yes, in a sense. I'm not commenting on religion. I mean it in terms of what to do with the death. In the East there's a sense of social solidarity around shared beliefs that gives answers that are there to help you when you grieve. Western materialism deprives you of those answers, destroys them and gives you nothing in return except the infinite, cold materiality of the modern world. Maureen struggles with that.

Not to spoil the ending, but the film ends not in the West.

The film ends in the desert! The idea is to wipe the slate clean. 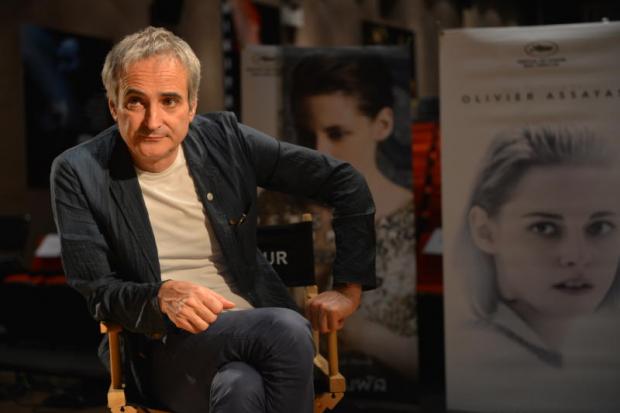 At the same time, Personal Shopper deals heavily with digital communications -- Maureen's dependence on her phone, a chat programme and Skype. In a way, the world of digital and the world of the spirits may have something in common, because both are invisible to us.

It's about how we live simultaneously in the tangible and intangible world, in the visible and invisible world. For many reasons, we consider what we're 'seeing' as the totality of reality. We watch something and we transform it and it becomes our reality. But that reality is made of the material combined with our own subjectivity, imagination, prejudices -- half of it is visible and half is invisible. It's exciting for cinema to try to deal with the presence of the invisible because it's essential to our perception of the world.

One of the things the film deals with is the supernatural. But the way we live is supernatural anyway -- the tools of communication we have, the way we interconnect through invisible waves -- all of this is pretty unnatural. It's only marginally less weird than connecting with the dead.

I believe we're the first generation in the history of mankind to have access to the totality of human memory -- history, science, fact, fiction, art, whatever, it's all there.

How can cinema fit into this new consciousness?

It's a big question, and like all big questions I can only try a simple answer. Cinema is not one more image. All images are not of the similar nature or of similar status. Cinema is the one image that can look at other images -- the same way cinema is the art that can look at other arts. In that sense, cinema is an area where we can experiment in how to reproduce our perceptions. I don't think other images can do that, at least not in the same way.

The scene on the train when Maureen has a long exchange of chat messages with a stranger, or a ghost, is interesting. You design the scene with no dialogue and only Maureen staring at the phone waiting for the next message.

[It's a way to convey] the loneliness of the character. I was also interested in experimenting with how far I could stretch the text-message conversation. I think it has a very powerful tension, and I was interested to see if I could transcribe that in the film and use that tension as a dramatic tool. I filmed the phone screen [instead of pasting the text on the movie screen the way many movies like to do] to show the experience of watching the screen -- our fascination with the phone screen.

This is the second film you've done with American actress Kristen Stewart, after Clouds Of Sils Maria. Coming out of the vampire Twilight films, Stewart is like a totally different actress in your films.

Kristen is not just another American actress. She's a remarkable actress, extremely talented, she's a rich and complex character. Kristen will make her own film -- she has a short film in Cannes this year and she'll go further. She's very committed and thoughtful. She's too smart for American cinema.