Tales from the dark side
Life
Arts & Entertainment

Tales from the dark side

While the anti-government protesters are gathering at the Democracy Monument today to call for constitutional amendments and reforms of the monarchy, activist Anon Chawalawan marks the 47th anniversary of the Oct 14, 1973, uprising with an exhibition titled "Collected: Unwritten History By Museum Of The Commoners".

On view until Nov 25 at Many Cuts Art Space, which is located in the small town of Chachoengsao, it is showcasing a wide range of T-shirts with mottos, artworks and memorabilia that were once used in the red-shirt rallies and student-led flash mobs. The idea is to recount a history that can't be found in textbooks so that older and younger generations can share experiences together.

"The works on display mostly come from the red shirts and pro-democracy groups. There are two sides in the battle, but we just consider which one is fighting on the logic of how democracy should be in the right way. It's because another side started from disrupting the way of democracy that ought to carry on. They don't care about our reasons," said Arjinjonathan Arjinkit, who operates Many Cuts Art Space.

"We've struggled for a decade and this brought us a huge loss. The battle continues until the country goes to absolute democracy. In fact, we know that it may not be absolute, but the question is how far we can go to achieve a goal."

In 2018, Anon attended the We Walk campaign, marching from Bangkok to Khon Kaen to highlight social issues such as food security, national resources and freedom under the constitution. The marchers, with colour-soaked feet, walked on white fabric to mark their arrival. That scene sparked him to accumulate items from the crowds to set up the Museum of the Commoners on Facebook, which now has almost 6,000 followers. Designed to be a visual archive, Anon has conducted interviews so that people can learn about social history outside a classroom. 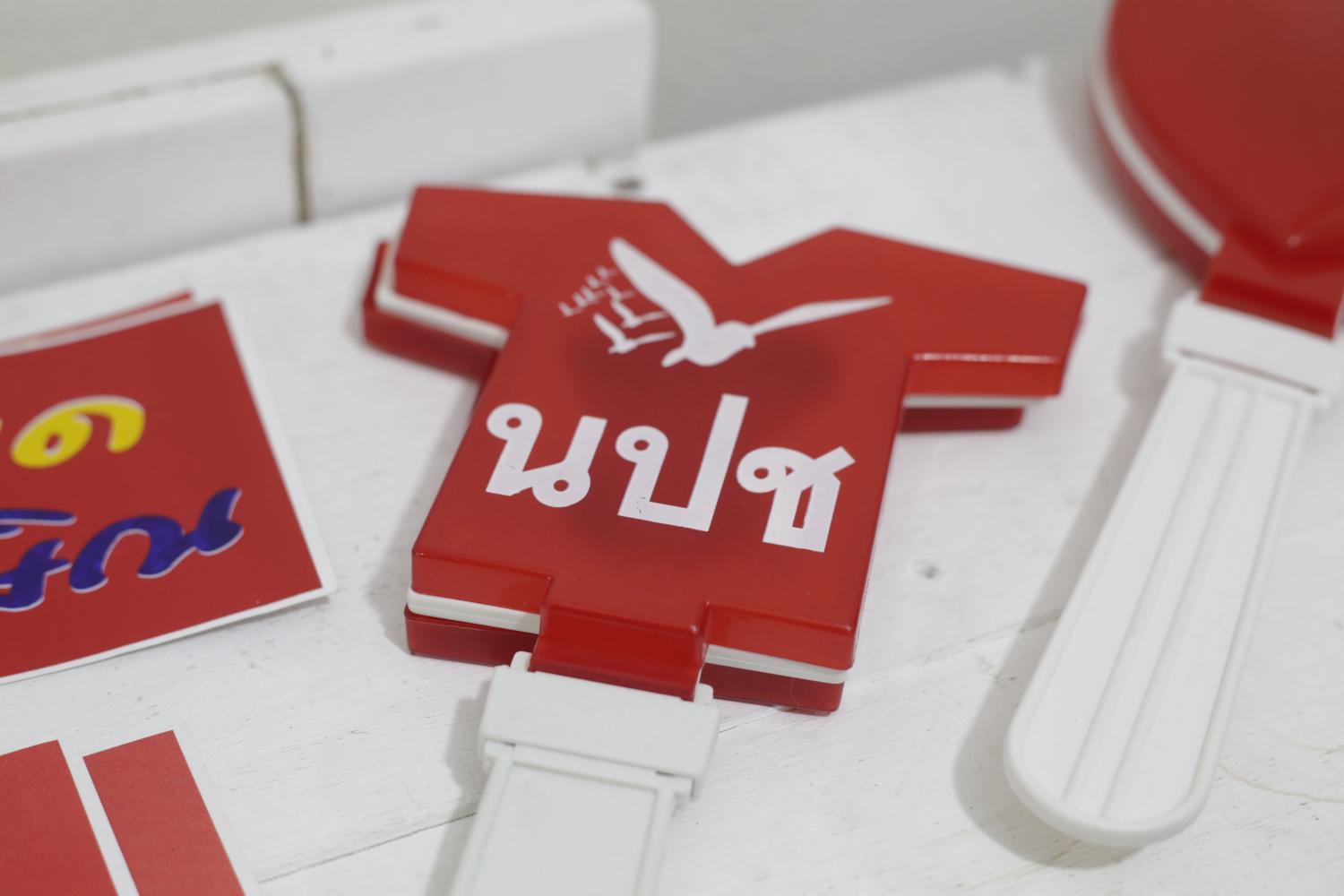 "I've worked at the Internet Law Reform Dialogue [iLaw] and realised that memorabilia from protests was a device to document history. It's different from the history textbooks that focus on the Sukhothai or Ayutthaya periods as well as the stories of the Siamese Revolution of 1932 and His Majesty the late King Bhumibol Adulyadej. There are no dark sides of history in school books. It's hard to see content regarding the Oct 14, 1973, uprising, the Oct 6, 1976, massacre or the Black May uprising of 1992," Anon said.

"School books only present the overall perspectives of Thai political events, but never mention what the protesters were protesting. Therefore, T-shirts and paperboards with messages become jigsaw puzzles to make the picture complete. I got inspiration from the International Institute of Social History in Amsterdam, which has accumulated social movement-related memorabilia in many countries such as the anti-World Trade Organization protests in Hong Kong."

Jumping out of the online platform to the actual gallery, visitors will see replicas of the 1932 Revolution plaque that take you back to the days when Khana Ratsadon, a group of military officers and civilians, staged a coup against King Prajadhipok to transform the political system from absolute monarchy to constitutional monarchy. 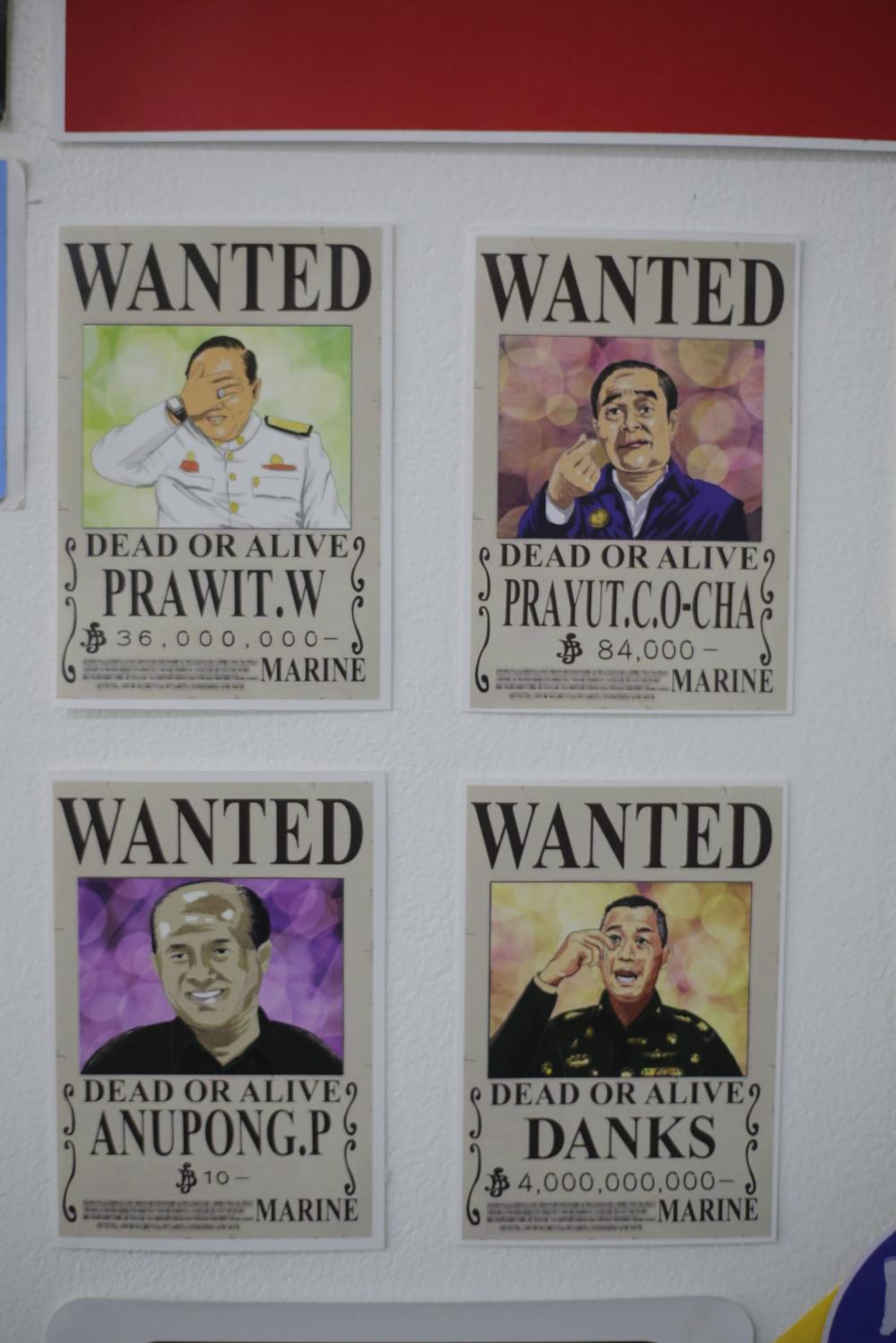 Other highlights are a bloody shirt, which political activist Sirawith "Ja New" Seritiwat wore while being attacked by four men, and a broken loudspeaker, which anti-junta activist Ekkachai Hongkangwan used as a shield to protect himself from unidentified men. These two items are displayed to mirror political violence in the country.

"Inspired by the Indira Gandhi Memorial Museum in India and the Monsenor Romero Center in El Salvador, these two places show original clothing, which renowned pro-democracy activists Gandhi and Romero were wearing when they were shot," Anon said.

"In fact, my collection features meaningful items from several political groups like the People's Alliance for Democracy, the United Front for Democracy Against Dictatorship, the People's Democratic Reform Committee, the Assembly of the Poor and LGBT. Apart from the political centre, I also pay attention to the environment and gender equality. Some stuff is donated by friends and my page followers, who consider my work valuable."

His exhibition illustrates contemporary culture through a series of creative fashion items in different designs, available from both the rally sites and online shopping platforms. Mostly created by artists and university students, T-shirts, brooches and tote bags come with slogans like "Their Bodies Chained, Our Thinking Restrained", "Speech Limit 112", "Do You Hear the People Sing", "History Isn't Kind To Men Who Play God" and "Your Voice Can Change". Also on display are plastic hand clappers, squeaky chicken toys and stickers. 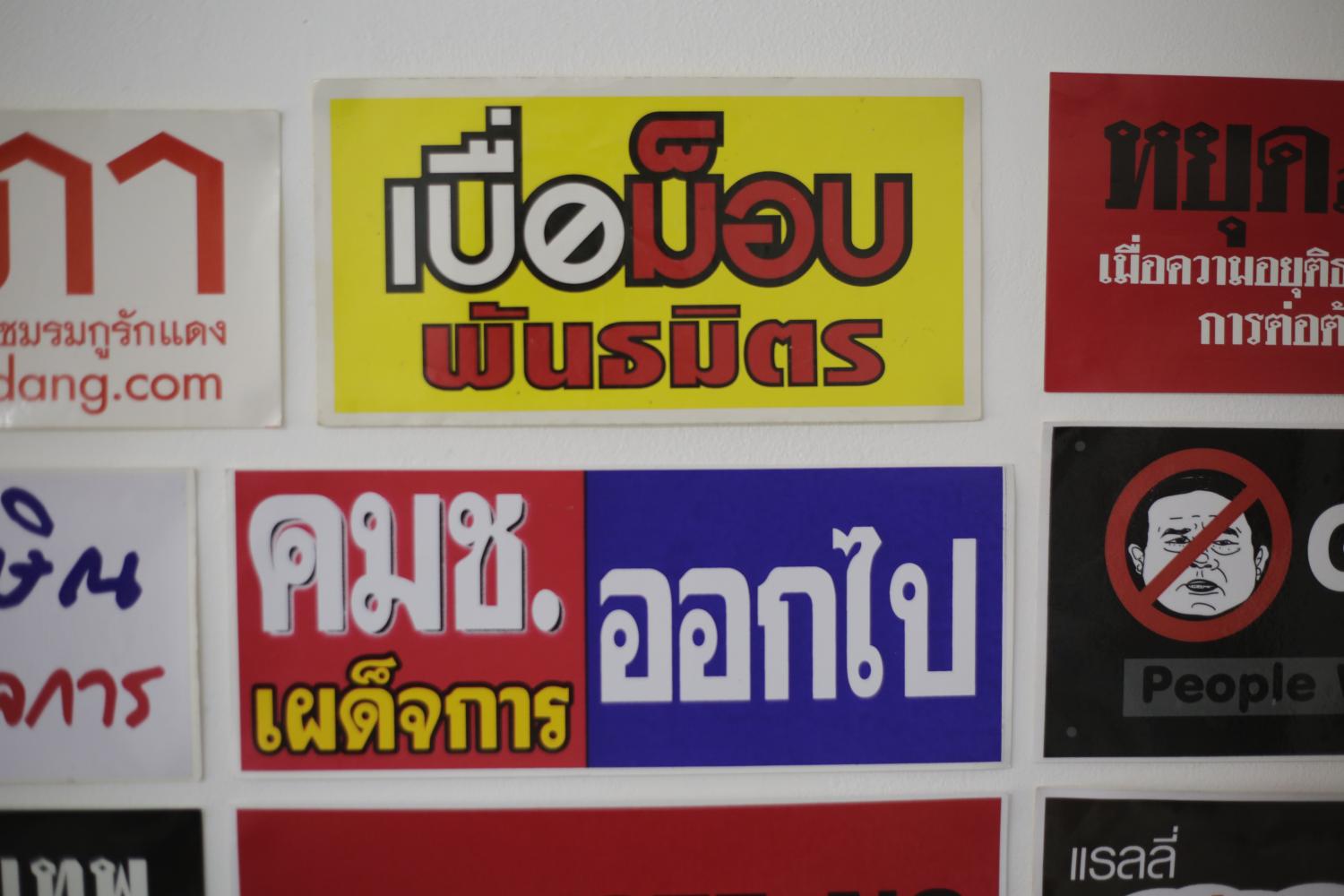 "We can learn how Thai culture has changed through things. In the past, activists handed over copies of political articles at rally sites before T-shirts became a uniform for protesters. Now, young activists play with squeaky rubber chickens, political cartoon Khai Maew and the Japanese cartoon character Hamtaro. It's a cultural transmission between old and young generations," Anon said.

Arjinjonathan noted that T-shirts were initially used to identify who they were like the red or yellow shirts, Thaksin lovers or the group of We Vote No. Now, they have become fashion items, which everyone can afford and wear in daily life. At the same time, the political mainstay seems like a fashion that comes and goes. Everyone can take the stage and become famous overnight. It depends on what issue you're talking about. The stage is wide open when it's relevant to democracy. That's why the LGBTI group joined in a protest to call for gender equality.

"We have the same demands such as constitutional reforms, so everyone can design their own shirts to share some fun ideas with others. T-shirts already with catchy messages become popular collectibles," Arjinjonathan said. 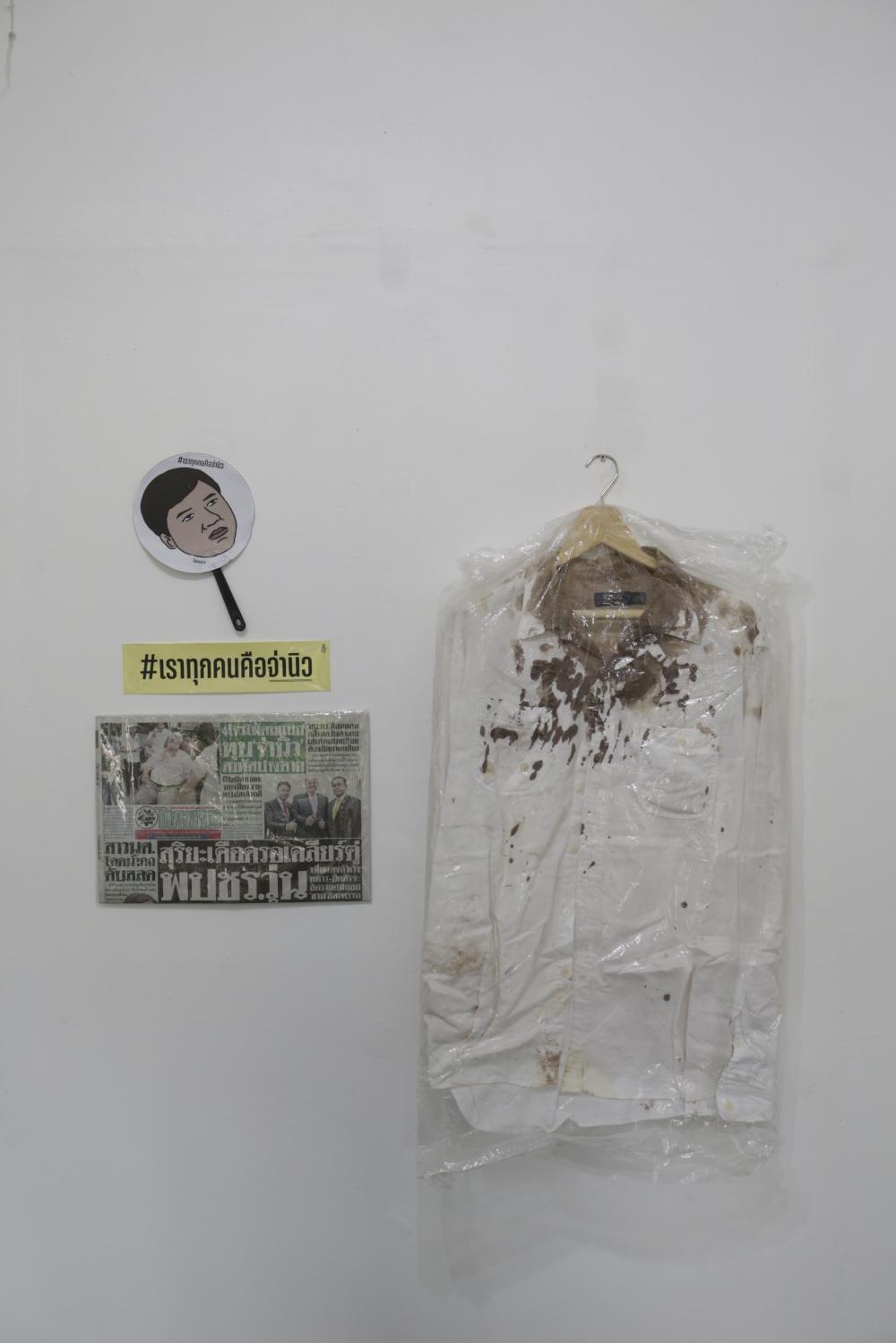 "Now, artists feel more comfortable to create political artwork. For example, the famous writer Uthis Haemamool, who won the SEA Write Award in 2009, designed the limited edition T-shirts featuring a military tank and a taxi. The three-finger salute has been screened on shopping bags and pins to show symbolic gestures against dictatorship. People open their minds, so wearing the Section 112 shirt is what everyone can do."

"After Wanchalerm was abducted in Cambodia, Spring -- a group of Chulalongkorn University students -- created the missing person posters to expand the public reach. They got inspiration from the Mirror Foundation's project. Wanchalerm's mysterious disappearance is the key to the political world for many young protesters. They questioned and began to seek the truth," Anon said.

"Collected: Unwritten History By Museum Of The Commoners" is on view until Nov 25 at Many Cuts Art Space, on Thepkunakorn Road, Muang district, Chachoengsao. Find out more details at facebook.com/manycuts.artspace or facebook.com/commonmuze. 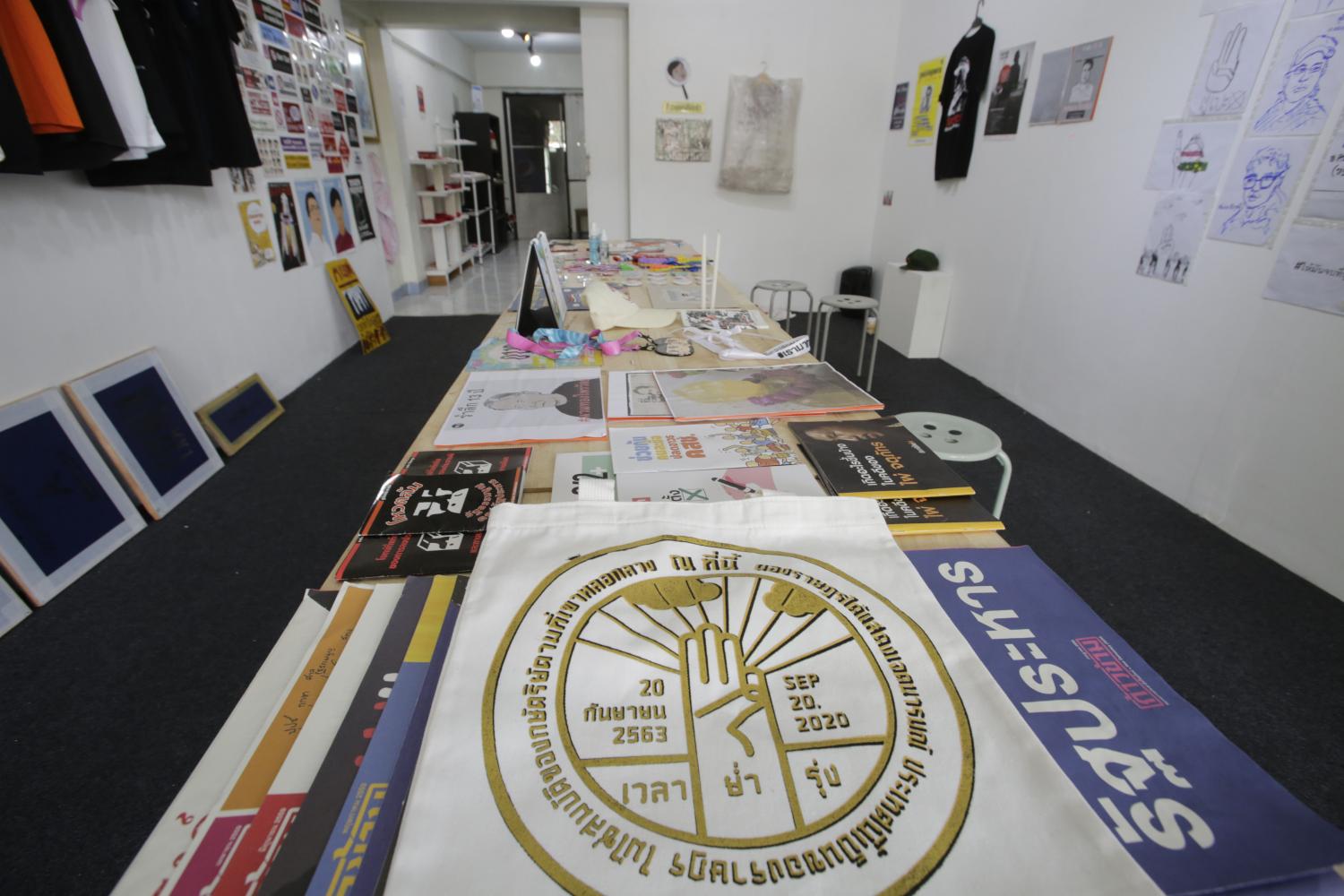 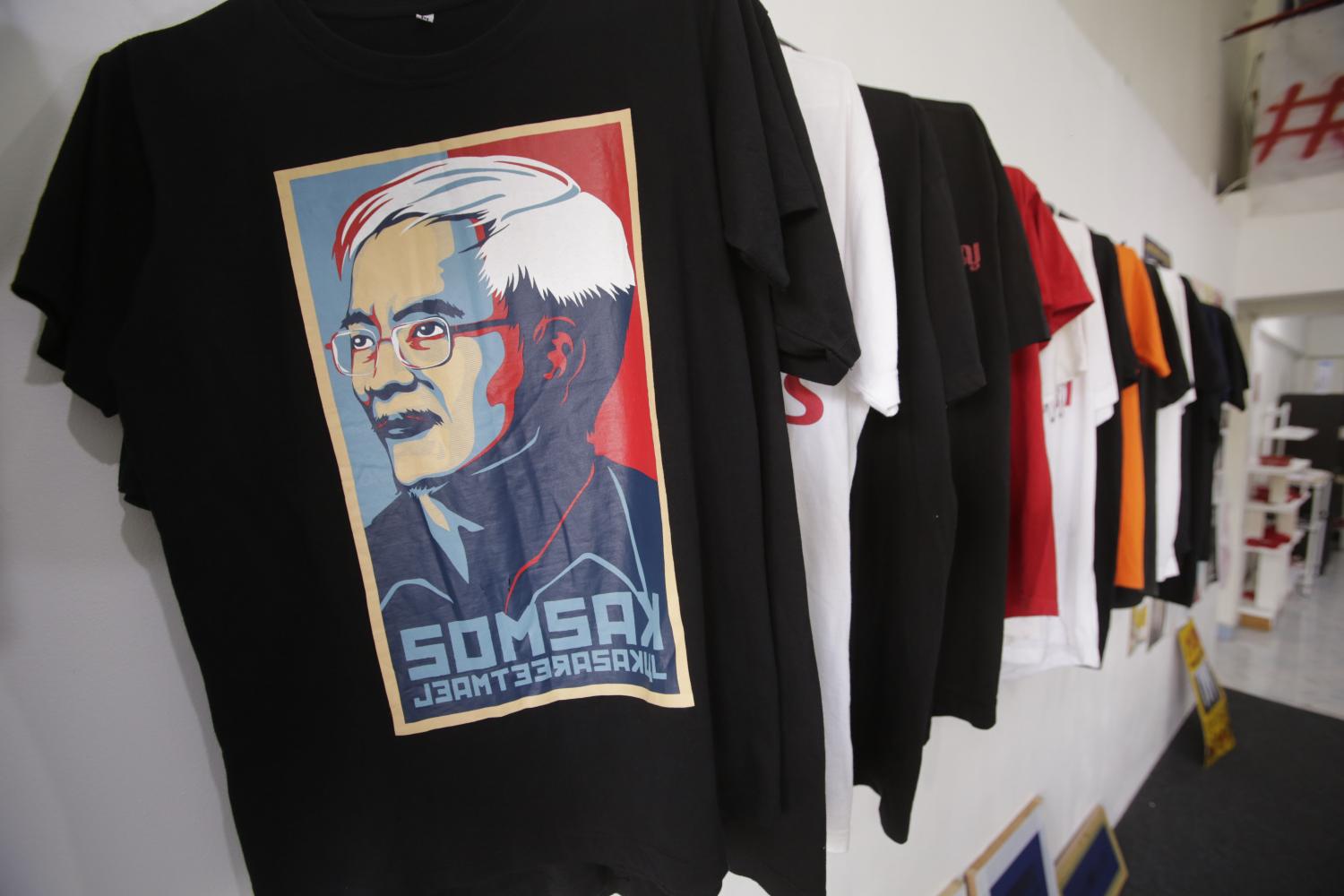 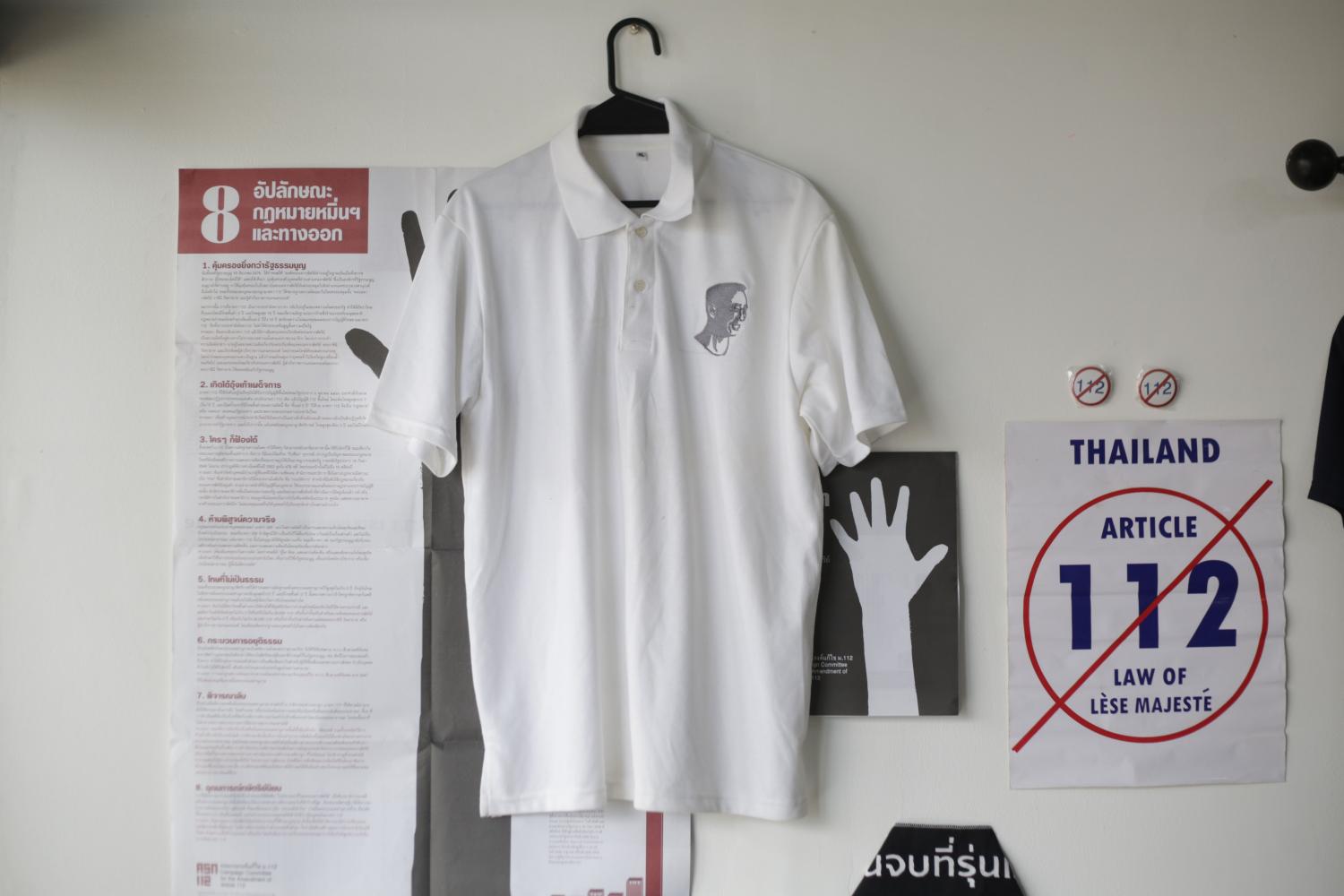 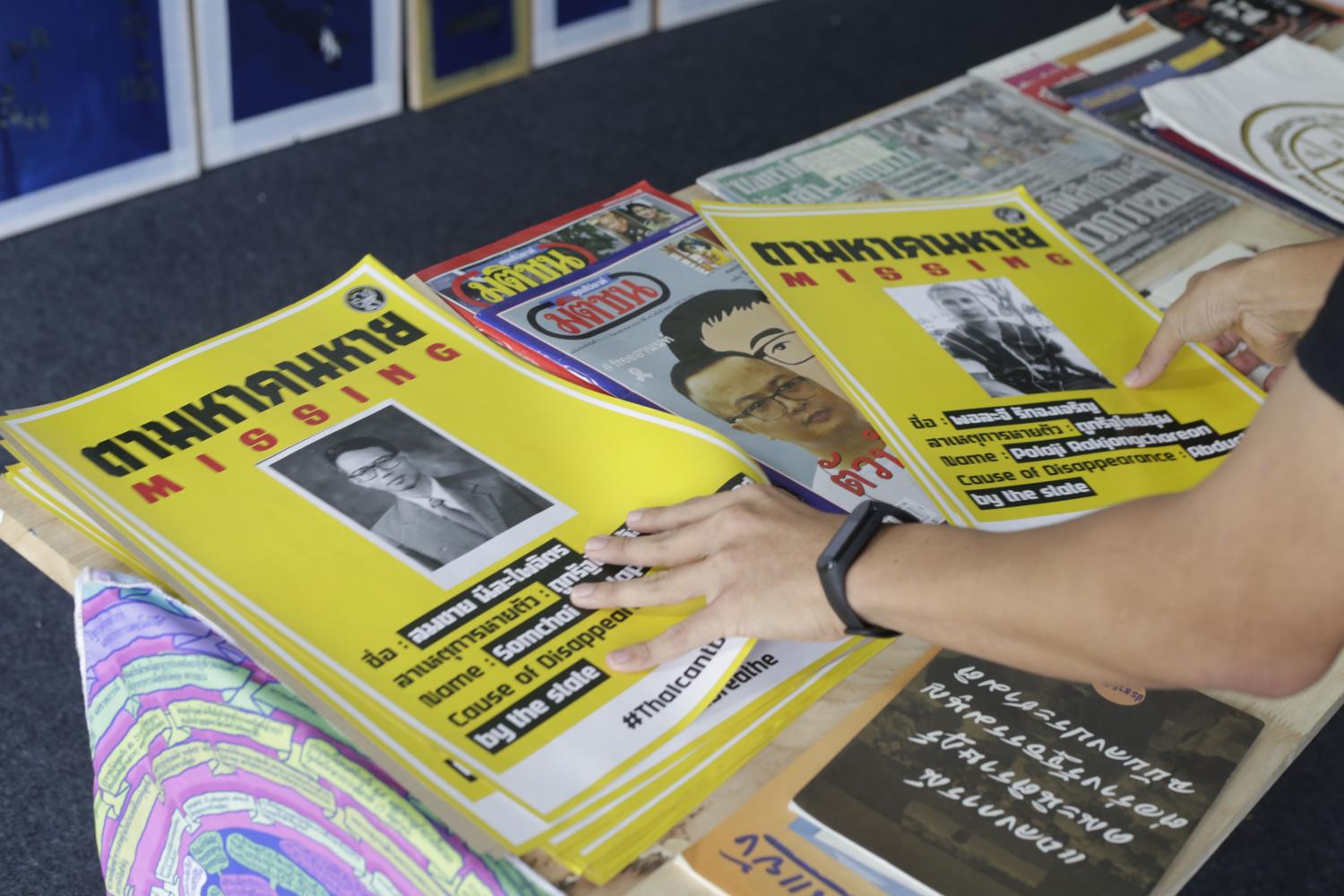 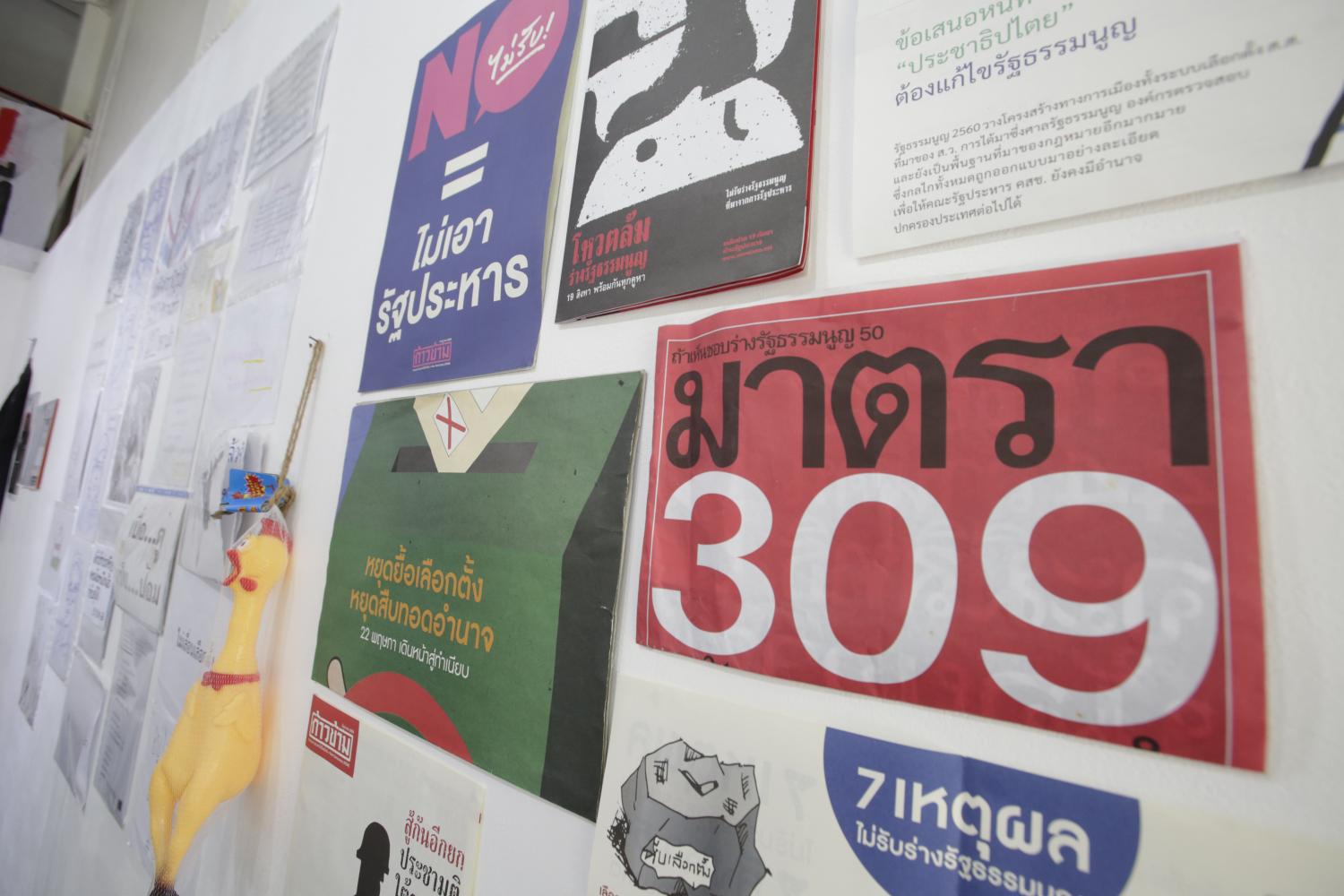 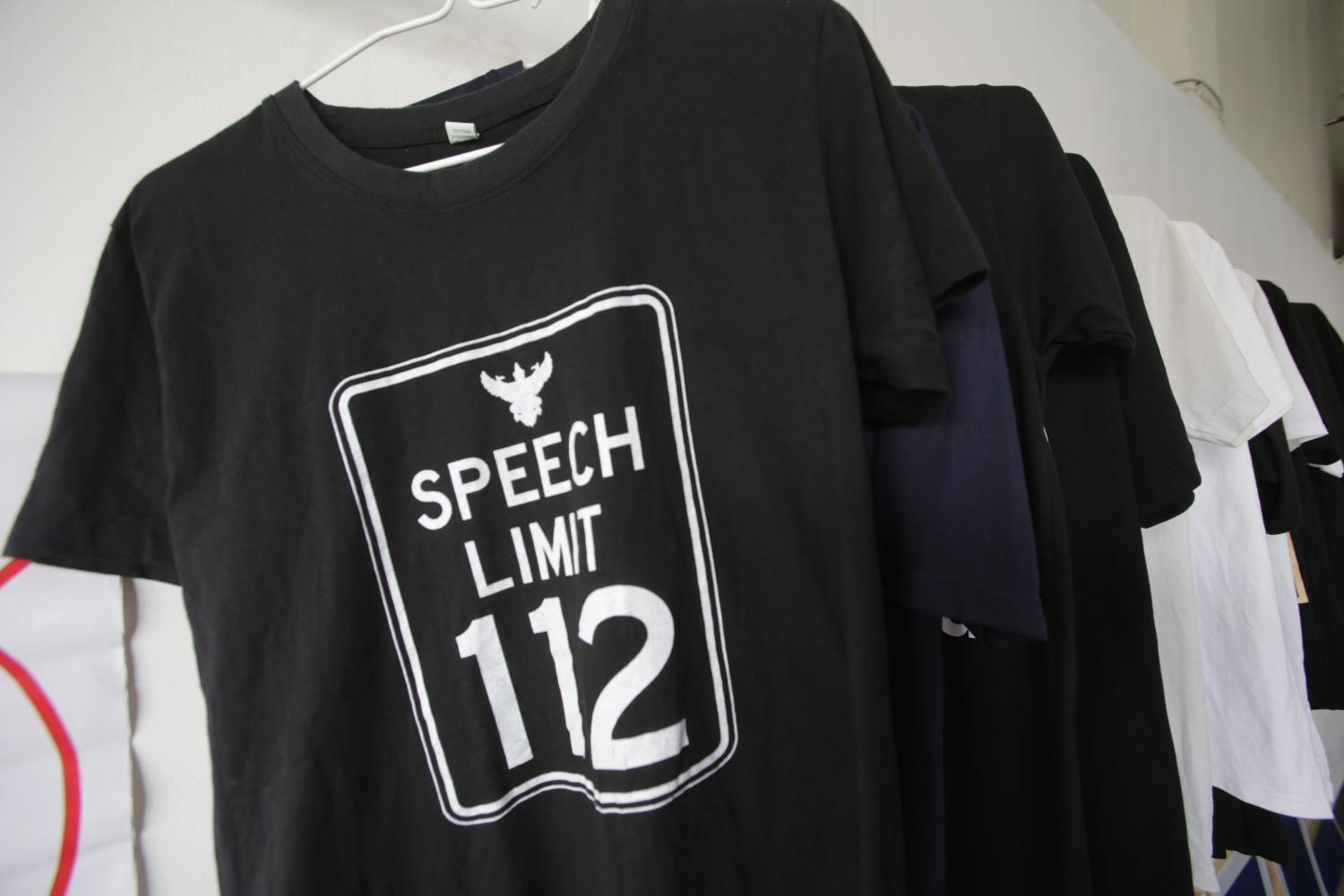