published : 11 Nov 2020 at 04:00
newspaper section: Life
writer: Pattarawadee Saengmanee
Above and below Zodiac (2019), a series of 12 Lego portraits of zodiac animal heads. (Photo by Somchai Poomlard)

Besides an epochal large-scale boat at the Bangkok Art Biennale, people can also take extra delight in admiring Chinese contemporary artist Ai Weiwei's works, which are on display at Tang Contemporary Art until Dec 10.

Titled "Year Of The Rat", this is his first solo exhibition in Thailand and it showcases recognisable Lego portraits, elegant jewellery and astonishing marble sculptures from his previous and latest collections to mark the first zodiac animal in the Chinese lunar calendar and the gengzi year in the sexagenary cycle.

According to a Chinese belief, the year of gengzi always brings misfortune to the Red Dragon. This year, that belief proved to be true as the coronavirus, which has now infected 50 million people around the world, began to spread from Wuhan. Today, humans live in fear and are struggling to survive amid big challenges -- a testament of the gengzi catastrophe. And there have been others.

In 1840, the First Opium War served as a prelude for the transformation of China when it was forced to open its ports and Hong Kong was relinquished to England. In 1900, churches were burned and Christian missionaries massacred as part of the Boxer Rebellion just as Empress Cixi declared war on the United Kingdom, United States, France, Russia, Germany, Japan, Italy and Austria before Beijing was taken in August. 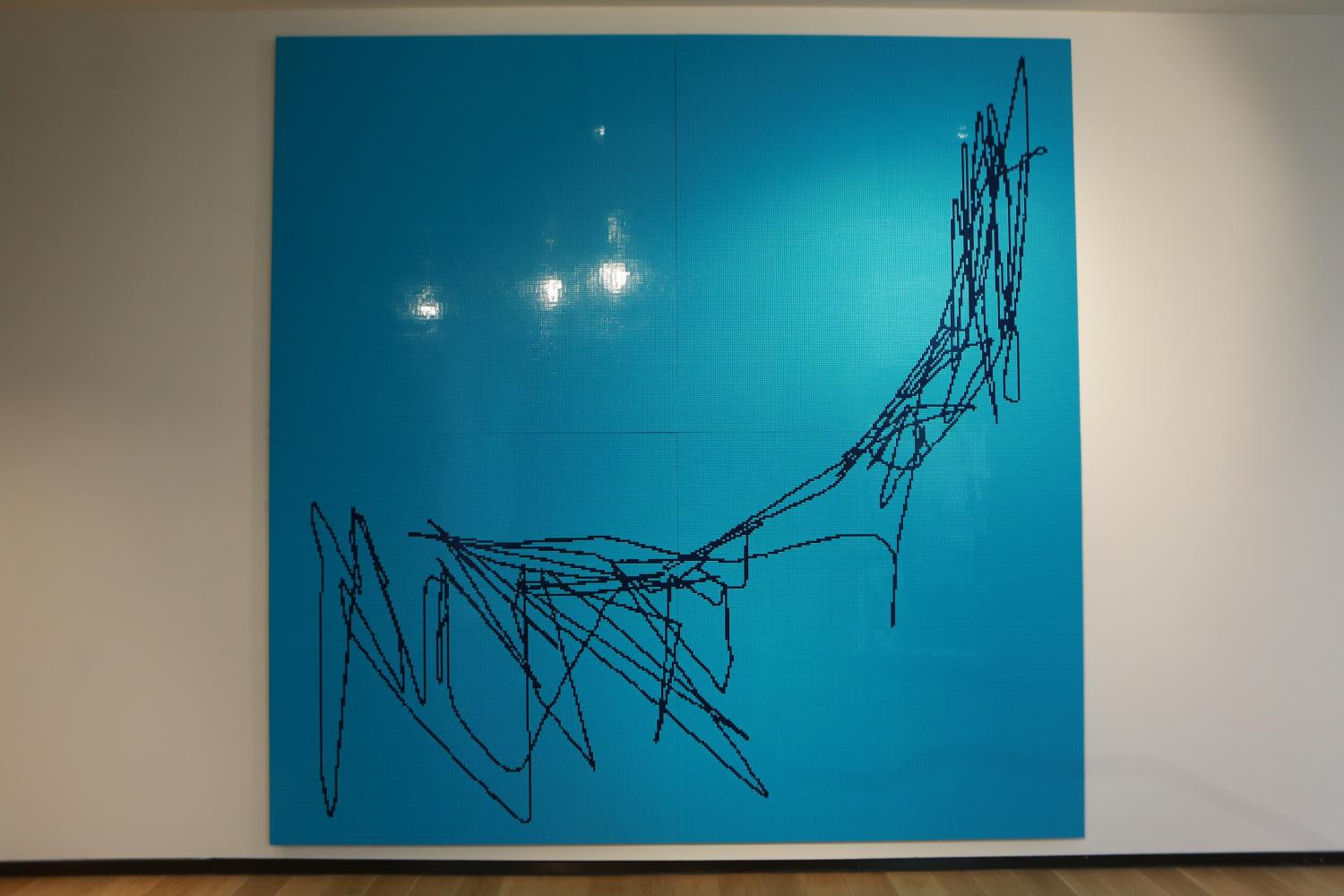 The Navigation Route Of The Sea Watch 3 Migrant Rescue Vessel (2019).

In 1960, China experienced a great famine and it was at this point that Ai and his family reached a turning point. His poet father, Ai Qing, was sent to the Eighth Division of the Xinjiang Production and Construction Corps in Shihezi where Ai lived for 16 years. In terms of the existence of human civilisation, 60 years is not a long time, however, most people will only see one such year of the rat in their lifetime.

Situated on the second floor of River City Bangkok, the walls of Tang Contemporary Art are adorned with Zodiac (2019), a series of 12 striking portraits of zodiac animal heads. Made from Lego bricks, this work is a combination of Ai's Circle Of Animals/Zodiac Heads, a reproduction of 12 bronze animal heads, which were once installed at the Old Summer Palace before they were stolen by French and British soldiers in 1860, and the "Study Of Perspective", a photo collection of several landmarks, institutions and monuments.

Ai cuts through history with new temporal methods by connecting different stories and events. These 12 animal heads symbolise the 180 years of history between the East and West, provocation and adaptation, advancement and backwardness as well as glory and humiliation. 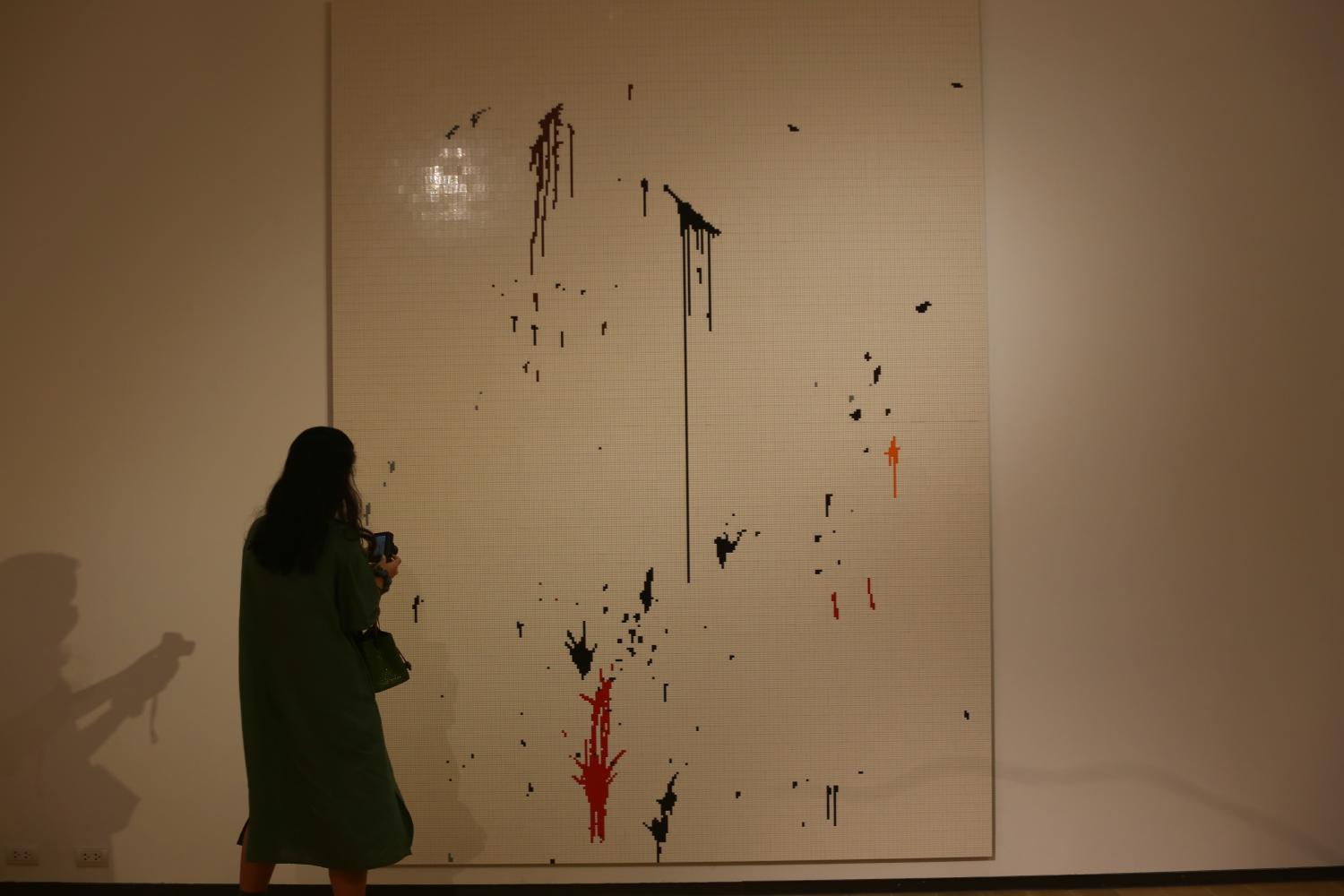 "Consisting of many layers, my work describes Chinese traditions and people in terms of different times and different kinds of characters or even fate. So, it's always interesting to look at how we try to capture something impossible into a more understandable way. My work relates to humanity because I define everybody," Ai said during a virtual press conference.

Ai has used Lego bricks as a medium for his art since 2014 when he created groundbreaking artworks like Trace, Letgo Room and Dropping A Han Dynasty Urn. All of the colourful plastic bricks used were donated by museums who collected them from art lovers after Lego refused to sell a large number of bricks to the artist.

"The Lego bricks are also a medium and it's fun to use new media. It's like I have learned a new language and vocabulary. The idea came from a thought I had about why many artists did not use Lego bricks like my son. Only the kids used them. Yet, they have beautiful and clear colours and after you make a design, everybody can make another one just like it. It's a very interesting quality that only Lego has," Ai added. 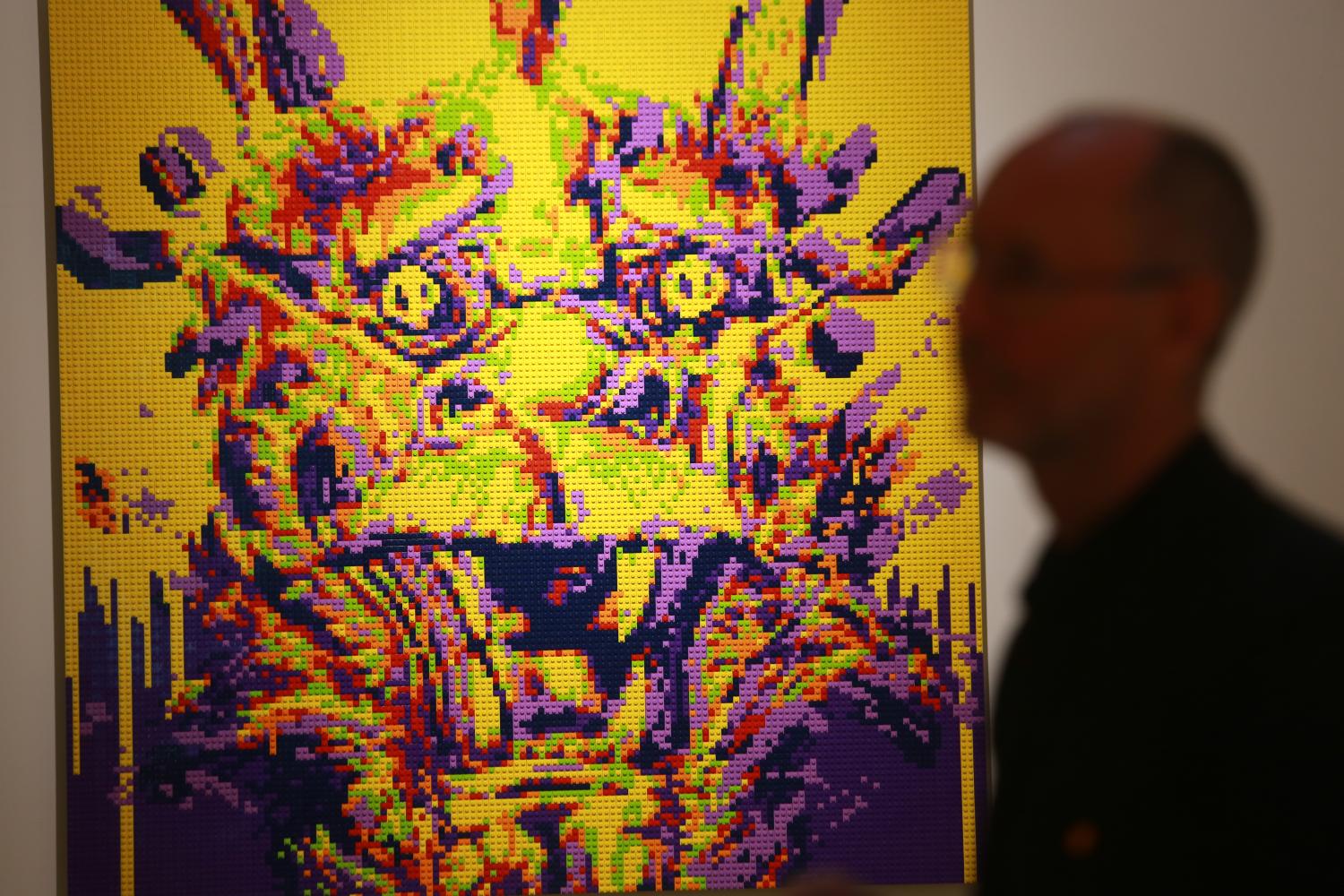 Other works from his 2019 Lego series include an abstract painting titled The Defacing Marks Of Colored Pigment Thrown Onto Mao Zedong's Portrait (2019), which takes visitors back to May 1989 when a pro-democracy protest was staged at Tiananmen Square. With colours spattering onto a white backdrop, Ai captured the story of three student protesters -- Yu Dongyue, Lu Decheng and Zu Zhijain from Hunan -- who threw ink-filled eggshells at Mao's portrait, whose allies suspected them of being agent provocateurs. In the end, they were sent to the police and sentenced to lengthy prison terms.

"Ai removed Mao's image and created some colour splash on the background to create the abstract painting. The idea was to recount history from different perspectives because we really can't know what happened when we read a history book. So, Lego bricks are like jigsaw puzzles that can help complete the picture. The Defacing Marks reflects Ai's political view," said Yang Yang, manager of Tang Contemporary Art.

Also choosing to focus on human migration, The Navigation Route Of The Sea Watch 3 Migrant Rescue Vessel was inspired by the German rescue ship which saved 53 Libyan migrants and transported them to Italy after they had been floating at sea for 16 days. This abstract painting was made to resemble a map in which visitors can trace their journey to find a new and safe home. 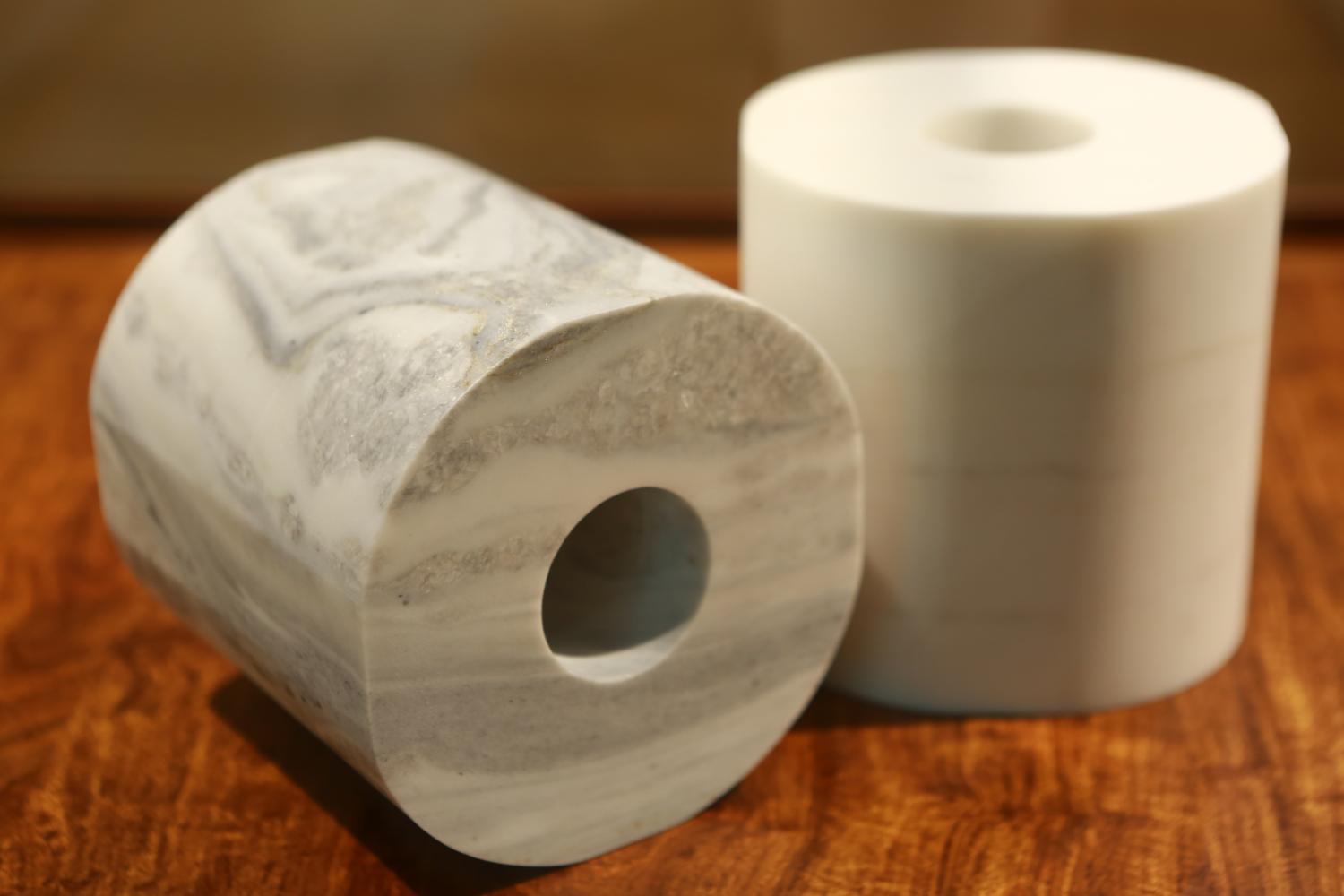 Also on view are a pair of gold engraved rings titled Ring W and Ring M (2018), which depict migrants travelling by foot or sea and those living alone or in a group. Influenced by ancient Egyptian hieroglyphics and the ancient Greek gold process, these rings are an interpretation of his research on human migration patterns while the documentary Human Flow (2017) represents the duality of human nature.

Meanwhile, a series of white marble sculptures have also been a highlight. The Marble Takeout Container (2015) symbolises modern life, while the two rolls of Marble Toilet Paper (2020) reflect how our lives have changed due to the Covid-19 pandemic, which at one point made toilet paper become a valuable item. Developing a documentary project to capture what's happening around him, Ai created Revolt (2019) and the umbrella-like Shelter (2014), a homage to pro-democracy protesters that used them for safety during the mass demonstrations in Hong Kong in 2014. There's also Marble Helmet (2015), a replica of the hard hats worn by workers who tried to save victims after the 2008 Wenchuan earthquake.

"In earlier times -- back in the Roman era -- marble was used to build monuments because people wanted to create something that was permanent. Yet, these works are ironic. It's interesting that there are certain things we feel the need to remember about our time. I tried to find some words to relate to modern life and the current situation. In the end, the human condition is permanent rather than temporary," Ai added.

"The Year Of The Rat" is on view until Dec 10 at Tang Contemporary Art on the 2nd floor of River City Bangkok. Admission is free. Find out more details at tangcontemporaryart.com. 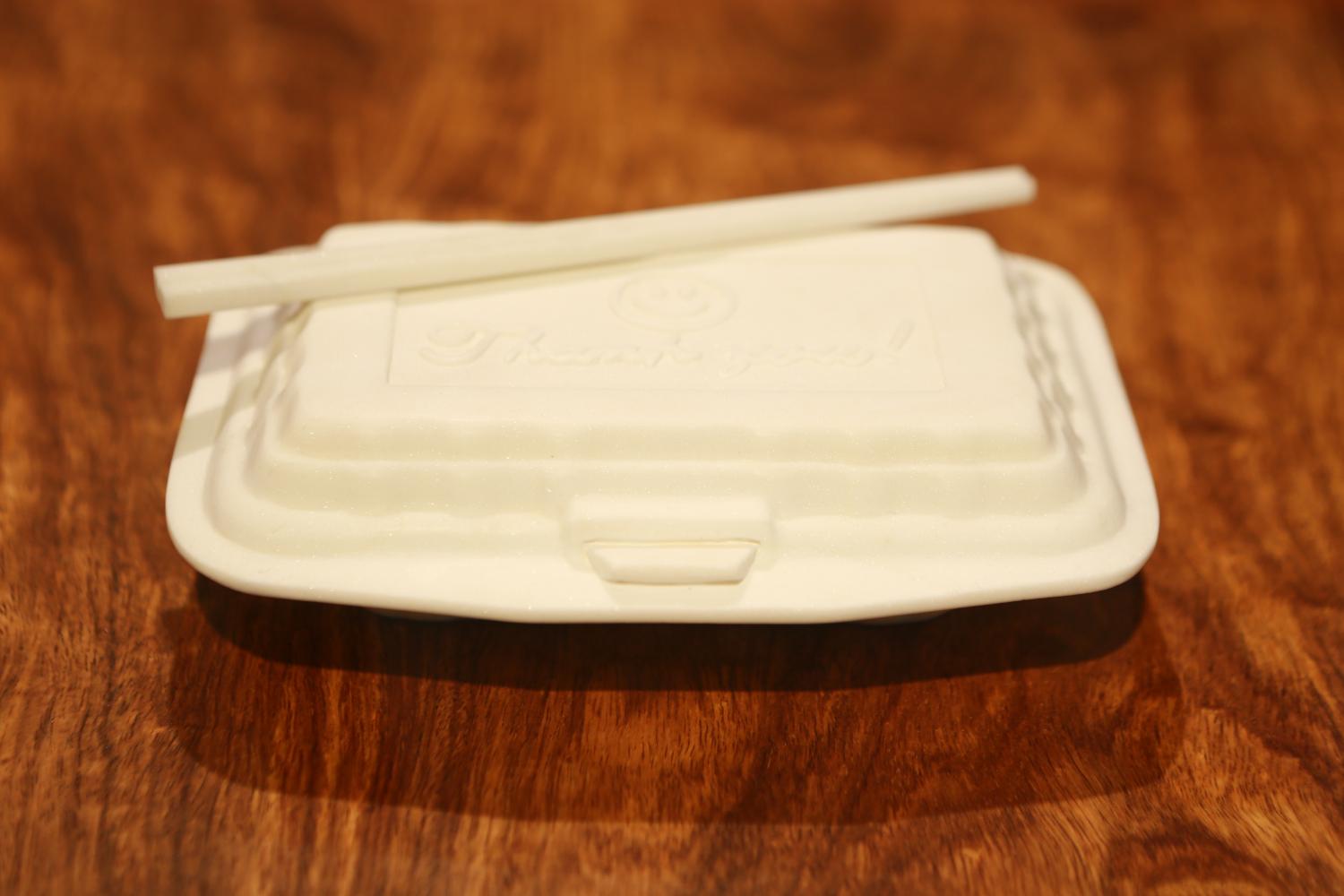