Like many others, I am not in the mood to travel during the partial lockdown but that will not stop me from exploring. From my computer screen, I can explore various sites in Bangkok and also other parts of the country. This will at least give me an idea of places to add to my itinerary in the future.

Below are five recommended places you may want to virtually check out.

FIT FOR A QUEEN

Located inside the compound of the Grand Palace in the Ratsadakorn-bhibhathana Building, the Queen Sirikit Museum of Textiles has been open for more than nine years to preserve and promote the national culture of textiles through the Support Foundation, initiated by HM Queen Sirikit the Queen Mother. 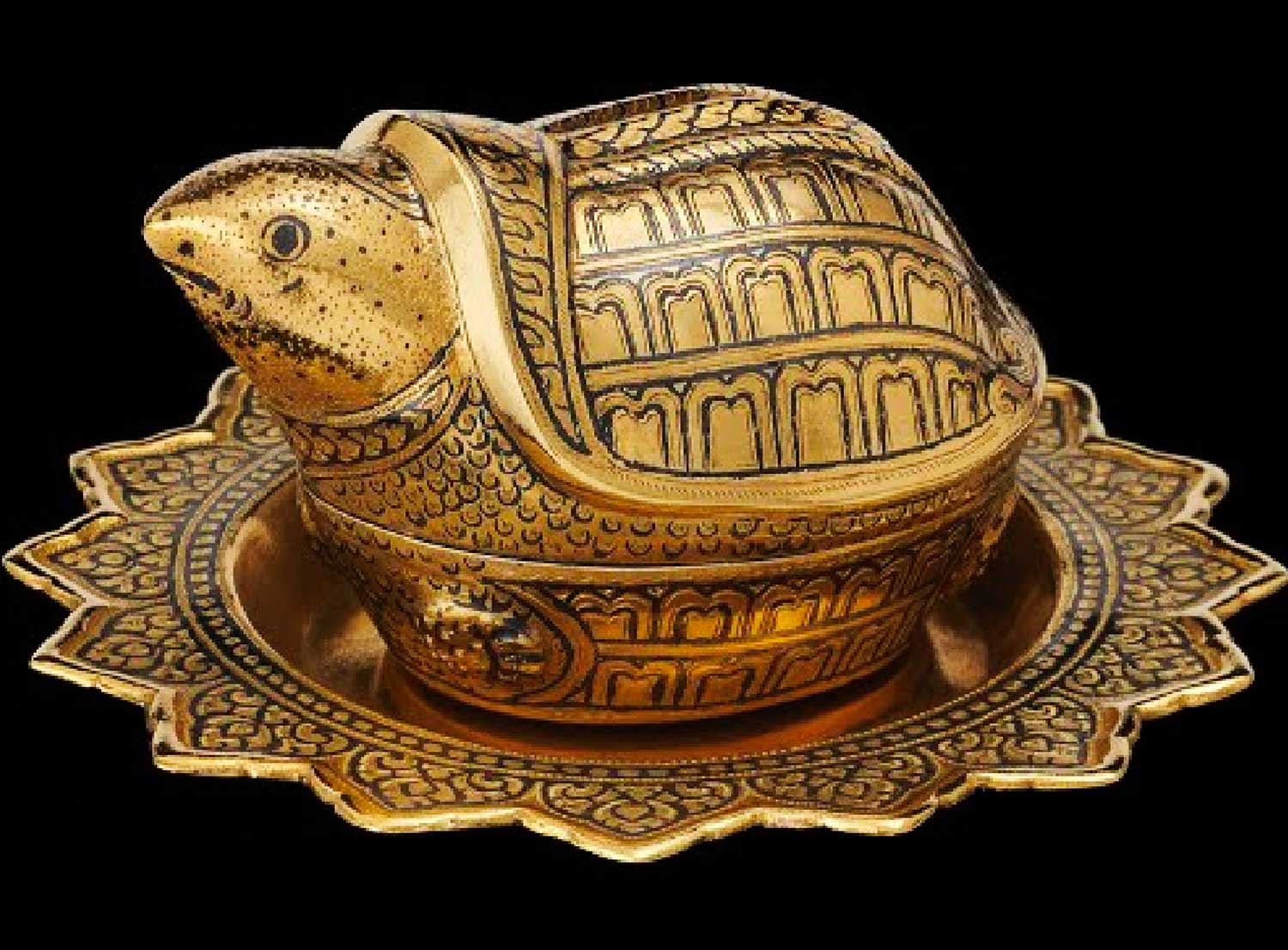 A royal gift to the first grandson of US President Lyndon B. Johnson in 1967. (Photos © Queen Sirikit Museum of Textiles) 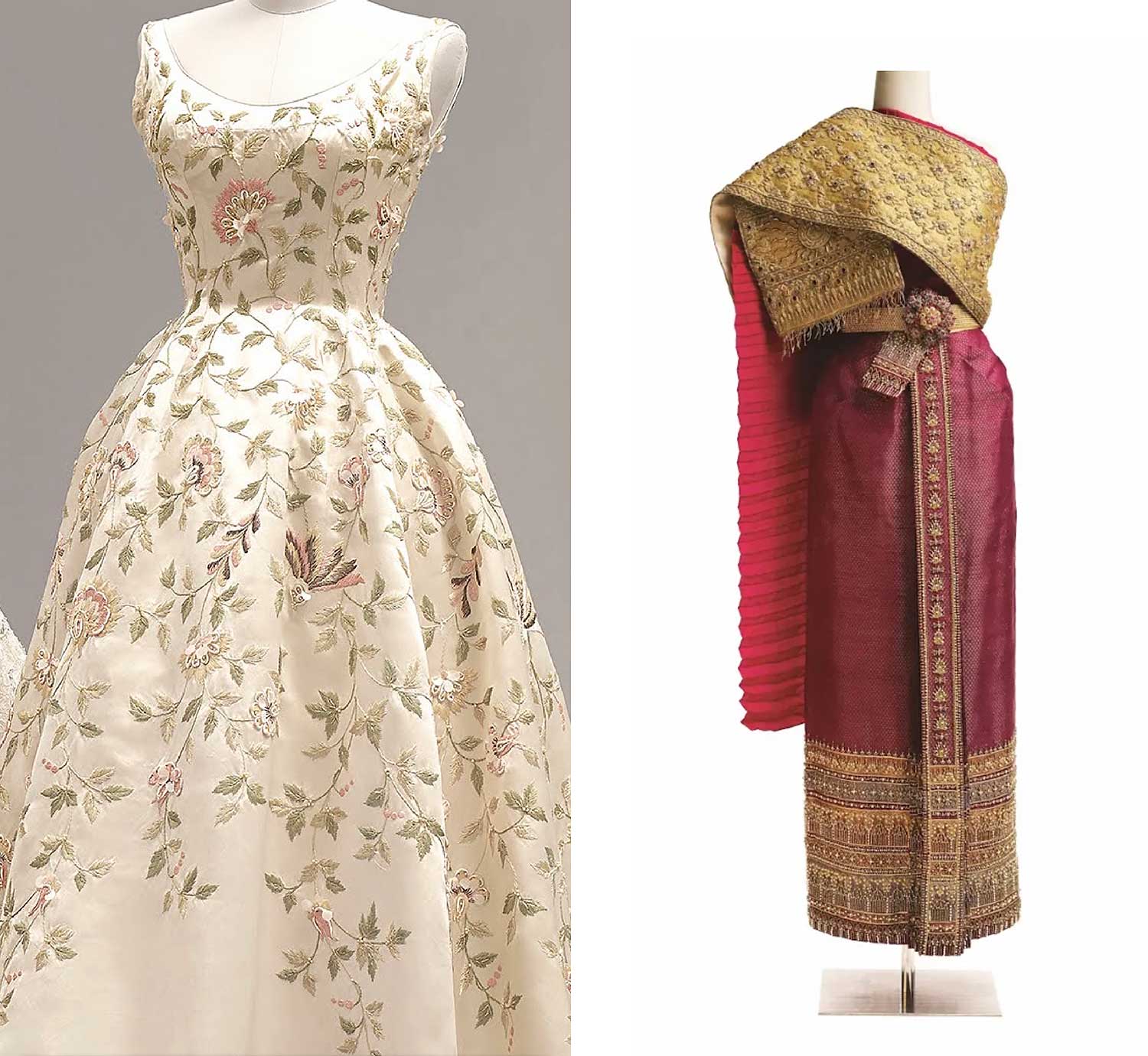 An evening dress of the Queen designed by Pierre Balmain, a renowned French designer (1914-1982).

Visitors can choose to view items by collection.

Although the museum has been closed since the middle of April, we can access its exhibition via Google Arts & Culture, an online platform allowing users to virtually visit museums and art galleries worldwide.

About 13 organisations have partnered with Google for the service, including the Thai Film Archive, Thai Flag Museum, Bangkok Art and Culture Centre and Museum of Contemporary Art (Moca Bangkok).

On the website artsandculture.google.com/partner/queen-sirikit-museum-of-textiles you can browse items, read stories about some artefacts or click on the virtual museum tour feature. You can select galleries you want to visit such as the evening gowns of Queen Sirikit, khon costume and the Batik collection. The website has a zoom-in function allowing you to see details of masterpieces up close.

For more information, visit its fan page at facebook.com/qsmtthailand or add the museum's Line ID: @qsmtshop if you would like to support local handicrafts or purchase silk clothes and products of the Support Foundation.

THE 118-YEAR-OLD MANSION IN PHUKET

Located on a 4 rai site on Krabi Road in the old town of Phuket, Chinpracha House is open as a museum for visitors to catch a glimpse of the good old times in Phuket over a century ago.

The property is a Sino-Portuguese mansion. It was built in 1903 by Phra Phitak Chinpracha, son of a wealthy Chinese businessman Luang Bamrung Chin Prathet. Phra Phitak Chinpracha was born in Phuket and studied in Penang, so he built his home in colonial style similar to Western-influenced buildings in Malaysia's northwestern state. 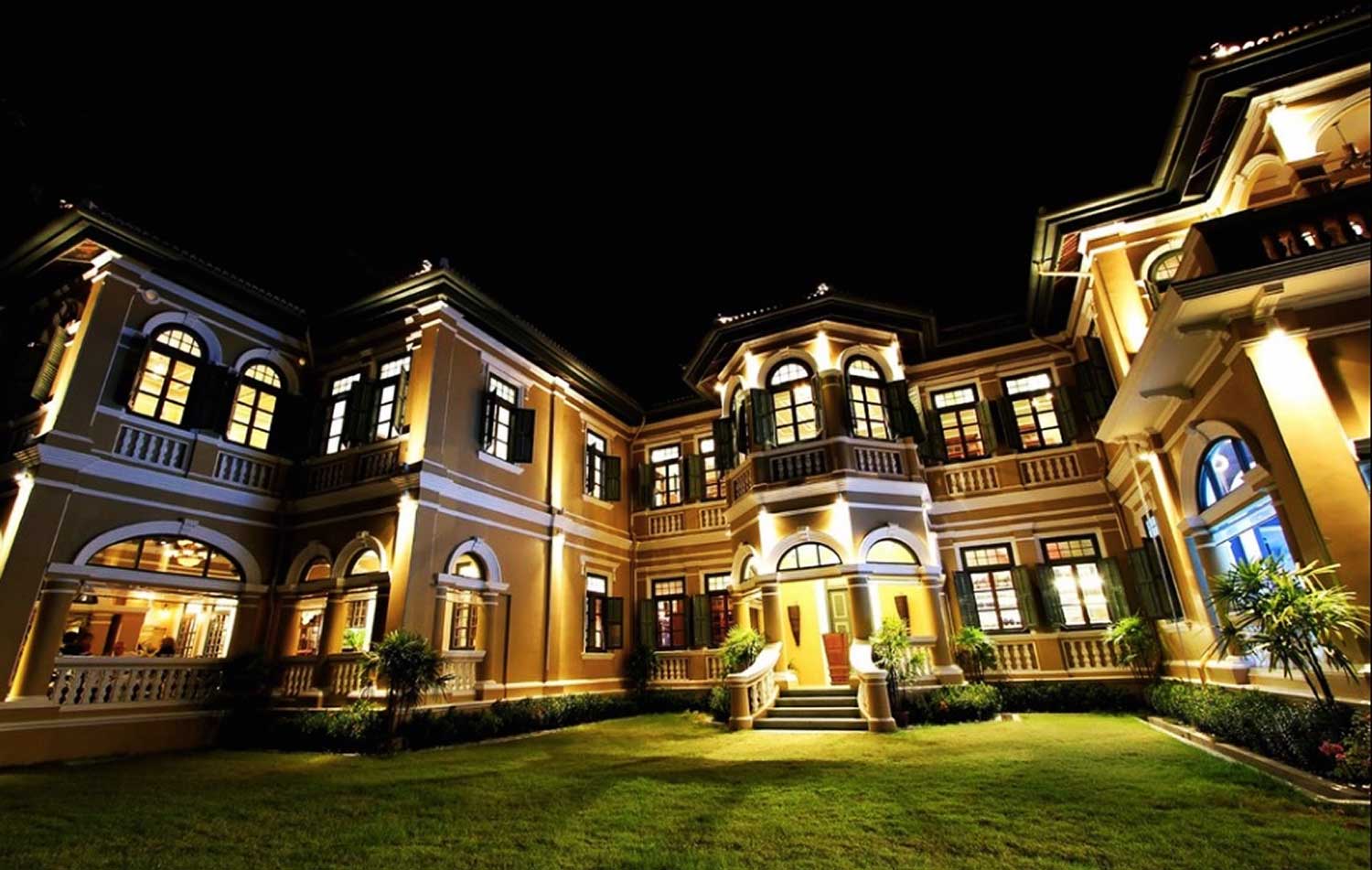 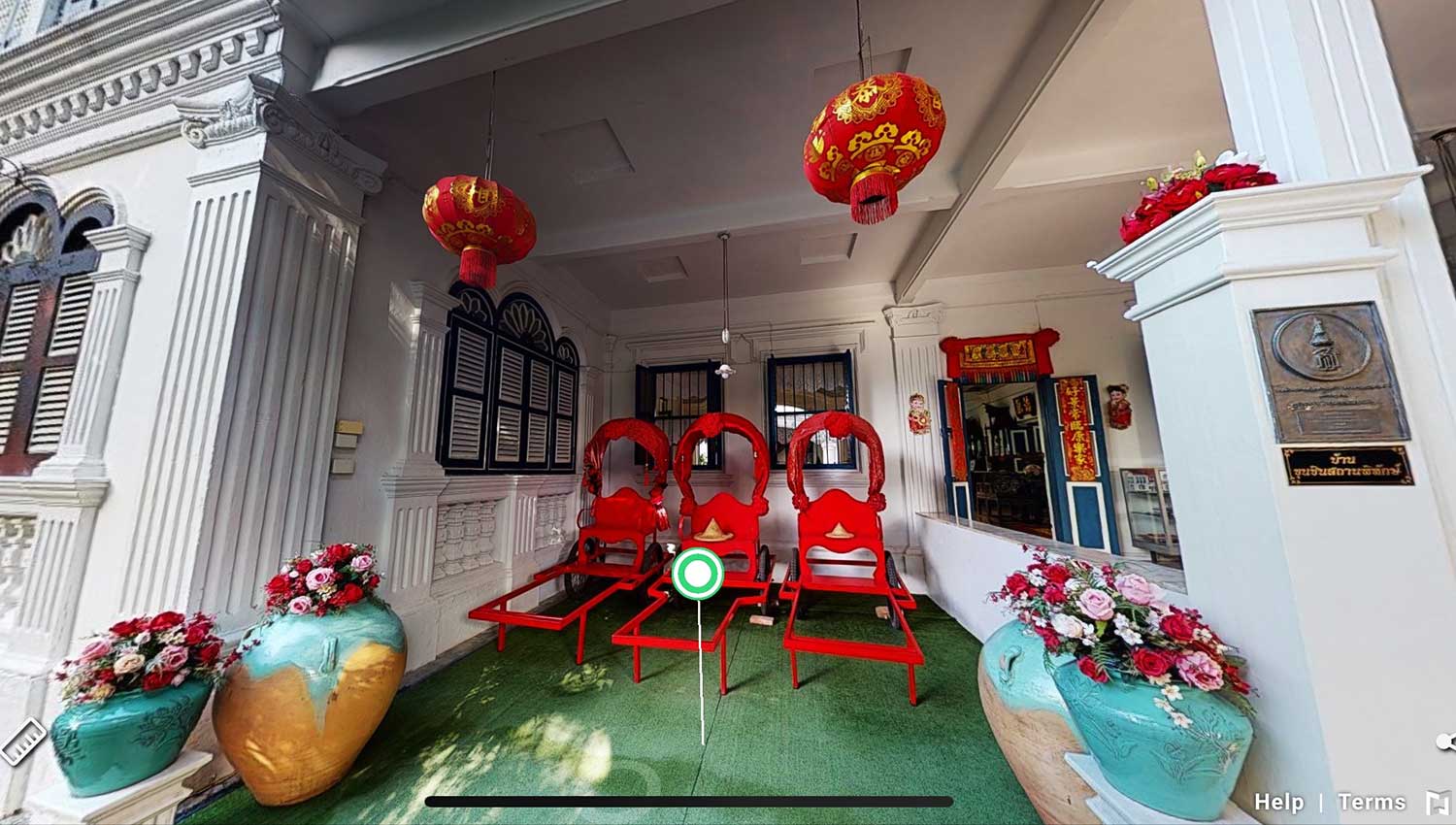 Red rickshaws are displayed at the front of the home. In the past, they were used to carry a bride and groom to their wedding ceremonies.

A red curtain decorates the door to the brideand-groom’s bedroom.

The middle section of this big home is open for ventilation and natural light.

Besides being successful in the tin mining business, Phra Phitak Chinpracha was also a civil servant, a member of the Wild Tiger Corps -- paramilitary troopers -- established by King Rama VI, and an advisor to the Phuket governor. He also supported local education by helping the expansion of Satree Phuket School. In 1916, King Rama VI gave him the Tandavanitj family name.

It was said that when Phra Phitak Chinpracha built his home, he was only in his early 20s. Most of the construction materials and decorations were imported such as furniture from China, fences from the Netherlands and tiles from Italy. He later gave the home to his oldest son as a wedding gift and moved to another nearby house called Ban Phitak Chinpracha, which is known as the Blue Elephant restaurant these days.

Meanwhile, Ban Chinpracha is still the home to the fourth generation of the Tandavanitj family.

"My husband Pracha was the grandson of Phra Phitak Chinpracha. He wanted to open our house as a learning centre for kids," said Jaroonrat, better known as Auntie Daeng.

The family lives on the 2nd floor and has opened the ground floor as a museum.

The idea to open the house as a learning centre struck in 1985 when Phuket governor Manit Wanyapetch wanted to organise a celebration on March 13 to celebrate war heroines Thao Thep Krasattriand and Thao Si Sunthon. The two sisters helped defeat the Burmese army and drove them from Phuket in the famous Battle of Thalang in 1785.

The governor asked for co-operation from various parties to host a celebration. He also asked Preecha Tandavanitj to open his Sino-Portuguese house to visitors and so it was opened for a month to welcome guests, especially students. Later, Preecha became a guest teacher at Phuket's Rajabhat University. One of his graduate students asked his permission to bring in visitors to the century-old home. Since then, visitors kept ringing the doorbell for a tour and Preecha eventually decided to officially open his house as a museum over two decades ago.

I visited the house virtually via my.matterport.com/show/?m=MzEDJ274fNG. I found three red rickshaws at the front door. When I clicked on a round green icon, it displayed information in both Thai and English. The items are called Lhang Chia (in Hokkien) which were used to transport a bride and groom in their traditional wedding ceremony.

Next, I entered the building and before me was a large living room. I zoomed in to see details of lacquered furniture with pearl inlays, pictures of the family, tiles and decorations. Some items also have a red icon that will pop up brief information if clicked.

The ground floor also has a bride and groom bedroom, a dining area, a kitchen with items such as charcoal irons, century-old chamber pots and tools used for tin mining.

The private museum is open daily from 9am to 4pm. Visit its fan page at facebook.com/ChinPrachaHouseMuseum or call 076-211-281 for more details.

If you visit the museum, you may have a chance to rent a Peranakan costume for a photo shoot. The museum can also arrange workshops and a tea set served with local snacks.

THE HERITAGE OF AYUTTHAYA

Chao Sam Phraya National Museum in Ayutthaya is one of the places I like to visit when I go to a historical park.

Opened in 1961, the museum is named after King Borommaracha II, who was known as Chao Sam Phraya while he was a prince. The seventh king of Ayutthaya commissioned the construction of Ratchaburana Temple where he cremated his two elder brothers who battled against one another for the throne. He also made two stupas built to keep their ashes and offered them valuable items. 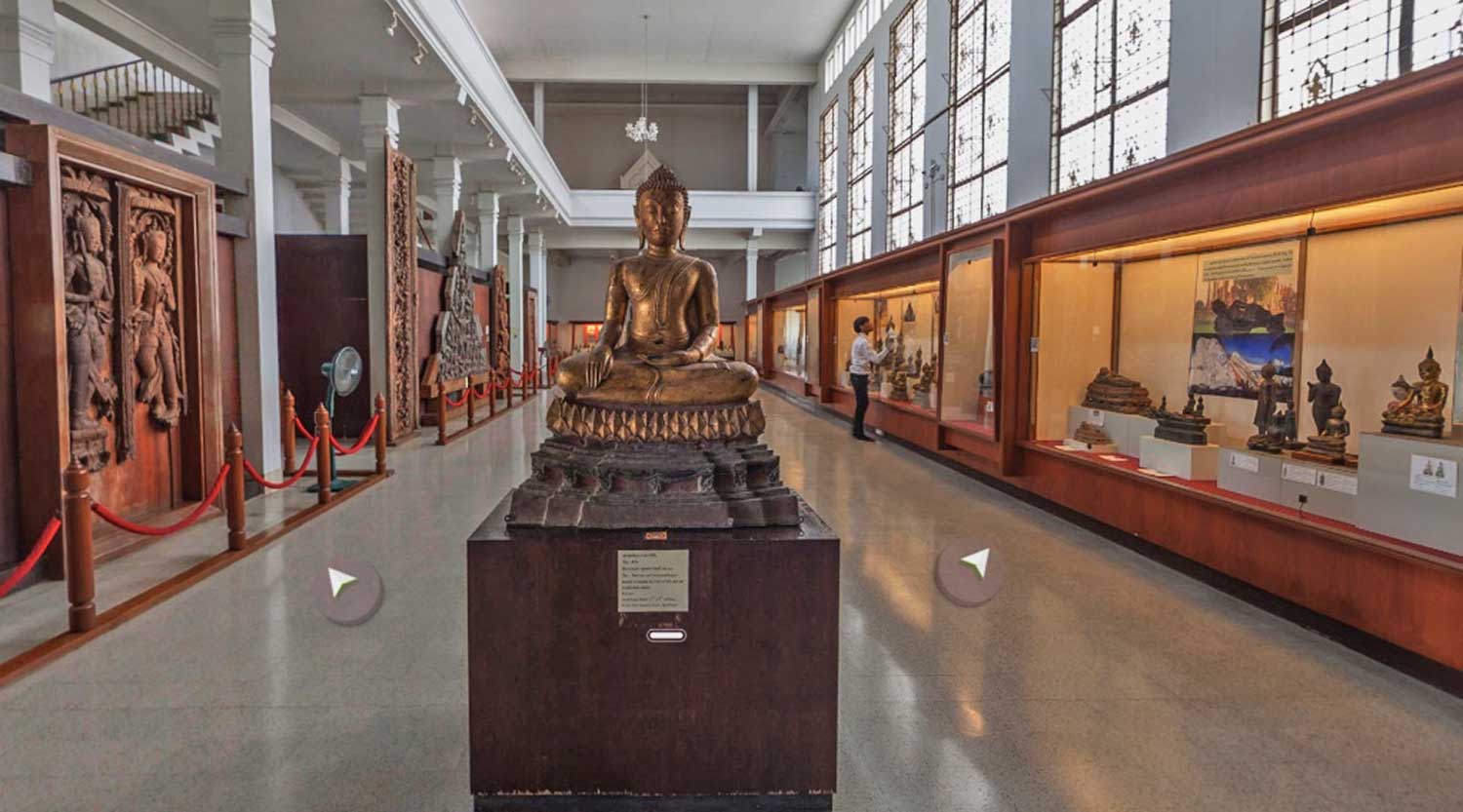 The main hall of the exhibition. 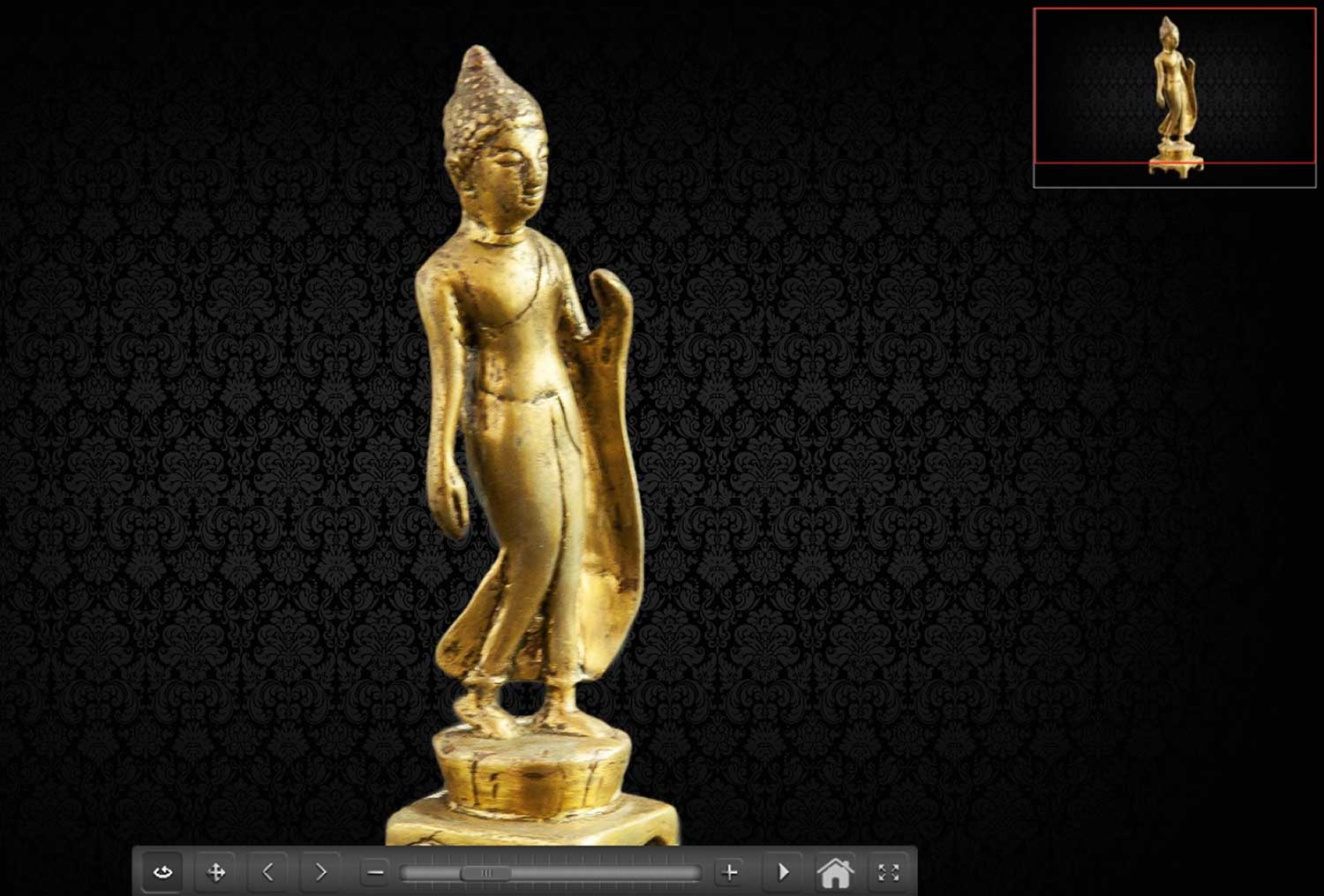 The 3D function enables you to gradually rotate the artefact. 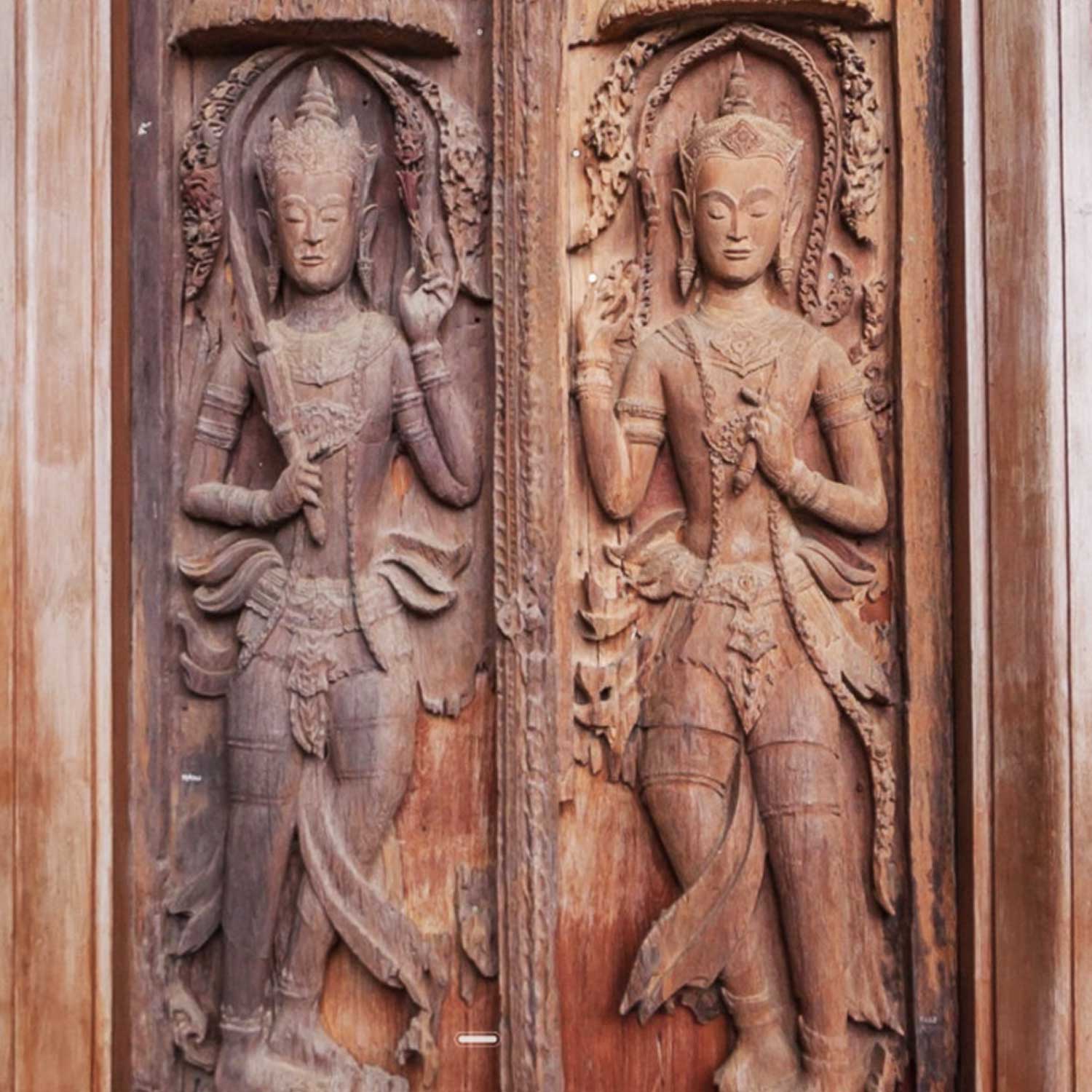 You may observe each artefact in the museum as if you were there except that you can not zoom in to read the description. The programme also offers pop-up description boxes for some items. (Photos © The Fine Arts Depa rtment)

Around the year 1957, the Fine Arts Department (FAD) found that the pagodas were damaged and some valuable items were stolen. At that time, Their Majesties King Bhumibol Adulyadej and Queen Sirikit visited the historical site and King Rama IX recommended the Fine Arts Department to build a museum to preserve and exhibit the artefacts. Hence, the archaeological team at FAD excavated the site and found countless valuable items inside the pagodas such as Buddha amulets and images, precious stones and artefacts made of gold.

Today the two-storey museum displays about 2,400 items. The highlights can be viewed through its virtual museum site at virtualmuseum.finearts.go.th/chaosamphraya/index.php/en/.

The site features a "Virtual Model" to highlight some notable artefacts that you can zoom in on and rotate 360 degrees. Meanwhile, the "Virtual Museum" function presents an overview of the museum in the Thai language. For those who do not understand Thai, you can turn off the volume and select an exhibition room you want to see by clicking on one of the images on the left of your screen. An alternative is to click on the floor plan icon in the right corner.

The museum has many Buddha images that date back to the Dvaravati period or from the 6th-11th centuries. Also on display are crafted wooden doors, gold ornaments.

The museum is open daily except for Monday from 9am to 4pm. Visit finearts.go.th/chawsampraya or facebook.com/chaosamphraya or call 035-241-587 for more details.

MANGROVE FOREST OF THE EAST 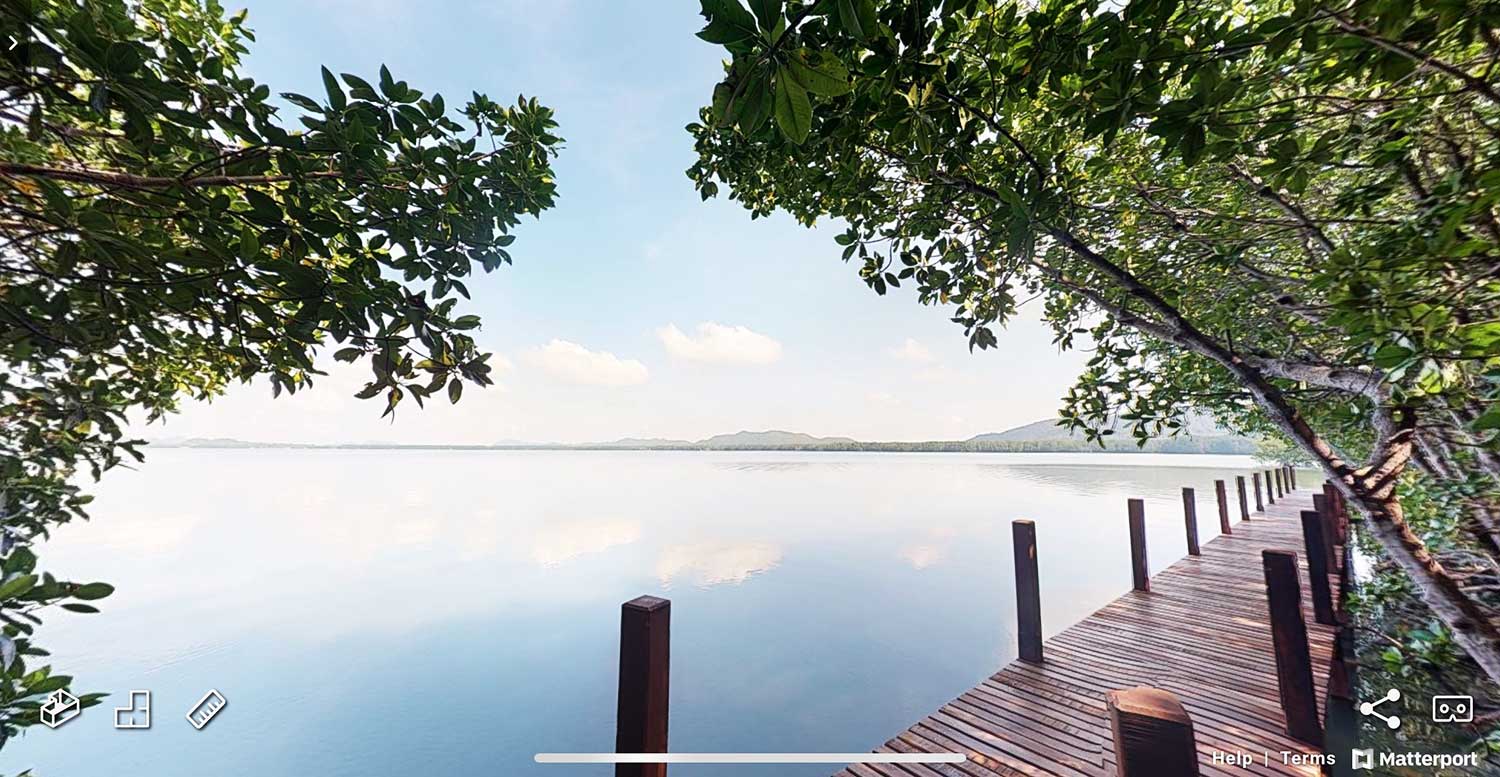 You can stroll along the wooden walkway virtually. 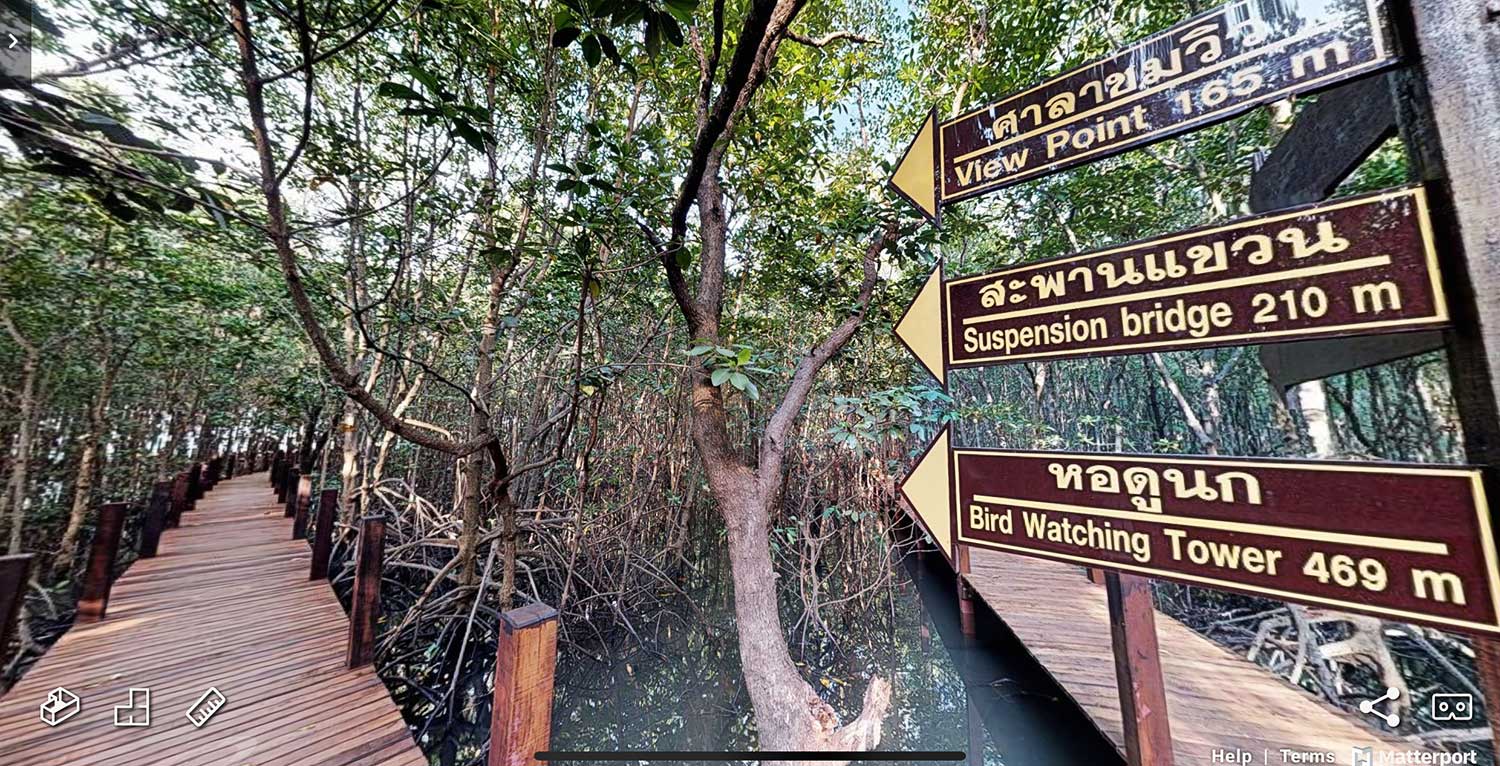 You can use the icons at the bottom left to see an overview of the trail. (Photos © Kung Kraben Bay Royal Development Study Centre)

Through the Kung Kraben virtual tour sponsored by the Tourism Authority of Thailand, you will be able to stroll along a 1.6km-long wooden boardwalk that was built in the mangrove forest as a trial for visitors.

While browsing the virtual tour (my.matterport.com/show/?m=YcBUfyy5oFS), the picture of the mangrove trees and their long roots over the body of water reminded me of the pop sound I always heard while walking inside. I also tried to zoom in to find muddy areas, hoping to see either fiddler crabs or mudskippers but I found none. The virtual tour has its limitations but at least it is always good to see the green forest.

Located on Kamphaeng Phet 6 Road running in parallel to Vibhavadi Rangsit Road, the Museum of Contemporary Art (Moca Bangkok) is the brainchild of telecommunications tycoon Boonchai Bencharongkul who founded the museum almost a decade ago to exhibit his collections, worth a billion baht or more.

He wanted Moca to be an introduction to Thai contemporary art and to support learning and knowledge of Thai artists. 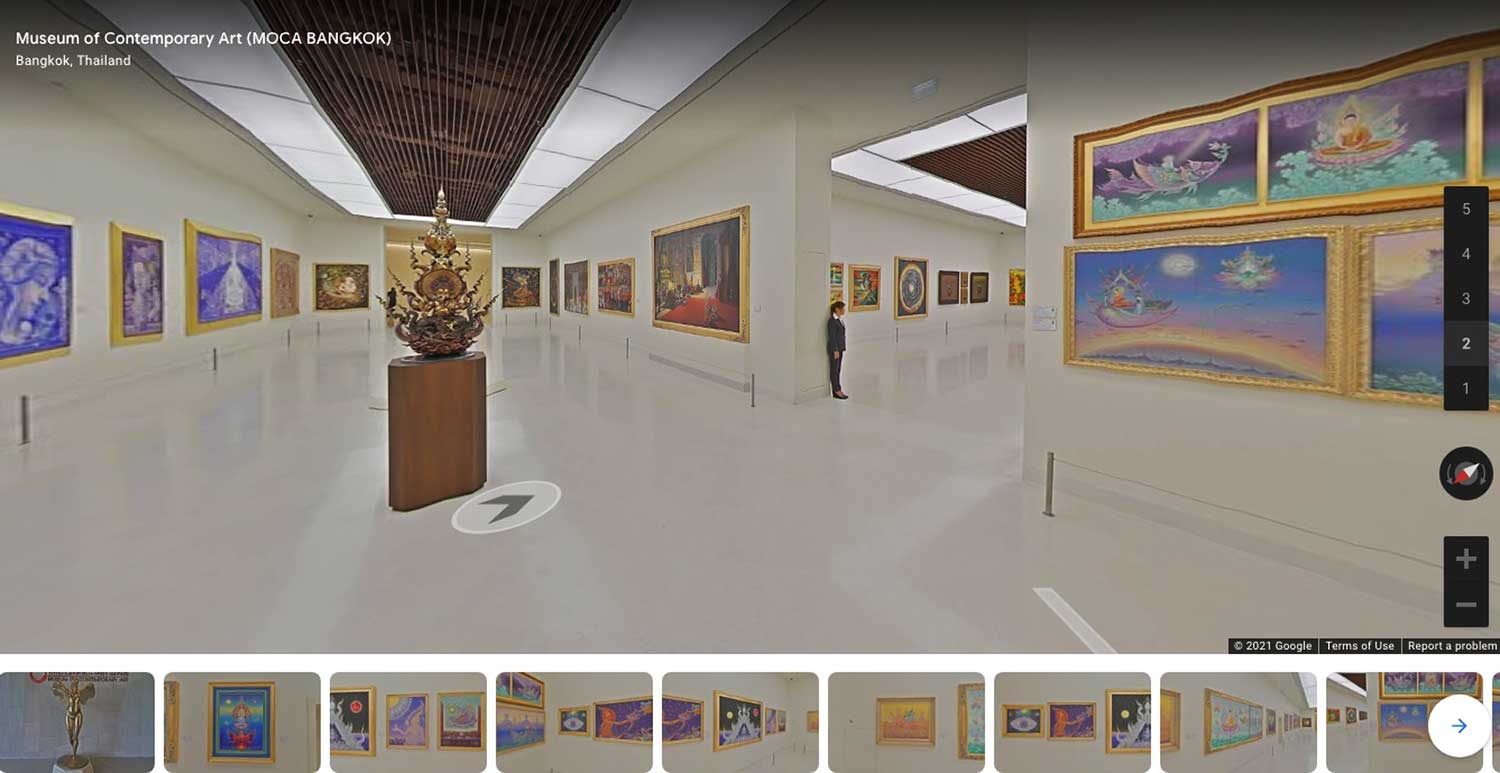 The app presents each gallery at the bottom for easy access. The numbers 1-5 on the right side indicates each floor of the gallery. 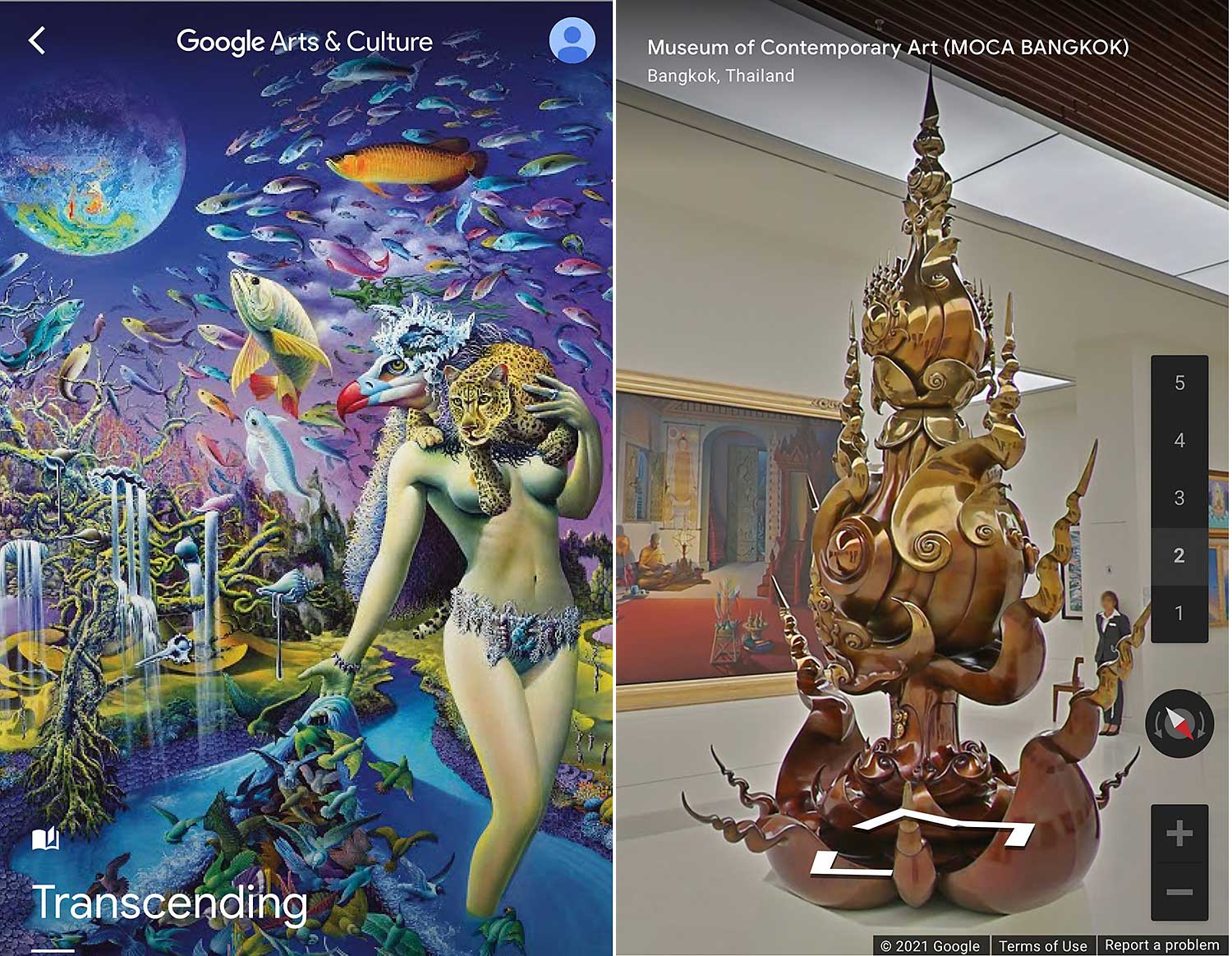 From left: Access to the online exhibition of the Museum of Contemporary Art through theGoogle Arts & Culture app; Morals, Meditation And Wisdom is the title of this bronze sculpture by Chalermchai Kositpipat in 2010. (Photos © THE MUSEUM OF CONTEMPORARY ART) 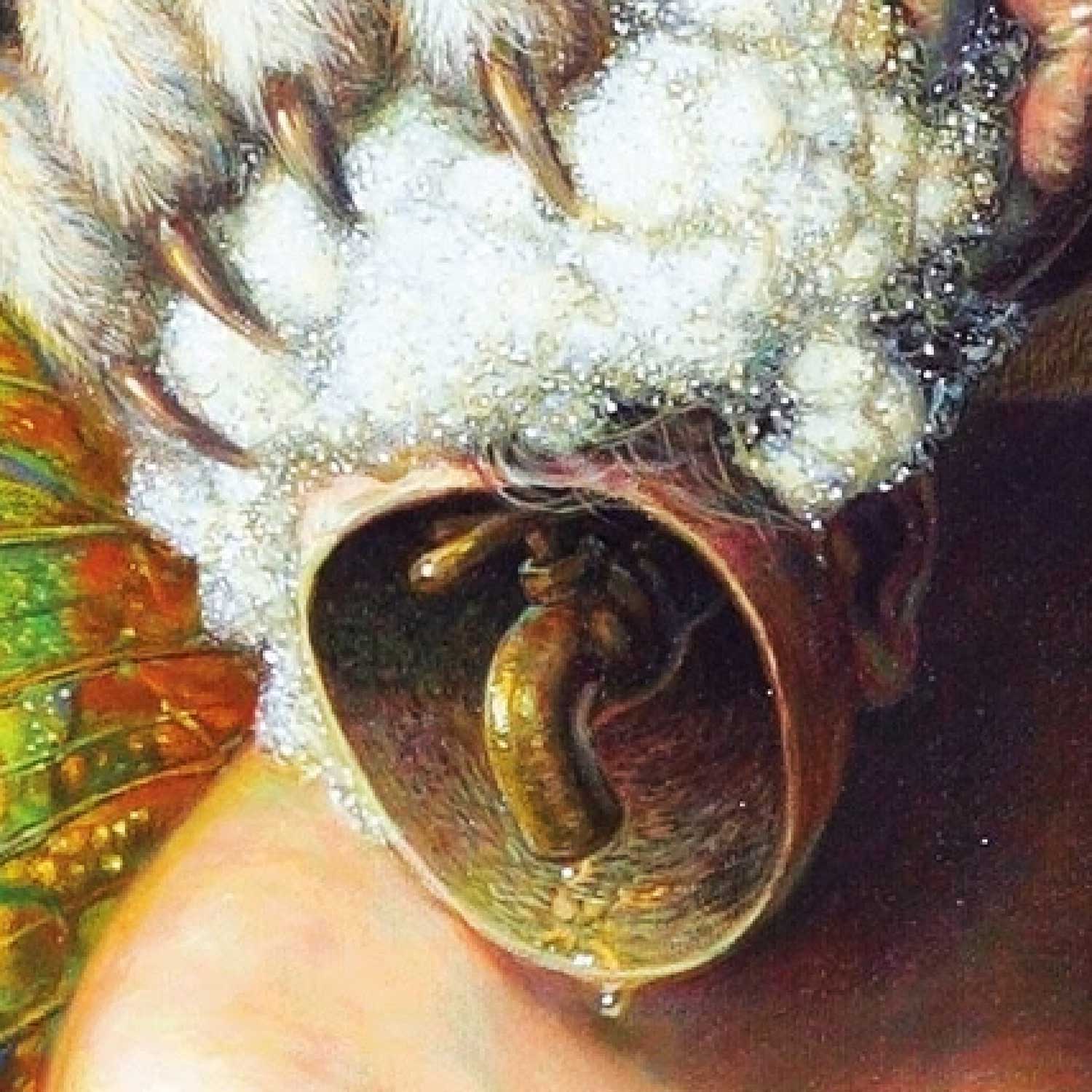 The app presents each painting in high resolution allowing you to zoom in for details. 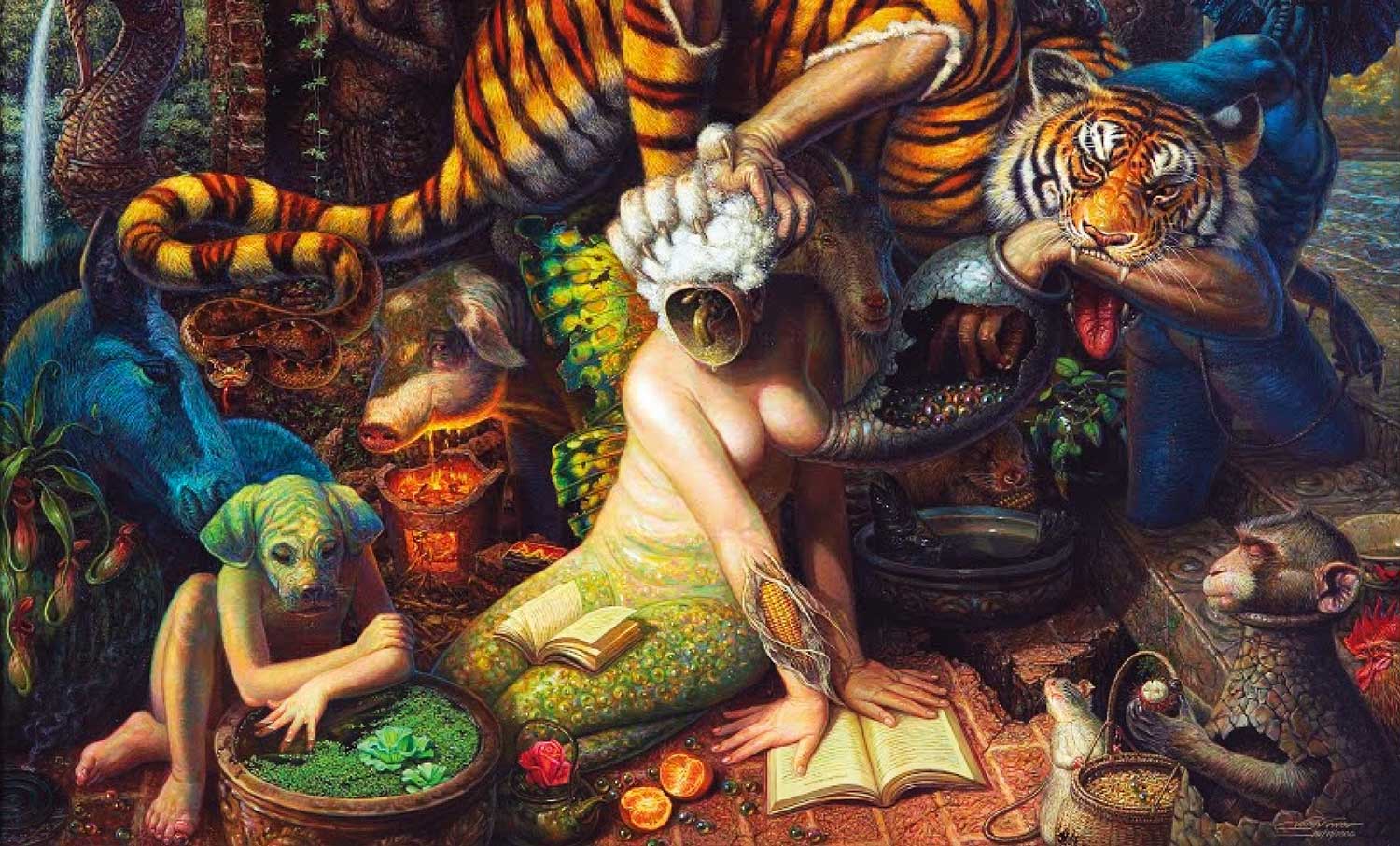 Prateep Kochabua created this painting in 2000 to portray his family members in surrealism.

The five-storey cube structure exhibits more than 400 paintings and sculptures created by highly respected or famous artists. The gallery is temporarily closed due to the pandemic but we can visit its online version via mocabangkok.com and artsandculture.google.com/partner/museum-of-contemporary-art-moca-bangkok.

But I recommend you download the Google Arts & Culture app because it will open another dimension of the virtual gallery tour. The app is available via the Apple Store at apple.co/3xHU5UW and Google Play at bit.ly/3wMgwHd.

Through the app, you can choose a collection that appeals to you. You may view them based on the time they were created (between 1979 and 2014) or colour shades that you like. When clicking on each piece of art, it will show the name of the artist, title of his or her work, the year it was created, size and medium. If you click on a picture, you can enlarge it to see the details closely. You can also send the link to others to see your favourite painting via email or social media.

The app has other fun features such as an augmented reality function. It allows you to virtually display some paintings on a wall of your living room.