Whether you are a fan of big-budget action or heist genre films, seeing massive Hollywood stars like Ryan Reynolds, Dwayne "The Rock" Johnson and Gal Gadot plastered on the poster of the latest Netflix original Red Notice felt like a no-brainer crowd pleaser. And it's true, as the film is now among the top five most-watched titles on the service, and has already logged 277.9 million hours within less than two weeks of its release.

Inspired by many beloved action/adventure flicks that came before it like Ocean's 11, Fast & Furious, The Da Vinci Code, National Treasure and even a nod to Indiana Jones, Red Notice combines familiar tropes, and throws in a feel-good, action-packed and classic buddy comedy elements to the mix.

"What Netflix really wanted to put together here was they wanted three of us to be on screen together. Dwayne, Gal and I have a kind of off-screen friendship and camaraderie that is, you know, the exact same thing you're seeing on screen. That's what they were paying for. They wanted to transfer that over to this film and be a part of the DNA and fabric of the storytelling," Reynolds said to Life about the concept of Red Notice as he appeared alongside co-stars, Johnson and Gadot, at the recent online press conference for the film.

"That's what we were excited to give them. I mean, if you come to dinner with Dwayne and I, you will see we quite literally talk to each other the way we talk to each other in this movie. It's pretty funny to be around and it's just kind of the way it's always been for us. So putting up that on the screen was a real pleasure."

Red Notice is apparently the priciest film in Netflix history with a rumoured budget of around US$200 million (6.7 billion baht) in an attempt to create their very own action/heist style franchise. And much like the universes of The Da Vinci Code and National Treasure, writer/director Rawson Marshall Thurber offers the audience a part fictional/part historical prologue about the search for long-lost treasures. In this case, it's Cleopatra's eggs, beautiful and bejewelled golden idols that were gifted by Marc Antony ahead of their wedding at the end of the Ptolemaic Dynasty's rule over ancient Egypt. After their deaths, the eggs were lost until two were discovered in 1907, while the last one remains lost until now.

The film stars Johnson as Special Agent John Hartley, an FBI top criminal profiler, who is assigned to assist Interpol in investigating the potential theft of one of the eggs on display at the museum in Rome. This global pursuit finds him framed for something he didn't do.

Hartley is accused of being involved and finds himself in the same Russian jail cell as his rival, art thief Nolan Booth (Reynolds). With no choice, Hartley is forced to partner with Booth in order to catch the most elusive art thief, The Bishop (Gadot), in order to clear his name. The high-flying adventure that ensues takes the trio across the world in a fast-paced, high-speed chase.

And with Deadpool, Wonder Woman and The Rock joining forces, Red Notice feels like a huge superhero crossover for comic book fans. Despite their off-screen frienship, the three stars still admitted that coming together for the first time on the project was like a dream come true for each of them as well.

"It's always interesting working with larger-than-life personalities like this and you never know how it's gonna go. But, you know, I'm also a fan of film and of movie stars. And people don't realise that just because I work in this industry, where I've been for almost 30 years now, I still get excited and geeked out. When Dwayne or Gal walks in the room, my first instinct isn't like they are my buddies. My first instinct is, oh my God, that's Gal Gadot and that's Dwayne "The Rock" Johnson just walking in a room right now. So I get a little sort of starstruck, just like everybody else," said Reynolds.

"I do feel the same thing," Johnson agreed. "Working with both of my amazing co-stars was great in particular Gal, who our director had in mind, and the moment he said her name, I said, Well, I love her. She's one of my favourite human beings. And the idea that she plays the most wanted art thief in the world in Red Notice automatically was intriguing to me as a movie fan." 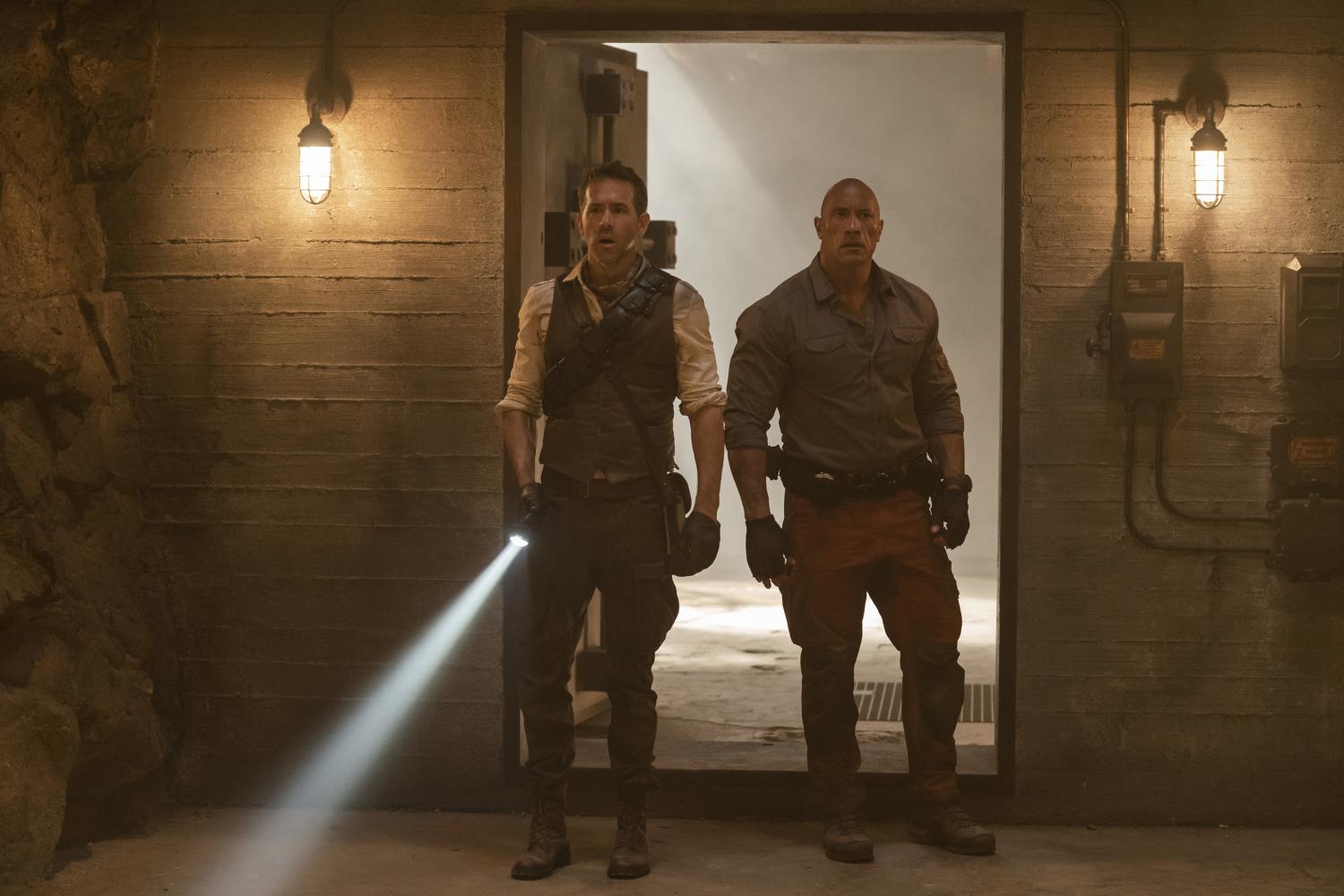 Gardot in particular seems to enjoy her new role and taking up a villainous job for the first time after portraying Wonder Woman who's a paragon for all that is good.

"To be honest, yeah, I did enjoy it a lot. It's actually a lot of fun, you know, as an actor you want to be able to explore different colours and different qualities in the characters that you play. And this one certainly gave me this opportunity and I super enjoyed portraying the bishop," she said.

There is enough action in Red Notice to satisfy fans of the genre, from the opening parkour sequence to helicopter hijinks, endless car chases, and even bullfighting. Despite these three action heroes being together, their favourite scenes in Red Notice were more subdued.

"There are so many delightful moments and scenes that we got to work on together in the film. But one of the most memorable scenes for me was the dancing scene that I did with DJ [Dwayne Johnson] and that was fun. We walk and talk and dance and do the whole thing, and I really enjoyed it," said Gadot. "I was a bit nervous at the beginning because of my poor feet and DJ is a giant. I wasn't sure what was going on. But DJ was super cool. He helped calm me down by saying, 'Don't worry. This is gonna be great'. And of course, that just made me more nervous [laughs]. But then he showed up and this guy is a freaking ballerina with the lightest feet ever. And it turned out to be an amazing experience."

Johnson also has nothing to say but kind words for his friend and co-star, plus a little tease.

"There are a lot of scenes, as Gal said, that really stick out that I think showcase all of our strengths, including her strength as an actor and her prowess. So it was nice for me to just have a front row seat to watch," he said. "But there's one scene in particular, without spoiling it for the audience, at the end of the movie.

"After this long, crazy adventure around the world, we finally see Gal's character and my character in the middle of the ocean, on this beautiful yacht. And the scene starts off with Gal coming out of the ocean. It is a gorgeous, and most iconic shot in cinematic history, because 'the boat' is so sexy [laughs]."

"Yes, sure. Just watch the whole movie for the boat alone," Gadot said.