From baseball to Aung San Suu Kyi, by way of a mysterious island

Baseball geeks will revel in the chance to cheer along with the underdog that makes it, the league-stinker that stuns the big-spender, with the help of digital tinkering. But even if you're illiterate in the great American game, this sport drama has enough of a broad sweep to hook you along with Billy Beane, the real-life manager of Oakland Athletics who, in 2001, gambled with the then-unthinkable strategy of computer analysis and took his team on a 20-match winning streak. That Beane is played by Brad Pitt _ boyish, beaming and bright-eyed _ is, if not exactly a grand slam, a pretty swooping homerun. 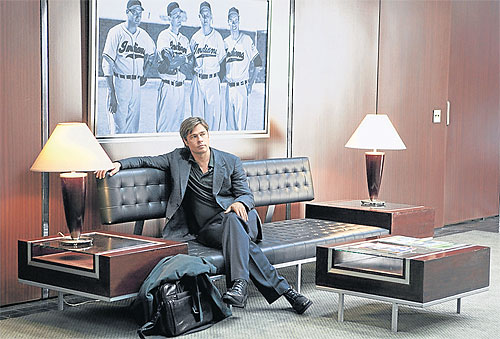 Moneyball is actually about how a new way of thinking struggles to put itself into the environment that favours traditional wisdom. It's about the adaptation from the bricks-and-mortar America to the computer-age America; the film hardly leaves the confines of a baseball park, but it's hinting at the transformation that's taking place all around its own world. Beane is a manager whose back is against the wall, and he puts his faith in an eccentric model proposed by a podgy maths nerd called Peter Brand (Jonah Hill), who believes that a complex analysis of numbers and statistics is the new winning formula. That means Beane will choose to ignore a century-old skill of scouts, experienced backroom staff and gut feelings of old-timers at his team. Beane, like Mark Zuckerberg who would come later, pushes for a change that eventually stretches the limits of his profession.

By keeping it all low-key, with the big moment followed by reflection rather than celebration, Moneyball avoids becoming a self-congratulatory fairy tale and proves that, despite the complex algorithm, the human element of sports is more perplexing than the power of calculus. Philip Seymour Hoffman chips in as a brooding coach, but it's Jonah Hill, playing the boy-man Brand, who threatens to steal the show.

Michael Caine playing an odd uncle who discovers the cragged splendour of Atlantis is probably the most surprising note in this mishmash of fantasy adventures. Among the lush topography of this mysterious island (it's Hawaii in 3D), we meet giant lizards, dwarfed elephants, super-bees, candy-coloured plants, and Capt Nemo's premodern submarine patrolled by an electric eel. It's zippy, amusing and childish, and that's exactly what the film _ a sequel of the quite forgettable Journey to the Centre of the Earth _ aspires to be.

The action is centred on Dwayne Johnson, playing a stepdad who tries to bond with his stepson by agreeing to take him on a quest to find the legendary island cited by Jules Verne, Robert Louis Stevenson and Jonathan Swift. Sucked by a whirlwind into their destination, they are joined by Caine, playing the die-hard adventurer, and two other sidekicks whose purposes are to provide laughter and female interest. Johnson, aka The Rock, gets to show off both his action-man persona and the funny-giant gig, culminating in him twitching his nipples and singing What a Wonderful World (to a ukulele). For a family, this is an agreeable Saturday outing, largely because director Brad Peyton doesn't set his sight higher than the material actually is. 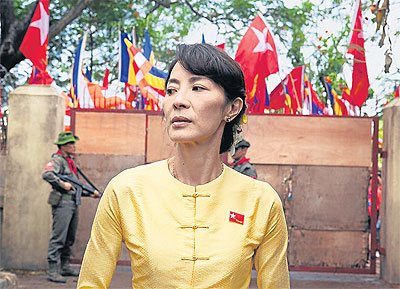 Is it even possible for a movie to do justice to such a big character as Aung San Suu Kyi? The character who's carried so much weight _ of grief, of hurt, of history _ on her slim shoulders; the character whose story isn't yet finished. (Or for the matter, can a film do justice to Margaret Thatcher? But that'll come next week). Luc Besson and Michelle Yeoh's take on the life of the Burmese opposition leader erects a grand arc through which all key moments of her personal and political journey file past, and yet its broad sweep involves a large dose of simplification and emotional blurring. What works is the film's depiction _ or speculation _ of the vulnerability that Suu Kyi can't afford to show in public, but The Lady, evidently a film that draws on the gravity of modern history, is too slight and too meek to claim such historical reach.

Yeoh gives us the Suu Kyi that's fearless and sensitive, a speaker who commands attention and a mother whose worst fear is the well-being of her sons. The accuracy of the film shouldn't be a point of debate, because the script, by Rebecca Frayn, touches on the well-recorded shifts in Burmese politics from 1988 to 2007 _ from the Oxford housewife's arrival in Yangon, her rise to become the voice and symbol of anti-dictatorship, her house arrest that forces her apart from her family, the Nobel Prize, right down to the Saffron Uprising of Buddhist monks in the capital.

For a film about one of the world's most significant figures, it's not too much for the viewer to expect a clear, deep focus on the intrigue of Burmese politics, besides the obvious knowledge that Suu Kyi is pro-democracy and the military junta is a bunch of autocratic despots. The Burmese top brass are actually shown here as a clique of superstitious, shouting tyrants bordering on being comical, and that drains away a lot of credibility from the whole setup and from the film's commitment to historical seriousness. Instead, Yeoh and her director dote on the intimate moments of Suu Kyi's domestic life, especially the heartbreaking separation from her husband, played by David Thewlis. The film-makers are more deft in dramatising these little-known details that never made the headlines, and the tears of genuine sensitivity they elicit may wash away _ or cover up _ the shortcomings in bringing this real-life human struggle to the screen.