A FESTIVAL OF ART AND LIGHT IN SINGAPORE PROMISES MUCH

Whenever I visit Singapore I think of a line from a novel I read years ago: this is a city with no past and no future, only the present. Singapore's architectural heritage is so freshly preserved that it appears brand new. And given the city's general tendency towards streamlined perfection, one gains little sense of how major changes could occur. The Turkish writer Orhan Pamuk wrote that the defining essence of his native Istanbul is melancholia; I wonder what Singaporeans think is the defining essence of their homeland. 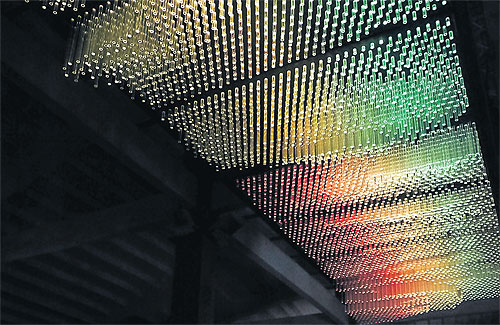 Singapore has invested much in contemporary culture in recent years. The Singapore Biennale was established in 2006 and is now a successful, internationally recognised institution. Amidst a number of impressive venues, the National Art Gallery is slated to open in 2015 and its website reads, "At 60,000m2, we will not only be the largest visual arts venue in Singapore but also one of the largest in the region." Hip galleries sprinkle the city-state and the new campus of LaSalle College of the Arts is near-breathtaking.

Within this mix is i Light Marina Bay, an outdoor light art festival established in 2010 through a collaboration between Singapore's Urban Redevelopment Authority and Smart Light Singapore. Billed as Asia's first and only sustainable light art festival, the 2012 edition has over 30 sculptures and installations surrounding the enormous bay (it can take one and a half hours to walk around the area). The theme of this year's festival is "Light Meets Asia". 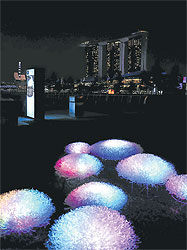 One of the functions of public artwork is to encourage passers-by to reflect on the significance of spaces and places that might otherwise remain indifferent as we go about our daily business. When the artworks are temporary, the artist ideally renders the locality memorable and changes our perception, if not experience, of it forever.

In view of my opening remarks about Singapore, i Light Marina Bay provides artists and designers with the curious challenge of responding to a place that typically rebuffs idiosyncratic or quirky interpretations. On the one hand, this challenge has great potential; on the other, one can wonder if, again, Singapore's streamlined perfection might prove resistant to altered perceptions.

Light is inevitably compelling. The works around Marina Bay glistened and shone, flashed and reverberated, seduced and blinded. Some were functionally integrated, such as Zulkifle Mahmod's Deck Journey (2012), where pastel tones highlighted the shapes of chairs facing the bay; others were conventional sculptures that incorporated light, like Tag Swee Siong's Illumination Disorders (2012), a peculiar assemblage with a glowing sunflower atop. There are small interventions and gigantic ones: the New Zealand design company Storybox stacked large shipping containers to create the effect of a temporary art gallery.

One Thai artist took part, with a team. Takerng "Be" Pattanopas created a series of meditation tents based on the umbrella shelters used by Thai monks. With the aid of the composer Treborikki, who has worked with Apichatpong Weerasethakul, and lighting engineer Preeda Intha, Takerng's lantern-like structures offered visitors a space divorced from the surroundings; one could sit within the glowing, gently moving fabric and contemplate the gentle rhythms of an instrumental soundtrack. Entitled Gap the Mind (2012), the installation was astutely positioned in view of the Marina Bay Financial Centre, thereby suggesting an array of contrasts and incongruities. 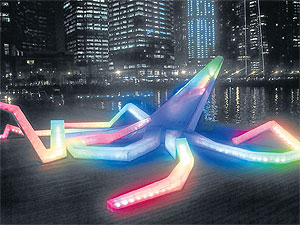 Other notable works included Olivia d'Aboville's Coral Garden (2012), which consists of surreal and peculiar eruptions on a stretch of grass. Their changing colours and tactile surfaces (apparently made of cocktail stirrers) seemed futuristic and proved compelling. Li Hui's The Gate (2007) comprises hundreds of thin beams of red light around an entrance to the Marina Bay City Gallery.

The artist wrote of his interest in "passage and enlightenment" as the red light moves out into eternity, but the installation also suggested the hoary, sci-fi image of the gateway to another world; and is all the richer for these multiple references.

Beyond the most immediate impulse to think "impress me" or "entertain me" is, of course, the critical issue of the festival's concern with sustainability. The artists were required to use recyclable materials and energy-efficient technology, with accompanying events addressing attendant interests. This moves the installations and sculptures away from strict considerations of aesthetics and site-specificity towards broader questions of what art can do for contemporary society at large. Furthermore, Singapore's apparent embrace of the so-called culture industry raises the issue of economic interest. In this respect, i Light Marina Bay emerged as probing and experimental. As for how sustainable the festival is, future editions will reveal.

i Light Marina Bay opened on March 9 and continues until April 1.
Visit www.ilightmarinabay.sg. 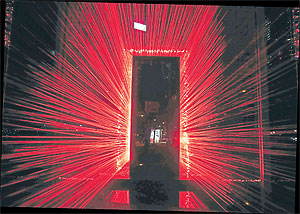 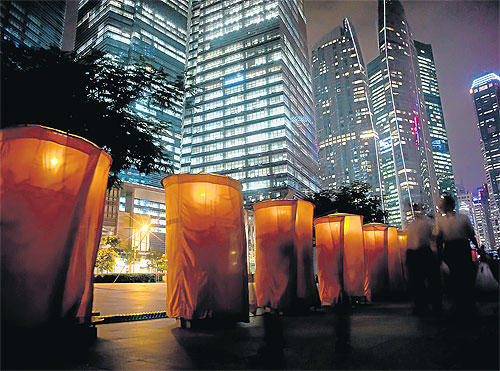