Finding ways to make their market

Producing an indie film is a struggle, but getting it to the audience can be worse. Two independent Thai film-makers talk about their new movies and the challenges reaching out to the viewers 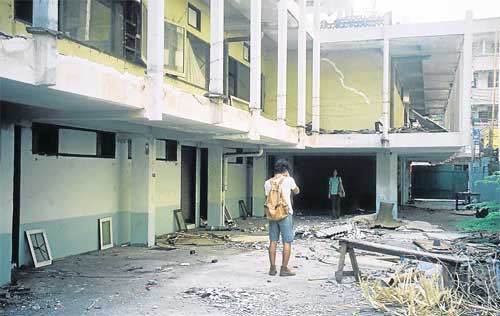 "I just want to get my film to the viewers as soon as possible," he says. So with 36, his 68-minute relationship movie that touches on melancholic memories and old buildings, Nawapol attempts a release model that may set a precedent: He decided to bypass the conventional channel of movie theatres and rents a room at Bangkok Art and Culture Centre (BACC) to screen his movie.

To draw people, he uses a steadfast, tireless social media campaign, especially Facebook, and though things are never smooth for indie film-makers, the result is worth the sweat.

Last weekend, Nawapol had 10 screenings at BACC. Each accommodated around 40 people, and he charged 150 baht a seat. All showings were full. Nawapol will have more screenings of 36 at the auditorium of Alliance Francaise on Sathorn on June 30 and July 1, and if he can repeat the full-house success he may be able to recoup the cost of the production, and of the release.

"Usually, the cycle of a Thai independent movie begins when the director shows his film at some film festival abroad to get the word going, then try to get the film into one of the so-called 'alternative' cinemas in Bangkok _ either House, Lido, or SF," Nawapol said.

"Once I showed my short film in Romania, and despite that it's a comedy, nobody laughed. The audience didn't get it the way we get it. That got me thinking that maybe we can try to find a way to release our films here without having to rely on traditional cinemas and without having to travel to festivals first. We can rethink the cycle."

In the era when young people do not mind watching films on smaller screens or through digital media, the prestige of having a film released in a real "cinema" may not hold the same significance it once did. The wide reach of the internet is also a critical factor in orchestrating guerilla-style personal marketing to make potential targets recall the title.

"Facebook is free, and that's all I have to promote my film," says Nawapol. "It's hard work though, since I have to monitor the film's page and update the activity all day every day."

But it's not just Facebook; a film's success largely comes from the film itself. Nawapol may have made 36 as a low-budget indie film (it was made at around 120,000 baht), but he is also known as a co-scriptwriter of a few mainstream hits, including the phenomenal Rot Faifa Maha Na Ther (Bangkok Traffic Love Story). It's safe to say that he has enough clout, and 36, more or less a love story, is also a film that has a broader appeal than, say, Boonsong Nakphoo's rural poetry about poor people (see above).

"I try to staddle the two extremes," Nawapol said. "When I write a script for a 'mass-market' movie, I know what I have to do. And when I do very personal films, I can basically do what I want. But to take this middle path is not easy. It's what I want to try and see how the result will be. It's true that when you write a film, sometimes you already know from the plot if it will attract people. But a film-maker can only tell the story he wants, that's the whole point."

36 will be shown at Alliance Francaise on June 30 and July 1. Go to http://www.facebook.com/nawapol.thamrongrattanarit#!/36exp

Making such a commercially unattractive movie is a trial, but to bring the finished film to the audience is another, perhaps even more tiring.

Four Stations has been showing at Lido Theatre in Siam Square for five days _ its final screening is this evening at 6.30pm. Boonsong was able to make the film, which strings together four short stories by four master writers, with the support of the Thai Khem Kang fund given out by the Ministry of Culture two years ago. To give his movie a chance to reach the viewers, the director decided to rent out one slot a day from Lido, at the cost of 5,000 baht per day.

"It's not easy. Though my film attracts people, it's still not enough to cover the screening cost," says Boonsong, a director whose previous film Poor People The Great is a story of a farming family in his home town.

"Initially I went to a cineplex operator to get my film released there, but I couldn't convince them my film would have strong PR that could bring in a lot of people. So I ended up at Lido, who's helpful, but I still wish there would be more people showing up."

Getting a film released is a hurdle faced by most independent film-makers; the lack of public space dedicated to non-mainstream movies made without a business agenda has long been an issue that seems to have no concrete solution. The government's idea of supporting indie film-makers often excludes a plan to make sure that their films, once finished, will have an outlet and reach an audience.

Boonsong's Four Stations is a good example of a movie made more with heart than with a calculator. The director adapted four short stories, each taking place in the four regions of Thailand, by four respected writers: Mala Kamjan (North), Wat Walayangkul (Central), Lao Khamhom (Northeast) and Paitoon Thanya (South).

Different in details, these stories all come together as they sketch a rugged portrait of rural Thailand and the perpetual struggle against the new era _ and against the changing values within itself. The story of an ethnic Mon man who comes to work in Bangkok is especially poignant in its bare-bone aesthetics resembling the neo-realist.

"I think independent film-makers will have to find a way to get their films out to the public without compromising their idea and intention," says Boonsong, who plans to show his movie at various universities around the country.

"I'm thinking that for my next film, I might just buy a projector and screen the film outdoors the old-fashioned way. Like nang klang plaeng. I mean, why not?"

Four Stations has its last screening at 6.30pm today, at Lido.