Back from the bin and mostly recycled
Life
Arts & Entertainment

Back from the bin and mostly recycled

Veteran alt-rock outfit Garbage revisit the sounds of the '90s on their comeback album, but while not quite trash only nostalgic fans will find this one a treasure 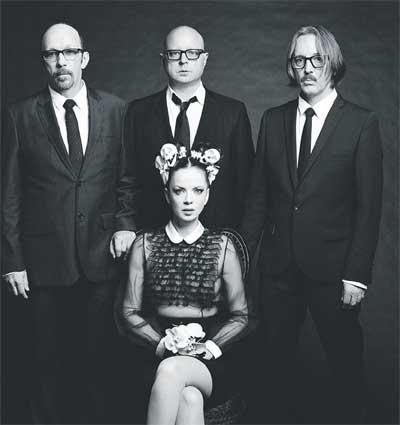 GARBAGE/ NOT YOUR KIND OF PEOPLE

To put things in perspective, let's first dial back to the mid-'90s when the radio was buzzing with alternative rock acts. Made up of Scottish vocalist Shirley Manson, and American trio Duke Erikson (bass), Steve Marker (guitar) and Butch Vig (drummer, who, among other notable feats, produced Nirvana's seminal album Never Mind), Garbage were one of the key players of that era _ evidenced by their multi-platinum 1995 eponymously titled debut and the similarly awarded second album, Version 2.0.

They produced a string of alternative rock anthems including Queer, Stupid Girl, Only Happy When it Rains, Push It and When I Grow Up.

During the noughties, the quartet went on to release slightly less memorable albums _ Beautiful Garbage and Bleed Like Me _ followed by a perfunctory greatest hits compilation. Seven years have passed and a lot has happened since then: the band entering a hiatus, Manson dabbling in acting and working on her solo project (which was shelved on the grounds of it being ''too noir'' according to her label), and the music industry moved on.

Not fazed by the latter, Garbage's fifth album, Not Your Kind of People, sees the group sticking firmly to their '90s alt-rock guns.

The anthemic Automatic System Habit opens the album with a rush of keyboard stabs and riffs later accompanied by Manson's infectious, angsty hook in which she menacingly warns ''I won't be your dirty little secret.'' Almost two decades and five records in, Shirley's super-vixen persona is still very much unscathed. The excitement quickly evaporates as the album wears on, though. The same fuzzy-guitar/catchy-hook formula continues to dominate the album _ more so in the following tracks, Big Bright World, Blood for Poppies, Control, I Hate Love and Battle in Me.

With such a big cluster of guitar riffs and indulgent use of electronics, the title-track Not Your Kind of People, Sugar and Beloved Freak do offer moments of (relatively) quiet bliss. The latter two, in particular, refreshingly showcase the essence of Manson's voice almost on a par with the perfection of previous singles such as #1 Crush or even Bleed Like Me.

Apart from their old hard-core fans who are still clutching to '90s nostalgia, the cold hard truth is that Not Your Kind of People probably won't resonate with today's audiences. It may be classic Garbage, but the heavy-handed production _ consisting of grating guitar riffs and Manson's excessively distorted vocals _ would have been a little redundant even when the band reigned supreme.

Known for incorporating elements of luk thung (Thai folk music) into their music, Smallroom's indie rock four-piece the Rich Man Toy, aka TRMT, crank out a new single, Thida Prajam Amphur (The District's Beauty Queen) taken from their third studio album The Richman Thai. Starting with light post-punk guitar riffs and sparkling keyboards, the track wastes no time in putting a smile on our faces with cute lyrics delivered by the ever-charming frontman Veeranat Tippayamonthon. The lam tud-inspired (Thai style antiphonal singing) breakdown during the song's second half is probably one of the most fun moments in Thai music in recent memory.

The American R&B crooner and one part of LA hip hop collective Odd Future, Frank Ocean caused quite a buzz when he wrote an open letter about his same-sex first love. Quite appropriately on Bad Religion, from his second outing Channel Orange, Ocean openly laments an unrequited love for another man. "If it brings me to my knees, it's a bad religion," he wails despairingly over awe-inspiring organ and strings. "Unrequited love to me is nothing but a one-man cult/And cyanide in a styrofoam cup," he sings, brilliantly encapsulating his grief.

American pop rock outfit Neon Trees definitely have everybody talking about Everybody Talks, the first single from their second album, Picture Show. Building on the infectious retro rock sound, the song hits home with relatable lyrics: "I could hear the chit chat/Take me to your love shack/Mama's always gotta back track/ When everybody talks babe." It seems the band has taken things less seriously this time around, which serves them well. This is a no-frills pop rock tune that should easily get anyone humming along.

The Canadian electronic duo give us a teaser of their upcoming album with this five-minute harrowing raver.

Comprising vocalist Alice Glass and producer Ethan Kath, Crystal Castles have exponentially matured since their highly lo-fi and experimental debut back in 2008. Plague picks up where their second album, Crystal Castles II, left off, with unflinching bursts of synthesisers coupled with Glass' signature cry. If this is any indication, their upcoming album will prove to be yet another thrilling trip to the dark side, and we can't wait for it.

Winner of MTV's Brand New for 2012 award, 19-year-old Brighton-born singer Conor Maynard has been dubbed "the Brighton Bieber". And for good reason, given his young age, squeaky-clean image and song-and-dance combo. Maynard follows up his first single Can't Say No with the equally catchy Vegas Girl, an urban pop number featuring the dubstep-laced intro and chorus that goes "This is for the girl that get down low/The whole club wanna see you go/Ey, shake, shake like you're famous, girl." Now, is it just us or have we all heard those lines before?