Twenty-five Thai films were yesterday listed as National Cinematographic Heritage under a Thai Film Archive project, now in its second year, that seeks to recognise and preserve films of historical and cultural importance. The objective is to raise awareness about the need for conservation of the country's audio-visual treasures in a world increasingly ruled by fleetingness and evanescence. 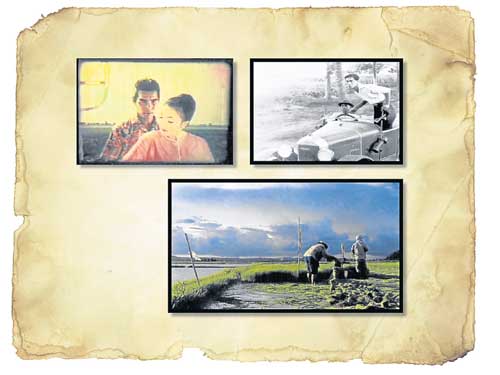 "The selection and registration of these films as national heritage is meant to ensure they will not be lost or forgotten as time progresses," says Thai Film Archive director Dome Sukawong. "The announcement is made on Oct 4 every year [starting last year], because on that day 46 years ago the archive held its first meeting in Bangkok, chaired by Unesco, that initiated the plan for film preservation for cultural and historical reasons."

It's an interesting list of old movies and historical clips, as well as fairly recent works that capture the state of the nation and film-making temperament. There are newsreels, documentary films and features, as well as one educational short film devoted to the subject of parasites. All in all, they sketch the journey of the Thai movie industry and history of the past 85 years. These films will be preserved, restored if needed, and then screened or made available to the public.

[ 1 ]Choke Song Chan (Double Luck): This movie _ or the one minute of it that survives the ravage of time _ was a historical first by a Thai filmmaker, shot back in 1927.

[ 2 ]Cheewit Kon 2475 (Life Before 1932): This is a "home movie" of Prince Rangsit Prayoonsak that documents the life in the palace before the 1932 Revolution that turned Siam into a constitutional monarchy.

[ 3 ]Hae Rattathamanoon: This 1933 news film shot by Prince Kampaengpetch records the procession bearing the Thai Constitution through various sites in Bangkok that ends at Sanam Luang.

[ 4 ]A newsreel documenting the return to Siam of the future King Rama VIII in 1938. The prince was only 13 then. Arriving with him were his younger brother the present monarch King Bhumibol, the late Princess Mother and Princess Galayani Vadhana.

[ 6 ]The Free Thai Movement military parade in 1945. Shot by a cameraman of the Allied Forces, the clip shows the procession of the soldiers fighting under Seree Thai, or Free Thai, which eventually saved Siam the ignominy of ending up on the losing side of World War Two.

[ 7 ]Hed Mahadsajan (The Amazing Incident): The first Thai animation film made by Payut Nga-krachang in 1955.

[ 8 ]Sawan Mued (Dark Heaven): Directed by Ratana Pestonji in 1958, this heartbreaking tragedy tells the story of a garbage scavenger and a homeless woman.

[ 9 ]Mae Nak Pra Kanong: This film version of one of the most popular Thai ghost stories was made in 1958 and remains a legend, even after nearly 50 more adaptations since. The director was Saneh Komarachun, with Preeya Rungrueng playing Nak the melancholic and wrathful ghost.

[ 11 ]Mue Jone (Hands Of A Thief): This 1961 film was one of the most successful films directed by Vijit Kunawut.

[ 12 ]Ruen Pae (The Houseboat): One of the most beloved Thai films of all time, it was shot on 35mm super cinemascope with sound on film. Made in 1961, it stars a Hong Kong actress in the lead role to boost the film's appeal and distribution overseas.

[ 13 ]Bantuek Rak Pimchawee (The Love Diary Of Pimchawee): This 16mm movie from 1962 was the first film in the career of Petchara Chaowarat, who'd go on to become one of the most iconic Thai actresses in history.

[ 15 ]Saneh Bangkok (Bangkok Charm): This 1966 film tells the story of young men and women who leave their villages to pursue their dreams in the capital.

[ 16 ]Paya Tua Jeed (Tapeworms): The man who discovered Gnathostoma spinigerum, an intestinal parasite, was a Thai doctor named Sawas Daengsawang. When he presented his report in Tokyo in 1967, he made a short film to illustrate his finding.

[ 18 ] Insee Thong (The Golden Eagle): This 1970 film was the last in the long and illustrious career of Thailand's legendary actor Mitr Chaibancha. Mitr, while shooting the last scene of this action film, fell from a helicopter ladder to his death.

[ 19 ]A film clip recording the historic meeting of two spiritual leaders, the Dalai Lama and Thailand's Buddhsdassa Bhikku. The meeting took place in 1972 at Suan Mok.

[ 20 ]Hanuman Pob 7 Yod Manut (Hanuman vs The 7 Superheroes): This 1974 fantasy film brings a mythological Thai hero, the monkey Hanuman, to a battle against Japanese TV superheroes led by Ultraman.

[ 21 ]Thongpoon Khok Po Rasadorn Tem Khan (The Citizen): This 1977 film by MC Chatreechalerm Yukol is one of the most famous social-realist films. It tells the story of an Isan taxi driver and his ordeals in cynical Bangkok.

[ 22 ]Kru Bannok (The Country Teacher): This 1978 film was a major hit when it came out. It tells the story of a idealistic teacher in a remote village who fights injustice and corruption.

[ 23 ]Muang Nai Mok (Village In The Mist): Adapted from Albert Camus' The Misunderstanding, in which a mother and daughter kill every guest who passes by their lonely hotel. This 1978 movie represents an early attempt at arthouse film-making.

[ 24 ]Kon Jorn: One of the earliest independent Thai films, this 1999 film presents a unique, acerbic vision of class and hobo-ism through the story of a homeless man and family of a magician. The director, Attaporn Thaihirun, passed away two months ago.

[ 25 ]Sawan Banna (Agrarian Utopia): The 2009 documentary film fuses real-life recording with elements of fiction and tells the story of a farming family in the North in the midst of political uncertainties and injustice.