For 42 years Scala cinema has projected films as film was supposed to be projected: with 35mm print, rolled into a plate as light beams through the strips and atomises the moving pictures that hit the screen. Now the theatre has evolved, along with the whole world. 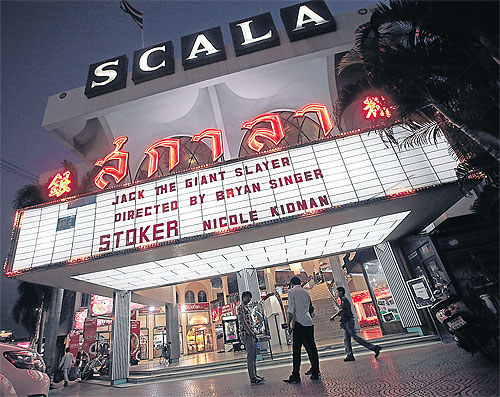 As the last functional stand-alone cinema in Bangkok, Scala, Siam Square's icon, is also among the last movie houses in town to have upgraded its projection system to digital.

Professional estimates have it that by the end of 2015, the global transformation to digital projection will be complete. More than 80% of cinema screens in Europe are now digitally equipped, for instance, and there are more than 12,000 digital screens in China as of last year. About half of the movies we see in Bangkok today are being shown digitally _ through Digital Cinema Package, a sort of hard drive that plays high-definition video images.

Scala, one of the two cinemas of Apex Group in Siam Square, showed its first digitally projected film last Thursday, the thriller Stoker starring Nicole Kidman. At the nearby Lido, also an Apex outfit, two of the three screens have already been upgraded to digital; the first film to be shown in the new format is Jack The Giant Slayer.

The upgrade to digital of Scala and Lido means more than just technical advancement. Last year, news about the imminent demolition of Lido, and possibly Scala, prompted a quick and passionate outcry of people who regarded the two cinemas as historical landmarks and even as the last stronghold against the fervid urban expansion. Even though Chulalongkorn University, which owns the space, alleviated fears by assuring that there was no immediate plan to demolish the two cinemas, the situation seems to be hanging in uncertainty.

By investing in the expensive digital projectors, however, Apex seems to be indirectly giving hope to its fans. If Scala and Lido were about to be demolished, as the rumour mill keeps stating, the operator wouldn't have spent money upgrading the system. Or at least that's the reading from observers. An executive of Apex doesn't confirm this though. In a phone conversation, he only said that the cinemas need to adapt to the changing times, since digital is becoming the norm. He didn't elaborate on the future of Scala and Lido.

Most cineplexes charge higher prices for digital screenings, but Scala and Lido are charging the same 100 baht _ still the cheapest. This is why people love them, analogue or digital.