Not many new faces can make an impressive debut, but 19-year-old Jirayu "James" Tangsrisuk shines as Khun Chai Puttiphat in the Suparbburuth Chutathep period drama series on Channel 3. 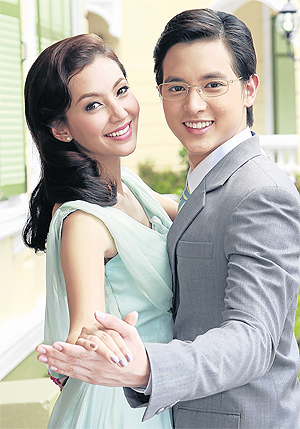 The cute and playful country boy hails from Phichit, and his background and character is a far cry from the noble and conservative Khun Chai Puttiphat Chutathep.

But by putting on a pair of spectacles and a mature demeanour, the inexperienced actor credibly becomes a 30-something neurosurgeon, a man who has never fallen in love and meets his dream girl. From rationally adhering to principles, he learns to listen and follow his heart.

Premiering in March, the storyline about Khun Chai Taratorn wasn't as sensational as expected. The following, focused on Khun Chai Pavornruj, started a buzz and now Khun Chai Puttiphat is the talk of the town because of the charming James as well as the engaging story.

Khun Chai Puttiphat is the third son of Mom Chao Vichakorn Chutathep, who had three wives. They all died from a car accident, and the five siblings are raised by their grandmother and her sister, who want them to marry ladies of the same social status.

The reserved neurosurgeon, however, meets the humble Krongkaew, who was crowned Nang Sao Sri Siam 1961. And he does whatever he can to save her from becoming the mistress of an influential army general, known for "collecting" beauty queens and beautiful women, all in all about 100 of them.

The virile army general is said to be historically based on a real person, whereas Khun Chai Puttiphat is inspired by a leading neurosurgeon and uncle of the novelist, an ob-gyn whose pen name is Kaotam.

Despite his tender age, James has the clean-cut look of a doctor and landed the role. His manager discovered him on Facebook, and persuaded the Phichit boy to enter showbiz. Along with acting, the freshy is studying at Rangsit University's Faculty of Communication Arts.

The heart-throb is one of the three new actors cast for Suparbburuth Chutathep's leading roles, the other two being Tanin Manoonsilp as Khun Chai Ratchanon and James Mar as Khun Chai Ronnapee.

In a TV interview, James said that the fourth soap about Khun Chai Ratchanon will be even stronger, while co-star Ranee Campen added that Khun Chai Ronnapee will conclude in the most enthralling way.

By then, Channel 3 fans would have spent about four months in front of the box following the Suparbburuth Chutathep series.