The story of their life
Life
Arts & Entertainment

The story of their life

Dwellers of Klity village, an ethnic Karen hamlet set deep in the forest of Kanchanaburi province, are known for their quiet and painfully shy disposition. At an outdoor movie screening held earlier this month, however, they very much acted out of character. 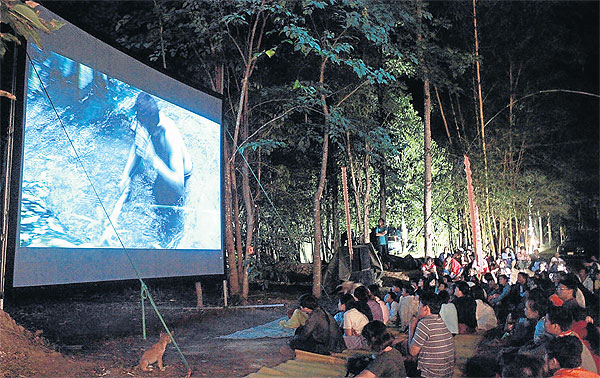 People watch the outdoor screening of By The River at Klity village on April 4.

They laughed, they chatted and they clapped in a jovial mood, and the rare display of emotion was perfectly understandable. The movie they were watching was By The River (Sai Nam Tid Chua, literally translated as “infectious river”) and the story isn’t just close to their hearts, it is their story. The documentary revisits one of Thailand’s most catastrophic environmental disasters: the toxic lead poisoning of Klity Creek in the 1990s. This is the first film made about the incident. Though the director, Nontawat Numbenchapol, is from Bangkok, the film production outfit is called Made in Klity, and it is set in Klity village starring actual villagers who have been affected by the case. It is a mixture of re-enactment, observation and poetic sketches of humanity and nature.

The short version of the film was shown on Thai PBS last year and the 60-minute version won a special mention award at the Locarno International Film Festival in Switzerland last August. It will have a limited release across cinemas in Bangkok and Chiang Mai on May 8.

For a village that has no televisions, the movie experience seems surreal.

"I didn’t feel like I was acting in the movie ... not one bit," said Sawitree Arunsrisuwan, 26, a kindergarten teacher from the village. “The director just set up the camera and simply told me to act naturally and chat with other actors as if I was talking with friends. Sometimes, the director just let the camera roll and simply walked away.’’

Sawitree “plays” the leading role in the movie. But she partakes in no meet-and-greets or autograph signings. 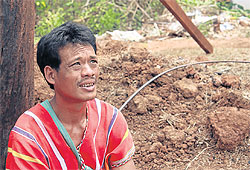 "I think villagers here have different lifestyles when it comes to entertainment consumption. I do not feel like a movie star, and people in the village have not really become very excited about it. But we do feel glad that the film has won an international prize," she said.

"It feels amazing that the film is being shown here," said Nontawat, the director. "Most of the villagers have never seen a movie on a big screen before, so it’s great that the first film they got to see was a film about themselves, even though it’s not an entirely happy story."

After the movie ended, villagers clapped and praised the director for showing the beauty of their home and the honest account of their lives and pollution in their community. After the lights went down, they walked, in the dark, through the forest, back to their homes. Klity village does not have any electric power at night — that’s why there are no televisions or mobile phone signals. The film screening therefore, powered by a generator, is a rare and very brief treat.

"Afterwards, we will go home and wake up and use that same old polluted river again. We still have to catch and eat the contaminated fish. We will still have to live in fear of lead content in our blood stream as usual," said Kamthon Nasuansuwan, a 46-year-old community leader.

The reality of Karen people who live in Klity village is actually more dramatic than in the movie. Life in this remote jungle outpost is the living proof of how inefficient Thai authorities can be in dealing with industrial pollution and how ignorant the central government can become when dealing with the plight of the poor and underprivileged. It is estimated that the lead mine near Klity might have been releasing toxic sediment ever since the early 1980s. Despite the mine being forced to close a decade later, the authorities have repeatedly failed to solve the environmental disaster, forcing villagers to seek help from activists and the media.

Approximately 15,000 tonnes of toxic lead sediment remains uncollected, sitting on the river bed. The poison has infected aquatic creatures and plants, which are the primary food source for villagers. Scientific research shows that these fish and plants contain more than 700 times the acceptable level of lead content. Around 30 villagers with high lead blood levels have been diagnosed with having lead-toxic illnesses.

Fifty-one-year-old Vasana Nasuanborisuth, who also appears in the movie, suffers from permanent blindness as toxic lead has destroyed her optic nerve. Many children in the village have also developed mental and brain deficiencies, believed to have been as a direct result of lead poisoning.

Last year, the Administrative Court ruled that the Pollution Control Department (PCD) must pay 177,000 baht to 22 families in the village as compensation. More importantly, however, is the task of cleaning up the river, which is far from complete. 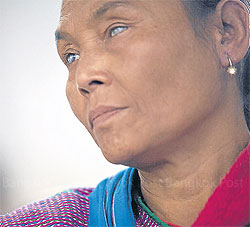 "We spent 16 years waiting for the Administrative Court to deliver the sentence and 16 months after the court verdict, the PCD asked Khon Kaen University to conduct another study [about the pollution]. So, I do not know how long the villagers have to wait for the clean-up,’’ said Surapong Kongchantuk, director of the Karen Studies and Development Centre.

For visitors — and for the viewers of By The River — Klity village is an idyllic place where quiet, but ever-smiling, Karen villagers still live a slow and traditional life. To a small extent, that romantic pastoral image rings true. The river still looks rather charming and inviting. Villagers still dive down to catch fish — as shown beautifully in the film. Everything seems pleasant, until that is, the visitor stumbles across the signs put up by the PCD stating that fish and vegetables are tainted with toxins and unsafe to eat. First-time visitors might be shocked, but villagers are used to it. The signs have been there for almost two decades.

Since that time, villagers who fear the effects of the pollution use water that is piped from the mountain. But that supply is insufficient and unreliable, forcing many of them to consume water from the Klity stream. The official PCD statement is confusing; the agency insists that boiled water from Klity Creek is safe to consume, but fish and water plants from the same source are laden with toxic lead content.

Pollution has brought financial burden to this poor village where people make money from planting corn. Some villagers with enough money purchase pricey meat and fish brought from outside the village. Those who can’t afford to, catch fish from the river.

The 22 villagers who were awarded compensation from the lawsuit have decided to donate their money to form a village fund. The fund will be used to help improve the education of the younger generation. Part of the fund will also be used to build new
water pipes to draw water from the mountain. The new water pipe system will cost around 3 million baht. Both village and non-governmental organisations are raising funds for this project.

Villagers can no longer afford to wait for help from the authorities, said Kamthon.

“We have been waiting for too long. It is better to do something ourselves. You cannot rely on other noses to breathe for you,” he said.

“We do not know when the river will become clean and safe, but villagers have no choice but to keep on fighting. What we want and fight for is very simple. We want the same river back.”

Experts say it will take a few years or more after all sediments are removed in order for the river to return to a normal and safe condition. The remedy, if it comes to pass, will be historic for the country too. The cost is believed to exceed the original estimate of around 100 million baht.

It is believed that a new bypass river needs to be created during the clean-up of the 19km stretch of river. Then, after all the sediment has been removed from the village, the area may then be considered part of Lam Klong Ngu National Park. After the clean-up, ecologists need to return the fish and aquatic creatures. Perhaps then, and only then, Klity’s nature may once again recover.

Like all Klity villagers, Kamthon feels positive about the future, despite the challenges.

“I might die before seeing the river become clean again. But my children might one day be able to enjoy using this river.’’

For more information on the water pipe project, visit enlawfoundation.org/newweb/Contact Supaporn Malailoy of ENLAW THAI Foundation at 086-841-8186 or Thanakrit Toengfah at 087-808-7764.
The account for donation is ENLAW THAI Foundation; Siam Commercial Bank: Sri Wara Intersection/ Saving Account 140-262534-7.
The film By The River will be screened at SF CentralWorld and Meya Chiang Mai on May 8. 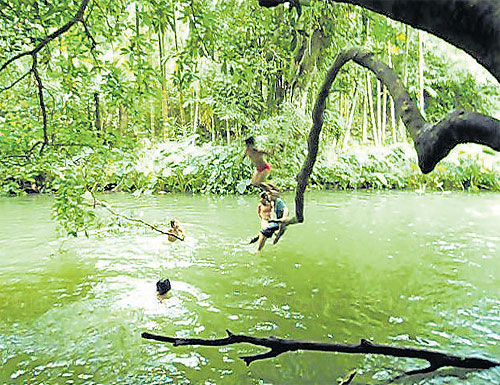 Klity Creek is the lifeline of Karen villagers. Despite the river having been polluted with lead Meya Chiang Mai on May 8. sediment for over 16 years, villagers still use the water.