In its restaging at Thonglor Art Space, Bang-La-Merd teaches the same lessons to a potentially different audience

The tag line for Ornanong Thaisriwong's B-Floor Theatre solo performance Bang-La-Merd two years ago, was "My Wonderfully Smiling City". For its restaging, which begins today at Thonglor Art Space, however, it has changed to "The Land I Do Not Own". 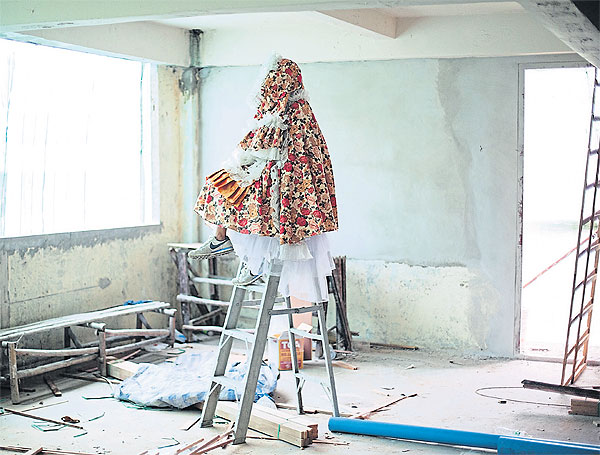 A mixture of monologues, physical movement and audience interaction, the performance tackles the sensitive issue of people's rights, freedom and violation. It was met with critical acclaim, winning a best original script award from the International Association of Theatre Critics (Thailand). La-merd is Thai for "to violate", while bang can be roughly translated to mean an area or neighbourhood.

"The biggest difference between then and now is how there was an election then," said  Ornanong, a 34-year-old actor who audiences might remember from her roles in Damkerng Thitapiyasak's Nang Nak The Museum; Nophand Boonyai's Sunflower; and Nikorn Saetang's Sao Chao Na (Girl Of The Soil).

"It's 'The Land I Do Not Own' because the situation is different. Where are we right now? We are in a place where we have to do whatever they tell us to do and we didn't even elect them. Where have they come from? It's like we're on other people's property, we are living by rent."

Ornanong said credit for the production's revival can be attributed to Thonglor Art Space's artistic director Wasurat Unaprom. Wasurat wanted a variety of content for the space, which opened last year and has until now featured comparatively lighter productions.

"It's funny how I could have taken the original version and performed it again now," said Ornanong. "Because everything still applies to what's happening now. Not only have we not moved forward, we are now going back further than before."

Ornanong said the idea for Bang-La-Merd was sparked by the case of Ampon Tangnoppakul, better known as "Ah Kong" or "Uncle SMS", who was in 2011 charged with lese majeste. The issue of Article 112, she said, "had never felt so close to people's daily lives".

"The case wasn't presented much in public," Ornanong said. "The evidence was very weak; he didn't get bail. It was a time when there was a lot of witch-hunting. People started to take sides, they started to use emotion over reason. I felt the issue was so close to my life, and that there must be something wrong with what was going on. It would be dangerous not to feel the abnormality of the situation."

Ornanong wasn't sure whether her work would have an impact on society, but she felt the case was something that deserved to be put on record.

The feedback Ornanong received from Bang-La-Merd's first run was mixed. The fact that its revival is being performed at Thonglor Art Space — and not at Pridi Banomyong Institute, where B-Floor is based — is a matter of concern: she isn't sure what type of audience will come. She has had a similar experience before, when Bang-La-Merd was restaged at Burapha University's theatre festival, where anybody — university professors, students and people who lived in the area — could attend.

"We had a talk after every performance," says Ornanong. "Some audience members were very sensitive. They said there are so many other issues out there — capitalism for example — and asked why I had to talk about this issue. Others said I was being inconsiderate toward people with different views. All this was proof that the performance worked and that I have to do it over again with the same intensity"