Muay Thai master Sagat Petchyindee inspired one of the most fearsome video game characters, but struggled outside the ring

published : 12 Jun 2016 at 04:00
newspaper section: Spectrum
writer: Chaiyot Yongcharoenchai
BOXED IN: Sagat was introduced to muay Thai boxing at the age of 11 by one of his brothers. PHOTOS: Chumporn Sangvilert

Before HD gaming consoles, gamers in the '90s spent most of their time at arcades or on home video units.

One of the most popular games was Street Fighter, which had among its retinue of characters a Thai kickboxer called Sagat.

Sagat was a villain and, as the game's final boss, notoriously hard to beat. His character wore muay Thai shorts with no shirt and had a patch over his right eye. He became one of the most hated and feared characters, with a strong punch, deadly uppercut and near-unbeatable triple kick.

But not many people know the character was based on a real person: Sagat Petchyindee, a legendary muay Thai fighter and trainer who also tried his hand at Western-style boxing. Many of the moves that appeared in the game were ones he used in his real and illustrious kickboxing career.

Sagat fought his way to fame and rose to the top of his sport, earning more money than he could ever imagine both as a muay Thai fighter and boxer.

Yet despite his success in the ring, Sagat struggled to fight personal demons, and the fame and fortune helped trigger a downward spiral which ended in him being jailed twice as a result of his drug dependency. 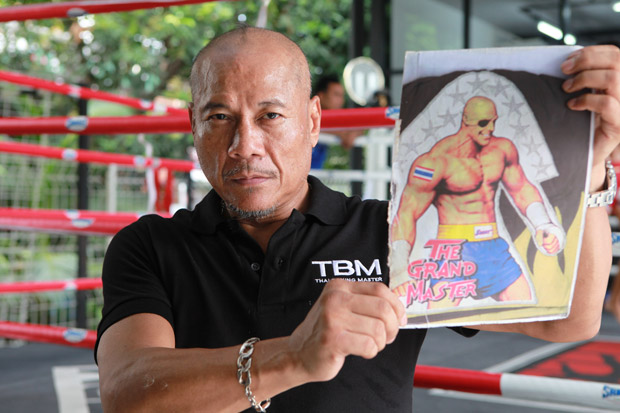 WARRIOR: Sagat displays the ‘Street Fighter’ video game villain thought to be a clone of him from in his boxing heyday in the ’90s. Right, on the cover of Thai boxing magazines. Below, at 58 years of age, he is fit and still trains at the Petchyindee Gym.

Sagat was born Wirun Phonphimai in 1958 in the town of Phimai, Nakhon Ratchasima. The seventh of 10 children, all male members of his family were famed muay Thai exponents in the area, starting with grandfather Suk Prasathin Phimai, who has a statue honouring his fighting exploits.

Suk passed on his strength and techniques to his family. Sagat says he was introduced to muay Thai when he was 11 by one of his brothers. After training for six months, Sagat had his first fight at a temple fair. He won, and along with the adrenalin rush and joy, he earned a small purse.

His reputation as being "unbeatable" grew as he fought 20 times in his home town without loss.

When he was 16, Boonyeam Sophon, the owner of Porntawee boxing camp in Nonthaburi, went to watch him fight. After he won, Boonyeam approached him and asked the teenager's uncle for permission to take Sagat to Bangkok.

"I will make you a star," Sagat recalls Boonyeam promising him. Sagat hopped on the van heading to Bangkok hoping he would keep his promise. 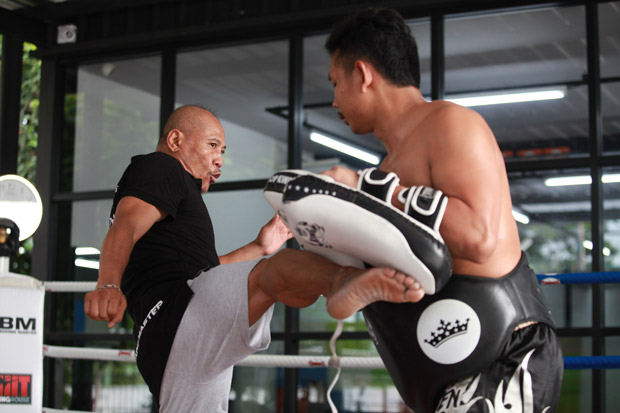 From fighting on local stages in temple fairs, Sagat was now part of something more serious. He told Spectrum it was like moving from high school to university, as the training grew much more intense. He eventually joined the Petchyindee gym, from which he took his fighting name. "I had nothing but my instincts when I fought in Phimai, but when I joined the proper boxing camp, they taught me a lot of theory that I never knew before," Sagat said.

His first fight was at Ratchadamnoen stadium. He lost, but returned to the gym to train harder, knowing his raw ability would no longer be enough to overcome tougher opponents. He earned 800 baht for each bout.

Within two years, he improved to the point where he won five fights in a row. When Ratchadamnoen held its first full tournament, he won the bantamweight belt. Sagat also tried his hand at Western-style boxing with success. In 1986, he won the lightweight division of the Association of Boxing Commissions. He also won the same division of the Oriental and Pacific Boxing Federation (OPBF) in 1986 and 1987.

A TASTE OF DEFEAT

But along the way, Sagat also tasted what it felt like to lose. In 1978, having fought just two bouts of sanctioned Western-style boxing, Sagat was given a top 10 ranking and the chance to fight Puerto Rican Wilfredo "Bazooka" Gomez for the World Boxing Council crown. The fight was staged in Korat and drew 40,000 fans, but the inexperienced Sagat was knocked out in the third round. He later relinquished his OPBF lightweight title to a South Korean boxer, Park Bong-chun, in 1989.

He also started to experience losses in muay Thai, a sport he had mastered. After turning 25, Sagat says he lost nine fights in a row and believed his career was coming to an end. He sought the advice of many monks as he believed he was "cursed" by black magic.

He decided to go back home to Nakhon Ratchasima, where he visited Luang Poh Khun, a famous monk from Wat Banrai, who gave him words of wisdom he still remembers today. "Don't be infatuated with fame when you are rising, and don't give up when you fall," Luang Poh Khun told Sagat.

After he regained his confidence, Sagat returned to fighting and found his new weapon: an uppercut. He earned a reputation as the knockout king and, after winning seven more titles, retired from fighting in Thailand when he was 28.

His overall fight record in all disciplines is 317 bouts, 266 wins, 40 losses and 11 draws, according to the online Siam Fight Mag. More than 150 wins were by knockout.

Sagat was both muay Thai and kickboxing world champion and won the Lumpini championship three times. In boxing, he was world champion across three associations, with a professional record of 14 fights and 12 wins. A renowned innovator, he is credited with introducing several crucial methods deployed in Mixed Martial Arts. His skills also brought wealth, regularly fighting for purses of 450,000 baht in Thailand and US$25,000 overseas.

No longer interested in gaining fame for himself as a boxer, Sagat began entertaining offers from gyms around the world hoping to bring him on board as a trainer.

He eventually took a job in Australia, where he spent a year passing on his experience to younger boxers.

He was also asked once to enter a boxing match representing Australia under the condition that if he won, he would get to raise the Thai flag. He won.

Sagat then moved to Japan, where he already had a reputation as a strong and fierce fighter, to teach at a gym in Osaka.

Then in 1994, the release of Street Fighter helped bolster his claim to fame. The game featured a boss character named Sagat, depicted as the "Emperor of Muay Thai" and renowned for his incredible power.

While Capcom, the game's developer, has never come out and officially confirmed it, it is widely believed that the character was based on the real-life Sagat.

The company never contacted Sagat asking to use his likeness, nor did he receive any direct financial benefit. Sagat said he considered suing Capcom, but eventually decided against it after considering the time and money the lawsuit would have required.

But Sagat has still managed to use the game to his advantage as a tool for self-promotion -- he isn't shy about telling strangers that he's a Street Fighter character.

He used that name recognition to land jobs in Italy and America as a trainer, travelling under the name "Sagat Thailand" to reinforce his Street Fighter credentials.

DOWN BUT NOT OUT

The fame and money Sagat earned from his boxing career meant he could have retired without ever working another day. But it was around this time he lost the biggest fight of his life: drug addiction.

Sagat was first arrested for drug abuse in 2002. A second arrest two years later would lead to prison time.

He struggled to kick his habit though, and was arrested again for distributing drugs in 2009, and sent back to prison for five years.

Sagat refused to talk directly about his battle with drug addiction, preferring to focus on his stellar fighting record.

But he made it clear that he is a fighter by nature. He sometimes falls down, but always finds a way to pick himself up again.

After his drug convictions, Sagat received support from many figures in the boxing community, and was given work as a boxing trainer at several fitness centres and eventually at the Sek Loso boxing camp.

The opportunities to train other people helped Sagat get his life back on track. Even during the time he was in prison, he kept himself fit and trained other inmates.

"Instead of sitting at home and accepting the fact that I am an old man, I want to show that people have to fight their way back up when they go down," Sagat said.

He is now based at the Thai Boxing Master gym in Bangkok, where he trains rising young fighters.

"One of the most important lessons I want to give to all young boxers is not to be overly confident, because fame doesn't last forever," Sagat said.

"It is also important to save the money you earn and not to spend it foolishly.

"The only thing more difficult than winning a championship is defending one." 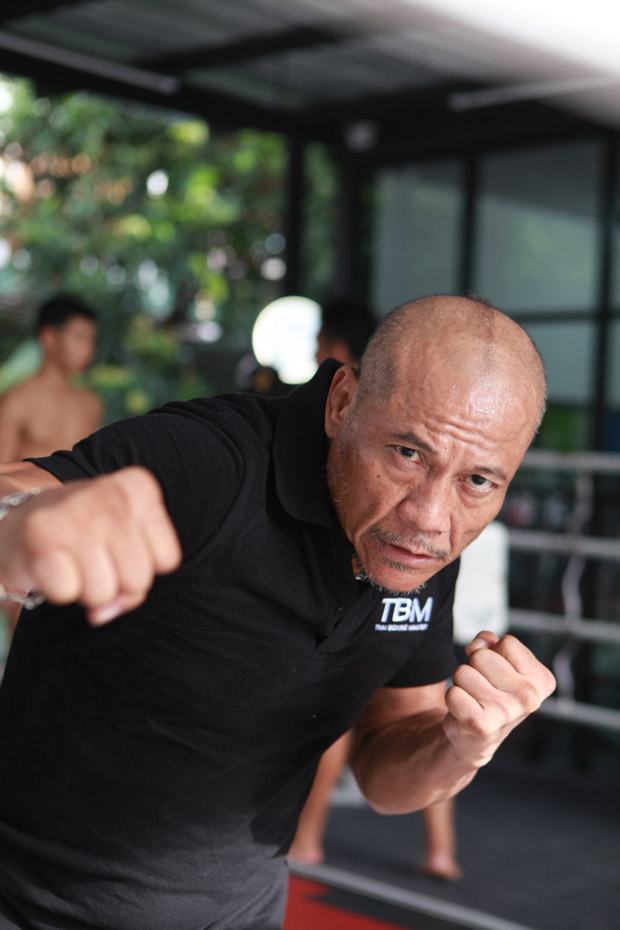