Karoon Jeamviriyasatean's map is an intricate bird's-eye view of Rattanakosin Island, best appreciated through a magnifying glass. Life spoke to the artist about his miniature masterpiece

Now more than ever, locals and tourists alike are flocking to Rattanakosin Island. The Grand Palace, due to the tragic occasion of the His Majesty King Bhumibol's passing, is functioning again and over the past 10 days has become the emotional centre of the whole country.

To record the beauty of Rattanakosin Island, known simply as the "Old Town", freelance artist Karoon Jeamviriyasatean has drawn a map. But it isn't any normal map. It is a stunning and intricately detailed architectural birds-eye-view cityscape of Rattanakosin Island. Every block, shophouse, fort, temple and soi is depicted, and the only way to see it in full detail is through a magnifying glass.

With its inconsistent urban design, Bangkok is a difficult city to illustrate. There have been maps created by various illustrators and artists before, but most are not at the level of detail as Karoon's cityscapes. His works, more than anything, are reminiscent of British architectural artist Stephen Wiltshire's cityscapes.

The 29-year-old artist graduated from the Faculty of Decorative Arts at Silpakorn University, but his love of drawing started at the ripe old age of four. With a keen eye, he taught himself how to do perspective drawings of his interests like trains and small communities. As time passed, these eventually turned into intricate maps that he's well known for now.

Life spoke to Karoon about his works and what he plans to do in the future.

When did your Thai cityscape project start?

I just started drawing them late last year. A hotel commissioned me to draw a map of Luang Prabang. So I created a bird's-eye-view drawing of the city. Then I felt that I should try making a map of Bangkok.

Probably Wat Phra Kaeo. It's the heart of the island.

The full name of Wat Phra Kaeo is Wat Phra Si Rattana Satsadaram. It's an area that is a graceful recording of history since the Rattanakosin era. It was built at the same time as the founding of Rattanakosin Island. It's a temple that's priceless. Inside is made up of the [Royal] Court. It's also a palace for the monarchy as well. It has importance in terms of Thai architecture with a mixture of Western architecture in some parts. So there's a huge importance in the spirit of history and architecture, which is the heart of Rattanakosin Island. It's one of the grandest and most graceful buildings in the world.

How has Rattanakosin Island changed since its conception? 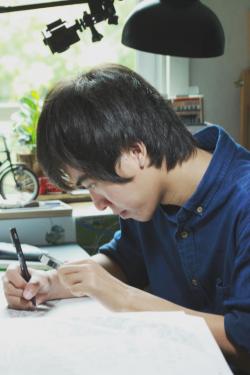 There were 13 forts like Pom Prakan, but some of them have been demolished. There was also the Sala Chalerm Thai Cinema -- that was demolished as well. The roads are generally the same. It's generally the same urban design since the era of King Rama I when he designed the urban plan.

It probably has to do with creativity, and building on original maps to become newer, interesting, and to have more dimensions. Normal maps are flat images and one-dimensional, so I adjusted mine to become three-dimensional. There are gimmicks that make it more fun as well, and I get to go out and survey the area -- documenting the actual atmosphere and its charm in order to put into the map. I collect these small details for the illustration to have more charm. For me, it's a mix of architecture and art, so it comes out as something new.

How difficult is it to create a map?

You have to research the routes. You have to love both drawing and researching and surveying. It uses quite a lot of energy to create a piece. The Rattanakosin Island piece took three months to draw. I feel like there has to be a certain level of skill to do it. You have to understand perspective quite well.

There are also tiny areas where I have to use the magnifying glass to draw. I don't often use it because my eyes start to hurt. I only use it on areas where it's necessary, like in the chedis or the pinnacles on temples. These are very delicate and I can't make mistakes there.

What problems did you find concerning Bangkok's urban design whilst surveying?

The urban design of each place isn't very beautiful [chuckles]. There's a lot of self built roads. When I draw I have to organise the houses in a more orderly fashion. I have to set the space and layout to be more beautiful.

How do you get all of the detail in your work?

I look at Google Maps for help and take photos of different corners for reference. The fact that I put in a lot of detail shows that I care. It's for the illustration to be more lively. Additionally, when I draw it's not on a one-to-one scale, but it's more like scales of miniature toys, which draws in people to be more interested in the work.

What's your process when drawing the maps?

I very lightly trace [with a pencil] to have a basic guide. I've never studied perspective drawing anywhere. It's like I've practised it by myself since I was young. It comes from noticing things. So I adjusted my skills until I was able to draw without having to draw guidelines or anything. I feel that later on I've used my senses more and I can just draw it right away. If I had to draw with guidelines it would probably take much longer.

What's the hardest part in creating these drawings?

For me it's probably the paper size. Because scanners can only scan paper sized A0, if I draw a gigantic map, I won't be able to find a place to scan it. So I have to draw on separate sheets and connect them together. That's one of the harder parts about this -- making it into a digital file. I have to keep researching about this because I'm starting to create bigger works. Before it was A2, A3, but now it's A1 and 1m-long paper.

What cities are you working on now?

I just finished Rattanakosin Island and now I'm doing the Thonburi side. I'll continue doing other zones. There's plans to do Ayutthaya and other provinces as well. I've been thinking of creating a modern and historical map of Ayutthaya -- before we lose the city. I would have to do a lot of homework and go to a lot of museums for that. Right now I've paused the Thonburi map because I'm working on something with a museum in Udon Thani.

What are your plans for the future with these maps?

I talked to my friends saying that there should be a mobile application for travelling with these maps. The important places might be blown up in scale, etc. I'll continue drawing maps for each of the provinces, and find people to create an application, because I'm not very knowledgeable with IT. 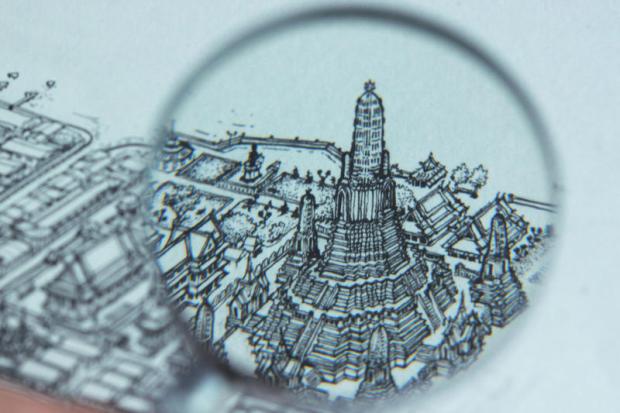