A Thai independent film, Dao Khanong (By The Time It Gets Dark), won Best Picture at the 26th Subannahongsa Awards on Sunday night, a surprise victory for a title that had only limited release and was largely unseen by multiplex-goers.

The film also won Best Director for Anocha Suwichakornpong, who became the first female filmmaker to be honoured with the prize, and Best Editing for Lee Chatamethekool and Machima Ungsriwong.

By the Time It Gets Dark is a rich puzzle that touches on the protest of Oct 6, 1976, the meaning of storytelling, and perhaps the idea of cinema itself. The narrative is about a filmmaker, likely a stand-in for the director, trying to make a film before the story reveals hidden layers inside. In her speech, Anocha thanked her crew and family, and said the freedom to think and to act are the foundation that allowed her to make the winning film. 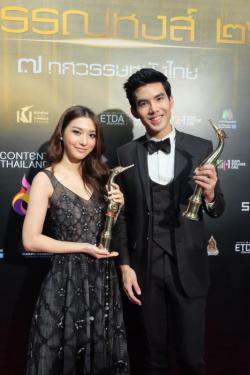 The Subannahongsa win can be interpreted as a courageous decision by the voters -- several hundred professionals in the film industry -- who favoured the ruminative arthouse film over more commercial fare. Considered the Thai Oscars, the Subannahongsa Awards in the past used the jury system before switching to online ballots three years ago.

Other awards are spread out among studio and non-studio films. The two lead actors from the romantic comedy hit Fan Day snatched both acting prizes: the competitive Best Actress category saw newcomer Nittha Jirayungyurn winning, while Chantavich Thanasewee won Best Actor. The film made over 100 million baht at the box office and cemented the reputation of GDH 559 as a reliable hit-maker.

The Best Supporting Actress prize went to veteran Penpak Sirikul from her role as a lovesick housewife in A Gas Station, another independent production. Tanwarin Sukkhapisit also won Best Screenplay for the film. Another independent film, Tudongkhawat (Wandering), about a man who finds solace in monkhood, won Best Cinematography for Uruphong Raksasat, who has won the same award twice before.