published : 24 Jun 2017 at 04:00
newspaper section: Muse
writer: Parisa Pichitmarn
Egg is a custard pudding that customers can choose as an appetiser. Photos by Pornprom Satrabhaya

Could you imagine a time when Bangkok was not flooded by dessert cafés, and when parfaits were considered revolutionary? For a moment when you'd be hard-pressed to find a dessert destination that served anything besides ice cream, you'd have to take a time machine and go back 10 years -- to before Kacha Bros came along to dot our landscape with parfait café Sfree and roll-cake authority Kyo Roll En.

Today, sweet-tooths can easily get a taste of confectioneries from the Land of the Rising Sun at whatever mall they visit, but the brothers behind these ubiquitous chains are now also offering beautifully plated courses like the ones available at Michelin-starred establishments at Kyo Bar -- and all within a 400 baht budget.

The media-averse brother masterminding this venture, chef Dej Kewkacha, is behind all the operations and menu creations. He's proud to finally come out into the limelight to talk about his latest brainchild -- clearly a product of his own experience with star-collecting at the best restaurants around the world with his older brother, Litti, who looks over the PR and marketing for their Kacha Bros empire.

"Thai people who like beautiful desserts don't have to go to Michelin restaurants to wait for that nice last dish anymore. They can just come here," says the 32-year-old. "I want to educate Thais that desserts have come this far, and that eating is not only about good taste; it's also about taking things in visually, talking to the chefs and understanding the philosophy behind each dish." 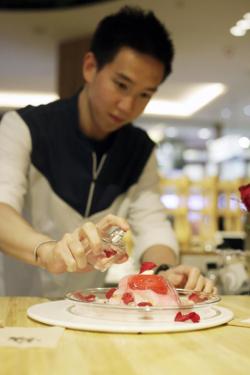 Besides highly conceptual combinations of miso and chocolate, or what literally looks like a Zen garden on a plate at this high-end extension of Kyo Roll En, Dej has long offered various sweets from other lands to the Thai masses, while striving to maintain their authenticity, be it the parfaits, granitas, charcoal bamboo cakes or fancy-looking eclairs.

His disposition towards Japan dates back to going to the island-nation at least five times a year since he was a child.

"I probably liked their desserts since I was young because my father did a lot of business with the Japanese and I would go with him," he says. "I've absorbed their culture since then and grew up abroad too so I'm not that in touch with my Thai side. I liked their culture and could speak the language, too, so I wanted to do something I was good at and familiar with."

What's impressive about Dej's mass-produced sweets is that they stem from his lack of experience in the culinary world. The heir to Safari World had been groomed to eventually help out with the family business, after obtaining a bachelor's in maths and statistics during university and a master's in tourism. Yet he and his brothers also wanted to create something of their own that was born out of something they loved.

With a favourite pastime that revolved around eating and an obvious lack of non-ice-cream cafés in the Thai market back then, their home-grown parfait brand, Sfree, was born. A Japanese chef the brothers had met would eventually become their consultant for their first brand, with Dej being tasked with tailing the chef to understand the logistics of the factory and cooking, while his elder brothers looked over marketing and finances.

"When studying abroad, I was the one responsible for cooking for my brothers anyway," he recalls. "As I had to enter the kitchen more to understand more, I started to like sweet desserts even more."

Refusing to go to cooking school for fear of coming out too cookie-cut, Dej is mostly self-taught, his creations a mishmash of his own tinkerings in the kitchen. While he tries to stay true to the Japanese origins by extensively studying how they are made right at the source, there's also room to give a more Thai flair to his baked goods, such as the mango-flavoured roll cake at Kyo Roll En.

About maintaining that delicate balance of business, authenticity and offering something Thais like, he explains: "It's about, 'How can we develop this in our own way?'. We found charcoal bamboo very interesting and no one used it here. The Japanese have been eating it for a long time, for over a thousand years, and we wanted to develop that into our desserts somehow because it's good for your health, too. We tried injecting it into our soft cream and roll cake and it took off much faster than when Sfree first started." 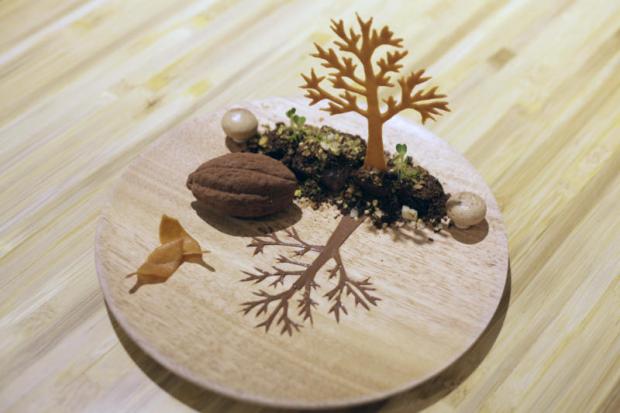 Cacao Story is inspired by a cacao farm Dej once visited, where he discovered that intense sunlight is needed for the growth of trees and that mushrooms grow everywhere around them.

At Kyo Bar however, there are no rules, and it is the most whimsical of Dej's imaginings that you get to taste. His planning process is reversed as he first thinks of a picture he wants to re-create, such as the cacao farm he has visited, before he starts to think of the ingredients that will help him achieve the right colours and tastes. Some items are not only a wondrous sight but are also delightful for the palate.

With Onsen creating the feeling and very sounds of the hot springs through the use of melted dry ice, all senses are engulfed when it comes to a visit to this experience-heavy bar. With an aversion to social media, Dej does not make creations that are beautiful just for the sake of Instagram. He laughs at the thought of his older brother still taking photos of their tasting courses at fine-dining restaurants around the world when he has already emptied his plate.

"I don't want to see what others are doing because I'm afraid of getting influenced and falling into trends," he explains. "When we're abroad and out eating, I really go to just enjoy it." 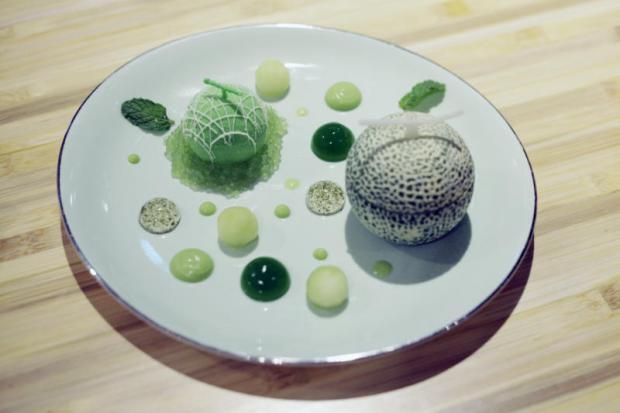 Pantone is a refreshing mix of mojito, pandan and melon, which also follows this year's green colour scheme.

To try delicacies abroad is a way of blowing off steam that never gets old for Dej, who still travels to Japan five times a year. It's also his way of learning, as he gets to rub shoulders with other renowned players such as Hidemi Sugino, who was named best pastry chef by Asia's Best 50 Restaurants in 2015, for his delectable mousse cakes so temperature-sensitive that no home takeaways are allowed.

"When I met him in Thailand, he invited me to his factory and I was told that I was the first foreigner he has ever let into his kitchen. He didn't even let Litti in because he wasn't the one who cooked, so my brother had to take photos from outside! I didn't study all this, so I'm always curious about how people run their kitchens or want to know where those stars came from."

Recalling a not-so-pleasant memory of eating a sweet balloon as one of the fine-dining courses while in America, Dej shakes his head at the gimmicky tactic that did not illustrate a deeper core to the dish. 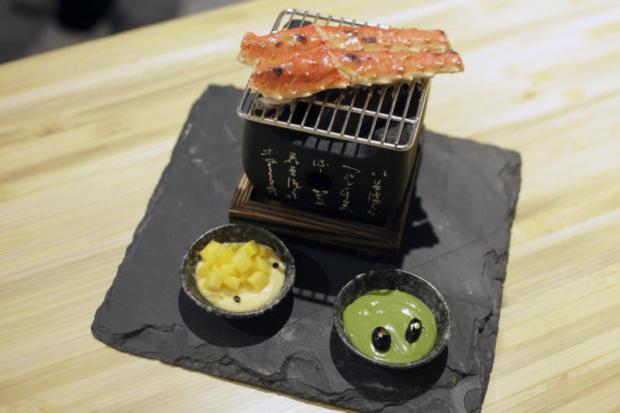 BBQ is an appetiser course in which the coal shells are edible meringue.

"They didn't really pull it off, with everyone running to the bathroom because it was sticky all over our hands. It was too concept-heavy and even stuck to a woman's hair! I definitely see a lot of wow plating techniques, and it can be as pretty as you want, but it has to get what you are across, too."

With Kyo Bar managing to convey its Japanese quality with each course served, it is no surprise that even globally acclaimed chefs who visit ask to reference his creations for their own restaurants back in Europe. Dej is keen to share, and wants Kyo Bar to be a place that raises the bar regarding what Thais can achieve and for people to exchange ideas regarding confectioneries.

"It's hard if you don't innovate and do your own thing," he says of the local dessert scene. "That way you'll always be followers. There have already been Chinese and Japanese businesses who contacted us to open Kyo Roll En in Japan. Imagine, a Japanese brand made by Thai people to be opened in Japan! Why import brands when you can do it, too?" 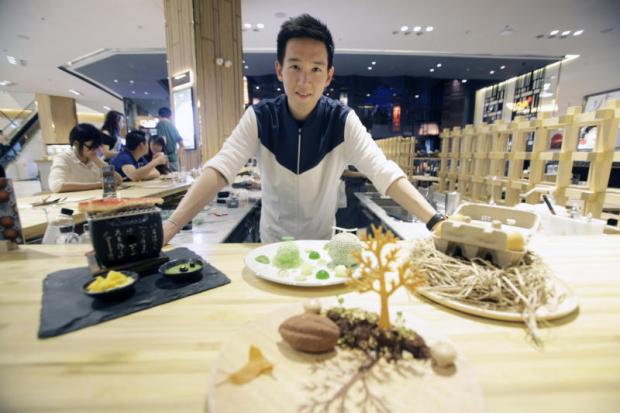