Exotic eats, and where to find them
Life
Social & Lifestyle

Exotic eats, and where to find them

An exploration of the lesser known cuisines

At the heart of every culture is food. The smells, tastes and textures are deeply rooted in the chronology of our heritage. Living in Bangkok, we are fortunate to be a home for countless cultures, cuisines and kitchens. How far off the grid can you go to satisfy your culinary curiosities? This week, Guru took a look at some pretty far out places. Here are some exotic eats, and where to find them!

Home to a rich history and beautiful nature, it only makes sense that Lebanese cuisine casts a vivid reflection of its land. If you wish to pair an adventurous culinary excursion with a proper dining experience, then Nadimos Lebanese Restaurant is an excellent choice. Here you will find a selection of Lebanon's most traditional and authentic dishes, served with friendliness and flare. Start with the Tabbouleh (B140), freshly chopped parsley and tomatoes, ripe with a citrusy flavour, eaten with celery leaves. The Hummus (B140) is prepared fresh upon ordering. It is smooth, tantalising, and as silky as it gets. Dipping with pita becomes addictive. For the big guns, go with the Mix grill (B350) to get a real feel for how Lebanon does skewers. The best things come in threes, so enjoy the tender and juicy chicken, lamb, and kafta, traditionally made from minced lamb or beef and tossed with a wealth of spices. As soon as it hits the grill, it is tantalisingly aromatic in smell, and once it hits your mouth, prepare for a world of succulence and quality. Everyone from the customers to the wait staff are lively. 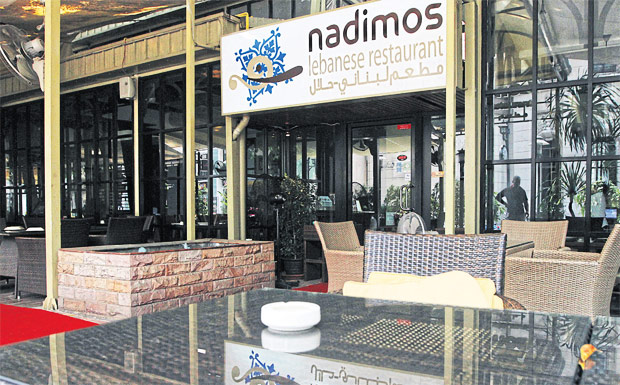 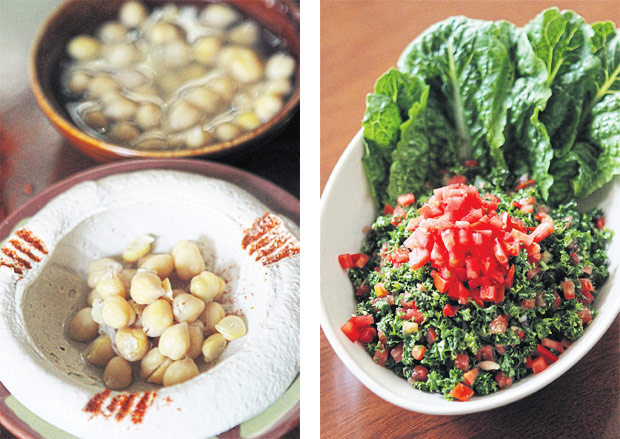 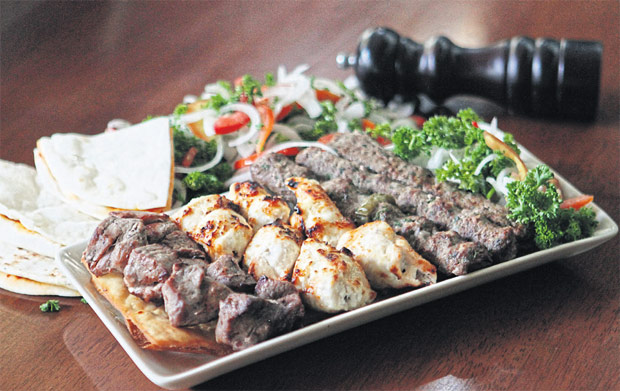 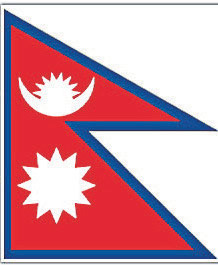 Himalaya is tucked away on Soi 31, hidden amidst a mountain range of high rise hotels and office buildings. Hundreds of prayer flags cascade down across the entrance and upon entering it feels like you've reached a journey's end. But it's just begun. Nepalese food has Indian-esque elements but being so far above sea level, it incorporates a different variety of native grains and barley that they infuse into the diet. Although a staple throughout the subcontinent, Nepalese cuisine has laid claim to the lentil soup called dal which is the country's most popular dish. For a full and convenient Himalaya experience, order the Kathmandu set dish. It comes in five varieties, but to keep it traditional, go with a Chicken thali set (B230). It is served on a massive platter with rice, surrounded with three small bowls of chicken thali (swimming in a mild curry), dal soup and saag, which is stir-fried spinach. On the side, go for some Mo-mo (B90-B150), which is a Tibetan style dumpling, usually stuffed with vegetables or meat and served with a spicy tomato based dipping sauce. Although closely tied to India, the taste of Nepal stands on its own. Enjoy the atmosphere inside Himalaya; it's very laid-back. It's colourful and loaded with beautiful Nepalese and Tibetan decorations. The staff are all Nepalese and excited to make you feel at home. 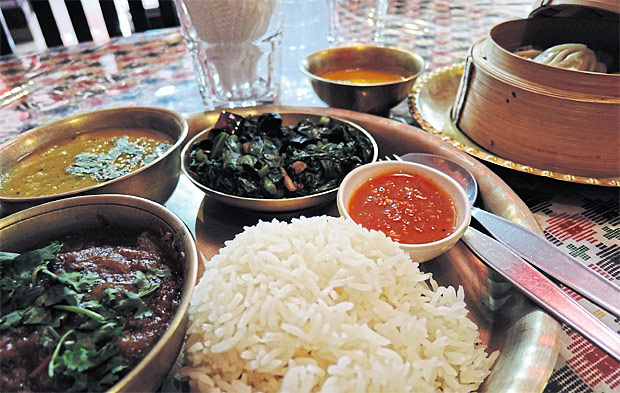 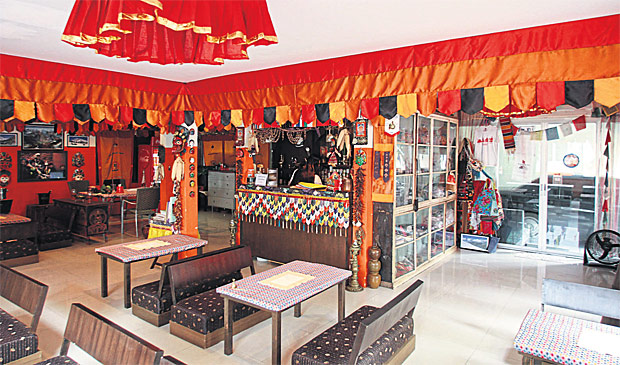 For a refined and luxurious Greek dining experience, head to Avra Greek Restaurant on Soi 33. Look for bright white walls and light blue, peeking out beneath vines and foliage. A step inside will reveal an even more Mediterranean feel. It's clean and bright, complete with lightly tinted brick, hanging pottery, and stalks of native wheat. Restaurant owners Alexandros Avramidis and his wife Anna, are natives of Thessaloniki in Northern Greece, however the restaurant explores all regions. Bi-annually, the family brings in a chef from a different part of Greece to revamp the menu with new traditional flavours and textures. Right now, opt for the Variety of dips (B270) to start. With a side of pita bread, choose from six different homemade dips, including the delightfully fresh and tasty tzatziki. Moving deeper into the culinary hallmarks of Greece, look for the Mousakas (B430). Imagine lasagne but bolder. Subtract the sheets of noodles and replace them with minced beef, potatoes, eggplant and zucchini lathered in creamy sauce and feta. Finally take a jab at the Mix grill (B1,520). A variety of grilled meat opens a window to allow a glimpse into a barbecue, Greek style. Greek style chicken kebab, beef soutzoukakia, Greek pork sausages, pork on a spit and lamb chops are all served sizzling hot on a platter big enough to feed two. This, is, Avra! 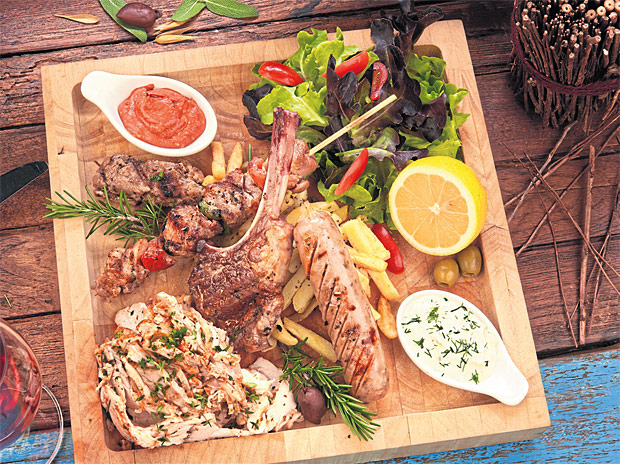 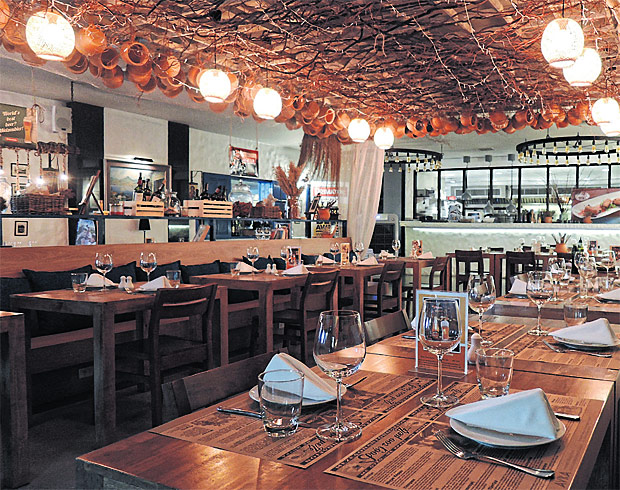 Not many people are familiar with Yemen and even less so with Yemeni food. Capping the southern tip of the Arabian Peninsula, this is a country with deep tribal roots, built upon centuries of trade, nomadic warfare and the necessity of movement. The terrain, climate and history are rugged, but this is not reflected in the cuisine. We headed to Hadramaut Al-Yemen Restaurant. The flagship dish would have to be the Mutton mandi (B500), although the chicken variety is equally common. Mandi dishes are cooked in a tandoor, which is an underground earthen oven, packed with wood and buried with hot coals. As the coal burns, it traps the heat, allowing for extreme temperatures, and ultimate tenderness. The mutton is served atop a dome of biryani rice and sided with a spicy dipping sauce. It also comes with a side of Malawach, the traditional Yemeni bread substitute which is like a giant naan, tortilla or pancake made with layers of a flaky, garlic puff pastry. Eat with your hands and order sides of Hummus (B120), or Fatus (B120) and Arabian salad (B90), with the latter made with a mix of freshly cut and heavily seasoned veggies and tomato. Find the fully halal, Hadramaut Al Yemeni on Sukhumvit Soi 3, 100m in, on your left. Look for bright blue fish tanks, you can't miss it. 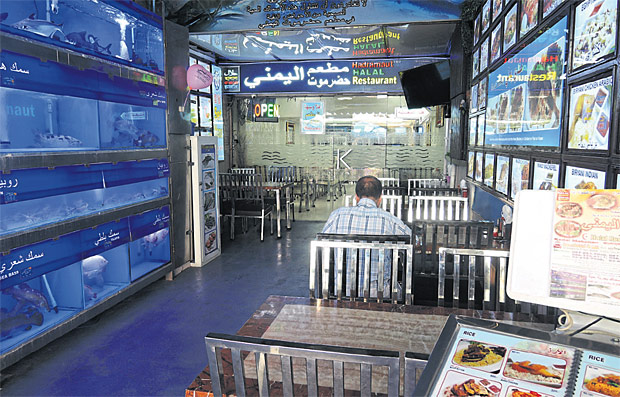 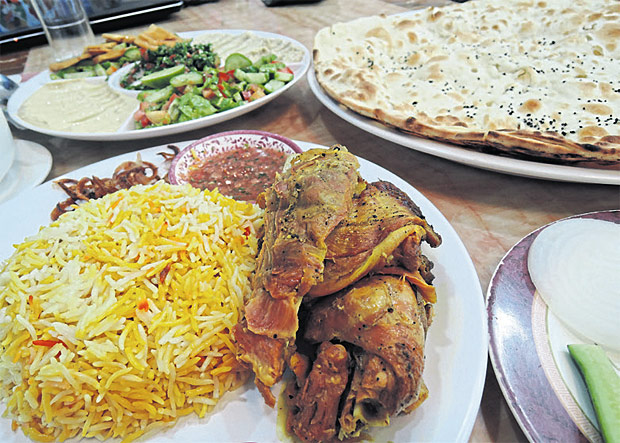 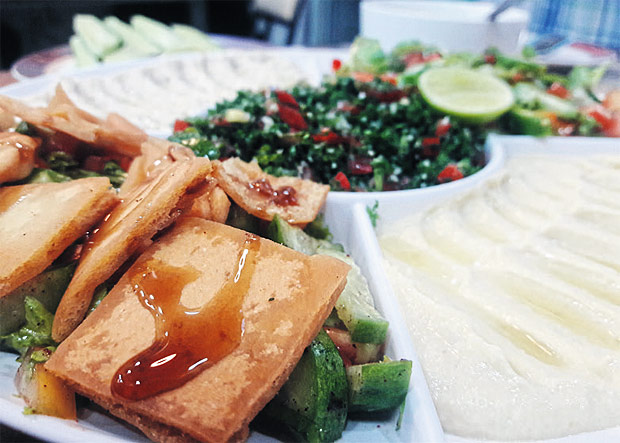 Home of the smorgasbord, Sweden is known for a rainbow of flavours and textures. Amidst the cold winters and temperate summers, Swedes have found solace in their icy sub arctic waters, rich with a diversity of marine life and eats. Cajutan is Bangkok's answer for a quick escape to the Nordic. 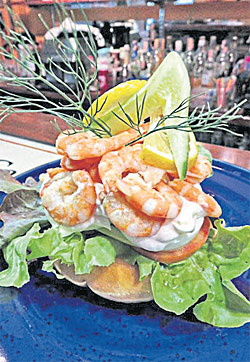 Find Swedish cuisine here every day of the week but on Saturdays, stop by for the Smorgasbord (B695) for the complete Swedish dining experience. Five varieties of herring, smoked salmon, smooth and salty lox, prinskorv (small swedish sausages), spare ribs, and of course, delectable homemade Swedish meatballs, (and that's just the first plate)! The full spread is a buffet in both essence and options. Go back to the smorgasbord for as many servings as your stomach allows. On plate two, try the Janssons Frestelse, a national favourite, made from a traditional mix of seafood and veggies baked into a delicious casserole. There are hot plate items and a tonne of cold plate selections which mostly consist of seafood and sides such as the skagen, which is a thick coleslaw like paste but richer with shrimp and lemony-dill tones. Great on sourdough bread, it's brisk and the flavour packs both zip and zing. For dessert, make room for the freshly made cinnamon rolls. Cajutan is a bright and colourful restaurant, with a warm and authentic maritime feel. Find it on Sukhumvit Soi 18, just a few seconds ride from the main road. 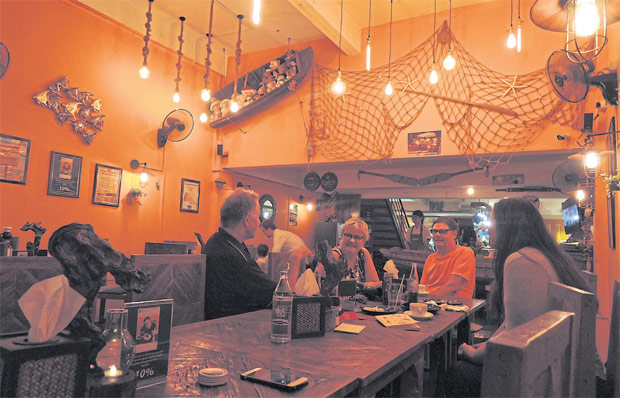 Lying in close proximity to the Arabian Peninsula, with tributaries leading into the Nile, Ethiopia has historically been a place for Arabic influences to merge seamlessly with North and East African cultures. Emerging from history is a nation serving up cuisine that is simply unique in every single way. Find the quietest and kindest variety at The Ethiopian Restaurant, adjacent to Soi 3, behind Nana Square. Bright with handmade decorations, it's pleasant and comfortable and there is a distinct smell of Ethiopian coffee. For the full experience, make sure to wash your hands before eating, you won't be using knives and forks. Traditionally, Ethiopian food consists of many spicy meat dishes (called tibs), or spicy vegetable mixes, cooked to a stew (called wot) and then dished out piping hot onto injera, a homemade sourdough flatbread made from fermented teff, a grain native to Ethiopia. It's soft and rubbery texture makes it easy to peel strips which you then pick up chunks of meat or vegetables with. Try the Kay wot (B300) which is lean beef, or Doro wot (B350) which is made from tender chicken leg, heavily sautéed in a shower of spices. The key ingredient in Ethiopian cuisine is a spice mixture called berbere. Explore this taste the best with the Ethiopian meat combo (B450), which included wot, lamb and gomen (collard greens), shiro (a chickpea and bean based stew) and ayeb (cottage cheese). To finish it off go for some traditionally brewed coffee, served just like it is in Ethiopia. Warning though, it is strong! 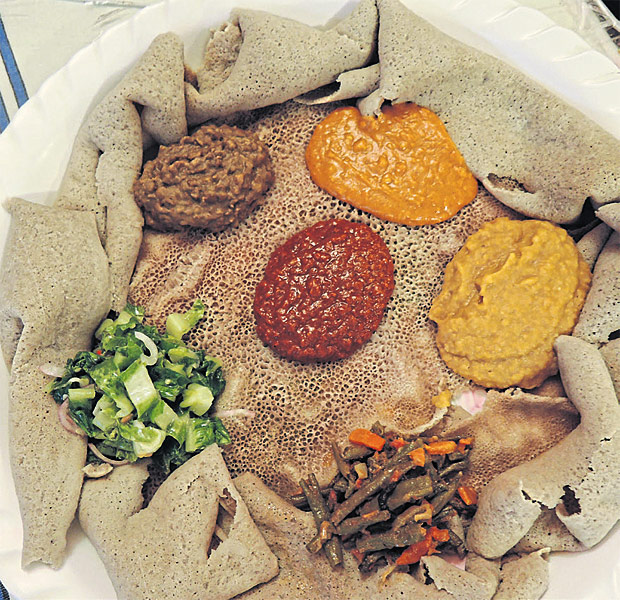 Bangkok is home to many Turkish restaurants, but our culinary compass pointed us towards Ottoman Turkish Restaurant off Silom Road for a fully authentic experience. The fully halal kitchen was busy preparing for the after work rush when we visited. Find the chefs at the back of the house cheerfully conversing in Turkish, baking away piles of Lahmacun (B100); a homemade flat bread, covered in lamb and tomato sauce and cooked to a crisp for a few minutes in the oven. Among the bestsellers are the most traditional; the Kuzu tandir (B500) is a roasted lamb, served with a medley of veggies and Turkish pita bread, along with the Iskender kebab (B350), a yoghurt marinated kebab with ground lamb, served with Turkish pita and yoghurt tomato sauce. 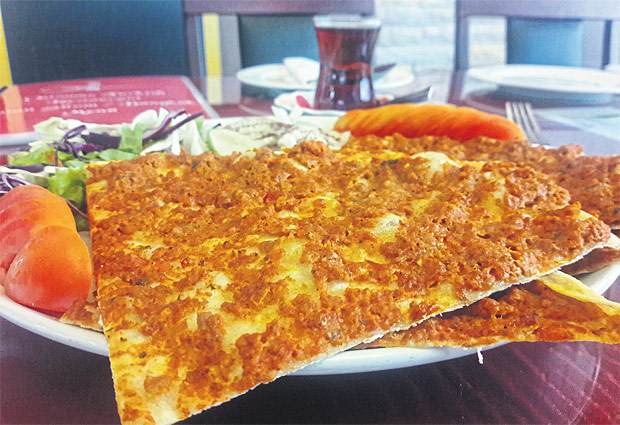