The restoration work at the royal temple, Wat Suthat Thepwararam, seeks to restore the murals lining the walls of the prayer hall to their original grandeur

Alongkorn Thiamjun holds a small paintbrush in his right hand and rests it on a support stick. Fastidiously he dips colours onto a vast mural in the prayer hall of Wat Suthat Thepwararam, a royal temple near the iconic Giant Swing. Originally painted in the 1840s during the reign of King Rama III, the murals at Wat Suthat are the largest in the country, and they depict expansive and mystical legends with unrivalled exquisiteness.

An artist in the Office of Archaeology of the Fine Arts Department, Alongkorn is also in charge of the mural restoration project. This is the latest conservation effort of the two-century-old wall paintings after the last restoration had been done 36 years ago.

"We found an advanced state of deterioration, especially from the lower part when we inspected the paintings in 2016," he said. Some pieces of those murals had already been lost while other parts were detached from the wall.

"If nothing is done, there would be a high risk that this invaluable heritage would be gone forever," he said.

Wat Suthat was built in 1807 during the reign of King Rama I. The prayer hall was built to house the Phra Srisakayamuni Buddha image, a large bronze Buddha sculpture from the ancient Wat Maha That Temple in Sukhothai province. The king passed away two years after the construction had started, and the work was carried on by King Rama II.

But the temple was not completed until 1847 during the reign of King Rama III, who named it Wat Suthat Thepwararam. New buildings also were built during the period including the phra ubosot (ordination hall), sala kanparian (a sermon hall) and monks' quarters. In 1950, King Rama VIII's relics were housed in the prayer hall under the Phra Srisakayamuni Buddha image. Today the temple is one of six most important royal temples in the country.

Wat Suthat underwent renovations from time to time. The grand restoration took place in 1982 as part of the celebration marking the 200th anniversary of the founding of Bangkok. The project was funded by the German government and was completed in 1985.

In 2016, the conservation team of the Office of Archaeology of Fine Arts Department found damage on the murals of the phra vihan (prayer hall). The department set aside a budget of 14 million baht for the three-year renovation project, started last year and is scheduled to finish in 2019.

The wall as canvas 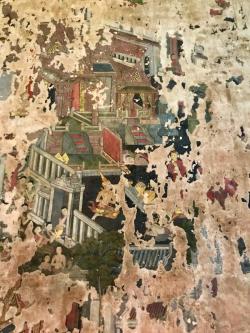 Some parts of the murals can't be repainted. pHOTO: Karnjana Karnjanatawe

According to records of the department, the murals were painted during the reign of King Rama III. Covering the interior walls on all sides, they portray a series of Buddhist and Hindu tales that represent the foundation of the Siamese faith.

In uninterrupted swirls of colour, dimension and montage, the paintings recount the life of Lord Buddha in vibrant colours, as well as chapters from the Ramayana, which can be found around the four doors. Around the 26 windows, visitors can find 13 stories based on classic literature, while the pictures depicting dhamma teachings were painted on the eight pillars inside the hall.

The murals, which basically take up the entire hall, start from 1m off the ground and rise to the ceiling, which is at about 30m in height. When combined with murals on every side of the eight pillars, the total painted area is around 2,129m².

"This is the largest mural area inside a prayer hall in the Kingdom," said Alongkorn.

Devoted artists of yore had perfected the technique that ensures the lasting of the mural montage. The traditional process began with artists coating the walls with a mixture of quicklime. The wall must be free from the base in order for the colour to attain full vibrancy. The base was washed away by a cleansing with boiled water of cassod tree leaves, then a piece of turmeric was rubbed on the wall for it's a natural yellow hue -- and not the red-brick colour.

The last step was to apply a mixture of boiled white clay, or din so pong, and glue from tamarind seeds on the surface and scrub it until smooth. These steps made the walls like sturdy drawing paper ready to take ink.

Those inks were made of a mixture of glue and watercolours. Natural ingredients give off natural colours, such as red from ground laterite stone or clay, yellow from gamboge and black from soot on the inner side of a clay pot.

When it was time to paint, skilful artists of the 1800s did not draw outlines. They applied colours directly on the walls. 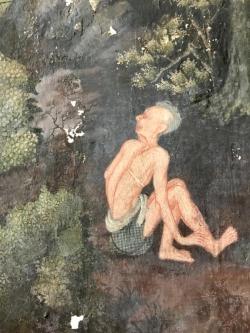 As time passes the colours are blanched. The murals also are dirty, while some parts are peeling, have disappeared or have delaminated from the surface due to moisture, pollution and from being touched, said Fine Arts Department director-general Anandha Chuchoti.

"Wear and tear is clearly shown on lower parts of the walls and the pillars although major parts of the murals are still in original condition. The restoration work is needed immediately," he said.

The preservation began last year when a team of 10 artists documented the deterioration. The team took pictures of the areas that needed to be fixed. They drew the pictures on papers and marked the damage on the drawn images.

The team cleansed all dirt off the surface by covering sa paper on the wall and gently applying distilled water that was mixed with a little bit of either ammonium carbonate or ethyl alcohol. They then injected glue to consolidate the flakes.

This year, the team is working on repainting missing and faded colours. Based on the international charter on the Conservation and Restoration of Monuments and Sites, known as the Venice Charter of 1964, the team must use only watercolours produced by London-based Winsor and Newton paint company. "The United Nations Educational, Scientific and Cultural Organization (Unesco) also identified 12 specific colours that we can use for repairing murals that can match natural colours used in old times," he said.

The team, half of whom were recruited from artists from the previous restoration project in 1982, plans to finish painting the lower part of the murals this year.

They plan to inspect the upper murals next year. They will repeat the same mural restoration process starting from removing dirt to repairing the colours.

"After the project is completed, we will do a routine check. It is part of our conservation process that we have done not only for the royal temples like Wat Suthat, but also local temples and other historical sites throughout the nation," he said. 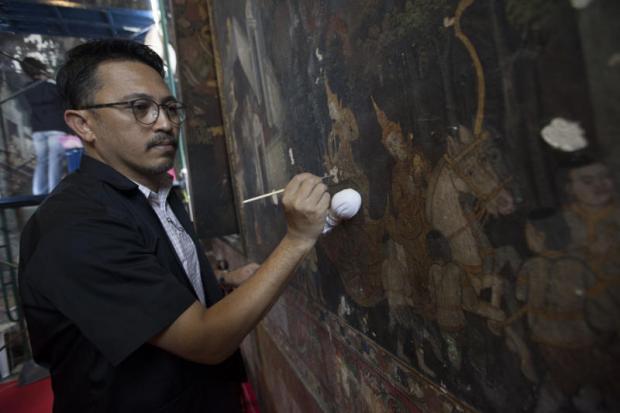 Alongkorn Thiamjun is the head of the mural restoration project. Pawat Laopaisarntaksin 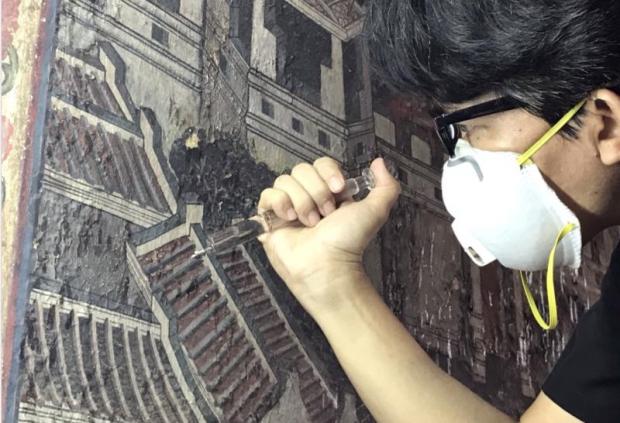 Glue is injected to fix the flakes. Photo Courtesy of the Fine Arts Department