The TV presenter once involved in a brush with the law over his access to a wildlife sanctuary is keeping his head down as a row breaks over the poaching furore in the Thungyai Naresuan sanctuary in Kanchanaburi province.

Jesdaporn “Tik” Pholdee, host of the long-running eco-tourism show the Navigator, was charged with trespass seven years ago when he slipped into the Phu Khiao Wildlife Sanctuary in Chaiyaphum province, after he defied an agreement not to film there.

Netizens have drawn a contrast between that case and the one involving construction tycoon Premchai Karnasuta, who was granted access to the Thungyai Naresuan sanctuary amid claims his party went in as guests of the Department of National

Rangers arrested Mr Premchai and three others at their campsite off-limits to visitors inside the park in Thong Pha Phum district in Kanchanaburi last Sunday. 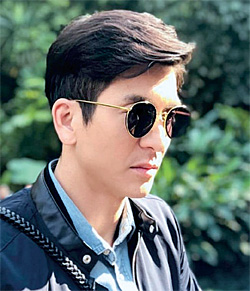 They face nine charges, including illegally poaching protected wild animals, after park rangers found with them three rifles, bullets, and carcasses of a black leopard, a Kalij pheasant and a barking deer.

A retired senior official from the department, and adviser to ITD, Noppadon Prueksawan, phoned Ms Kanchana seeking permission on behalf of the group.

Giving evidence to the Natural Resources and Environmental Crime Suppression Division on Friday, Ms Kanchana said she told Mr Noppadon he would have to seek a permit from the 3rd Regional Office of Protected Areas in Ratchaburi’s Ban Pong district. However, she also called the office herself to help smooth the way.

Reports say the office waived entrance fees for Mr Premchai’s group, and failed to search his vehicle, because he was regarded as the department’s guest.

Ms Kanchana, who has come under heavy social media pressure for her role in the saga, was also involved in Tik’s Navigator furore seven years ago, though in that case she turned down the show’s application to film in the Phu Khiao Wildlife Sanctuary.

Netizens are upset about the apparent double standard, though Ms Kanchana insists the cases are different. Mr Premchai’s group, she said, claimed they wanted to camp overnight to study nature. Tik’s crew, however, wanted to film in the area for their eco-tourism show, which could have spurred unwanted tourist visits to the fragile site.

“We would normally allow nature study visits, and how were we to know that people of this stature would actually bring in guns?” she said, when asked why no one checked if Mr Premchai’s party was armed. She insisted she did not know Mr Premchai personally.

Asked about the Navigator saga seven years ago, Ms Kanchana said she brought charges against Tik’s crew after they slipped into the sanctuary’s Phu Khing area despite being refused access. The Navigator earlier had applied for permission direct to the then minister of resources, Suwit Khunkitti.

Police and prosecutors ultimately decided not to pursue the matter as Tik’s crew did not mean any harm, but simply wanted to showcase the sanctuary’s beauty.

Dropping the charge, they said they would rather the episode served as a lesson. The department said it backed the decision.

Tik has stayed mum all week as the poaching furore broke. However his wife, Sitamon “Peach” Tangsuwan, left a social message saying Tik was away from home filming another series of the Navigator show.

“Carry on working to look after the forests. Here, I can look after our two young sons. Don’t worry about us,” she said in a message to him.

Actress Lallalin “Cheri Belle” Tejassa insists she was faithful to her former DJ boyfriend, but called off their relationship when she caught him seeing someone else. 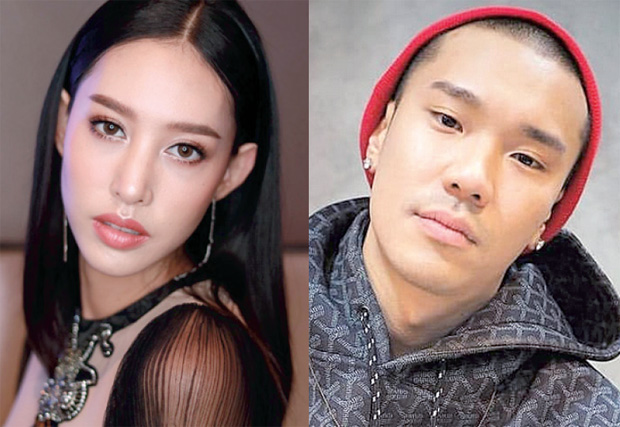 Belle, as she is known, came under fire on the internet last week after her former boyfriend, Natchapongpol “Boss” Sutdee, told the media in tears that their three-year pairing ended because she found someone new. “I can’t stand seeing pictures of them together,” he said.

Opening up last week about the fuss, Belle admitted she was seeing someone else but they were still at the talking stage. “I started seeing him within a week of leaving Boss late last year, which might seem a bit quick, but Boss and I had already parted,” she said.

Bell is unhappy with the way Boss portrayed their split in the media. “I never saw anyone else when we were together. We quit because I discovered he had someone new.

“I knew what Boss was like, but when he met me he said he would change.

“I have seen Boss crying on Instagram. It’s not the first time, but it can’t compare with the tears I have shed. If he was truly a good person, I wouldn’t have quit,” she added.

She had told Boss about the new man in her life and he promised they would not criticise each other publicly. She believes he has gone back on his word.

“I have now blocked Boss on social media; we have nothing left, not even friendship. He sent a message to my manager trying to make up, but I ignored it.”

Her manager introduced her to the new man in her life. “He is involved in sales. We don’t do much openly yet. He doesn’t have to be rich; all I ask is he is faithful and not lie,” she said.

Boss has yet to respond to the latest barbs.

Actor and presenter Puttichai “Push” Kasetsin is urging fans not to get carried away after he posted a set of workout pictures in which he appears well endowed in front. 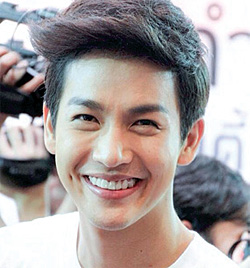 Push joins a list of male celebrities who, inadvertently or otherwise, recently have posted images of themselves working out in which fans were

taken not by their exercise routines but the size of their manly equipment.

Like Push, the others caught in the spotlight, DJ Pakorn “Dome” Lum, and actor Gun “Fluke” Kantathaworn, insist they were not trying to show off their assets and fans are getting the wrong idea.

Laughing off the fuss, Push said he posted a set of 10 shots of himself in jogging gear without checking how he looked below the waist.

“I was wearing three layers, which might account for the bulge — underwear, fulllength stretch pants, and a pair of shorts over that.”

The extra layers were to protect his legs from friction when running, not give him a bigger bulge in the groin area, he insisted.

“I didn’t alter the pictures, and they didn’t attract any sexually depraved comments. However, I will have to check more carefully in future before I post,” he said.

Dome, caught earlier exercising in the park in a pair of clingy shorts, is well known for the supposed size of his member, but modest Push urged reporters not to draw any comparisons.

“Don’t go likening me to P’Dome. My mother blessed me with only a little. When I am teased it’s embarrassing,” he said.