Queen Silvia of Sweden, who chairs the World Childhood Foundation, spoke recently in Thailand and talked with Elite

Parents sexually abusing their own three-year-old son to make easy money online, child molesters working as primary school teachers, Buddhist monks running child sex rings. Time and again, Thailand has produced some incomprehensibly awful news headlines, and time and again, it seems like nothing is getting done. With women now getting their voices and stories heard in the powerful #MeToo and #TimesUp movements, it seems like we should also start focusing on those who are still voiceless: children.

It is estimated that one in five girls and one in 10 boys are subject to sexual abuse around the world. According to Safeguardkids Thailand -- an organisation helping sexually abused children, 19% of those children are raped when under 18 years old, 71% in their preteens (under 13), and, most disturbing of all, 10% are infants under four years of age.

Child-sex abuse is a serious and heinous crime. So serious that Her Majesty Queen Silvia of Sweden dropped by the Kingdom earlier this month to visit her programmes (Friends International and Child Safe Agents) and give a speech to 2,000 lay judges from the Juvenile and Family Courts of Thailand.

As the founder and chairwoman of the World Childhood Foundation, Queen Silvia has been focusing on raising awareness and building projects globally to end these horrible crimes.

The academic conference she spoke at was a gentle and diplomatic reminder to the lay judges of Thailand to do their duty and do it well, because in 2015, Thailand's National Legislative Assembly passed a penal code amendment to criminalise the possession, sharing and production of child sexual abuse material (unfortunately still known as child pornography) -- being the first Southeast Asian country to make child sexual abuse material illegal. Those who possess it will receive five years in prison; those who share it will get seven years; and those who produce it will get 10 years.

"[It] is excellent and you should be proud of it," Queen Silvia said in a rare, exclusive interview with the Elite the night before her speech. "It's really wonderful ... and I'm sure other countries will follow your example." 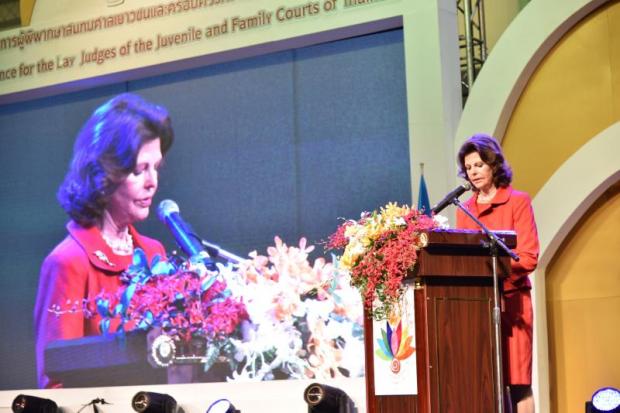 Queen Silvia giving her speech to the audience of 2,000 lay judges − encouraging them to reach out and help children who have suffered sexual abuse. Banluechai Srinuan

Often seen as a crime without a victim, we need to remember that behind the screen is an actual child suffering. Not only will the material traumatise the victim over and over again; furthermore, sexual abusers use these materials to convince other young children that such activity is normal.

"The internet is a very wonderful tool, but a very dangerous tool," Her Majesty said. "There have been cases in Sweden as well. [A man] said he was 13 years old, but he was 45. He built up a kind of friendship on the internet and gave false identities. [He told them,] 'I would love to see you. Can we meet?'. Then he abused her. He did this with several girls. Fortunately they got hold of him. So it's very dangerous. And so we have to help."

She established her foundation in 1999, and there were many forces that compelled her to help these unfortunate children.

"We travel quite a lot, His Majesty and I," she said of herself and her husband the king. "The whole time, I felt that perhaps I could do something myself. You know, we don't mingle in politics, but I could draw attention to certain questions. Many countries have been working a lot and have organisations to take care of street children, but nobody really dared to talk about sexual abuse."

"Once, there was a big conference in Paris," she continued. "I talked about the sexual abuse of children. I remember it was a huge hall. When I was speaking, everybody was curious and listening. But as soon as I talked about sexual abuse, I lost them. It was so shocking that I, as a woman and as a queen, was talking about sexual abuse. I told them, 'I know what you are thinking, and I have to tell you it's very difficult for me as well to talk about these subjects. But if we don't, then you can't change the situation. And who is suffering? The children'. But I am so happy that now the situation is different. Everybody talks about it. It's on their agenda all over the world," she said, referring to the United Nations meeting last year in September to discuss ending violence against children.

"You know, children, they are extraordinary," she said. "In spite of everything which had happened to them, if you reach out with your hand, if they don't feel alone, you see in their eyes that they believe again in the future. That's a wonderful moment."

During the interview, Queen Silvia was humble and gentle, making everyone else in the room feel at ease. But the next day we saw another side -- strong, determined and steadfast.

Speaking to an audience of 2,000, she spoke slowly and calmly. She talked about the World Childhood Foundation and her projects in Thailand. She congratulated the country on being a brave pioneer by passing the new law. Then, she gave some important reminders for everyone, not only the judges:

"The justice system is an important cornerstone in responding to child sex abuse," she said. "Clear and strong legislation is a crucial starting point. But laws are only as powerful as their implementation and application. This requires awareness, knowledge and dedication. Therefore, I am especially happy for the gathering here today. This shows your commitment to protecting children in practice."

"Children who have suffered abuse deserve that we not only use our brain," she continued, "but also our heart when we engage to help them. Children need to know that we care. Ladies and gentlemen, you all have the opportunity, and indeed the responsibility, of being a caring adult, engaging both your brain and your heart for a child who has suffered abuse. You can give that child a voice."

If you come across child pornography or circumstances that you suspect may include child sexual abuse, call the Thai Police at 1911, or make an online report at ThaiHotline.org. You can also contact the Thailand Internet Crimes Against Children (TICAC) task force on Facebook or through ticac@police.go.th. The TICAC task force is supported by the FBI and the US Department of Homeland Security to combat sexual exploitation via the internet. To get information and statistics on child sexual abuse in Thailand, go to http://safeguardkids.org. To learn more about how to help at risk children, go to http://childhood.org or http://friends-international.org. To volunteer in helping at-risk children, go to http://thinkchildsafe.org

"Together with Friends International, we have worked long to reach, protect and reintegrate children in vulnerable situations, living and working on the streets. The work started out in Bangkok and has expanded to include Poipet at the Thai-Cambodia border.

"Through this project, more than 800 children and youth annually receive direct services aimed to protect them from abuse and integrate them into safe families, schools and communities.

"Furthermore, close to 80 so-called ChildSafe Agents have been educated. ChildSafe Agents are volunteers recruited to be the eyes and ears for children, watching out for their safety. ChildSafe Agents may be street vendors, tuk-tuk drivers or others trained and equipped to recognise and respond to situations of child abuse or distress." — Queen Silvia in her speech

"When they launched their outreach programme, the only support available for families in need was in the form of orphanage care. That led to hundreds [650] of families effectively abandoning their children in the belief that it was the only available alternative that would give their child a better future.

"Now, our project offers these families a holistic programme that helps them stay together, which is better for the individual child, the family and the community. An important part of the project is to inform children and families about neglect and sexual abuse. Children learn to name their body parts. They get a chance to talk about good and bad secrets and what to do if someone touches them inappropriately, as well as to whom they can turn for help." — Queen Silvia in her speech 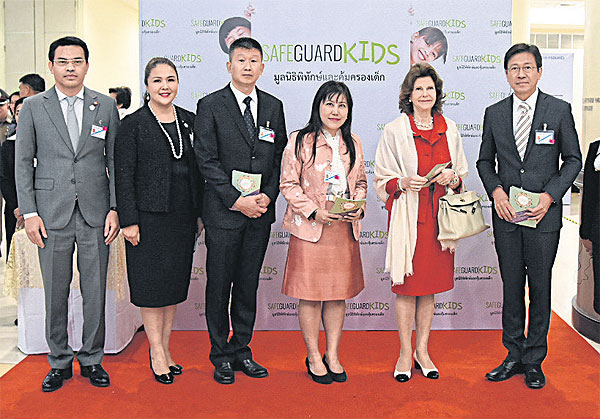