The plight of the stateless
Life
Social & Lifestyle

The plight of the stateless

While members of the celebrated Wild Boars football team received their national ID cards this month, thousands of others live with uncertainty and suffer the consequences of living in limbo

published : 14 Aug 2018 at 04:00
newspaper section: Life
writer: Story: Paskorn Jumlongrach
Left After decades of fighting for Thai citizenship, Thanom, right, and Yeed Chukaew finally obtained their ID cards although some of their grandchildren are still living in Thailand as stateless people.

Thanom's ancestors lived in what was Siamese territory, near Bang Saphan district in Prachuap Khiri Khan, over a century ago. Back then Burma, to the west, was a British colony and people who lived along the border crossed back and forth without much difficulty. When state boundaries were redrawn during the reign of King Rama V, his family was stuck on the other side. As a young man Thanom was a cattle herder, and he travelled around Karen villages to buy cattle and buffaloes and crossed over to sell them on the Thai side. When he started this job, a cow was just 20 baht and a buffalo was 50 baht.

After a long fight they've finally received Thai ID cards, but Thanom and Yeed Chukaew don't seem too happy. It took them over a decade to obtain Thai citizenship, but almost a dozen of their children and grandchildren still haven't obtained their legal status even though they've been living in Thailand most of their lives.

Uncle Thanom, in his 80s, and Aunt Yeed, in her 60s, are among the first groups of "displaced Thai people" -- Thai plad tin -- to have been recognised by the Nationality Act. The historical shifting of state boundaries, the advent of war and the rigidity of law have combined to cast Thanom and Yeed into statelessness for over half-a-century, and now their children and grandchildren will have to endure the same fate.

Their ordeals -- and now their children's and grandchildren's -- are not unique. There are over 486,000 stateless people in Thailand, according to state data, with over 146,000 under 18. Some of them are familiar to the public, such as the four members of the Wild Boars football team, who were granted citizenship just last week. But the anonymous mass of ID-cardless people cover the entire country from North to South due to various circumstances, from being offspring of migrant workers to being displaced by geography and history.

Such as in Thanom's case. 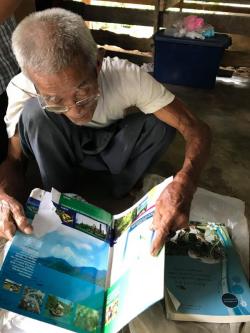 In his 20s when he wanted to be ordained as a Buddhist monk, Thanom went to Bang Saphan, where his family and relatives still lived, through the Singkhorn pass. It took him three days to walk.

When Thanom started a family with Yeed, their home was in Tanintharyi in what was then Burma. Their land was large enough to feed their five children. Unfortunately, the Burmese military government launched an operation against ethnic armed groups in that area. Afraid of being forced to join the fighting, Thanom decided to take his family to Thailand, and they settled down with their relatives in Bang Saphan -- as stateless people, however.

"I have been active in the movement as I would like to help our people. I don't want to see our children in trouble because of their non-status," Uncle Nom said of the formation of the Displaced Thai People Network.

Gradually, Thanom has become one of the movement's leaders. They submitted letters and demands to various prime ministers, relevant state agencies in Bangkok and locally. Importantly, they organised a long march to the parliament and were able to have a new citizenship law for displaced Thai people issued.

Thanom and Yeed received their ID cards in June this year. Ironically, their efforts that pushed for the new law did not really "reinstate" the rights to them. Instead, they were "converted" to Thai nationality -- that subtle nuance of the law means they do not receive every right that a born-in-Thailand person receives, such as the right to apply for public office.

"Although I now have a Thai ID card, it's not over. I am old. I am worried about the young ones who still don't have the card. They live in difficulties. If I could transfer my card to them, I would do so immediately," said Thanom. "I'd like all displaced Thai people to get the card, and thankfully more and more of them are getting one. As a Buddhist, I am doing whatever I can to help. Even though I would not get anything in return, I consider it as a merit," he says.

The issue of stateless people returned to the headlines recently thanks to two high-profile cases: the plight of four survivors of the Tham Luang cave ordeal, and the 107-year-old Karen-ethnic Ko-ee Mimee.

Last week, three young footballers and the coach of the Wild Boars team finally took the oath of citizenship after being granted Thai nationality. They were born to parents from ethnic groups who never registered their birth with the Interior Ministry, according to reports. Adul Sam-on, Mongkol Boonpiam, Pornchai Kamluang and Ekkapol Chantawong officially became Thai citizens when they, along with 26 other people, took part in a ceremony held at the Mae Sai district office yesterday afternoon to present them with Thai ID cards. 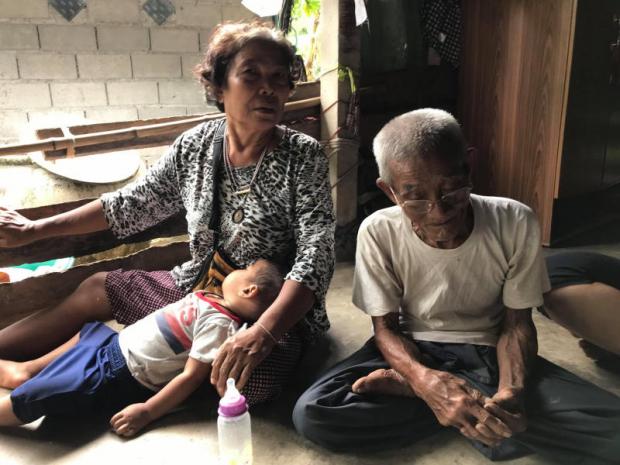 Left After decades of fighting for Thai citizenship, Thanom, right, and Yeed Chukaew finally obtained their ID cards although some of their grandchildren are still living in Thailand as stateless people.

Although their cases aren't exactly the same as that of Thanom and Yeed, who were displaced Thais, their story has rekindled the debate on the fate of stateless people in Thailand. Another much-reported case -- and this is more similar to that of Thanom -- is that of Ko-ee Mimee, the man who was born on Thai soil in 1911 but had to wait over a century to be recognised. National Park officials burned down his home and evicted him from his forest dwelling, claiming that Ko-ee was an illegal migrant from Myanmar. The court, supported by witnesses and human rights agencies, proved otherwise and granted him Thai nationality.

Now Thanom Nom, or Uncle Nom to his people, looks forward to the future of his clan. But the past never escaped him and his wife.

Five of Thanom's and Yeed's children and nine grandchildren haven't received Thai ID cards. They've tried to register many times but their cases were repeatedly dismissed.

"I lost three of my five children. One was arrested by a policeman due to the absence of an ID card, he was forced to take off his clothes in the middle of the street," said Yeed, Thanom's wife.

"My other son got married to a Muslim woman in Bang Khunsai district, Phetchaburi. But without an ID card, he couldn't work. He was able to only stay at home and take care of the children. He felt depressed and killed himself too.

"I went to the funeral but was not allowed to bring back the body of my son due to religious rules, I secretly took a small part of him home, so we could hold a funeral and make merit for him."

"Within one year I lost three children and two grandchildren, I cried so much. I worked in a Buddhist temple, cleaning kitchens, to make merit and send it to them."

At present, Thanom and Yeed live in a small house on a piece of land inherited from his uncle. Their children's houses are on the same plot of land. However, the land has been almost closed by other neighbouring houses. The entrance is expected to be closed soon. The two elders have no way out.

"We are not young anymore. We can barely do labour work. Our children cannot either, as they don't have ID cards. I wish I could give mine to them. So that they can work and earn to feed the family," says Uncle Nom. He feels his life has been long and he is weak. His health is not that strong to fight as he used to.

He has an ID card. But after all is said and done, the piece of laminated paper doesn't seem to be that significant for both of them. 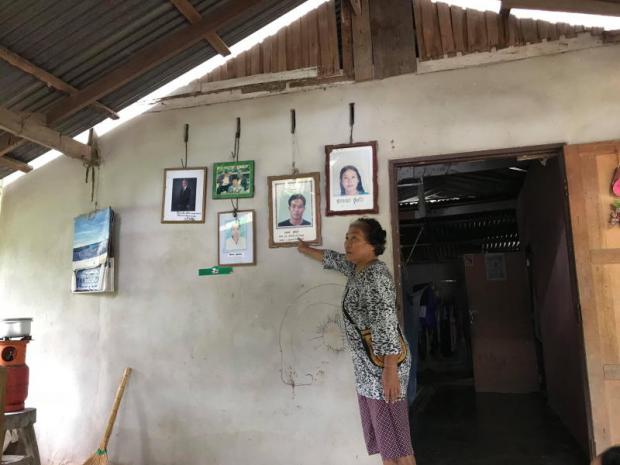 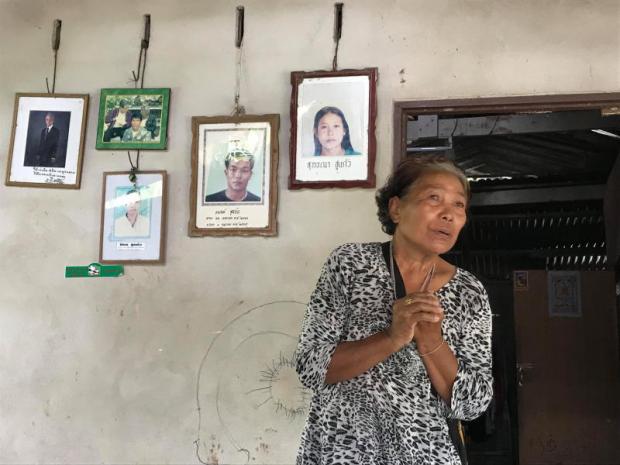