The robes are getting tight
Life
Social & Lifestyle

The robes are getting tight

Thai monks eat poorly and do not exercise, so massive health problems are the inevitable consequence

After only 10 days in the orange robe, Teerawit Eakpatcha not only gained profound Buddhist insights but also an expanded waistline.

"I gained 3kg in only 10 days," said the 28-year-old. Having left the monkhood just recently, Teerawit was ordained at a rural temple in Kamphaeng Phet province.

Teerawit recalled dietary choices he saw at the monastery where he stayed during his ordination -- despite being wide in variety, most of them were very strong in flavour and high in fats.

"These foods definitely have consequences for health," he admitted.

Obesity among Buddhist monks has been a national healthcare issue in Thailand for quite some time. But it was only recently, when the "National Health Charter for Monks" was raised once again, that the subject caused international media to report on the healthcare dilemma facing Thailand's monastic community. The latest efforts to bolster the health of Thai clergy, as part of the charter, took place late last month at Mahachulalongkornrajavidyalaya University in the northeastern province of Khon Kaen, where seminars, exhibitions, physical check-ups and other educational activities were organised.

"It's the same thing Thai people in general are suffering: these non-communicable illnesses. And the figures are rising not just among monks but also lay people," said Wantanee, programme director of the Master of Science Programme in Nutrition and Dietetics under Mahidol University's Institute of Nutrition.

Wantanee cited the 2015 statistics from Bangkok's Priest Hospital under the Ministry of Public Health's Department of Medical Services, which reveal that the five most commonly found diseases among Thai monks were high blood cholesterol, high blood pressure, diabetes, kidney failure and degenerative knee joints. This data is corroborated by figures collected between 2016 to 2017 by the Ministry of Public Health from 200 temples in 50 Bangkok districts, showing 60% of surveyed monks struggle with high blood cholesterol while around 50% had high blood sugar.

Campaigns and activities which aim to educate the general population about healthy food offerings for monks are launched regularly. Among the forefront is Assoc Prof Jongjit Angkatavanich, a health and nutrition expert from Chulalongkorn University's Faculty of Allied Health Sciences, who in 2011 initiated a project entitled "Song Thai Klai Roak", translated roughly as "making Thai monks disease-free". Jongjit's ongoing project eventually resulted in a series of educational pamphlets -- four for monks, seven for the general population and another four for food vendors -- to provide them with updates on the monastic community's health problems and how they could be part of the solution.

Apart from Jongjit's project, there is the National Health Charter for Monks, published last year by the National Health Commission Office as a guideline to promote improved health among men in the orange robe across the country. The Health Charter is divided into several chapters which cover topics like how monks should take care of their health based on Buddhist discipline, how the community should play a part in making monks healthier and the role of monks as health leaders in the community.

Despite such movements, non-communicable diseases among Thai monks still wreak havoc in this country. And people mostly blame it on two major factors: first, monks are required to accept and eat whatever is offered to them regardless of the quality and, second, physical exercise is not allowed as they are supposed to remain composed and peaceful.

Teerawit agreed that the lack of physical exercise is part of the problem. A workout aficionado himself, he admitted it was quite against his nature to not have had any exercise at all during his 10 days in the monastery.

"There were no physical activities, other than cleaning the temple's premises, which was a monastic duty," he recounted.

Nevertheless, Wantanee said that although monks are not allowed any physical activities, say football, they can opt for things that do not violate their discipline, such as yoga or stretching.

As for the diet, the nutrition expert said it all comes down to public education -- a once-and-for-all solution to non-communicable disease issues not just for priests but people in general.

"No matter how hard we try to fix this problem among the monastic community, at the same time we must not fail to make Thai people understand the importance of healthy diets and good health. Foods that monks eat are in fact foods that we eat which means they have to be healthy.

"Of course, what Buddhists usually give to monks as alms offering is food that they like. If they are properly educated, they will eventually come to like healthy, quality food. And that would be what they give to monks," Wantanee commented.

Monks themselves have to be educated, too. Buddhist monks are only allowed two meals a day -- breakfast and lunch. The rest of the day they are allowed nam pana, which includes juices made from fruits that are not larger than the size of a fist. Such drinks, Wantanee suggested, should not be high in sugar, which could potentially make the monks overweight if they are not able to engage in physical activities that burn these calories.

And with regards to the food providers' side, Wantanee suggested that there should be a model, an educative mechanism of sorts, to equip food vendors with knowledge that includes not just food safety and hygiene but also other dimensions such as the nutritional value of the food they sell and how it might contribute to people's bad health. This model should be implemented by policymakers or people with authority, so that people involved are obliged to follow.

"Food vendors never mean to harm people," she said. "They only want to serve tasty and clean food, but somehow they still fall short of certain know-how like how to use the right amount of sugar, salt and oil and so forth. If these food sellers are made to be aware of all this stuff, they will understand the true meaning of good food and this will bring positive consequences on a larger scale. Not only will monks get healthier diets but everyone else too."

People's attitudes towards non-communicable diseases must also be changed.

"People think non-communicable diseases are not a big deal because they progress slowly," added Wantanee. "Sometimes it takes five or 10 years until symptoms become serious. So when speaking of diseases like diabetes, hypertension or high blood cholesterol, they think these are not things that need to be treated right away and that changes in diets and habits are not necessary right now. This is not true.

"This is why education is always paramount. But education must be practical, too. It should recommend solutions that can really be implemented in real life. Without practicality, education is in vain because people will find it impossible to follow. On the contrary, if you suggest things that people find not too difficult to adopt, this will create some changes."

As a former monk, Teerawit only hopes that when people are more educated about healthy diets, food offered to monks will eventually change countrywide.

"I wish to see food that is not too strong in flavour and not too high in fats. A number of Buddhist monks are old and already full of diseases. So don't make things go from bad to worse." 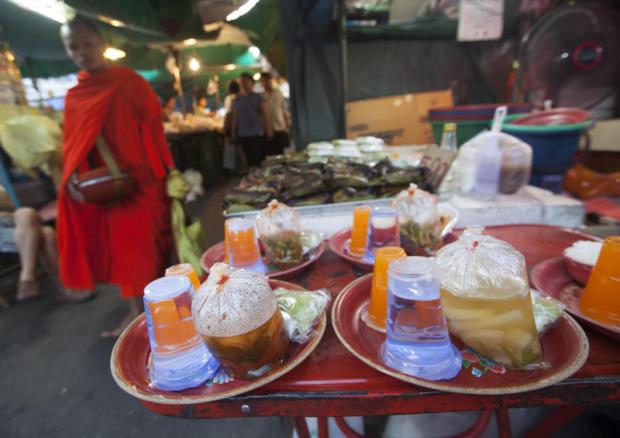