Diving deep in exploring the various uses of the pandan

For desserts and other food to taste great, it's not only about the flavour. The smell is another important factor in making food all the more tasty. A lot of Thai food relies on smell, which mostly comes from leaves. Try imagining Thai food without kaffir lime leaves, basil, tamarind leaves or cha-om leaves. Now what would everything taste like?

Selecting and using leaves in cooking involves long-held local wisdom. People know what leaves to use in what dishes, how much they should use, and even during which steps they should add these leaves to create the perfect balance.

This time, it's about the pandan leaf -- an ordinary leaf with quite a large role. It's quite a simple plant in that it grows naturally under favourable conditions. In the past, gardening in the central part of the country would see a mixture of plants growing together. There are towering trees, fruit trees and vegetable patches. The ground would have ditches to keep water for the plants. On the edge, pandan often grows in a bush. It helps to prevent the edge from collapsing and it also helps to retain the quality of water. A pandan bush is also home to small creatures such as snails and frogs, though they also need shade from big trees. Aside from being a part of food and dessert, pandan can be tied together with other flowers and used as an offering for monks.

Pandan brought extra income for farmers in the past (when trees and fruits were their main source of income). It's something one doesn't have to plant, care for, or put any fertiliser on, nor does it require the use of pesticide. To cut out these leaves for sale, people would cut the lower leaves and let the upper ones grow, then they would cut those later, too. 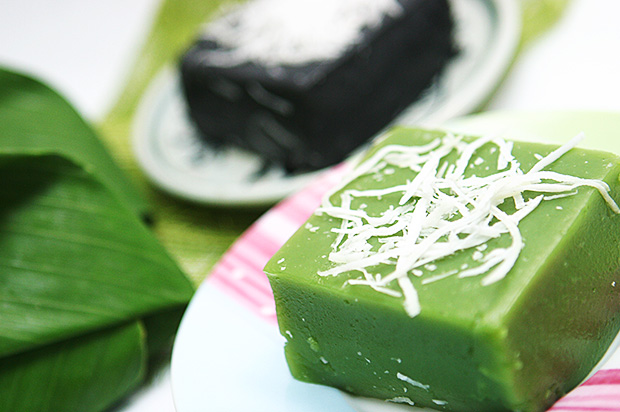 A normal price today sees pandan being sold for 30 baht/kg straight from the plantation. Each sale would depend on the order of those who sell it at wholesale markets. Those placing an order would know which plantations still have pandan. It makes for an extra income that requires no investment. But that's reserved for an old type of plantation and garden only.

Many modern plantations would focus on a single type of plant such as dragon fruit, orange or guava. So, there'd be no chance of getting pandan as a by-product. 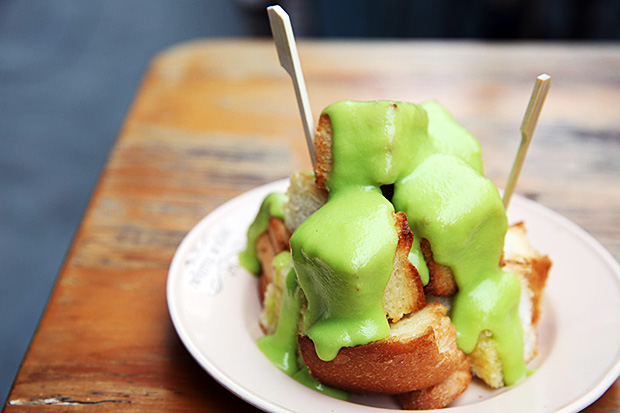 Famous Thai desserts include black coconut pudding, with grated coconut as topping. Ingredients are flour, coconut milk, sugar and limewater. Its black colour is taken from burnt coconut shell mixed with water. Once filtered, it can be mixed with other things to create black sweets.

Some also use pandan instead by blending the leaves together. Once filtered and mixed, it can be used to make green, aromatic pudding. Some prefer this pandan pudding over black coconut.

Thai iced desserts may have fruit preserves topped with shaved ice and syrup. In making this syrup, some would add pandan for aroma.

For tago, the two-tier coconut jelly, flour and sugar are boiled with corn, taro and coconut. The top tier is salty, comprised of flour, coconut milk, salt and sugar.

is often served in a small cup made from leaves. The sweet is at the bottom, and the salty goes on top. There are two types of krathong, or cups. The round one is made from banana leaf; the rectangular one, from pandan leaf. Making a pandan krathong is very simple. The leaf only needs to be split into a square of desirable size. Tago served in pandan krathong looks delightful, and so people often serve it this way. 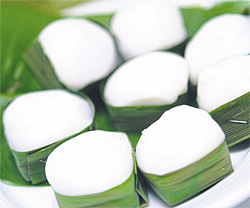 Pandan leaves can also be combined with other flowers, such as orchid, marigold and rose, that people usually buy and offer to monks. These flowers are very popular on Buddhist holy days. Before holy days, an order from the wholesale market will be sent to farmers.

Pandan is also popular among taxi drivers. Taxis generally smell musty, so the driver will put pandan leaves behind the back seat so that the smell of pandan will overpower the mustiness.

Pandan is a plant with many uses. If we were to give an award to a plant with excellent properties, pandan would definitely take home the crown.