A celebration of all things muay Thai
Life
Social & Lifestyle

A celebration of all things muay Thai

The 15th World Wai Kru Muay Thai ceremony will be held next week in Ayutthaya. The annual event is organised by the Tourism Authority of Thailand (TAT) to promote Thai culture and honour muay Thai masters. Last year, about 1,680 people from 60 countries attended the ceremony.

TAT chose March 17 as the celebration date to coincide with the festival of Nai Khanom Tom, the legendary muay Thai boxer born in the Ayutthaya period. The story goes that Nai Khanom Tom was captured by the Burmese during the second fall of Ayutthaya in 1767. Recognising his exceptional boxing skills, King Hsinbyushin (or King Mangra) of Burma invited him to take part in a tournament.

Nai Khanom Tom won against all 10 opponents. So impressed was King Mangra that he granted Nai Khanom Tom and his fellow Siamese prisoners their freedom. The occasion is celebrated every year on March 17.

This year's World Wai Kru Muay Thai Ceremony will kick off at 6pm at Wat Mahathat inside the historical park on Naresuan Road.

To further promote the event, TAT worked in collaboration with the Professional Boxing Association of Thailand for the Miracle Muay Thai Festival on March 16-17 from 2pm to 6pm. The event will host a muay Thai contest at Wat Langkha Khao, a short walk from Wat Mahathat. There will be a fair showcasing traditional Thai arts including sword fighting, yantra tattooing, yantra writing and sword making. There will also be food and games. 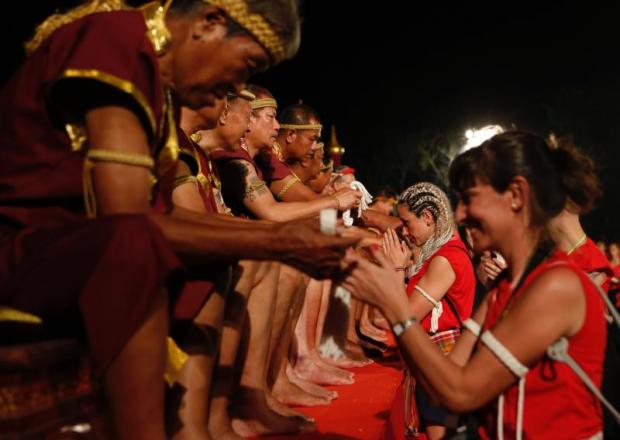