Inside a leper colony, patients may have a very low risk of getting infected with Covid-19, but they cannot run away from the economic slump caused by the deadly disease

published : 6 Jul 2020 at 04:30
newspaper section: Life
writer: Arusa Pisuthipan
Although lepers have not been directly affected by Covid-19, they are suffering a greater financial burden caused by job losses among family members. (Photos by Jetjaras Na Ranong)

Although he is categorised in a high-risk group due to his age, Wai Chaikong isn't intimidated by the novel coronavirus infection.

"I'm more worried about having no money and having no food on the table," said the 67-year-old.

A native of Krabi province, Wai is among 133 patients and family members now living inside Phud Hong Leper Colony, an asylum for people with leprosy. Located in Ron Phibun district of Nakhon Si Thammarat province, the leper colony was established in 1947 as a shelter for lepers to live their lives without fear, social bias and without being looked down upon.

Unlike other charity homes for the elderly, neglected children or people with disabilities, leper colonies hardly see any visitors due to misunderstanding and social discrimination as many still believe leprosy is a plague and easily transmitted. So, patients at Phud Hong Leper Colony have no fear of getting Covid-19 from outside. For them, the only people welcomed back to the colony during the outbreak have been their own family members.

Before Covid-19 hit the world, Wai -- whose legs were amputated decades ago -- lived with his wife at the colony and survived on a state monthly allowance given to senior citizens and to the disabled. With this amount of money, plus state financial aid of 4,000 baht per month, which was paid for three months, Wai has to feed five more mouths including his daughters, son-in-law and grandchildren, who have been forced to stay with him inside the colony due to job loss.

"My daughters and son-in-law used to work as security guards in shopping malls and hotels. During the lockdown, businesses were shut down and they consequently had zero incomes. So they all had to move in to stay with me. Seven people all lived on my welfare allowance," said Wai. Due to such financial difficulty, he has no money left to replace his broken prosthetic legs with a new pair.

Phud Hong's caregiver Prakaipruk Homprakob said although lepers have not been directly affected by Covid-19, the economic fallout caused by the months-long outbreak is almost too much to bear for many patients. 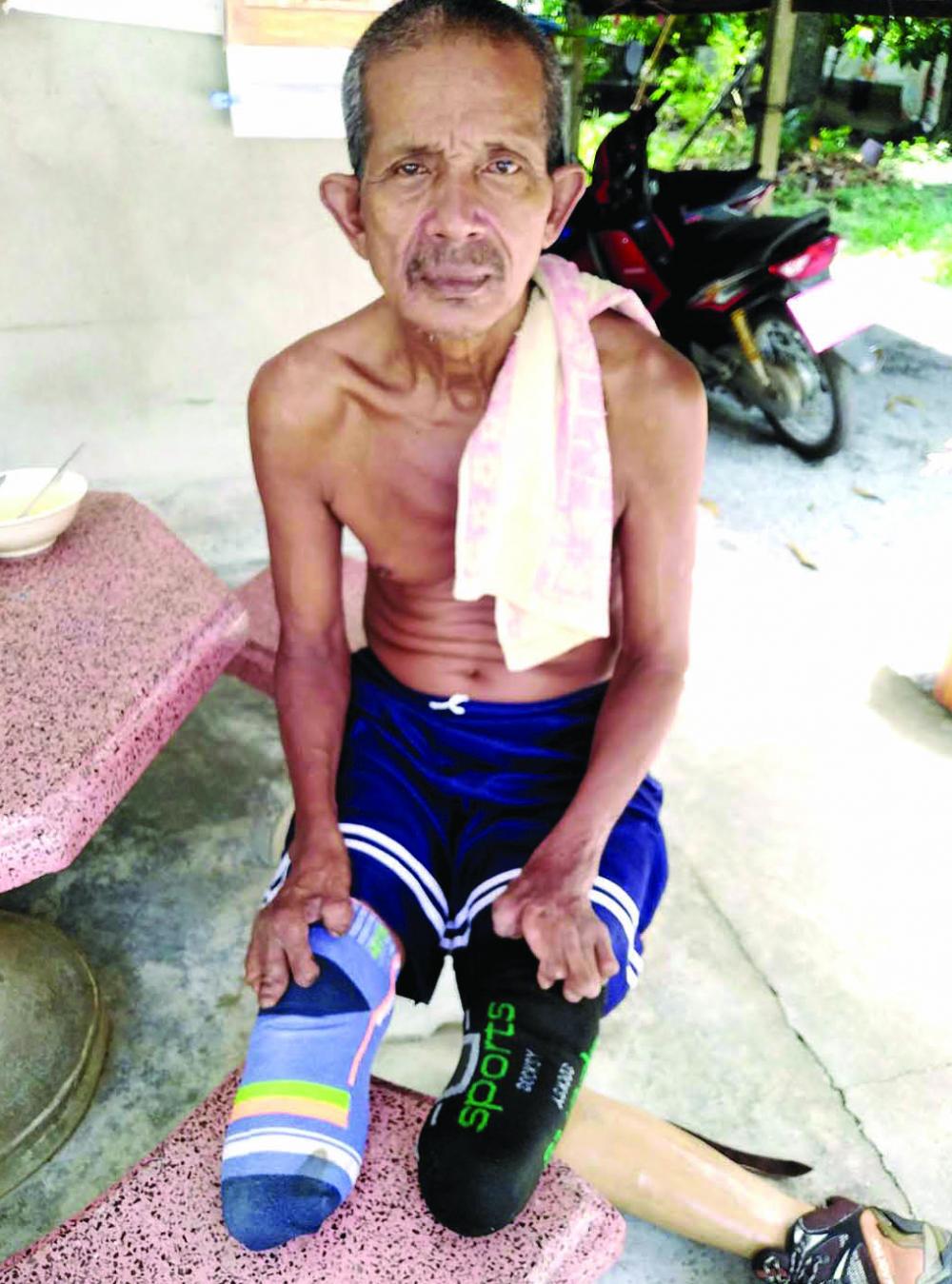 "Lepers did not leave the premises during the lockdown. But their children and grandchildren who otherwise earned their living outside the colony could not shoulder financial responsibilities anymore because they lost their jobs so they returned to live with their parents who are also sick and unemployed," said Prakaipruk, 40.

According to Prakaipruk, a leper here receives an average of 4,200 baht state allowance per month, which is hardly enough for one person. Fortunately, assistance in the form of consumer goods and dried foods were sent by the Bangkok-based Phud Hong Lepers Foundation in the past months.

"Now lepers survive on whatever they have," she added.

Muhammad Biden has been living at Phud Hong Leper Colony since 1974. The 59-year-old leper said that although Covid-19 hasn't sickened him, the fact that he is not allowed to go anywhere during the lockdown aggravates his physical pain.

"I used to be able to go out to at least find something to eat. Now Covid-19 has brought businesses and everything to a complete stop. The only thing I can do is to stay home. The more sedentary lifestyle has caused hip and back pain," said Muhammad who now lives with crooked hands and feet as well as the recently-diagnosed osteoporosis. 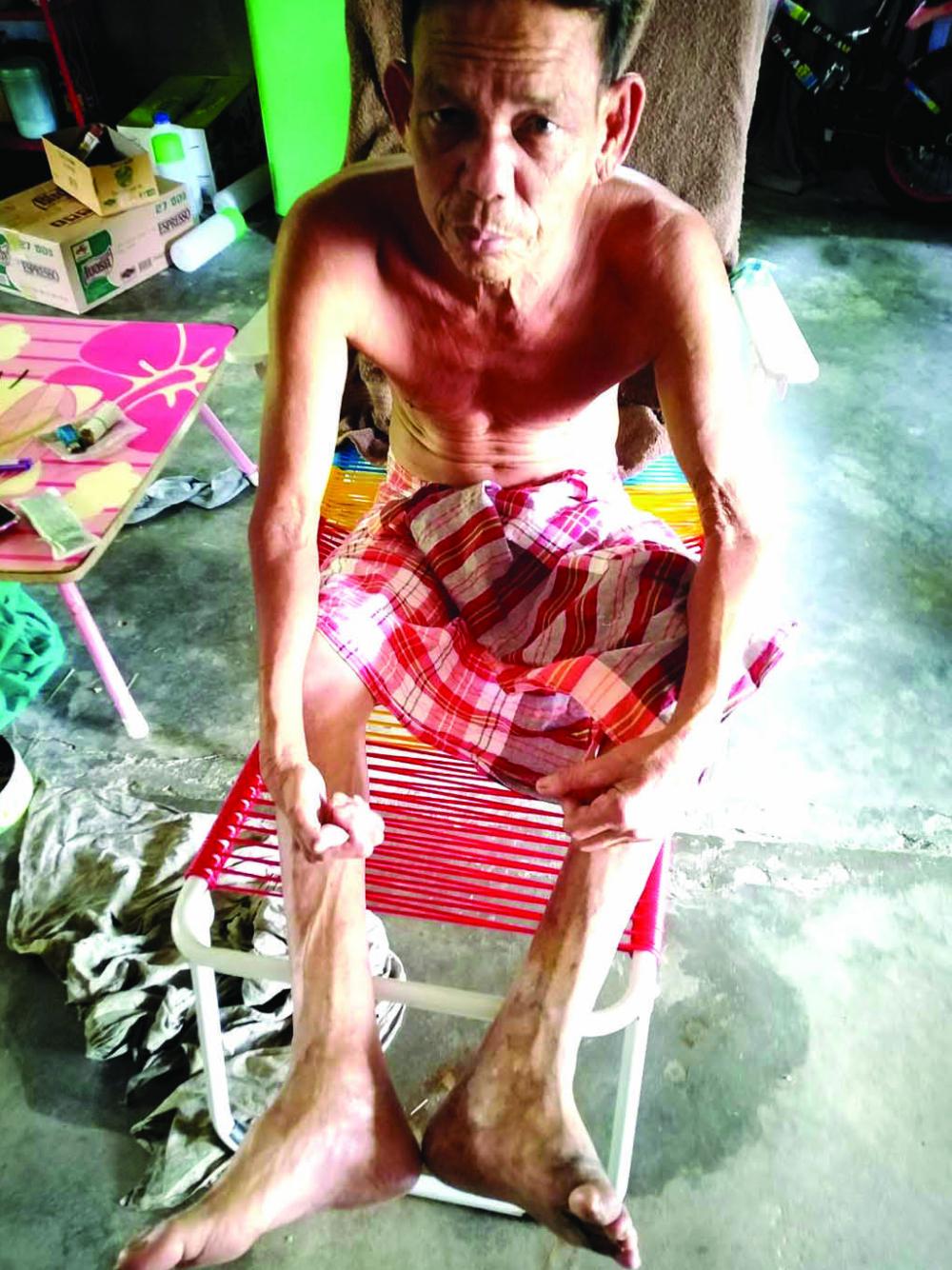 Currently caring for three patients at the colony's medical ward, seven elderly lepers and the overall situation at the colony, Prakaipruk said she has also been affected by the economic impact caused by Covid-19. Her daughter, who used to sell items at flea markets, now has no income. And there's also her grandchildren's little mouths to feed.

"These past few months have been extremely terrible," she said. "Although now a lot of businesses have reopened, many people here lost their jobs for good. In terms of their employment, the future is still unclear."

As for Wai and his family members, employment uncertainty has definitely put more stress and pressure upon their well-being and quality of life. Yet in time of crisis like this one, they can only hope for the best.

"Shopping malls and hotels have now resumed their operations," he said. "But my daughters and son-in-law still haven't got their full-time jobs back. They are hired but only for a few days, which means a very tiny amount of earnings. I do understand that the country's recovery from the pandemic will take time. But until that time, our survival tool is a sufficiency economy."