A. Lange & Söhne marks two anniversaries with three timepieces that pay homage to its founder

In Dec 1990 -- two months after German reunification -- Walter Lange revived his family business under the brand name A. Lange & Söhne.

In 2020, the German watchmaker celebrates 30 years of success in its new era as well as the 175th anniversary of horology in Glashütte, Saxony.

In The Revival Of Time Memoirs, Walter Lange noted how overmining in the Ore Mountains exhausted its deposits in the early 19th century, leaving residents of Glashütte with only sparse sources of income such as farming, straw weaving and wood carving.

Such meagre living conditions concerned Walter Lange's great-grandfather Ferdinand Adolph Lange, who suggested to the Saxon Ministry of Interior that educating its young people in producing timepieces would help lift people out of poverty.

As a result, he opened a workshop with 15 apprentices on Dec 7, 1845, and laid the foundations of a new industry in the mining village. 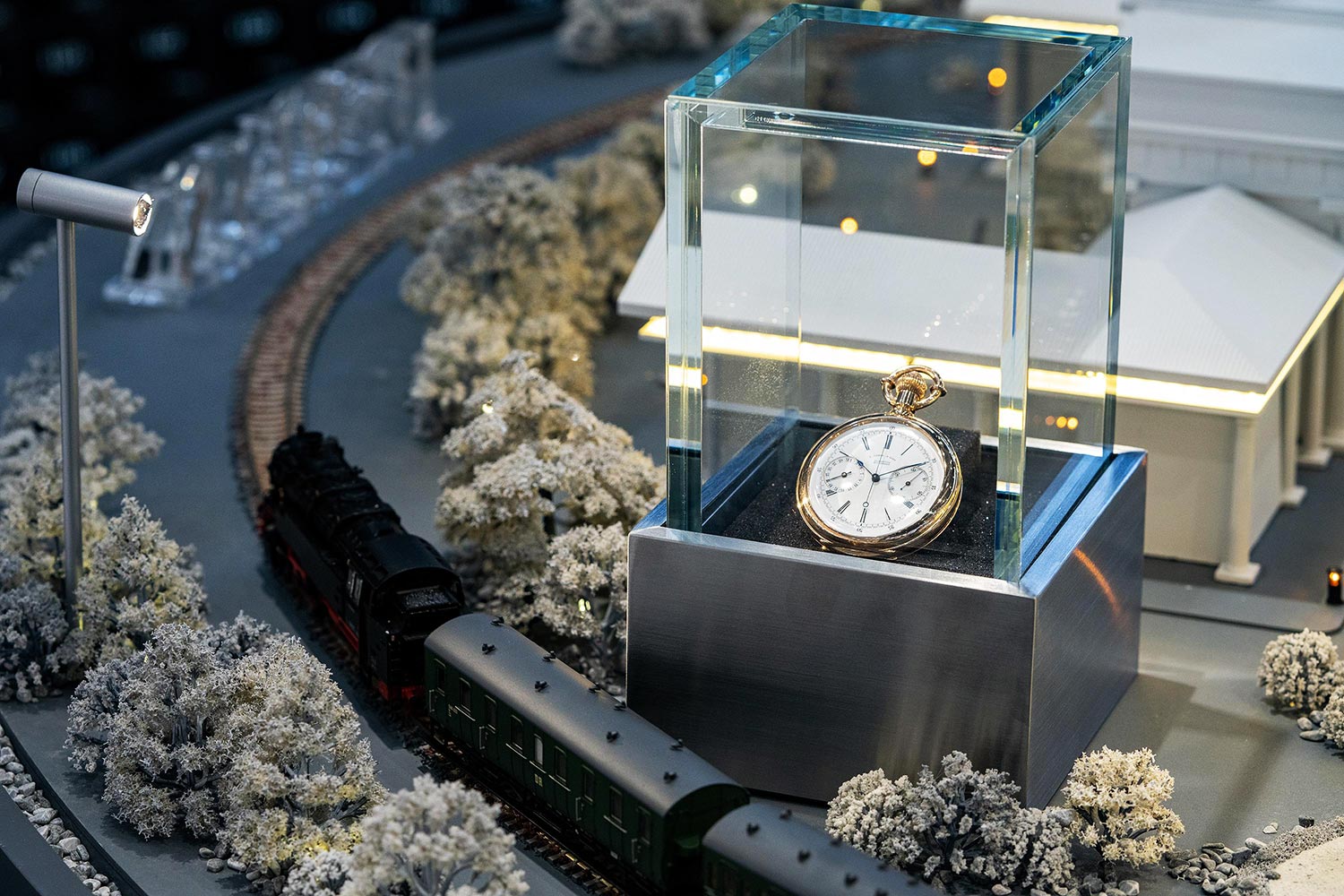 A historic Lange pocket watch was a part of the exhibit that traces the history of A. Lange & Söhne.

Besides innovative precision measuring instruments and mechanisms, the horologist also introduced products based on the division of labour and encouraged the first generation of apprentices to establish their own workshops to make components for timepieces that were assembled at his factory.

Also serving as Glashütte's mayor for 18 years, he brought prosperity to the region which is today known as Germany's watchmaking hub.

The 175th anniversary of Saxony's precision watchmaking is marked by three 1815 models with the epithet "Homage to F. A. Lange". The special editions were recently showcased at Watches & Wonders Shanghai, held from Sept 9-13 at the West Bund Art Center.

The latest timepieces along with historic pocket watches were displayed amid miniature models of Glashütte, Dresden and Berlin at A. Lange & Söhne's show-stopping booth. 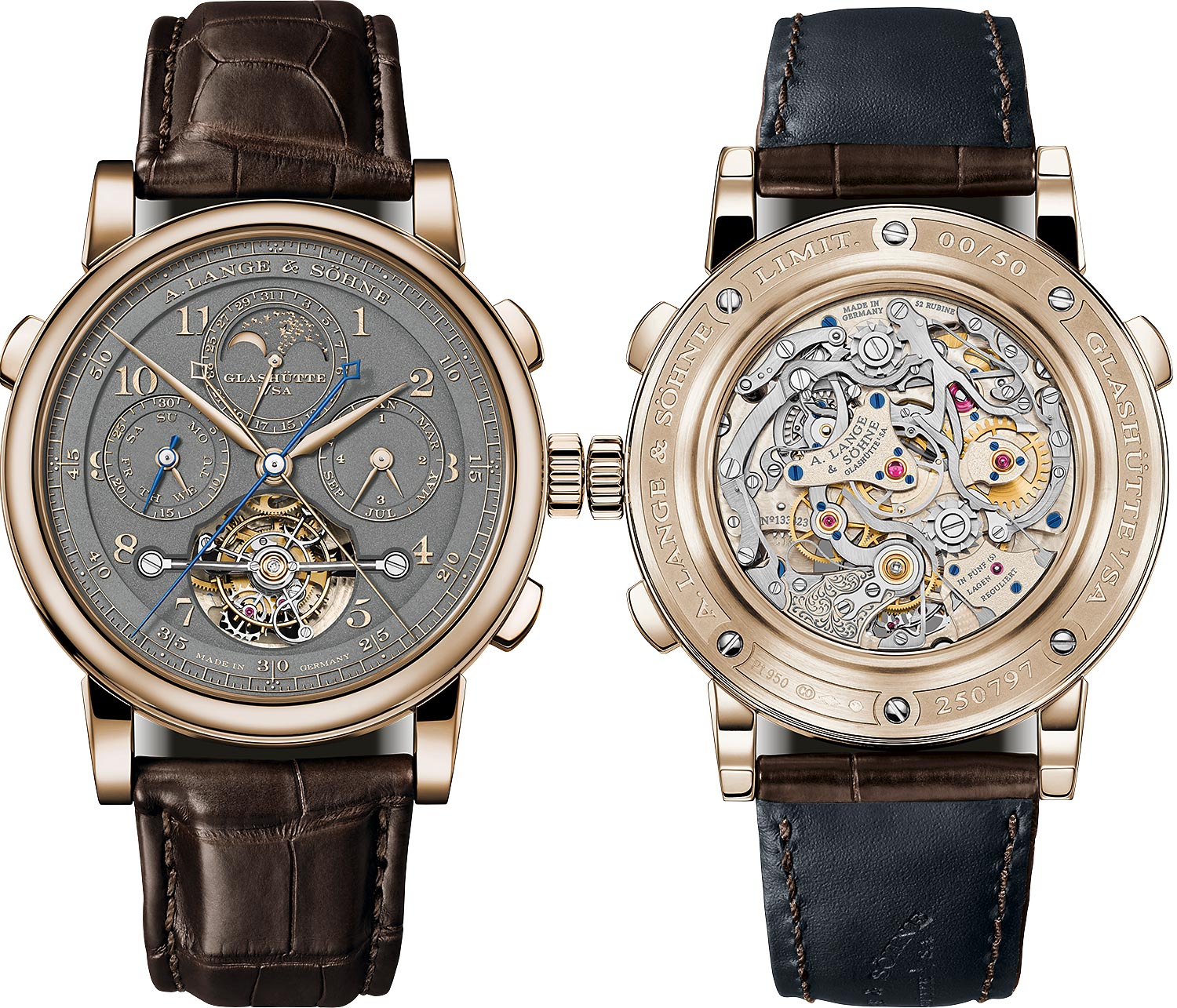 Tourbograph Perpetual Honeygold ‘Homage to F. A. Lange’ is a quintet of complications with intricate movements revealed through the sapphire crystal caseback.

The 1815 family of watches is named after Ferdinand Adolph Lange's birth year in Dresden where he would later attend a technical school alongside undergoing training to become a watchmaker.

His coveted pocket watches inspired the design of the 1815, which represents a connection between traditional and innovative Haute Horlogerie.

The 1815 Thin, 1815 Rattrapante and Tourbograph Perpetual are housed in a case made from patented alloy honey gold which symbolises the brand's scientific prowess and its goal of using metallurgic discoveries for watchmaking.

Additionally, all three models feature meticulous decoration of movements such as grained plates made of German silver and black-rhodium engravings on the balance cock.

Limited to 175 pieces, the two-hand 1815 Thin Honeygold "Homage to F. A. Lange" is a mere 6.3mm thick and has a diameter of only 38mm. With Arabic numerals and a railway-track minute scale, the intricate hand-made enamel dial is a throwback to Lange's pocket watches.

Two classic complications, a chronograph and a rattrapante, meet in the 1815 Rattrapante Honeygold "Homage to F. A. Lange", presented in a 41.2mm case that beautifully contrasts with a black dial made from solid silver. 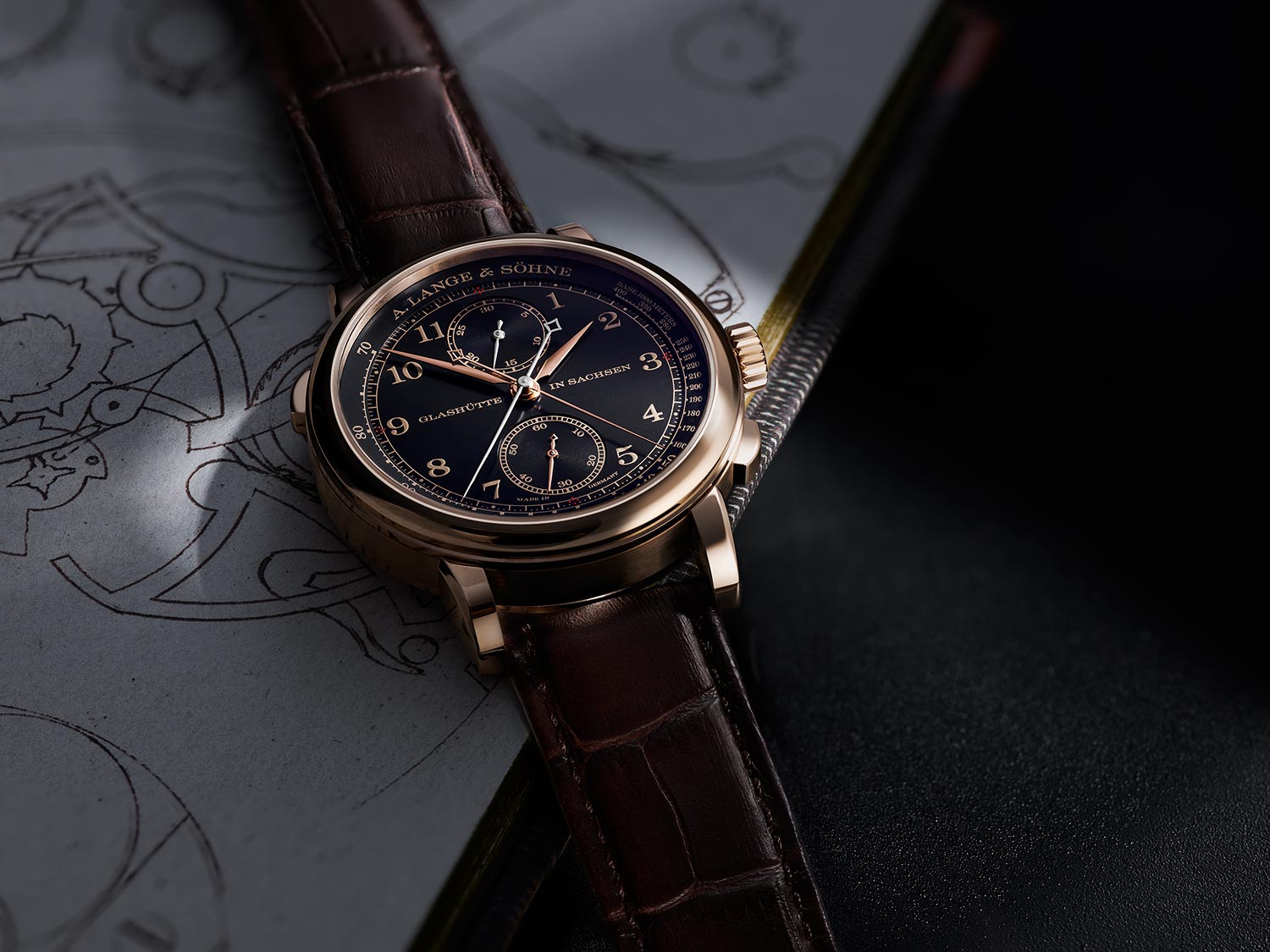 A chronograph and a rattrapante meet in 1815 Rattrapante Honeygold ‘Homage to F. A. Lange’.

With a larger diameter of 43mm, the Tourbograph Perpetual is a quintet of complications and made its debut in a platinum case in 2017.

Orchestrating the harmonious interaction between the chronograph, rattrapante, perpetual calendar, tourbillon and fusée-and-chain transmission was a big challenge for A. Lange & Söhne's watchmakers.

Made of black-rhodium honey gold, the dial of the Tourbograph Perpetual Honeygold "Homage to F. A. Lange" is designed with raised numerals and scales that stand out from the dark background.

Three subsidiary dials show the date at 12 o'clock, the day at 9 o'clock, and the month along with the leap year at 3 o'clock. The upper half of the analogue date also accommodates the moon-phase display, calculated to remain accurate for 122.6 years.

At 6 o'clock, the tourbillion spins while interacting with the fusée-and-chain transmission to offset two disruptive phenomena in a mechanical movement: gravity and waning spring force. Thus, they contribute to improved rate stability and accuracy.

The 1815 Rattrapante Honeygold and Tourbograph Perpetual Honeygold "Homage to F. A. Lange" are respectively available in only 100 and 50 pieces. 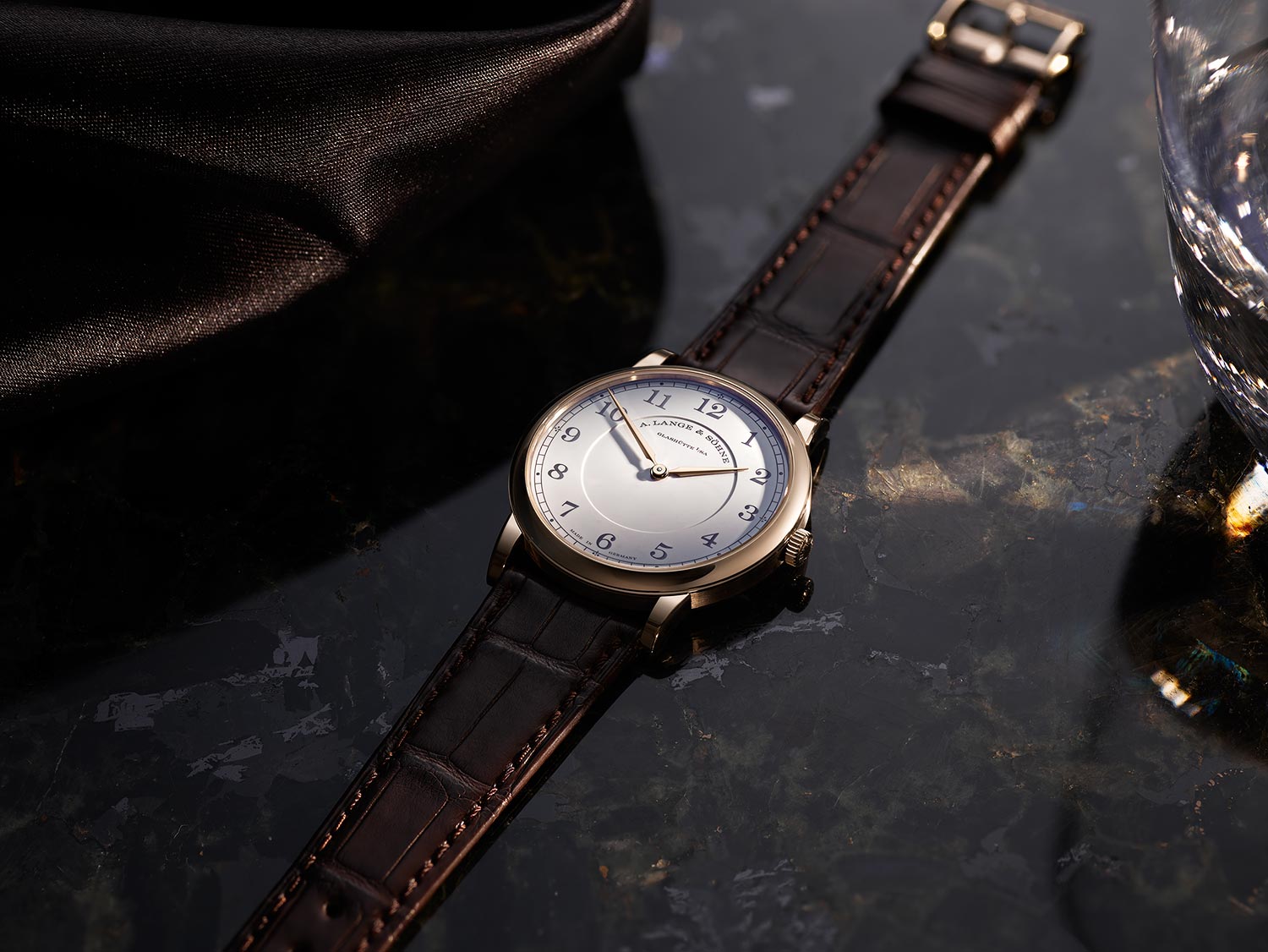 The 1815 collection represents the classic side of A. Lange & Söhne, whose name nearly disappeared from the industry as the family business was expropriated following World War II.

After the fall of the Berlin Wall, fourth-generation Walter Lange relaunched the brand on Dec 7, 1990, on the same date that his great-grandfather had founded his workshop in Glashütte back in 1845.

This month also marks the introduction of the first collection under the new era.

In Oct 1994, the reincarnated company unveiled Lange 1, Saxonia, Arkade and Tourbillon "Pour le Mérite" as well as an advertising campaign with the text, "Germany's East is suddenly beginning to tick differently. A. Lange & Söhne is back -- the legend has come home".

The new tagline also fits well with the late Walter Lange's motto, "never stand still", which will continue to shape the future of the German watchmaker's culture and business.