Prior to joining a friend for dinner at Kavee, I knew almost nothing about the restaurant.

I did not know it had only four tables and was in an exclusive corner gallery in the back of an upscale condominium.

And instead of being a typical Thai eatery serving age-old recipes as I had perceived, Kavee offers, as it defines, a well-composed culinary journey of modern contemporary cuisine.

The restaurant's name, Kavee, is Thai for poetry.

Opened six months ago, the 16-seater only takes customers with reservations.

Its single-option menu, featuring a nine-course degustation dinner, is revised upon the season or every three months. 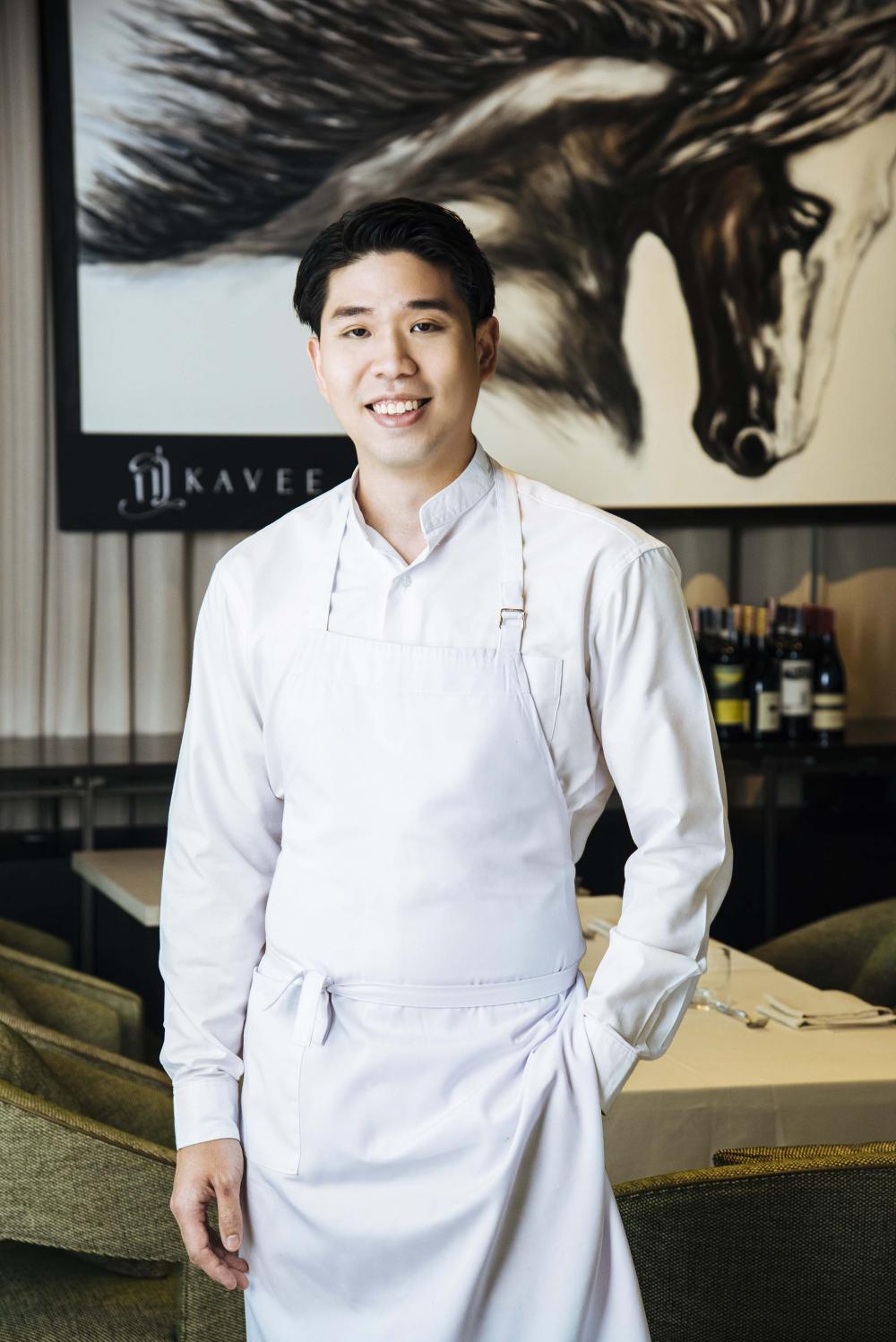 In brief, Kavee is, by all means, a chef's table restaurant.

Three tables were occupied on the Friday evening we visited. Other clientele, except us semicentennials, were in their 20s and 30s.

Helming the neat kitchen, set within an intimate small dining room, was a cordial yet soft-spoken chef Worathon "Tae" Udomchalotorn.

An alumni of the Culinary Institute of America and Le Cordon Bleu, chef Tae had worked at several Michelin-starred establishments including Benu in San Francisco, WD~50 in New York and Le Du in Bangkok.

Here at Kavee, his interpretation of modern contemporary cuisine takes a cue from both classic and innovative cooking techniques as well as an essence of Thai and Asian flavours. 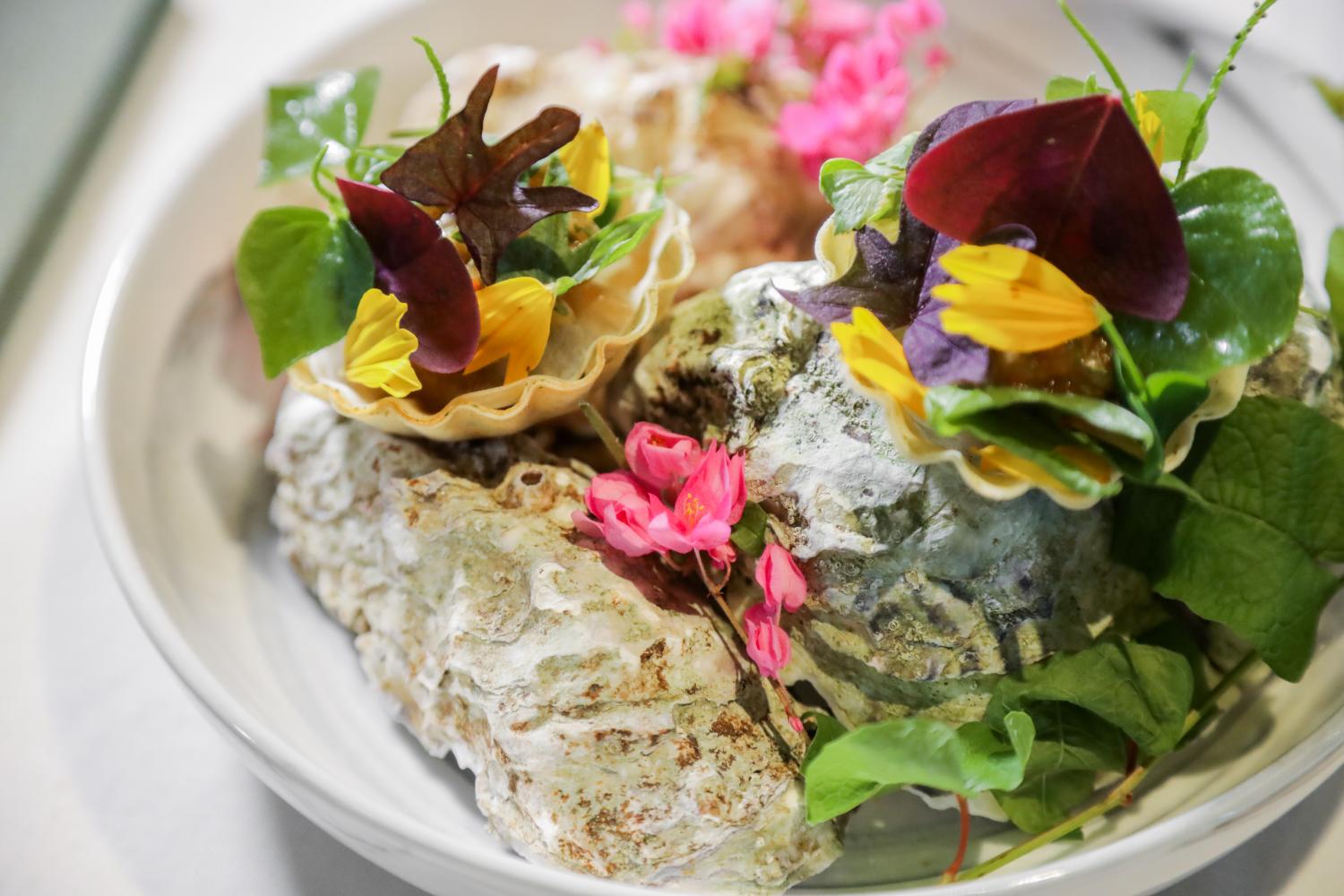 The current menu (2,890 baht per person), which runs until July, is a composition of at least 15 delicacies. Most of the dishes were creations of chef Tae. A few showcased the culinary creativity of his team members.

Upon seating, guests were treated to a warm and super-addictive loaf of brioche bread with house-blended soy sauce butter.

The first dish was Ostra Regal oyster from Brittany, France. The plumpish and fleshy oyster was served in a pool of pink radish olive oil capped with a frosty dollop of fruity-tasting sauce made from bai thammang, an indigenous herb from Southern Thailand.

The second course, a shrimp crudo tartlet, unified prime seasonal ingredients with the chef's favourite flavours from his childhood.

On a tiny crispy pastry cup was a fresh sizable prawn, marinated in citrus juice so the meat tightened and developed a pleasant crunchy exterior while the centre retained a superb, sashimi-like quality.

Giving the prawn a well-balanced enhancement was a Teochew-style sauce, a tasty emulsion of pickled turnip, ginger, coriander, garlic, fresh chillies, pepper leaves and sesame oil. The dish was a marriage of bracing texture and comforting taste.

A savoury cheesecake featuring velvety smooth foie gras terrine on a pie crust with apple gel face, fresh grapes and roselle meringue arrived next. I would give it a high score should the level of sourness be tamed. To me, it tasted more like a very zesty lemon tart than a duck liver.

The Hokkaido scallop fourth course was enjoyable thanks to the suppleness and naturally sweet taste of the shellfish and not the trimming which was said to be inspired by the characteristics of a Thai dish called khanom jeen sao nam. 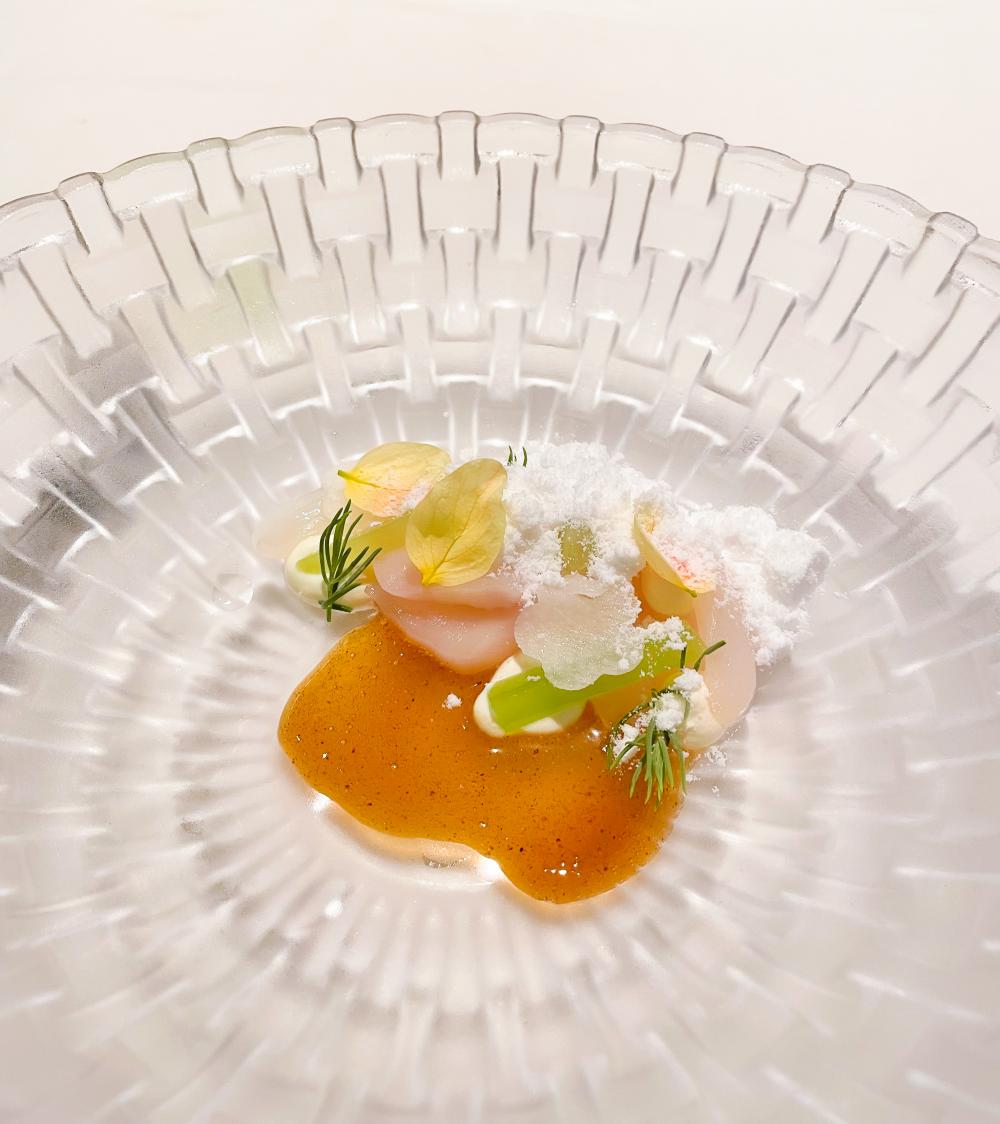 I just didn't find anything, taste-wise, from Kavee's creation that reminded me of it. Dressing the scallop, which acts as the fish balls part, was a hazy crossing of rambutan, coconut granita, cauliflower mousse and Mandarin orange peel sauce.

The dinner got back on a good track with the river prawn course. A wild harvest from Tapee River in the South of Thailand, the prawn, which was large in size, was cooked so perfectly it exhibited an extraordinarily plump and springy texture and delicate sweet taste. Accompanying the prawn were dollops of lemon gel, vanilla-spiced carrot and a creamy bright-orange sauce made with prawn tomalley and egg yolk.

For the duck course, Tae came to our table himself to apologise for the "not-so-tender" poultry due to the shortage of female duck and that he had to settle for the tougher meat instead. 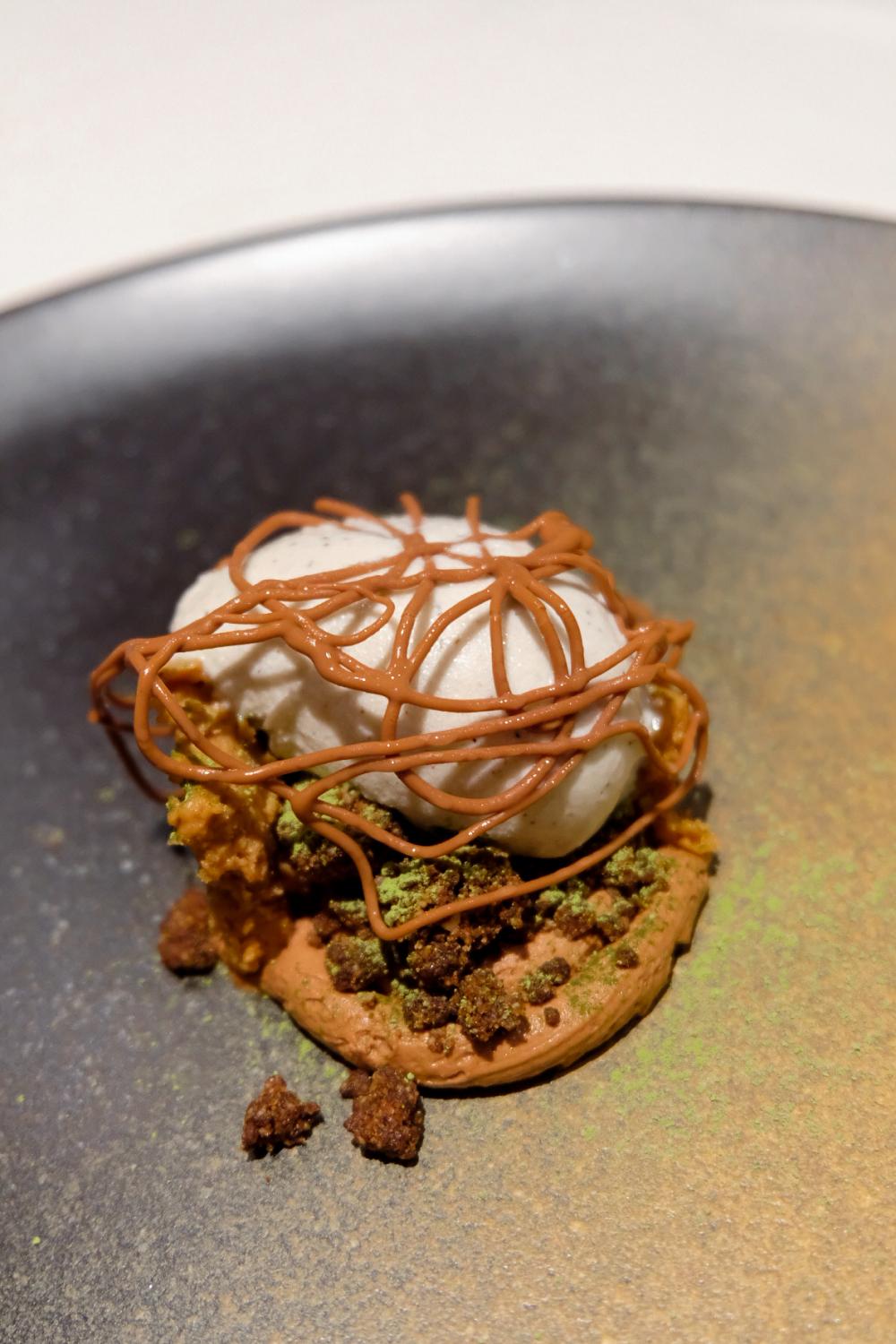 The dark chocolate truffle with peanut butter and coffee crumbles.

On the plate was a nice fillet of dry-aged, free-ranged Barbary duck, hay-smoked for two hours and roasted to a perfect medium rare with the skin glossy and crispy.

The duck was dressed with pan jus, plum puree, pickled mustard seeds and beetroot tuille, accompanied by confited potatoes dusted with leek ash. We later finished the whole plate thinking "what was he talking about?"

Impeccable and exceptional, it was one of the very few best duck dishes I've had in my life.

Kavee's rendition of a dinner's sweet finales is some of the most excellent in town. 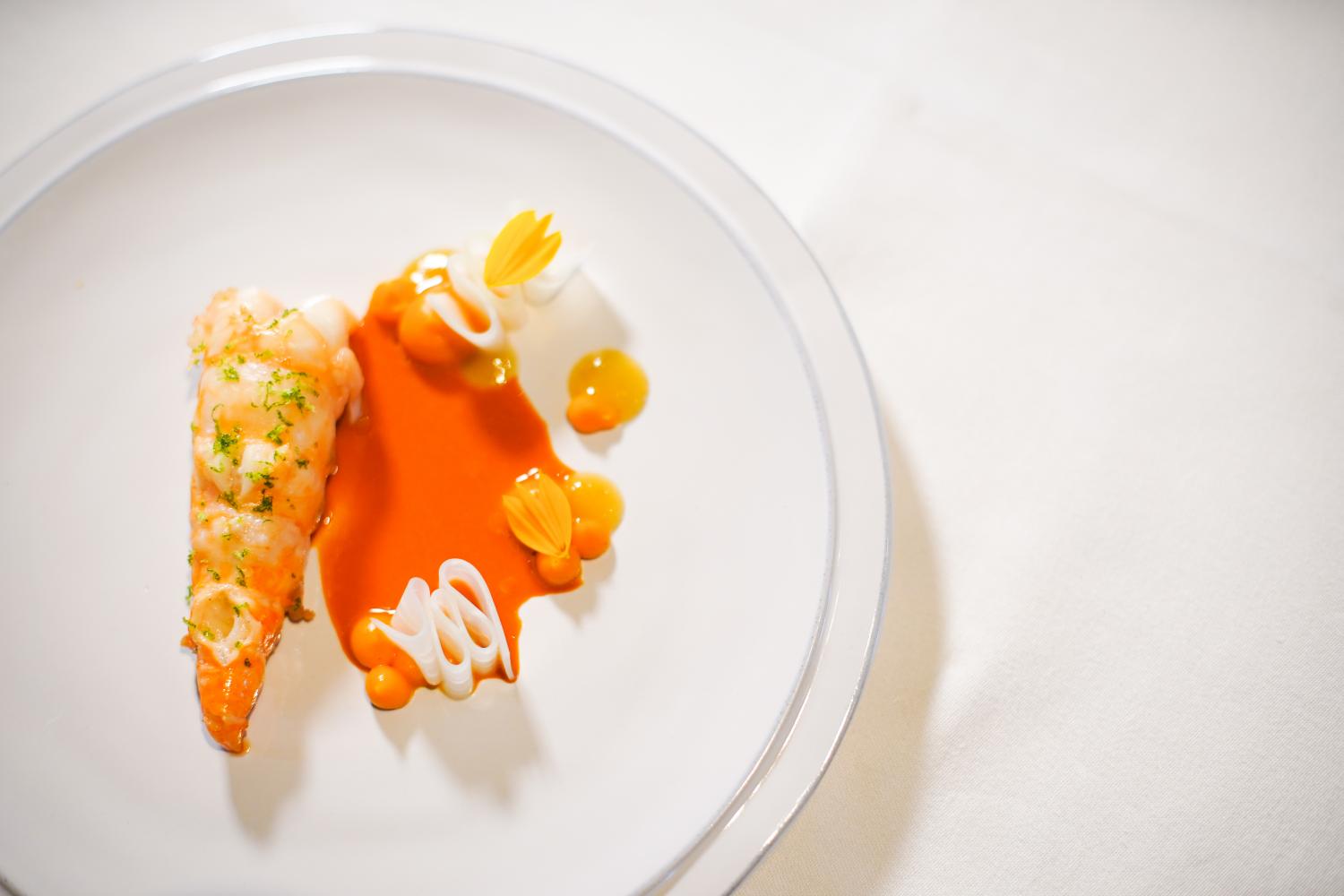 There was an orange granita with grilled pineapple, passion fruit jelly and coconut meringue. The latter was also spiced with rosemary and Sichuan pepper. The whole combination sounded strange but turned out a real indulgence to the tastebuds.

House-crafted mignardises were so brilliant I'd wish they have it available for retail. There was a mini choux pastry stuffed with wok-toasted black sticky rice cream; a chewy candy made with top-quality nam pla (fish sauce); and a strawberry jelly spiced with salt and chillies.

To match the exclusive setting and a rather experimental cuisine was a cosy service.