The sea breeze blew in as a group of visitors arrived at Mrigadayavan Palace, the former summer retreat of King Vajiravudh (Rama VI) in Cha-am district of Phetchaburi. After more than two years since the beginning of the pandemic, the heritage site remains closed for a restoration project that unveils traces of its early days.

The establishment of the summer palace from 1923 to late 1924 stemmed from the king's illness. King Vajiravudh, who suffered from rheumatoid arthritis, rested at the seaside retreat on the advice from his doctor. The king stayed here twice for three months in 1924 and two months in 1925 before he passed away.

Guests could walk up a tree-lined path where the king once travelled before reaching a green iron gate and two statues, which informally demarcates the residence of the royal family from that of his entourage and civil servants. Flanked by lush bush, a track leads to the beachfront pastel palace.

Erbprem Vatcharangkul, an archaeology officer at the Office of the Mrigadayavan Palace Foundation, said an excavation uncovered the original track built in 1923. When King Bhumibol Aduyadej allowed the Border Patrol Police to use the area, officers built the road over the original track, 30-40cm deep and filled with stone and reinforced concrete.

"The palace is one of the earliest buildings that adopted the Western technology of reinforced concrete. There is evidence that Italian architect Ercole Manfredi designed the palace, but when Chaophraya Yommarat came to supervise the project, he sent the blueprint to another Italian architect, Mario Tamagno, who made some adjustments and completed the construction in seven months," he said.

Walking further, a network of teak buildings sits on pillars and concrete floors. Erbprem said they can be divided into three groups. Samosorn Sevakamart is the outer two-storey open throne hall. Samutphiman is the central residence of the king, princes and male palace officials. Pisansakorn is the inner abode of the queen, royal consorts and female attendants.

"There is no trace of degradation, but structural decay from above. For example, tiles covering the roof of the throne hall were broken. The upper woodwork of the inner court's bathing pavilion crumbled. However, pillars and foundations can hold up the palace and remain in good condition. The complex stands on a coastal sand dune," he said. 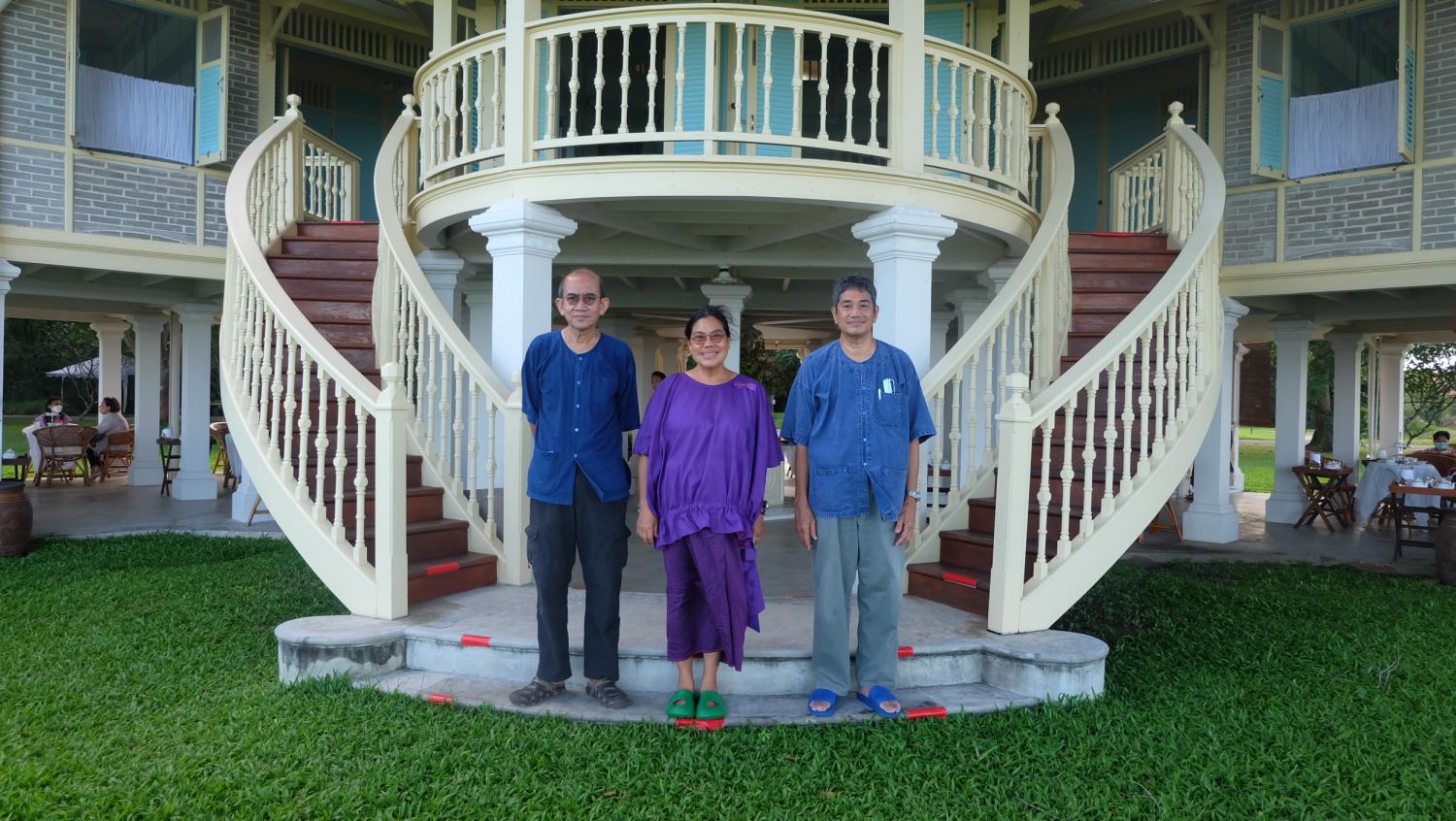 A gade tree more than 200 years old stands in a roundabout between Samosorn Sevakamart and Samutphiman. Erbprem said the construction and maintenance of the palace must make way for trees. A modular system allows each building to be relocated independently and therefore helps preserve nature.

"It is the king's intention. I think preservation in Thailand started here," he said.

The palace is located in Huai Sai, which literally translates as "the hog deer stream", due to the abundance of the wild animal. King Vajiravudh therefore named his new retreat after the Isipatana Mrigadayavan forest, the deer park in India where Lord Buddha gave his first sermon. In 1924, he declared the area a wildlife sanctuary. In 1981, the palace was registered as a historical site.

Chamuen Amorndarunarak recorded that the king did not allow the cultivation of ornamental plants on the premises. It finds an echo in the restoration project that eliminated invasive alien species, such as pine, sicklebush and mangrove, during the pandemic. Most native plants are halophytes (salt-tolerant plants), for example climbing vines and perennials.

Klaomard Yipintsoi, director of the Office of the Mrigadayavan Palace Foundation, said pine is dangerous to the ecosystem because "it can grow easily and die hard". Its root contains chemicals that inhibit the germination of native plants.

"After extensive removal, local plants are coming back," she said. 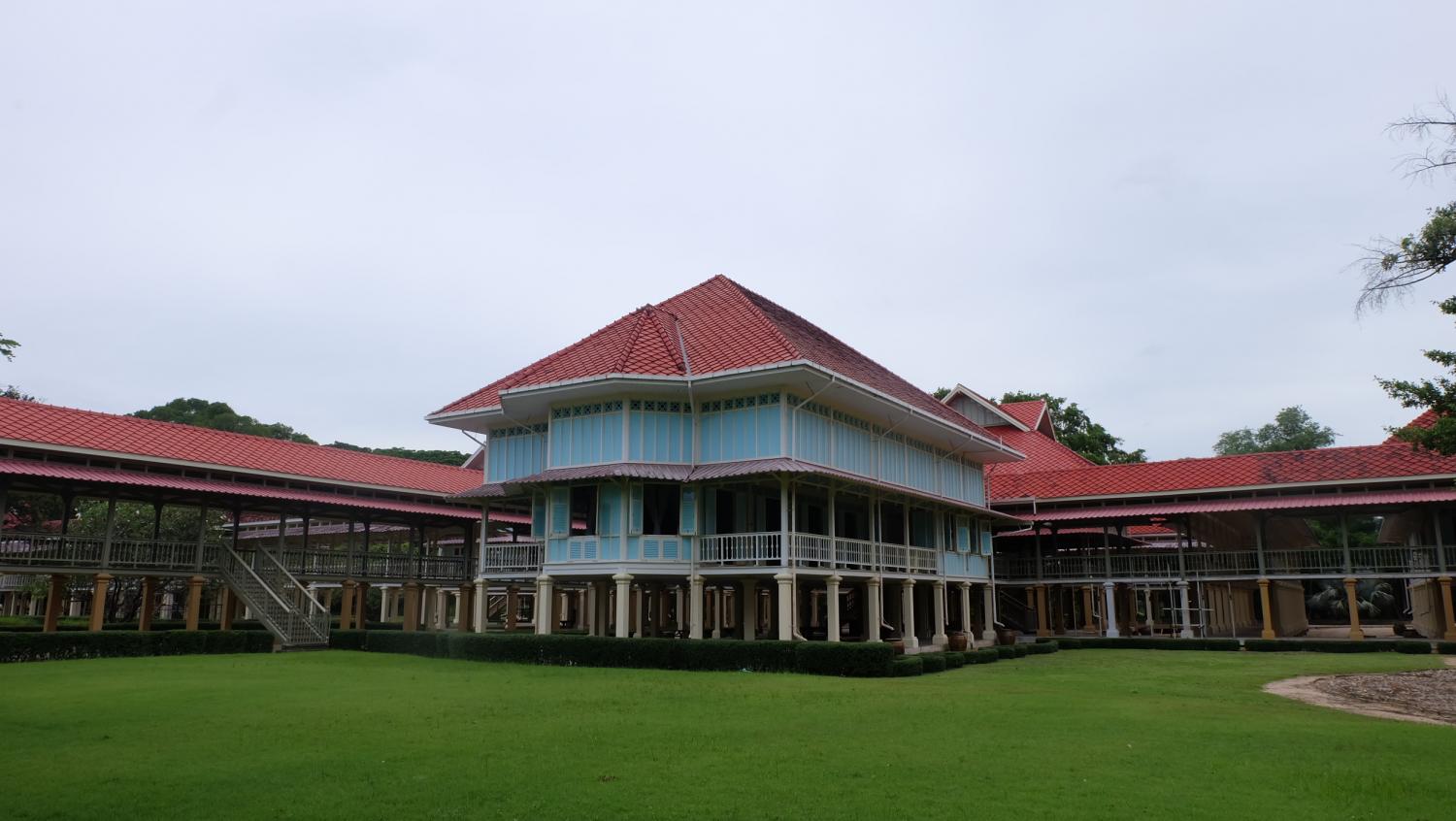 Samutphiman was the central residence of the king, princes and male palace officials. (Photo: Thana Boonlert)

Due to the stewardship of the heritage, Mrigadayavan Palace has become a living museum. Klaomard said when staff took up the job, there were not many artefacts and data, making it difficult to create an object museum. As a result, they decided to set up a site museum where they use the process of finding evidence to present knowledge.

"That is why we always dig, repair and plant and remove trees. The pandemic provided an opportunity to perform these tasks better," she said.

Staff are scraping wood surfaces to uncover the original colour of the palace. It was painted a Tiffany blue colour during the previous restoration because artisans based it on the inner court's room. So far, they have inspected over a thousand spots. An analysis found that celery cream (cream white), gold field (yellow mustard), antique avocado (olive green), and island house (light green) are original colours.

When restoration finishes, every building will look like the light-green dining hall of the king's residence. "It has totally changed my memory," said a visitor to the palace. Traditional Chinese characters were also discovered on a column. It is assumed that artisans engraved them on the wood pillar, but meanings remain a mystery.

Nevertheless, coastal erosion and other environmental challenges are threatening its existence. After tropical storm Linda struck the area in 1997, the government initiated a project to build structures in front of the palace to prevent coastal erosion. Other residents followed. Unfortunately, they have exacerbated coastal loss. 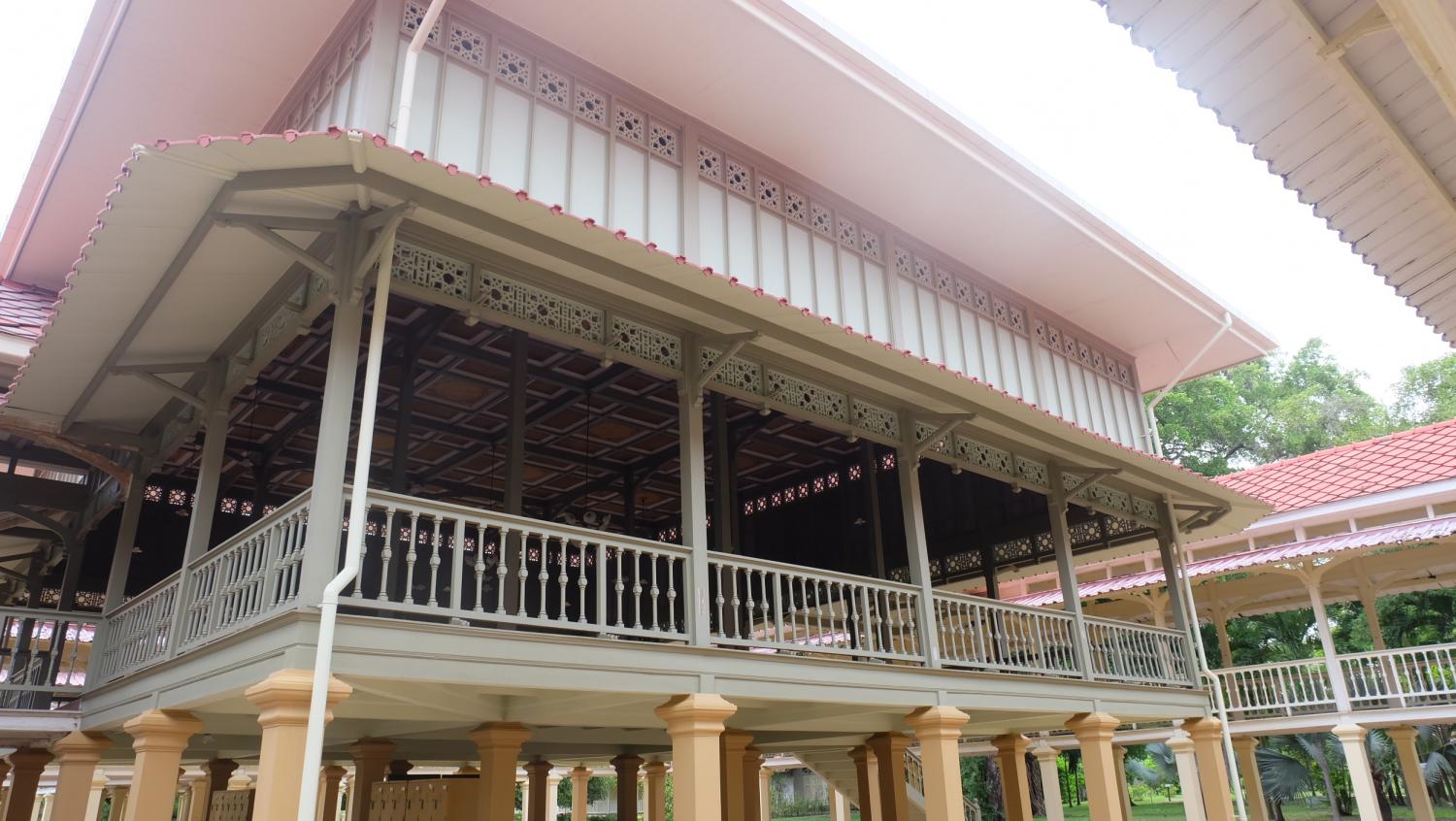 The dining hall of the king's residence appears in light green, the original colour. When restoration finishes, the tone of the palace will look like this. (Photo: Thana Boonlert)

Anond Snidvongs, an oceanographer, said these barriers were built without thorough knowledge of the coastal dynamics. When a big storm removes sand offshore, it will naturally return in two seasons. However, the construction of groynes, seawalls and many others have worsened the erosion of the northern coastline.

"Last year, a national marine coastal policy committee approved a project to remove some of these structures after a study conducted by Kasetsart University confirmed that they can be dismantled. For the first time, the state admitted a mistake and plans to make amends. The first phase of the project will begin next year," he said.

Still, climate change remains a long-term challenge. Anond said global warming causes sea water to expand and rise at an average rate of 2-3mm per year and definitely higher. While these existing barriers cannot mitigate the impact of climate crisis, a setback area ensures that the palace is invulnerable. 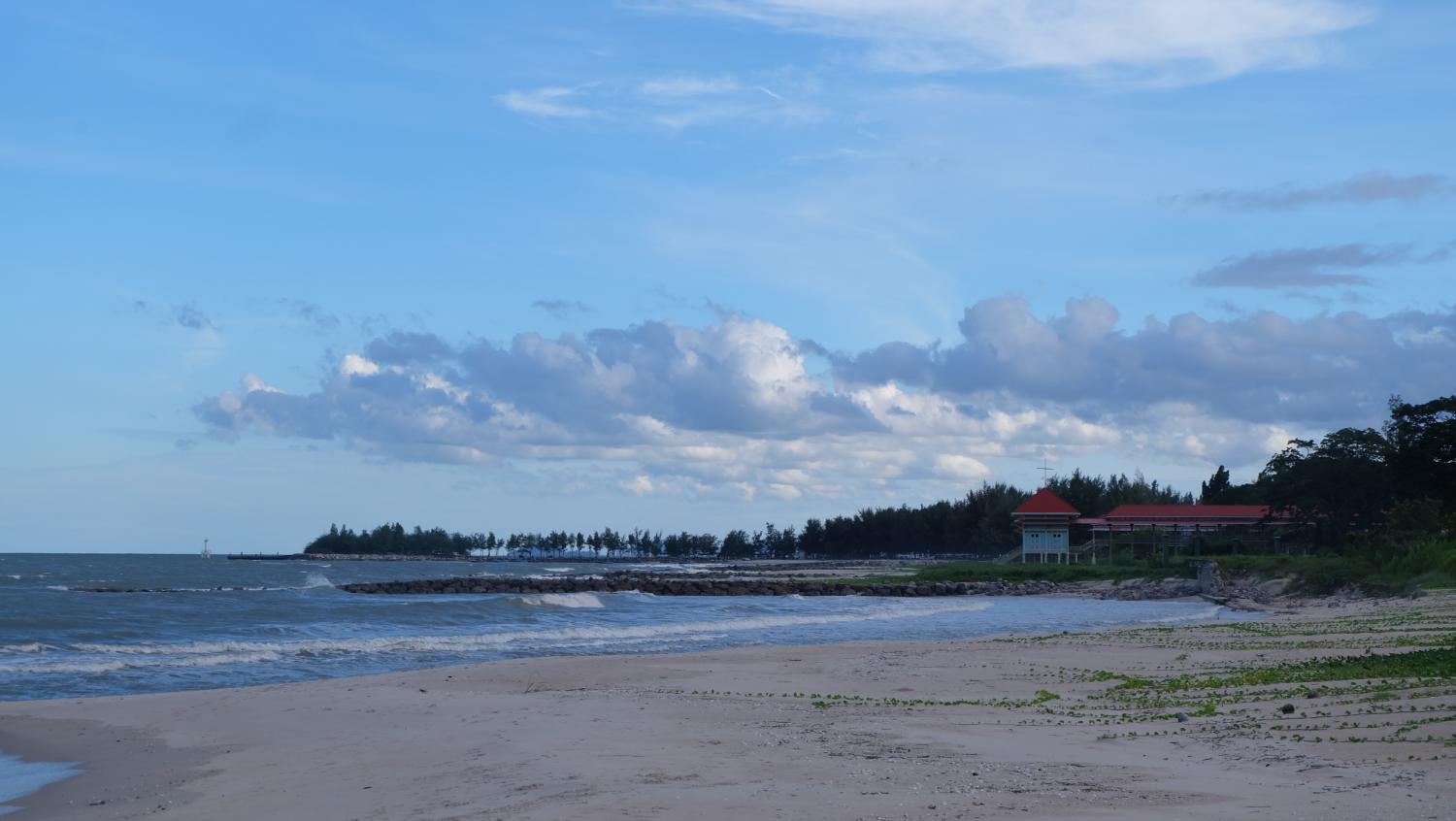 "It is more than 100m [from the shoreline]. Having a wide setback area will make the palace very robust and resistant whether it is sea level rise or change in coastal and longshore currents, waves and others," he said. "It will be much less vulnerable than any other places."

Mrigadayavan Palace will reopen in 2024 to mark its centenary. With special permission, a tour was held last month by the Media Centre for Arts and Culture, Thai PBS. 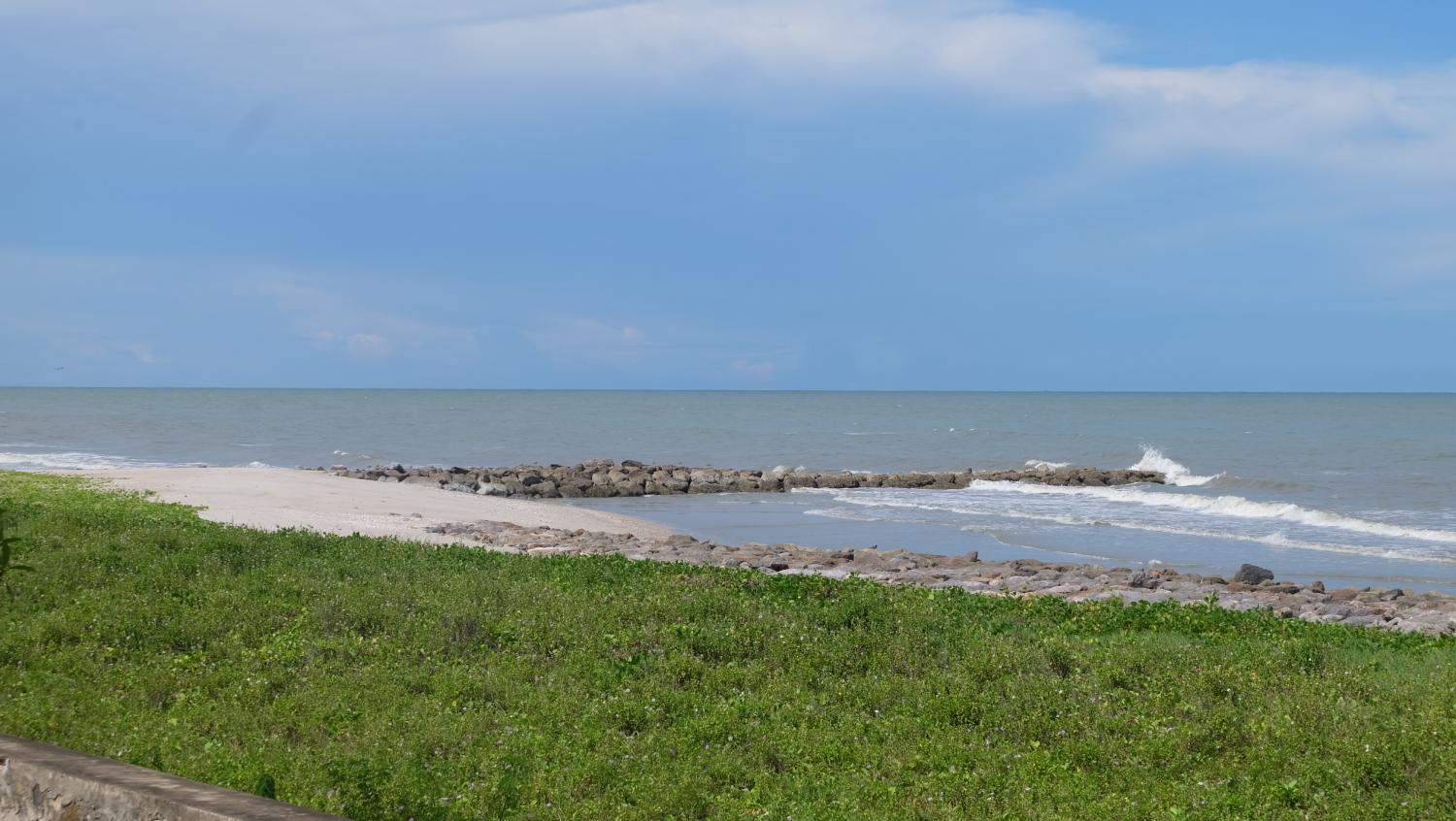