A series of dog attacks, some fatal, by pit bulls on people have raised questions about the safety of keeping these so-called ferocious canines as pets.

One publicised attack involved a family member of the dog owner, while in another incident the victim was a neighbour who was walking to the dog owner's house at night when the dogs, two pit bulls and two dogs of local breed, were out of their cages.

With their massive skulls and strong jaws, pit bulls make many people feel unsafe when they encounter this creature in public places, such as parks or walkways.

One woman told Life she feels that her safety is compromised whenever she sees this type of dog at the park _ and not even the presence of its owner holding onto a strong leash helps.

"I was so scared [when I saw the pit bull] I walked in another direction as fast as I could ," she said.

"Pit bulls are too powerful for the average person to handle. And if the dog is let loose and jumps on anyone, I'm sure you can guess what happens," she said.

"More importantly, we don't know if the dog is well trained or not. I would feel a lot safer if the dog was muzzled."

The pit bull horror stories have resulted in some owners abandoning their pets, giving them up at dog shelters.

Should we be scared of pit bulls? 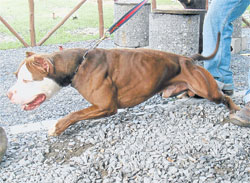 Giant was abandoned at a dog training centre. After being trained, he became a happy and healthy canine and much admired by the children. PHOTOS COURTESY OF PIT BULL ZONE CLUB

"We keep our pets on leashes when we're out in public to prevent a scene, like fighting with the other dogs. Pit bulls, like any dog breed, may show aggressiveness towards strangers."

Nathapoan blames a lack of responsibility on the part of the owners for the tragic incidents that occur involving pit bulls. He also noted that most pit bull attacks happen when the owners are away, leaving the dogs with family members or maids who aren't "authoritative" enough and, therefore, unable to handle the creature.

Pit bulls are a dominant breed. Besides, dogs naturally form a pack in the wild, he added. The innate behaviours of dogs can make the dominant dog feel more authoritative and seek to gain control when the owner is absent from home, and they will compete with one another to become the leader of the group. Also, it's not unusual for this type of dog to develop a competitive attitude towards other people living in the house when the owner is away.

''Pit bull owners should put their pets through obedience training early on and establish their authority over the dogs,'' said Nathapoan, who has over 20 years experience raising pit bulls. ''It's very important that all family members are able to keep the dog under control.''

An owner of a big pit bull, Vantana Smitr, said that whether the dog is dangerous or not depends on how it was raised. Hers is a stable, well-trained pit bull. When her pit bull would growl at a cat, she said, the dog would be given a firm command to stop. The dog would wait for a while, then follow the command.

''It's important to be able to control pit bulls using verbal commands. Make sure you use a loud and firm voice in order to make the dog understand you are in control and learn to respect you,'' said Vantana, who has raised pit bulls for over eight years.

Vantana believes there are a few reasons why dogs become aggressive or overly aggressive. One of them being provocation.

''How many times has some little boy throwed stones at a dog? Well, we will never know because no one cares about that,'' she said. ''But when a dog harms a person, people simply think of putting it down.

''Dogs are a man's best four-legged furry friend. But some owners who are selfish choose to protect themselves and put all the blame on the dog. Some owners abandon them or even kill the animal.

''If an attack arises, the dog owner is the problem. It has nothing to do with the dog,'' she insisted.

Pit bulls were first imported to the country more than 20 years ago when people who lived abroad returned to Thailand, Nathapoan said. As the breed became increasingly popular, people with little or no knowledge of pit bulls wanted to own them, which marked the beginning of the problem. 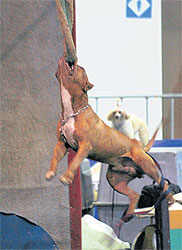 ''Many people want to have a tough dog to show off. Others, meanwhile, make their dogs fierce on purpose. And they have bred dogs to sell the puppies as profitable commodities. Worse, some irresponsible breeders try to sell badly bred dogs or crossed dogs,'' he added.

''It's the irresponsible owners who cause public hatred for this dog breed. They have no respect for how their actions affect the rest of society, particularly the true pit bull lovers. You know, our neighbours give us a cold look whenever they see us because they think our dogs hinder the neighbourhood's quality of life.''

Nathapoan is happy to provide advice to novice pit bull owners on how to raise their dogs if they don't receive information from the breeders.

''Avoid backyard breeders when you want to buy a pit bull puppy. Find a breeder with a good reputation,'' he advised.

He said a licence to own a dog is one possible solution that could help create a good balance between the pet owners enjoyment of raising pit bulls and the public's concern over safety.

''Those with a gun are required to have a licence. The same should be applied to owning a pit bull,'' he said. ''Letting your dog loose to rampage the streets and accidentally biting a passer-by, the owner should be held responsible and punished for it. Pet-related legislations in Thailand are very weak and rarely enforced,'' Nathapoan explained. ''It's an opportune time for owners to exercise responsibility through their pets so that we will see happy, healthy pets. And happy pets make people happy.''

Nathapoan also said the State should allow pet owners to take part in the drafting process if it is to launch a legislation.

''We know what the real problems about our pets are; some pet regulations don't tackle the problem at the root cause,'' he said.

Deciding on whether a pit bull is the right breed for you, Nathapoan said, people should thoroughly learn about the breed's history and innate behaviours before owning one.

''First ask yourself what a pit bull is and why you want to have one. And ask your family members if they all like this particular breed as well,'' he urged.

''A well-bred pit bull can be intelligent, playful, loyal and useful in sporting activities. Raised irresponsibly, however, pit bulls can be nothing but bad news.

''For pit bull lovers, if you want to convince the public that your dogs are not killing machines, train them, and take them out to public gatherings where dogs are welcome.'' 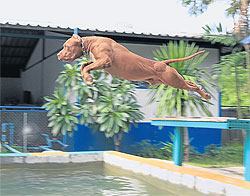 The Pit Bull Zone Club now has over 5,000 members. Every Sunday, the club usually arranges a social club training session at a dog training centre on Krung Thep Kritha Road, during which the bond between a pit bull and its owner is strengthened through fun activities like running, swimming and obedience training. Besides, facilities are provided free of charge.

Many countries have had dangerous dog laws and rigid enforcement ranging from bans to muzzles or leashes, as well as a requirement for all pit bull owners to purchase expensive liability insurance before they can get a dog ownership licence.

In Thailand, according to Dr Pranee Panichabhongse, senior veterinary officer at the Department of Livestock Development, importing American pit bulls has been temporarily banned since 2005, and the dogs that are raised now are those bred in the country. These dogs, together with bull terriers, Staffordshire bull terriers, Rottweilers and Fila Brasileiro (Brazilian fighting dogs) are on the controlled dogs list in Thailand.

''Owners of these controlled dogs, like other pet dogs, are required to register their pets with the city's local district office,'' said the veterinarian. ''The law requires that the dogs must always be on a strong leash and muzzled when in public areas.''

The senior veterinary officer agreed that pet regulations in Thailand are not strictly enforced, and the sight of pit bulls with no muzzle on the street is quite common. She insisted that pit bull owners should have their dogs implanted with a microchip _ a practice required by the pet control law. ''So, we can track down the owner if the dog is on the loose,'' she said.

''If you don't know much about this breed, don't get one. It might create many problems,'' she warned.

ORIGIN OF THE PIT BULL

Pit bulls are descended from the old English "bulldogge" _ a big, tenacious breed in brutal sport of bull baiting in the 19th century that has now become extinct. With a concern about the offensive game, the bull-baiting was then banned in England in the early 1830s. To fill the void, people however matched two dogs to fight one another in a combat.

To this end, a new breed of dogs was then specially bred to produce winning fighters for this pastime. Dog owners started producing a dog that combined the athleticism and tenacity of the bulldogge with gameness and agility of terrier. These cross-bred bull and terrier became famous for pit fighting in England and later in the US. To preserve the new breed's distinct breed, the dogs were bred only to dogs of the same cross.

In the mid-19th century, this new bred cross was imported to the US and was much admired. However, the dogs have been mistreated and poorly bred for criminal purposes like dog-fighting and guard of the drug dealers. The mistreatment, cross-breeding and training for aggressive behaviour have led to many incidents between these animals and people.

There are several types of dogs that are called "pit bull". These include the American Pit Bull Terrier, American Staffordshire Terrier, and the Staffordshire Bull Terrier. All of these dogs share common ancestry but have been bred for different breeding criteria. 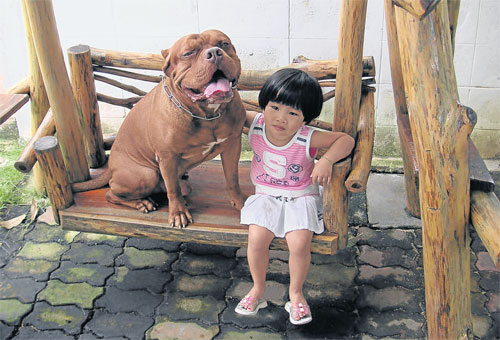 Pit bulls can be loving companion and family pet.